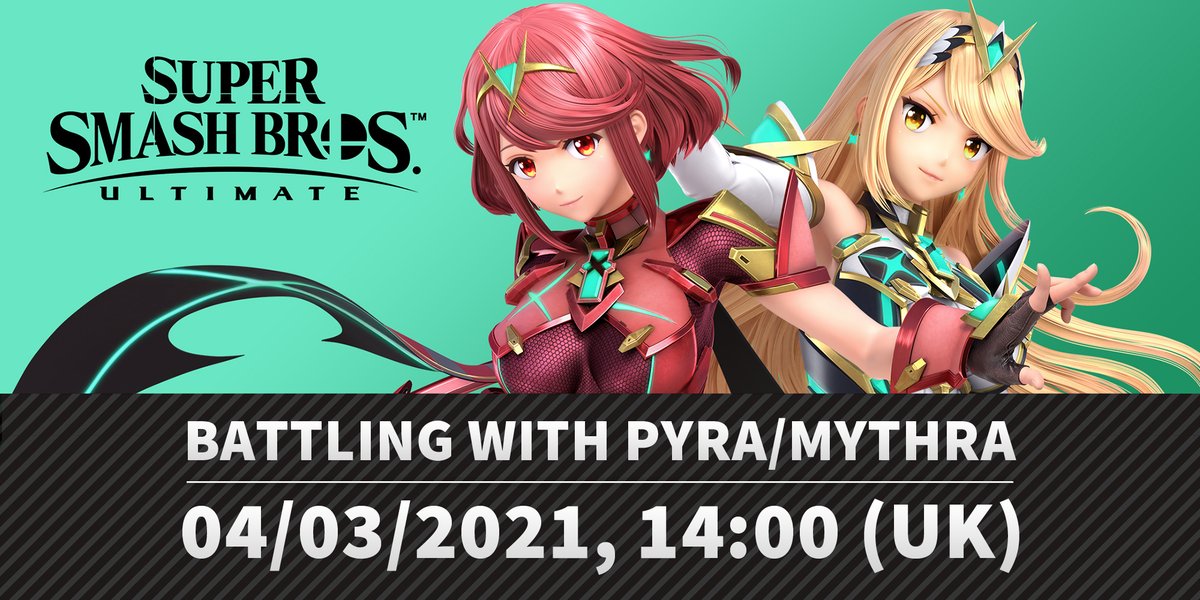 Last week, a major Nintendo Direct aired online. In that Direct it was revealed that The Legend of Zelda Skyward Sword would be remade in HD for the Nintendo Switch, that Mario Golf would see a comeback with Mario Golf: Super Rush, and that Splatoon 3 would be released sometime in 2022 among other announcements.

It also revealed that the next DLC fighter for Super Smash Bros Ultimate would be a tag team of Pyra and Mythra from Xenoblade Chronicles 2, who would be added to the game in the next month or so.

But we didn’t hear more than that, since actual mechanical info about the game is something saved for its own presentations, not general Directs as a whole.

And as it turns out, that’s exactly what we’re getting next month! Yep, like with Min Min, Steve and Sephiroth before them, Pyra and Mythra are also getting a full length presentation going over their moveset and abilities, which will air online on March 4th this year. Here’s the announcement about it from Nintendo UK on Twitter:

Tune in on 04/03 at 14:00 (UK time) for an in-depth look at the new #SmashBrosUltimate DLC fighter, Pyra/Mythra, with director Masahiro Sakurai. He will also reveal the fighter's release date!

As you’d expect, it’s the usual 35 minute detailed looked at how the characters work in game, and will explore both their movesets and various abilities to the fullest extent. There won’t be any new fighters revealed there, but it’ll be neat nonetheless, and likely reveal plenty more elements of the characters and their supporting content (stages, music, spirits, etc) that we’d otherwise not get to see til release date.

So check it out. You can find the times for the presentation in the table below, and you’ll be able to see our liveblog on the matter on this site too.

Either way, what do you think about this? Are you excited to see how Pyra and Mythra play in Super Smash Bros Ultimate? When do you think they’ll actually be added to the game?