When it comes to reality breaking glitches, there were quite a few of them in the Legend of Zelda Breath of the Wild.

There was World Overload, where entering and exiting Hyrule Castle 100 times broke everything. There was the Lizalfos Curse, where pushing a sleeping Lizalfos off a pillar broke the laws of physics.

And there was the Hinox Curse, where pushing a Hinox into a waterfall had similar results.

They all had interesting effects, and all were super fun to mess around with.

Yet they also all had one obvious limitation.

Namely, you were limited in where you could use them. Hyrule Overload only worked in the last battle.

But now there are two NEW reality breaking glitches in town. Ones that can be done ANYWHERE there’s water in the game.

Those being, Collision Overload and the Boomerang Curse. And to say these are overpowered is perhaps the understatement of the century. Take a look:

Yeah, you saw that right. Link literally stood in front of a Silver Lynel and took every single attack it had going without a scratch. He also completely ignored that Molduga charging towards him…

And in another part of Hyrule Castle, managed to shrug off a nigh endless barrage of Guardian lasers too.

Because Collision Overload completely disables all interaction between Link, items, objects and enemies. No one can do any damage to anyone else, under any circumstances.

It also lets you walk underwater in shrines and on the overworld: 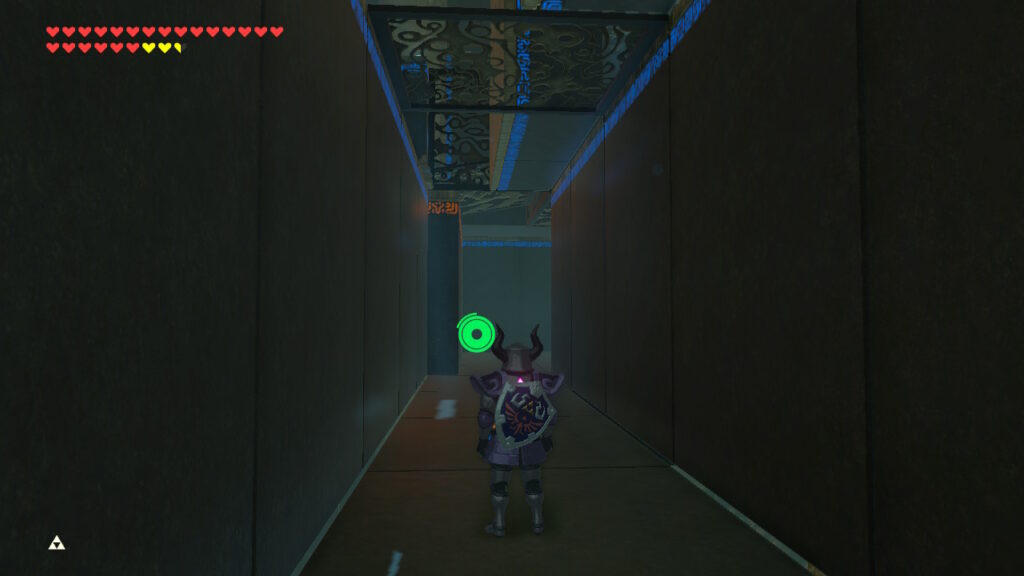 Just going for an underwater stroll in a shrine 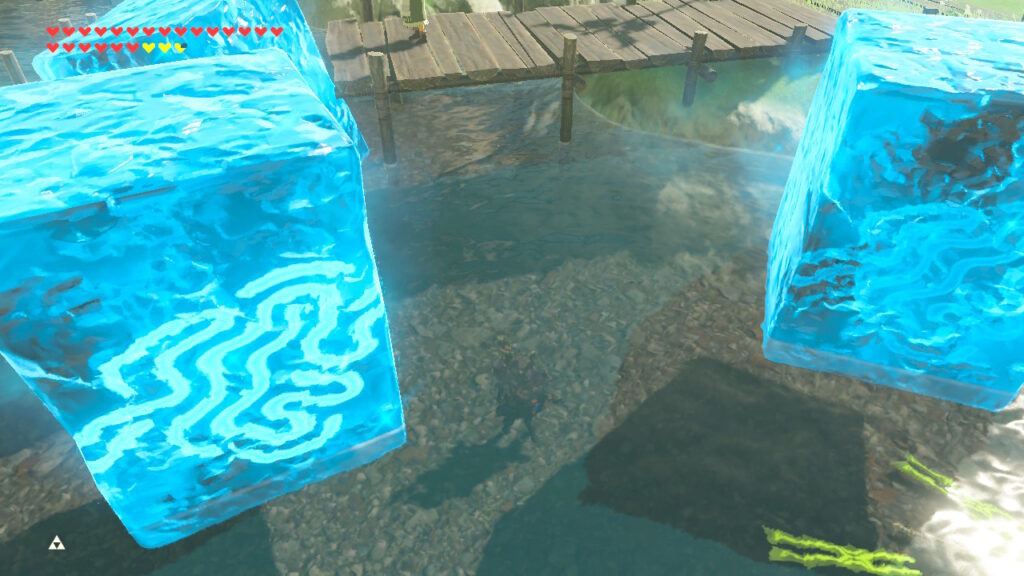 Just going for an underwater stroll in Hateno Village

So it’s a pretty interesting glitch all round. Here’s how to activate it!

Starting with our video guide. If you prefer that, you can watch it here: 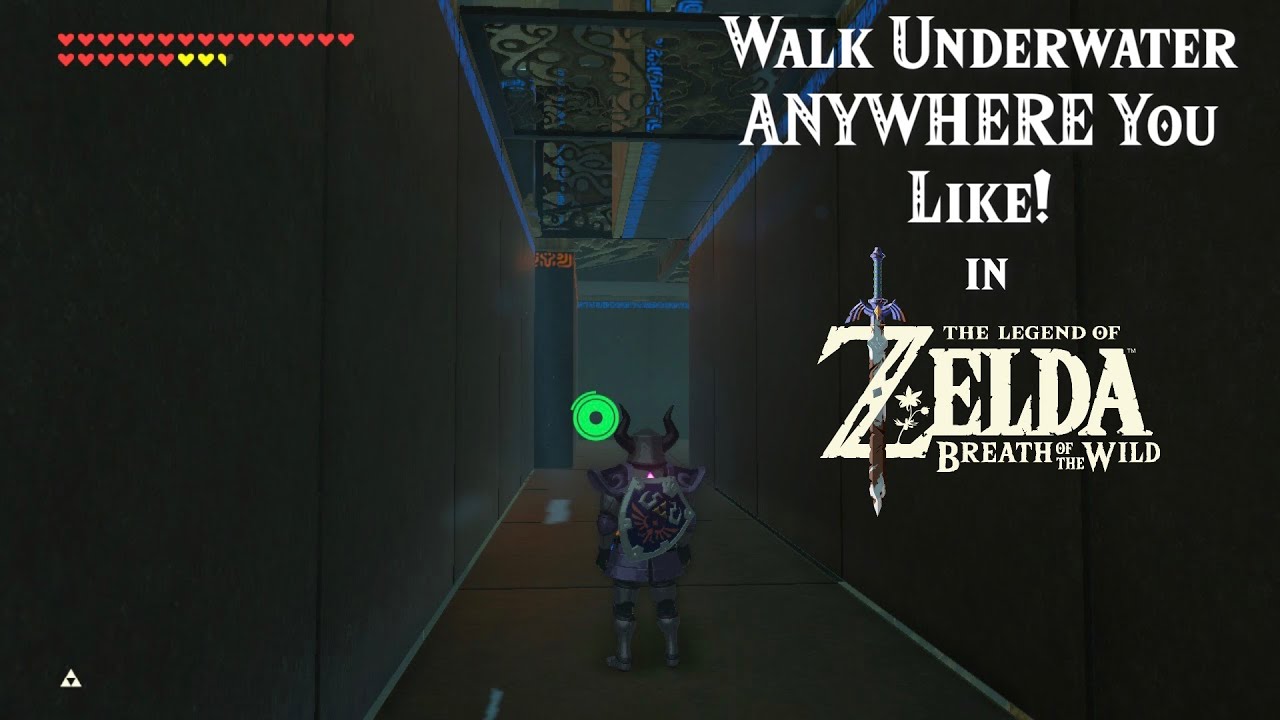 If you prefer text on the other hand… keep reading!

Then, you’ll need to aim a shock arrow on one, and drop the bow from the inventory while it’s active. 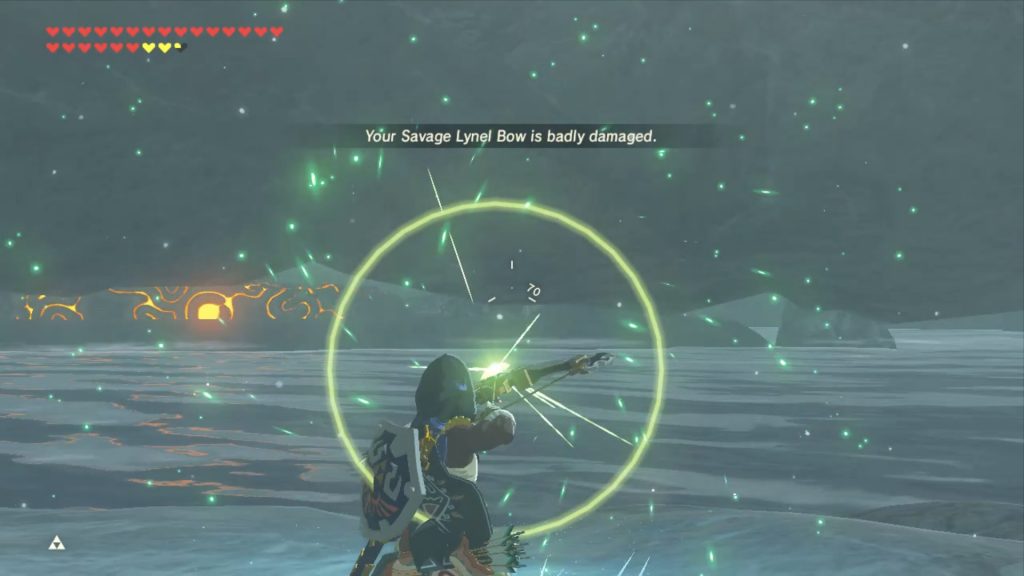 Aim a multishot bow with a Shock Arrow equipped 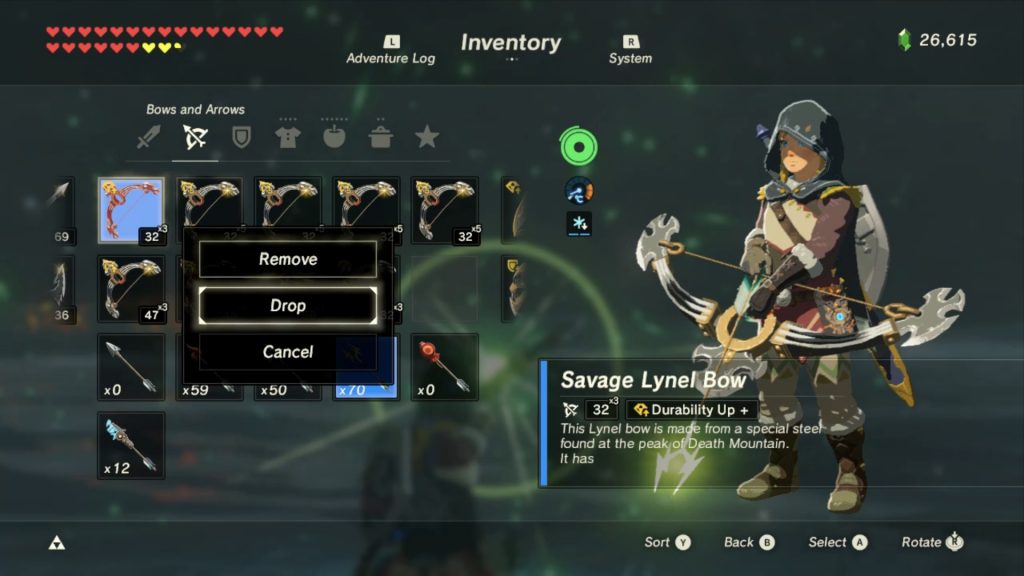 Drop the equipped bow from your inventory

Repeat for the other bows to overload the game. 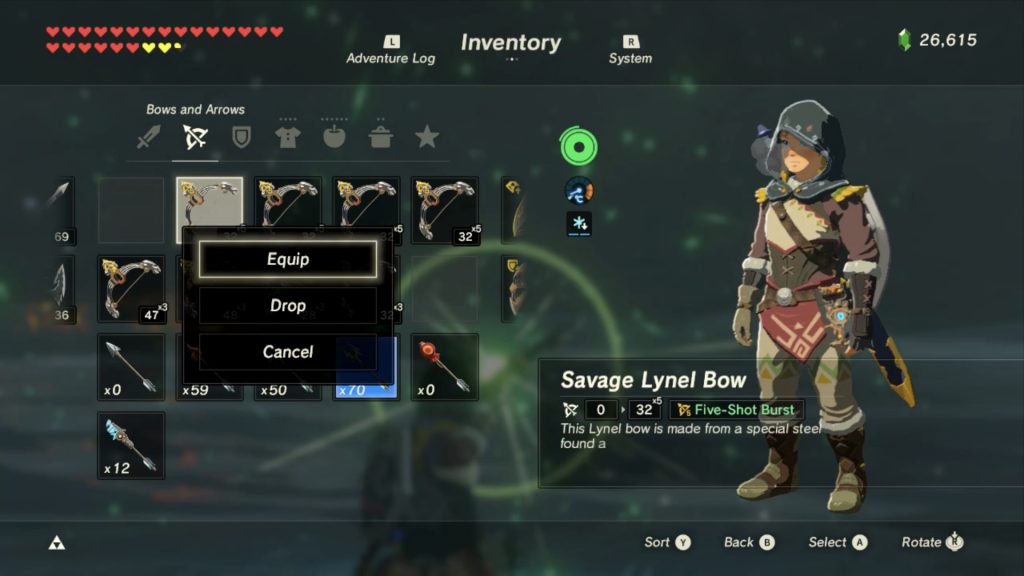 Then switch to the next bow and repeat the process

Now, desync your weapons. You can do this by equipping a weapon in the quick change menu, then changing in the inventory or menu without it changing on Link’s model. 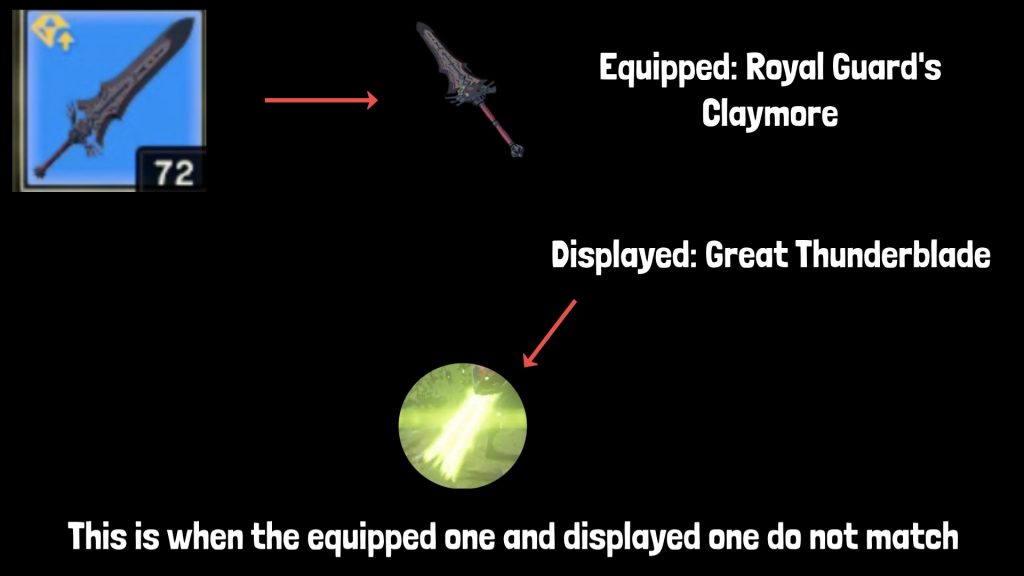 Take said desynced weapon and throw it into some water. 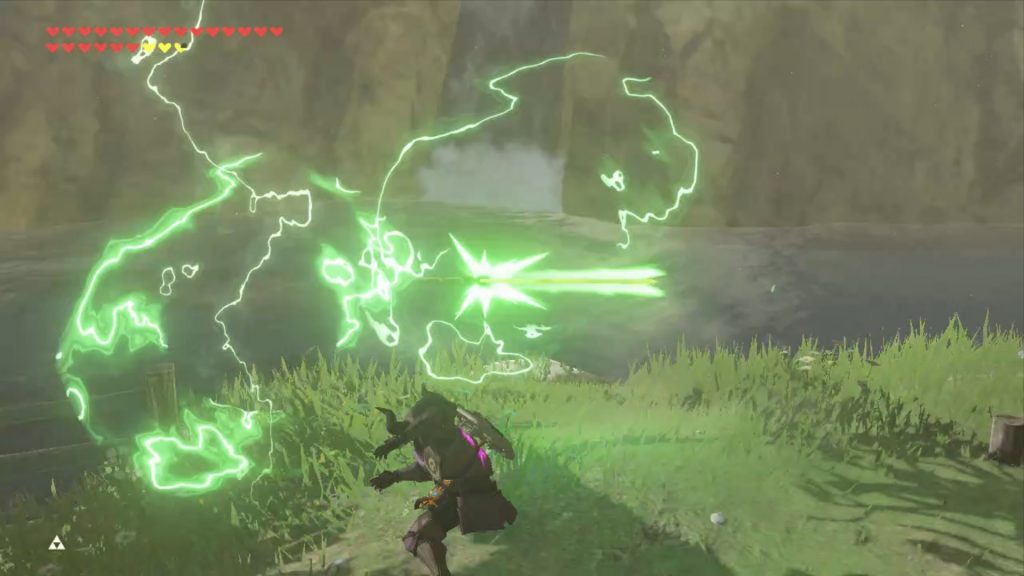 Then repeat the process. You’ll have to do this with about… 200 cloned weapons.

As you get close, the weapons will act VERY strange. They’ll start skimming the surface in an almost corkscrew type motion, with sparks coming out everywhere. It looks kinda pretty to be honest. 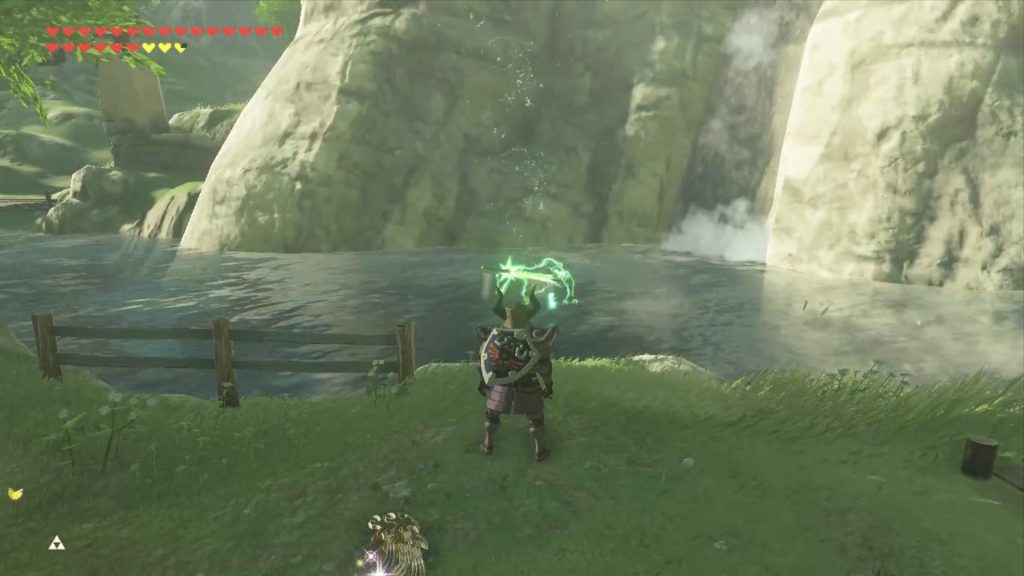 When weapons start skimming across the surface, you know the glitch is kicking in

Regardless, eventually you’ll notice the weapons will stop interacting with the water altogether. Congrats you’ve done it! The game is now overloaded!

Once weapons stop interacting with water, drop in and you can walk down there too

In this state, a few things are different:

For starters, Link, items and enemies now do not interact with water at all. They can walk around underneath it, light or use fires and bomb arrows underwater, use runes underwater, etc. In shrines they can even get the camera to follow them down there too, opening up all kinds of new passageways and shorcuts! 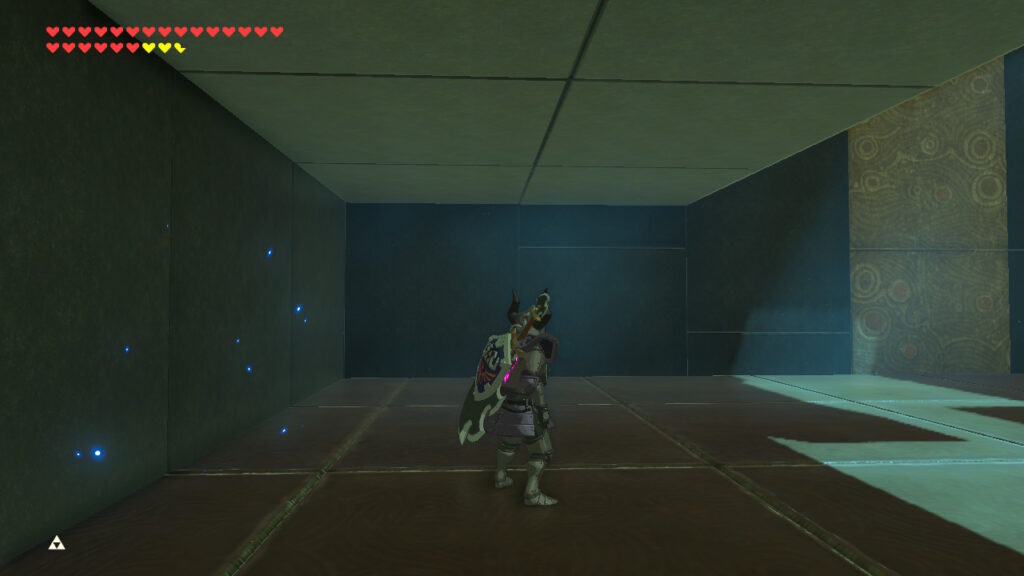 Where is this location? Oh, you can’t usually reach it without going underwater…

They’re also now invulnerable too. Both Link and his enemies can’t hit each with other attacks, lasers and arrows go right through them, hell even the bombs from your runes do nothing to anyone, even at point blank range. It’s pretty amusing actually!

So yeah, that’s already pretty insane as is.

But the craziness doesn’t end there. No, if Link uses a boomerang underwater in the right way, sometimes the so called ‘Boomerang Curse’ can kick in too. 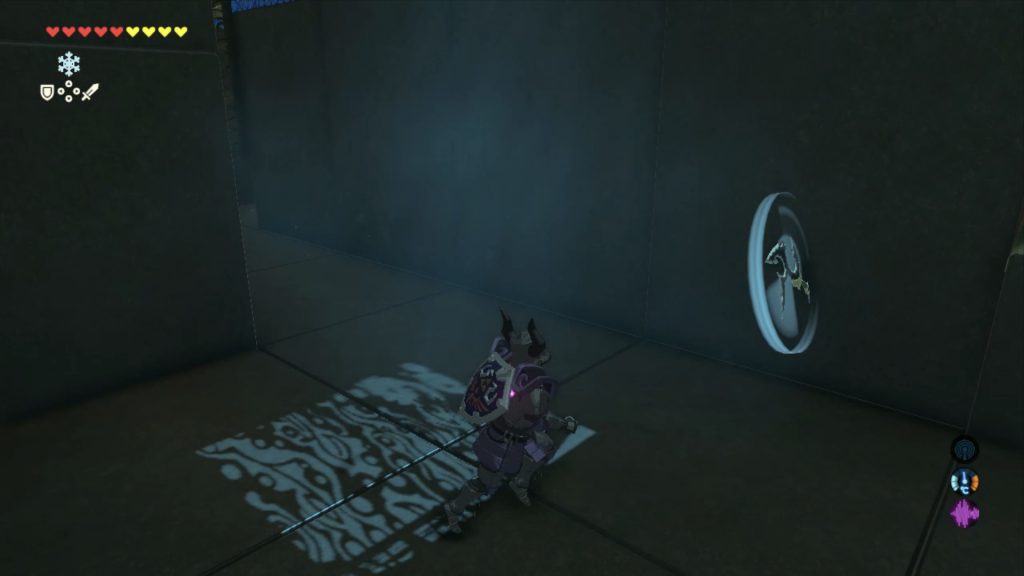 Of course, the boomerang itself will act glitchy underwater too

This is basically identical to the Lizalfos and Hinox ones mentioned earlier, and causes enemies and objects to rotate around in all manner of unnatural ways.

He can also break reality in about half the game’s shrines, Vah Ruta, the Final Trial, Hyrule Castle and literally anywhere else in the game with more than about an inch of water. It’s pretty ridiculous to be honest, and changes the game in so many ways it’s almost uncountable.

So go and test it out Breath of the Wild fans. It’s a great way to break the game even more, and one which is almost certainly has a ton more interesting effects to investigate in future too!