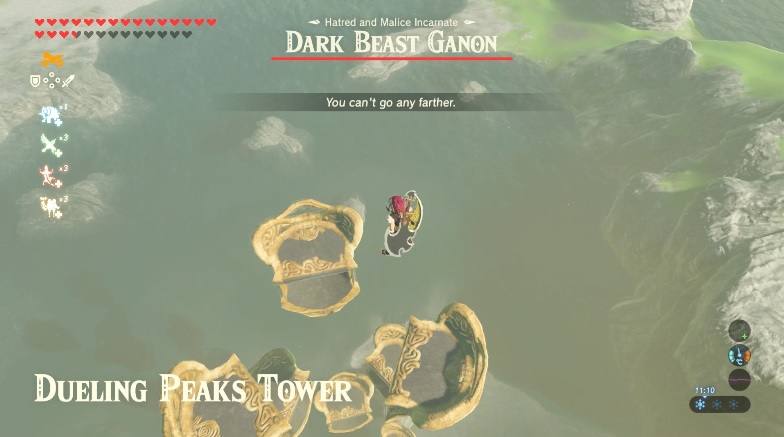 Ever since its release back in 2017, Breath of the Wild has seen quite a few game changing bugs found by players. These have included the Lizalfos Curse, which breaks the laws of physics, the (unfortunately now patched) World Reset glitch which allowed for item cloning and Korok Seeds, and the various members of clipping that let you escape the Trial of the Sword and skip the whole thing.

But now, thanks to a Japanese user by the name of Bot__W, now there’s another one. One with effects that will change Hyrule forever.

This is the World/Reality Overload glitch. And it is perhaps the most broken thing ever found in Breath of the Wild.

So how does it work? Well basically if you keep entering and re-entering Hyrule Castle after escaping the final boss battle, the game eventually starts to lose track of things in the world, and struggles to spawn in necessary elements. It’s unknown quite why this occurs, but rumour has it that somehow, spawning Beast Ganon over and over somehow overloads the game, presumably cause it wasn’t meant to be possible.

And since in the final battle Blood Moons are blocked from occurring, that means the game can’t fix the memory leak by forcing one to occur, leading to a world that’s more and more screwed up and where every little element is falling apart at the seams.

Here’s the full sequence of steps if you want to try for yourself:

Plus a handy video:

The effects of this vary, and depend on just how many times you went in and out, how much you dropped on the floor, how long you messed around, etc. But they basically come into two categories; the minor type (which almost always occur) and the major type (which require the game to get really, really screwed up).

For the former, some effects you’ll see in Hyrule include:

Trees not being cut down correctly when you attack them. Exactly how this is messed up is seemingly random, but we’ve seen everything from Link’s weapons going right through the tree like it was a ghost to the tree just exploding on contact and the trees graphics going away while leaving the collision data intact. The latter lets you do things like climb invisible trees:

Runes not working. This is very area dependent, but if the game is too overloaded, your runes will often not work at all. Magnesis won’t be able to grab anything, Bombs won’t appear, the Master Cycle Zero will either immediately disappear or fail with the same message as in the desert, etc:

Sheikah Towers don’t appear correctly either. Okay, they never did, since escaping Dark Beast Ganon basically nukes the pedestal and everything associated with it, but when this glitch is active… well 90% of the tower turns invisible and leaves just platforms hanging in the air. It looks ridiculous:

As mentioned before, you often can’t hold items, instead holding invisible objects: 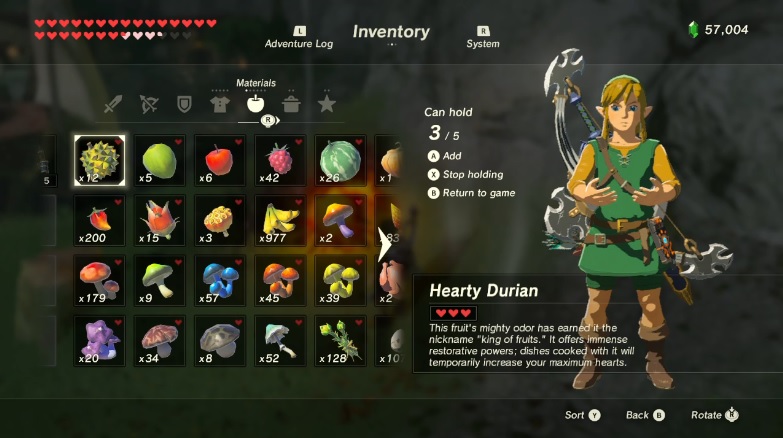 And the game struggles to update your current sword, bow, shield or armour set if you try and change it while the glitch is active.

In turn, this means you can use the bug like the cloning glitch in the Gerudo Desert to clone items or ‘send the Master Sword back to the forest’. Just go into a really busy area (Zora’s Domain, Goron City, Korok Forest, etc), change shield/bow/sword from an already equipped weapon to a strong one, and drop it. You’ll drop a clone of the stronger one you were already using, which will overwrite the one in your inventory.

Cue the whole list of Hylian Shields, or a nice full set of Savage Lynel Bows ready for playing around with!

On the other hand, if you try this with certain weapons and bows and it doesn’t work correctly (like with the Bow of Light), it’s possible to outright lose weapons altogether, with said weapon just despawning the second it hits the ground. However, this will often not affect Link’s actual held item, so you can have situations where the weapon Link is using is not actually in his inventory any more.

You can also (amusingly) have a situation where Link is fine, but his clothing hasn’t updated in the menu, leaving him shivering or burnt out despite wearing the correct armour set in game:

Random objects also won’t appear on the overworld at all. These can include Goddess statues, bosses like Stone Talus/Molduga/Hinox and random structures usually present in Hyrule:

Finally, there’s also a good chance the game will softlock in this state. Usually from you shooting an arrow too far (bomb arrows are especially bad here), or approaching a complex area where the event actors didn’t load correctly (like Gerudo Town or a Divine Beast).

And those are generally the minor effects. They’re already pretty varied, and there are no doubt thousands more than this, but those occur pretty much the second you activate this glitchy state.

However, if you play your cards right, more interesting bugs can occur. For instance, Dark Beast Ganon… can sometimes just disappear altogether.

This leads to a situation where the barrier around him is completely invisible.

As well as where Hyrule itself is eerily quiet once again, since neither the boss music or Zelda’s narration is stuck playing in the background:

And this is just the tip of the iceberg. Oh yes, some things we’ve seen people not have load include:

Plus most interestingly of all… This:

Yep, you saw that right. In some situations, the event that kicks you out of Gerudo Town if you’re wearing the wrong clothing doesn’t run at all when this glitch is active, meaning you can stroll in wearing whatever the hell you like. Want a quick photo in Riju’s palace while Link is dressed in his boxer shorts? Go ahead. Feel like taking on the guards with the Phantom Armour or having Link hold a picnic inside the Voe marriage school? No problem! It’s all possible now!

Oh, and apparently that’s not all either. No, mini games can stop working if the game is overloaded too.

So yeah, nothing is safe from this glitch. Whether its enemies or mini games, bottomless pits or clothing rules in Gerudo Town, overloading the game can break each and every one of them past the point of no return. It’s a fascinating bug, and one that definitely warrants further investigation.

Give it a try and see what happens!

Why does this glitch occur?

We don’t really know. Our theory is that Dark Beast Ganon isn’t meant to appear and disappear like other NPCs, so he doesn’t get despawned properly and the area tags for the battle remain. Eventually, they just stack up so much the game overloads.

Can I influence it outside of that?

Sure. If you activate the glitch, then doing things like chopping down trees will also overload the game more and more. So if you want to see the effects across Hyrule, well just turn into Link into an anti-ecowarrior gone berserk and you’ll soon see ‘em for yourself.

Does this glitch carry across saves?

Not as far as we know

Can you teleport with the glitch active?

No. By default the final battle escape disables teleporting, and if you do enable it, then teleporting turns off/resets the glitch again.

Is this glitch exclusive to the Nintendo Switch version?

Not as far as we know. However, this needs more testing.

What areas are most likely to glitch out here?

Generally, it’ll be areas with a lot of detail to them, like towns and major landmarks. Based on this (and our research in general), we’ve found the following areas are the most ‘unstable’ when this glitch is active:

Interestingly, Rito Village has few problems, and quite a few other landmarks are remarkably stable in this state too. For example, we didn’t experience as many issues near an Ancient Tech Lab (in Hateno or Akkala), near the Akkala Citadel, near most stables (though dropping items, chopping down trees and lighting fires can push it over the edge), near any of the three Great Skeletons/Leviathan skeletons or near most Sheikah Towers in general. These are all places where you’d think issues would occur, but they generally don’t.

Can this glitch be used outside of the final battle?

Probably not, but we’re still testing that. Skipping the intro cutscene stops time from passing, prevents normal Blood Moons from occurring and makes Panic Blood Moons nearly impossible, but we haven’t managed to replicate the bug in this state, even with things like the Twilight Bow at our disposal.

Doing it in normal gameplay would just set off a Panic Blood Moon and clear the issues again.

Will this damage the game?

Again, it’s very unlikely. The effects of said bug do not carry between saves, and (unless you go far out of your way), you can’t save in the final battle anyway.

What can I do if I find anything else out about this glitch?

Tell us about it in a comment, on social media or on the Gaming Latest forums today.