The Next Super Mario Bros Movie Trailer is Here!

The Next Super Mario Bros Movie Trailer is Here!

Well folks, it’s finally here! Yep, as we mentioned yesterday, the second trailer for the Super Mario Bros Movie premiered online at 10pm today, complete with more footage showing all manner of new characters and content! Here’s the video if you haven’t seen it already: 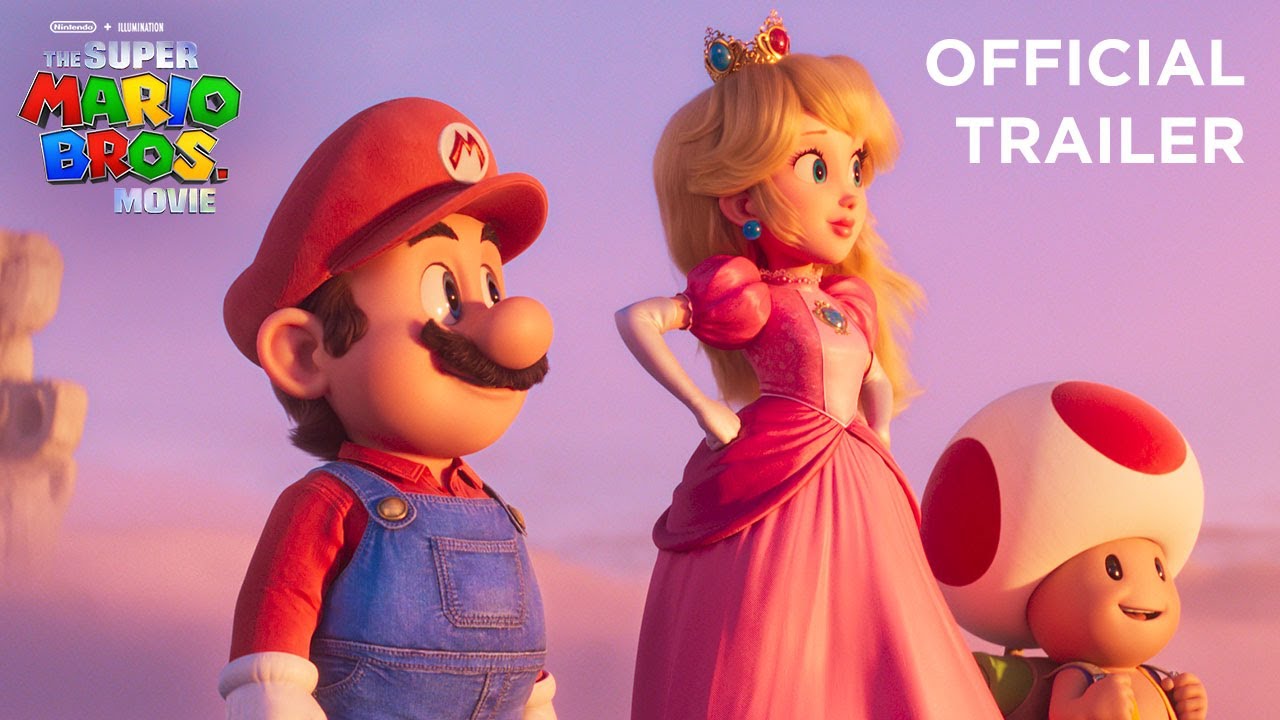 As you can see, there’s a lot to take in here. So, let’s go from the start, shall we?

Starting with Mario’s intro. He wanders through a dark hallway, and ends up in a colosseum full of apes and monkeys! 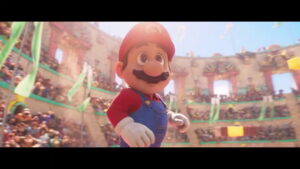 Yep, the Kong clan are here, and in greater numbers than ever! We’ve got Donkey Kong as Mario’s opponent, Cranky Kong acting like a king on his throne and hundreds of other Kongs lining the arena to watch the battle. It’s a DKC fans dream, and one which is likely stacked from floor to ceiling with cameos and references. 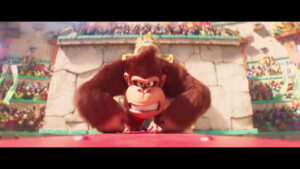 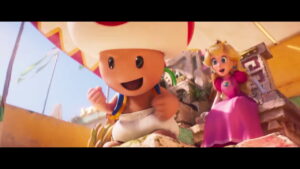 Whereas Toad and Peach watch on 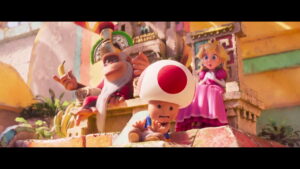 And Cranky Kong acts as the ruler of the area. Damn he looks regal!

Regardless, Mario doesn’t exactly stand much of a chance against DK. He charges in, gets grabbed mid air, and slapped around the face non stop while Peach and Toad look on in horror (and while Cranky just shrugs like its nothing). It’s a neat intro for DK, though given neither he nor Cranky Kong actually speak here, we’ll have to wait for another day to see how Seth Rogan and Fred Armisen handle those roles. 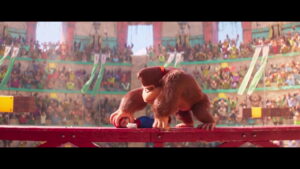 We also see the fate of Luigi here too. Apparently he got captured by Bowser off screen, and is being ‘tortured’ to get info on Mario’s location. Yeah, we said tortured here. Having your moustache torn off by the Koopa King has to hurt like hell. 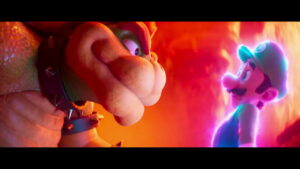 Tearing off moustaches must be against the Geneva Convention!

Still, it’s not Luigi’s moustache troubles that are the most interesting thing here. No, that goes to the Koopa Troop army scenes, which show numerous enemies from across the series. You can see Shy Guys, Snifits, Piranha Plants, Sledge Bros… if there’s a moderately well known Koopa species, it’s probably in here somewhere. So hey, Mario enemy representation! 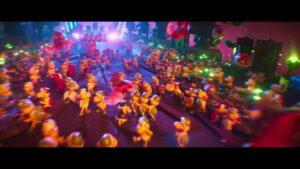 But it’s Bowser Army that takes the spotlight here. Look at all those different species!

There’s also a few Brooklyn scenes here too. These have Mario and Luigi doing plumbing work in the real world, like something out of the Super Show or movie. Huh, guess Kazooie lied to us in Mad Monster Mansion then! 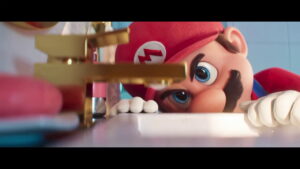 Yes, Mario actually does some plumbing in this movie 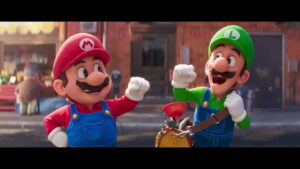 And Brooklyn makes an appearance again after many years…

And then Peach gets her speaking role.

This was the bit we were most worried about. After all, isn’t Peach a fairly flat, predictable character in the main series? One whose only role is usually to be kidnapped?

Yeah. Yeah she usually is, at least outside of a few of the RPGs.

Fortunately, the movie goes a very different route. Why?

Because Peach is actually a badass here! Yep, she’s a badass ruler trying to save her kingdom from Bowser, and actually helps train Mario in the task! It’s a really neat role to see, and one that makes her feel more like a worthy ruler and less like a cardboard cutout. 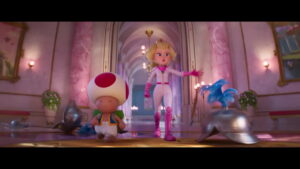 Yes, that does seem to be Peach’s Mario Kart Wii outfit

As for the Toads… they’re pretty cool here too. Not as badass as Peach or the bros sure, but they do have some neat designs and personalities regardless, and provide some nice comedy moments with the “we’re adorable” part. 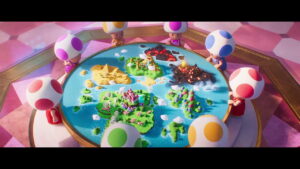 The Toads do make strategies though 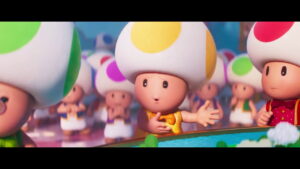 Yes you are adorable!

And then the Mario references come thick and fast. We’ve got Mario failing his training routine with Peach, falling for every possible platformer related trap in the process. We see Mario and Peach using powerups, with Tanooki Mario and Fire Peach looking better as a result. There’s a part with Luigi holding a vacuum, Luigi’s Mansion style. 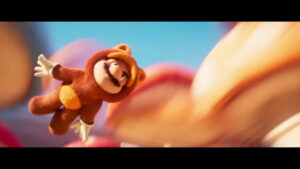 Mario flies through the kingdom in the Tanooki Suit 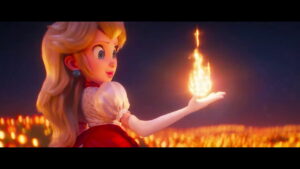 Hell, even Yoshi shows up here! Or more precisely, a whole herd of Yoshis on what looks to be Yoshi’s Island. Damn, they sure are including a lot of spinoff references here, aren’t they? 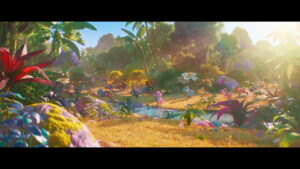 Especially given that Mario Kart gets referenced immediately afterwards, in the best way possible! Here we see Mario and co racing down Rainbow Road on go karts, complete with cameos from characters like Funky Kong! It’s an incredible scene, and one that really makes us excited to see what other insane Mario cross references will show up in the finished film. 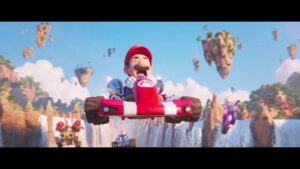 Mario races into the distance on his go-kart 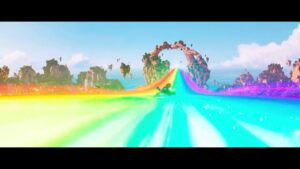 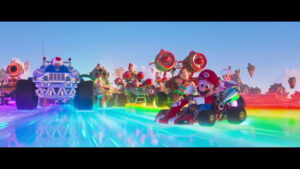 It’s a Mario fan’s dream movie, and one which just looks better and better in every trailer.

But yeah, that’s the second trailer for the Super Mario Bros Movie there. We’ve got DK, Cranky and Peach, there are Mario references galore, and everyone except Chris Pratt does an amazing job voicing their respective characters. It’s super exciting to see, and makes us interested in a Nintendo movie for the first time in literally forever.

Still, what do you think? Are you excited about the movie based on the latest trailer? What do you think about DK, Cranky Kong and Peach in this film so far?

Leave your thoughts on these questions (and more) in the comments below, on social media, or on our Discord server today!