When it comes to Mario Kart Tour, one of the best parts of the game is seeing what classic tracks they improve to modern Mario Kart standards. From Sunset Wilds to Cheep Cheep Island, Donut Plains 2 to Choco Mountain, it’s also neat to see the classics reimagined for a new generation.

And that’s true of a certain track from the next Tour too. Why? Because as it turns out, fan favourite Super Circuit track Boo Lake is returning in the Halloween Tour this year. Here’s the latest trailer showing the track in action:

The Battle Tour is wrapping up in #MarioKartTour. Next up is the Halloween Tour, featuring the course GBA Boo Lake! A pier floating atop a murky lake awaits… pic.twitter.com/ULbr34AaDn

As you can see, it actually seems like quite a unique remake here. There’s now a decent amount of elevation, like in Snow Land from Tour and 8 Deluxe, plus an entirely new underwater section never seen in the original track. 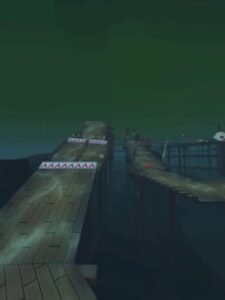 It’s quite the glow up overall, and one which is nice to see for such a forgotten track.

But why? Why bring in Boo Lake now and redo it so much?

Well, if the leaks are to be believed, it’s because the track features in the Booster Course Pass too. Yep, as we mentioned before, the names and song snippets from wave 3’s tracks were datamined from the game recently, complete with a song associated with both Boo Lake and Broken Pier from Super Circuit.

So presumably, this version is the one that’s heading to that game too. Perhaps with even more background details and interesting design tweaks added in.

Regardless, what do you think of it? Are you excited to see Boo Lake in Mario Kart Tour like this? What do you think the inevitable 8 Deluxe version will add that the Tour one doesn’t?

Leave your thoughts in the comments below, on social media, or in our Discord server today!