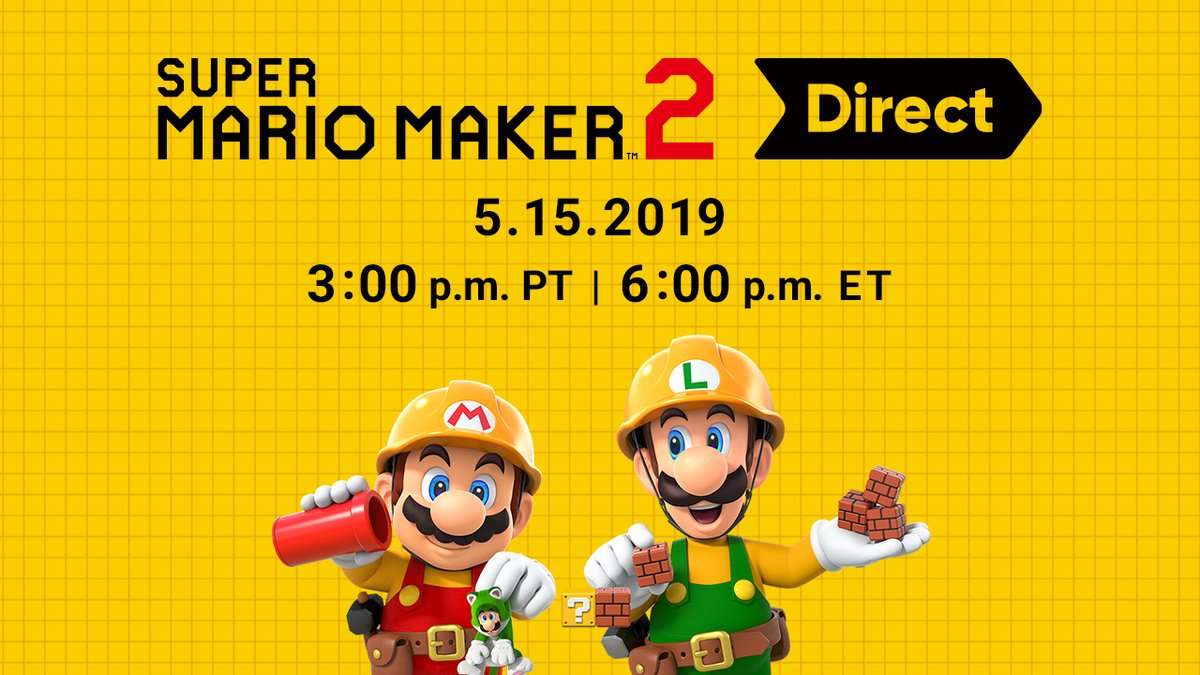 Earlier this week, Nintendo announced their plans for E3 2019. There they announced the air date of their main E3 Direct/presentation June 11th, as well as the return of the Nintendo Treehouse Live segment with even more detailed gameplay footage and announcements. It’s a pretty big deal, and it’s clear Nintendo has quite a bit ready to show off when the whole thing starts just a month or so from now.

But Nintendo isn’t just saving it all for E3. No, it seems they’re announcing details about a few of their major games before the event too.

Most notably, many of the additions and changes in Super Mario Maker 2. That’s because as the title suggests, a new Nintendo Direct for the title is coming tomorrow at 11pm GMT, complete with 15 minutes of information about the upcoming game. Here’s the announcement courtesy of Nintendo of America:

Tune in on Wednesday, May 15 at 3 p.m. PT / 6 p.m. ET for a roughly 15-minute presentation packed with information all about #SuperMarioMaker2 for #NintendoSwitch. pic.twitter.com/YUEDCzKQO4

Tune in on 15/05 at 11pm (UK time) for a roughly 15-minute presentation packed with information all about #SuperMarioMaker2 for #NintendoSwitch.

As well as some times for when the Directs will air in each region and time zone:

So what do we expect to see?

Honestly, we’re not sure. Remember, Super Mario Maker 2 has already shattered our expectations in the first trailer, with the likes of a Super Mario 3D World theme being something we’d never imagined being possible.

And the same goes with all the other new elements too. Snake blocks with custom created paths? The Angry Sun as an enemy? Clear pipes from 3D World with all the trappings?

None of those things were ones we’d expected in the title, and none of them are things we imagine were easy for Nintendo to code.

Hence the possibilities here are pretty much endless. Perhaps we’ll see even more new themes, such as ones based on Super Mario Bros 2 or the Super Mario Land titles. Maybe multiple layers will become a thing for once, complete with movement options like in Super Smash Bros Ultimate.

And on the enemy front? Well just about any enemy, item or boss from throughout the series’ history has a chance in the spotlight this time around. Koopalings, Reznor, Chargin’ Chucks, volcanic eruptions, who knows. Any and all of it could theoretically show up here, and the game would be better for its inclusion as a result.

So all we can do is sit back and see what kind of craziness Nintendo includes in this one. Because whatever it is, it’s gonna be great!