The Legend of Zelda Breath of the Wild; All DLC Item Locations

The Legend of Zelda Breath of the Wild; All DLC Item Locations

About a week or two ago, the Master Trials DLC pack was released for the Legend of Zelda Breath of the Wild. This pack added in various new items and armour pieces, which were then scattered across Hyrule for players to find.

However, their locations were actually quite cleverly concealed here. Indeed, in most cases the items were placed in areas you either didn’t know existed or wandered straight past without noticing. I mean, do you remember the Sage Temple Ruins?

Nope, nor do most people. It was completely irrelevant to your adventure up until this DLC pack.

And so with that being the case for most items, I’ve decided to help everyone out a bit. Namely, by providing a handy little walkthrough illustrating exactly where all this equipment can be located! You can see it in video form here: 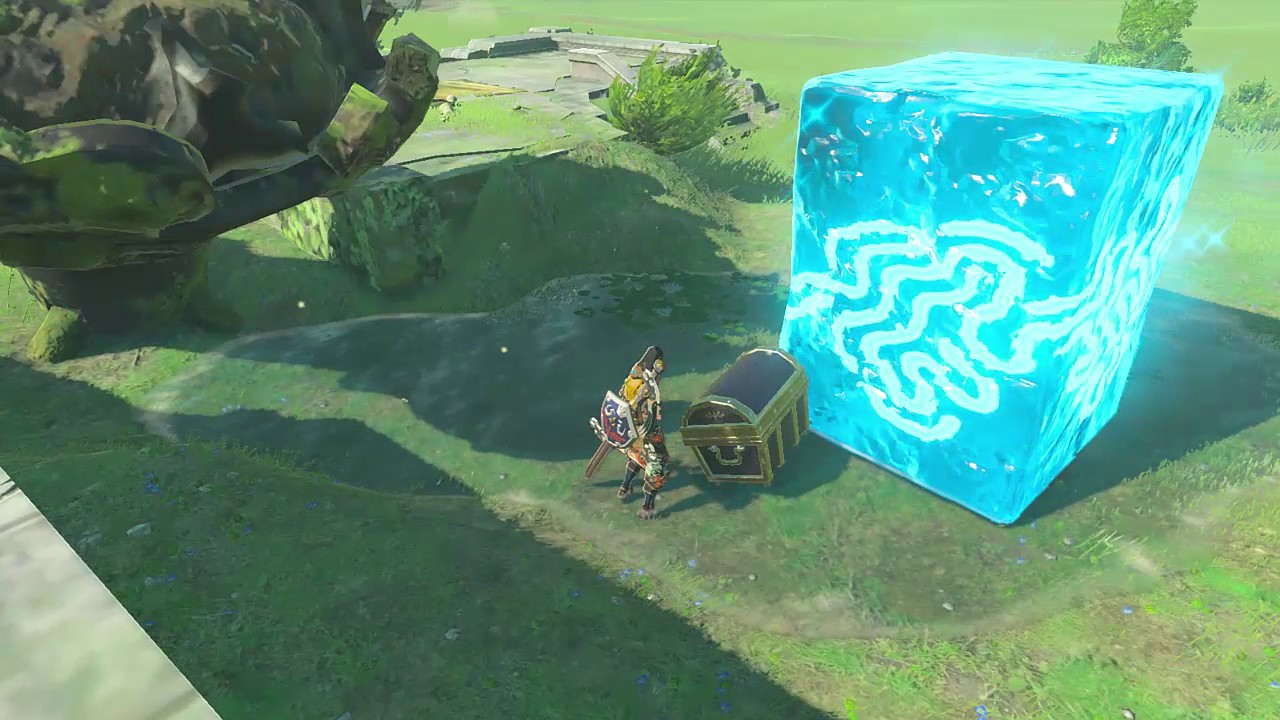 Or continue reading for a text based version. So let’s start off the walkthrough shall we? Complete with perhaps the best item addition in the entirety of the Master Trials…

Which can be found in the basement of the Lomei Labyrinth in North Akkala. Once you’re there, just go dead south and you’ll find the chest near the wall.

Here’s a picture in case you can’t pinpoint it: 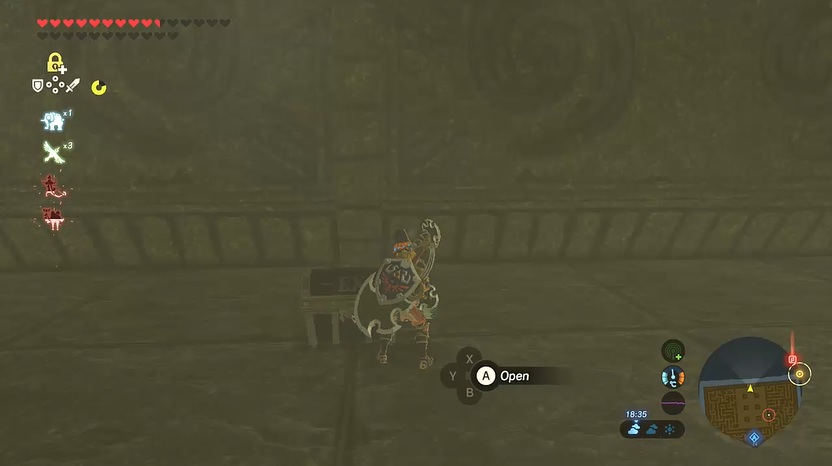 As well as a screenshot of the map showing where it is: 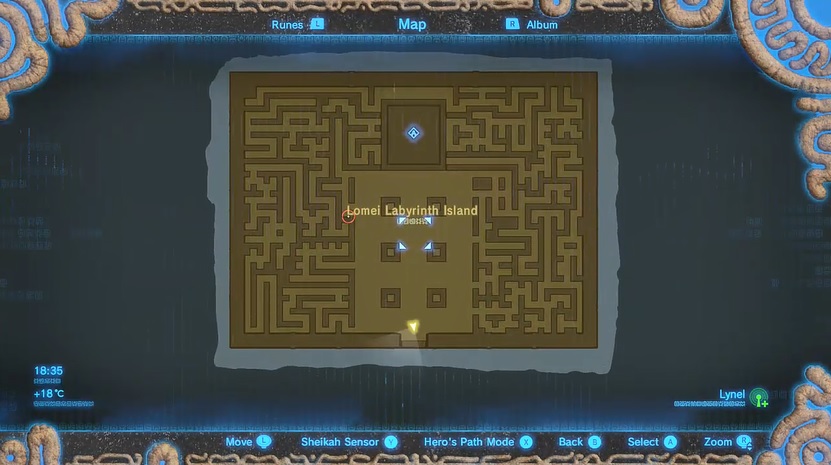 Just one small snag though:

Yep, this place is littered with Guardians. Indeed, this very room has five Decayed Guardians and three fully mobile Guardian Stalkers in it!

So once you’ve found the Medallion, you should probably get out of there, stat. Otherwise poor old Link is going to get his head blasted off by all the Guardians in the area.

But now you know where it is, how good is the medallion itself?

Well, it’s actually pretty useful really. You just have to select it from your key items, click place and then warp to it like any other Shrine or Tower.

It’s as simple as you could ever want it to be. However, the tool does have its limits.

For one thing, it doesn’t work inside Divine Beast dungeons. So if you were planning to use it to bypass puzzles there for whatever reason, you’ll need a new strategy. Same goes for shrines, which are again considered separate from the main overworld.

And quite a few other places too. Want to use it to get out of bounds in Hyrule Castle? Tough luck, the game detects you’re not meant to be there and blocks the medallion. Same with most places where you can clip through a wall with the horse clipping glitch.

As well as anywhere which could be used to royally screw up the game’s sequence. For example, if you try and place it inside the area where Yunobo will appear…

Then talk to Bludo to make him appear, the warp point will be automatically deleted. So a lot of the ‘fun’ uses of this thing have been blocked in advance.

But hey, it’s still useful none the less. Definitely something worth picking up as soon as possible. 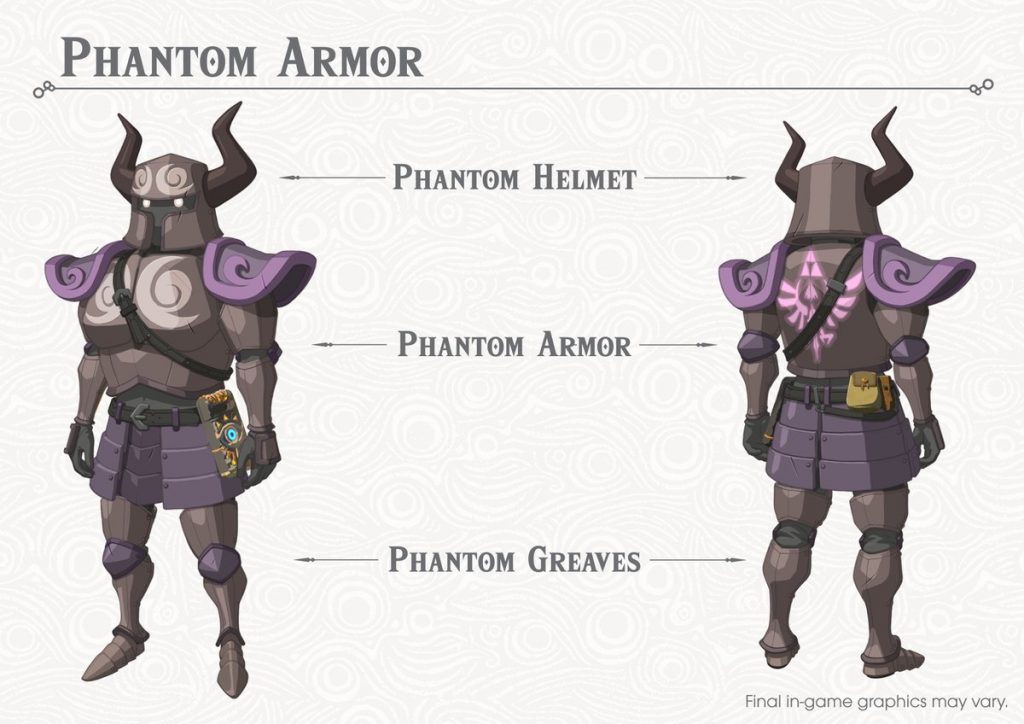 Which is also the case with the Phantom Armour. Why? Because it acts like the Barbarian Armour, and boosts your attack power for every piece equipped.

This means it’s a great early game piece of game for Master Mode. So where can you find it? Well the helmet can be found in the Colosseum Ruins, against the back wall. Here’s a picture in case you’re having trouble locating it: 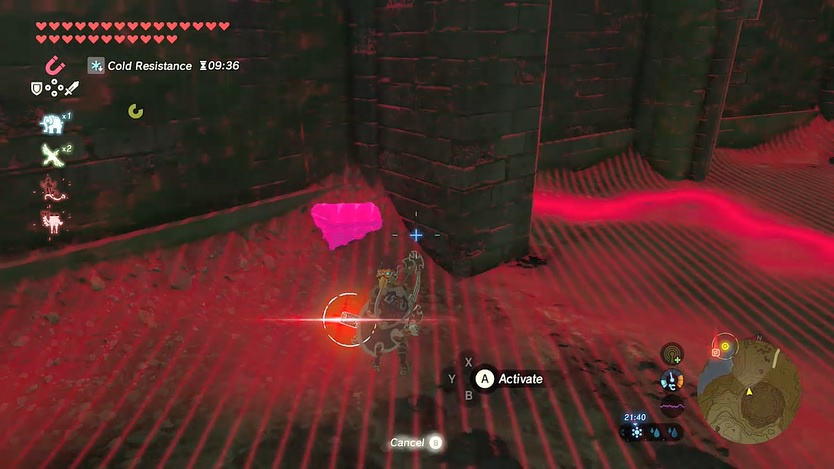 As well as a glimpse at Link’s map location: 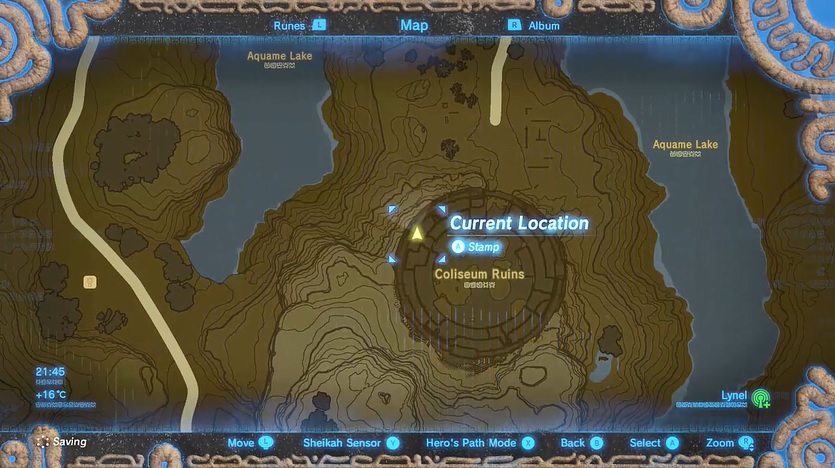 It’s obviously past a deadly Lynel, so you’re recommended to get Majora’s Mask (or the Lynel Mask) before trying to pick it up.

As for the Armour, well that’s in a pretty bad place too. Namely the Sacred Ground Ruins south of Hyrule Castle. Here, the armour can be found to the east in the watery moat surrounding the area, and then picked out by using Magnesis. 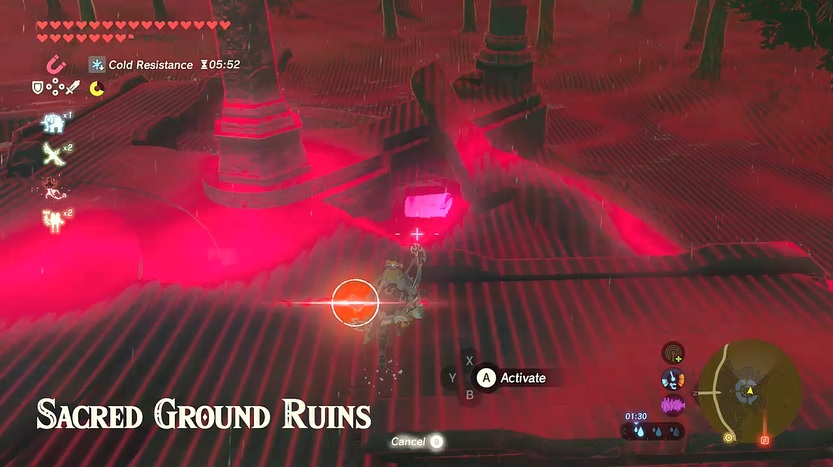 Again, along with a glimpse of the map highlighting Link’s location: 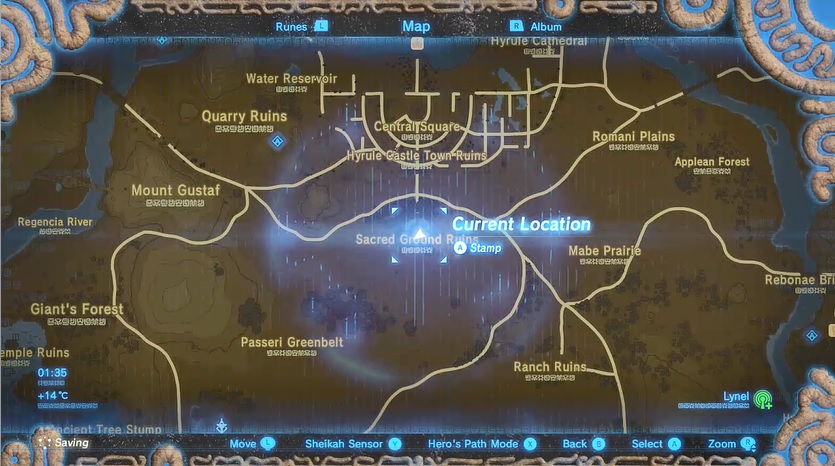 Just be warned however, that this is Guardian territory. There are at least Guardian Stalkers in the area, and they will be able to blast Link to pieces in seconds if he gets spotted early in the game.

So if you’re using it as a ‘disc one nuke’ item for Master Mode… be prepared to teleport out or run as quickly as possible. Otherwise poor Link’s going to end up barbecued by the laser blasts.

Finally, the Phantom Greaves can be found in the Hyrule Garrison Ruins next to a dead Guardian. So here’s a picture indicating where this piece is: 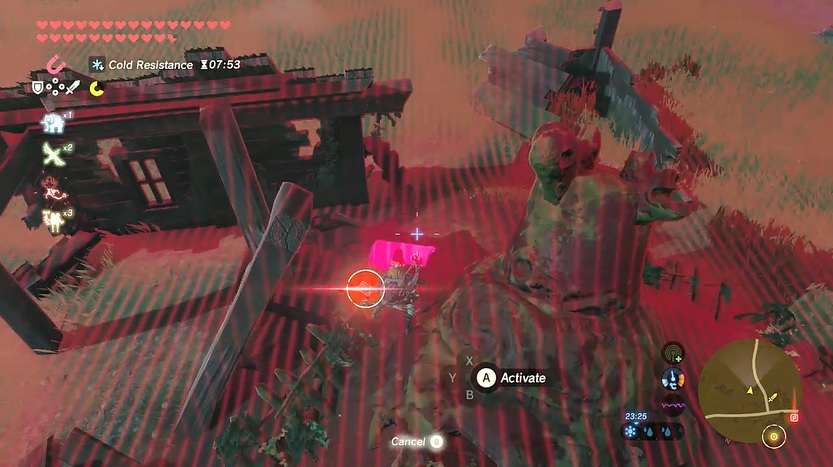 Along with another map indicating its exact whereabouts: 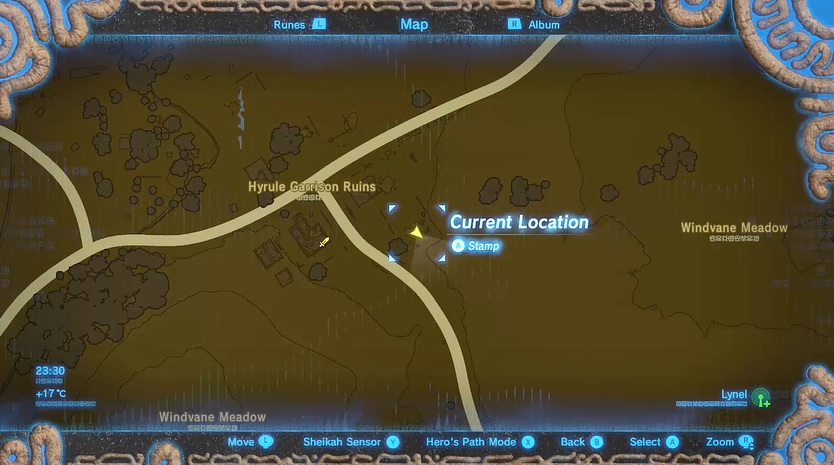 Still, while that answers one question, it leaves another one. Namely, how good is the armour on a practical level?

Pretty useful actually, especially early in the game where you’ve mostly got bad equipment. Remember, this is the equivalent of the Barbarian Set with a few upgrades. That’s damn near broken for the early game.

So for when you’re starting out on a file, the Phantom Armour is a must have. However, here’s the issue;

It doesn’t stay that way. That’s because unlike the Barbarian Armour (or most other sets in the game), the Phantom Armour cannot ever be upgraded.

This means that while its 24 defence rating is nice at the beginning, it’s absolutely terrible during the endgame.

So the Phantom Armour is basically a crutch set; good for beginners, vastly outclassed for experts or late game players. 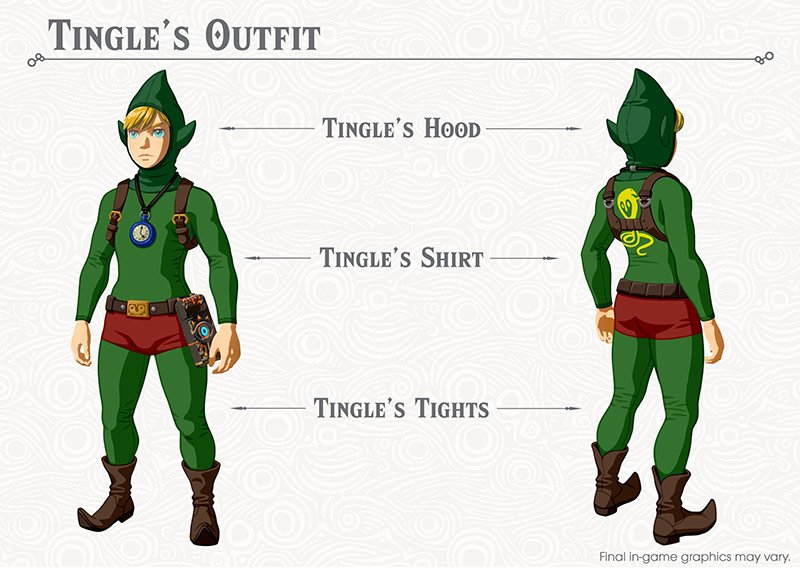 But hey, at least it’s better than this set. Because the Tingle Outfit has exactly two uses in Breath of the Wild:

Neither is a huge benefit in game, especially given how the latter can be done with the Sheikah and Dark Link sets and the former is a property shared with the Dark Link set and Phantom Armour.

If you do want it for completion’s sake though, you can find Tingle’s Hood in the Exchange Ruins, which is to the North West of Lake Kolomo. Here’s a picture of the chest’s location if you’re having trouble: 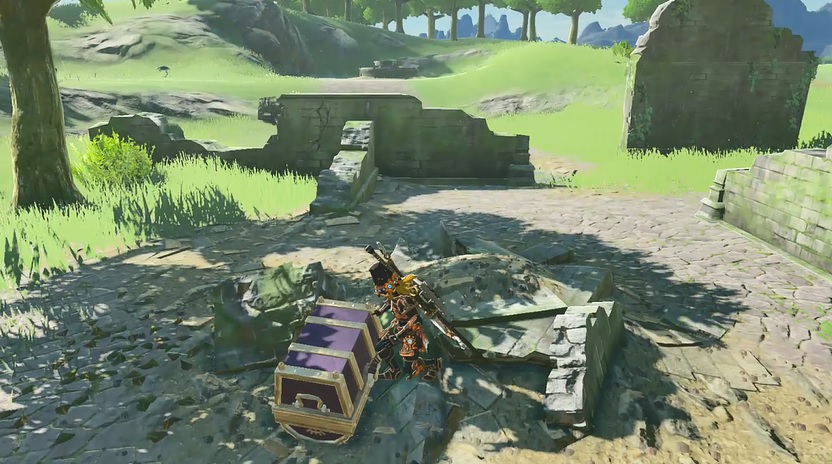 As well as a screenshot showing the area of the map it can be found in: 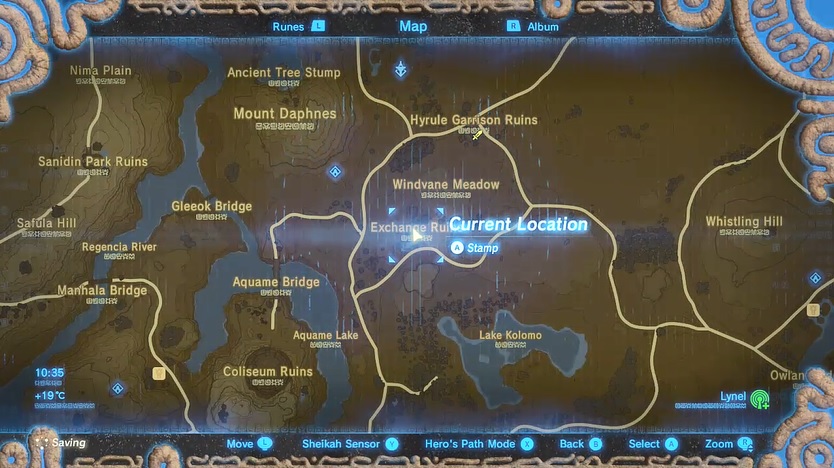 Tingle’s Shirt can be found in the Castle Town Prison (how appropriate!), which is on an island West of Hyrule Castle. Avoid or destroy the Guardian Stalker nearby, then just hoist it out the ground in the middle of the prison. 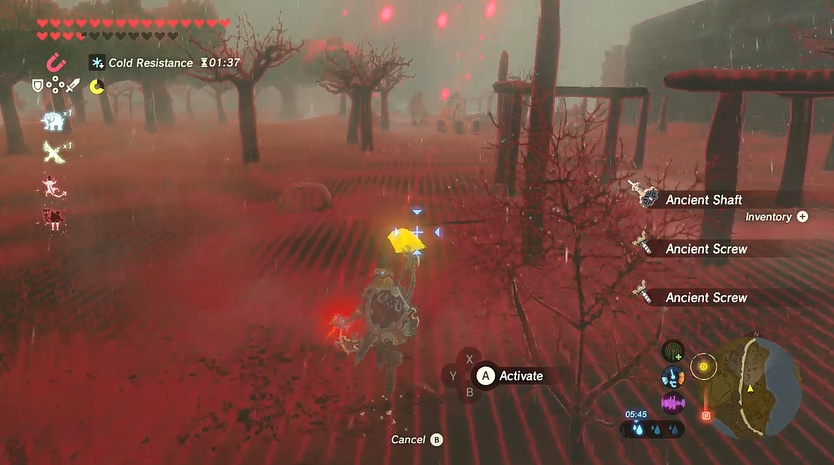 In addition to another shot of the map to make it easier to track down: 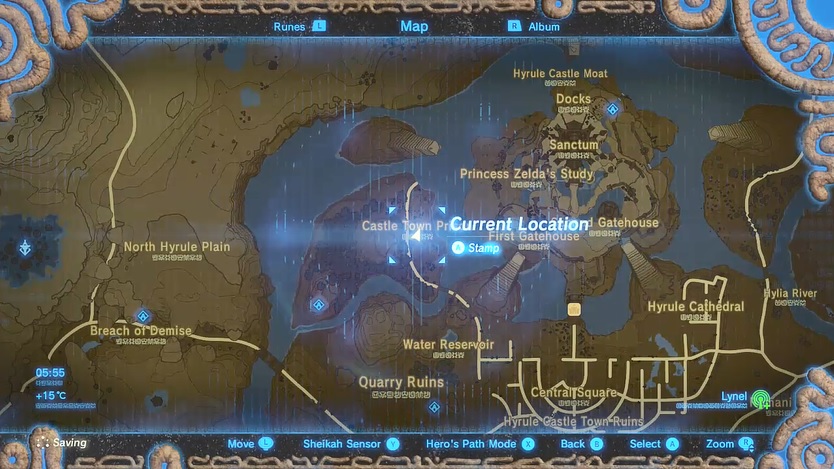 Last but not least, Tingle’s Tights can be found in the Mabe Village Ruins, next to a dead Guardian in a pool of water.

So here’s a picture showing where you can find them: 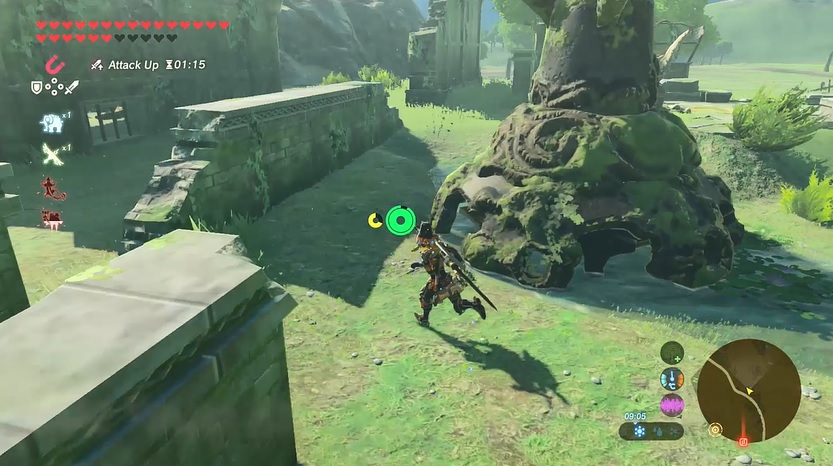 As well as a shot showing their location on the map: 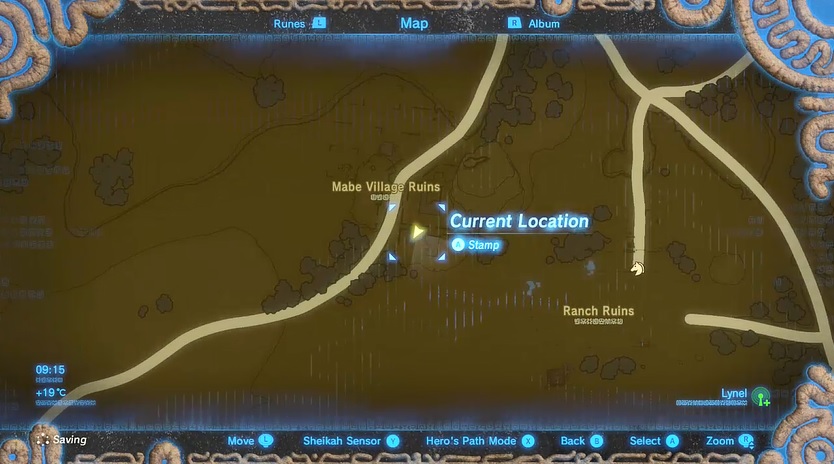 Still, it’s only fair that after the second worst DLC item in the game, we move on to the best one. Yep, Majora’s Mask is an amazingly useful piece of kit in this game! 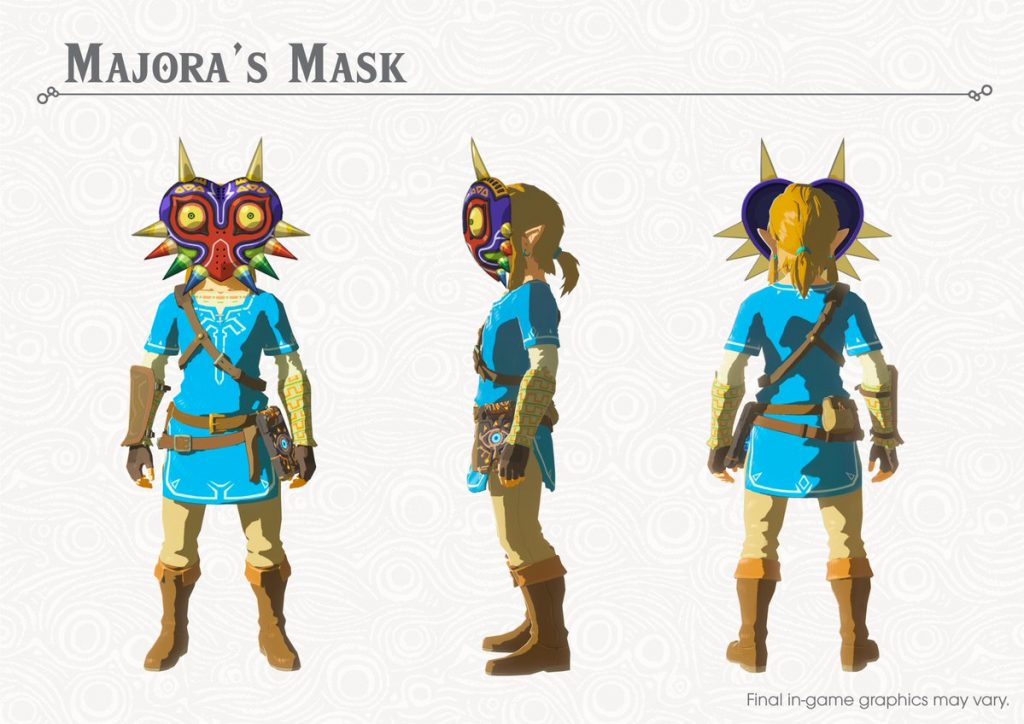 Because it acts like every single one of Kilton’s Masks is being worn at once. This lets you avoid fighting Bokoblins, Moblins, Lizalfos, Lynels and any undead enemies all in one go.

And as you can guess… well that trivialises much of the game. Remember, Breath of the Wild is not big on enemy variety. Almost every ‘major’ combat encounter is with one of the monsters mentioned above (with the exceptions of Guardian and Yiga fights).

So someone wearing it can just walk past most of the game’s monsters, yank treasure chests off rafts without them batting an eyelid and nick stuff from camps. Pretty neat.

But where do you find it? Well, the Kolomo Garrison Ruins, that’s where! It’s next to a stone building on a piece of land in the middle of an M shaped lake.

Here’s a screenshot in case you’re having trouble finding it: 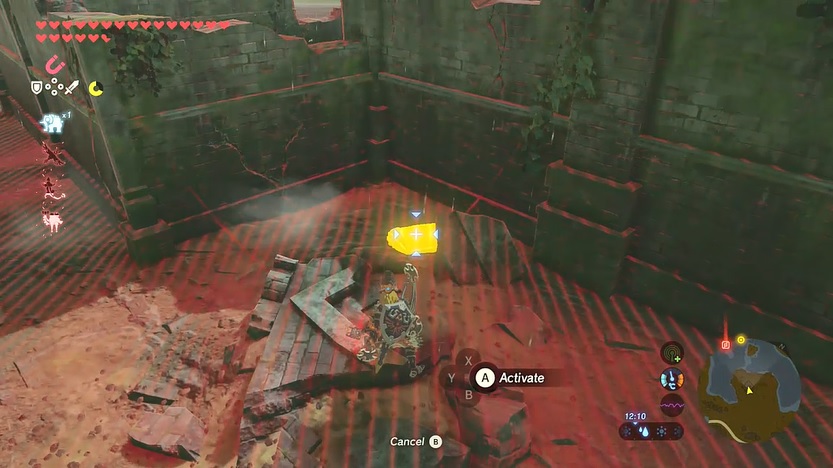 As well as another shot of the map illustrating the locale: 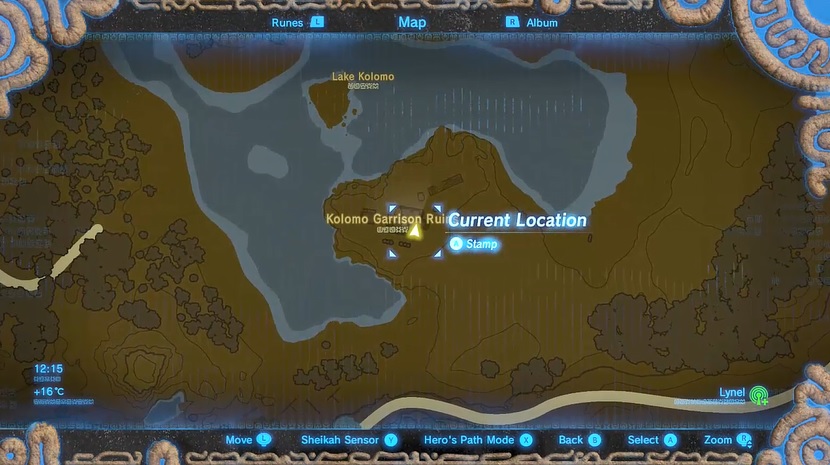 It’s about five minutes from the edge of the Great Plateau and extremely easy to find, so you shouldn’t have much trouble locating it. 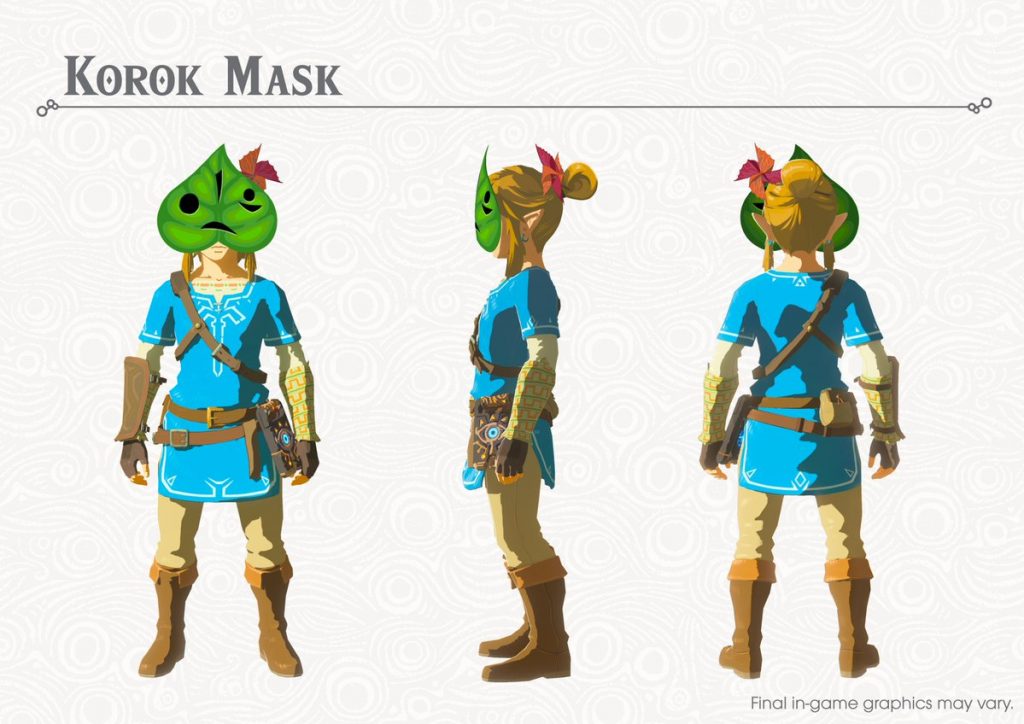 Which is unfortunately not something you can say about the next bit of armour. That’s because for some boneheaded reason, Nintendo stuck it in the Lost Woods.

Yes, the place you get lost very easily the minute you step off the path.

Either way, to find it go to the two torches at the halfway point of the Lost Woods. Then, turn and head South to the shore, and it’s inside a hollow tree.

Really, it’s annoying to explain here. You might be better watching the video given how precise you need to be with your pathing.

But it’s useful once you get it. And the next one isn’t much easier to find.

Because Midna’s Helmet is located at the Sage Temple Ruins, next to some rubble in the South West of the area. Here’s a picture showing the chest’s whereabouts: 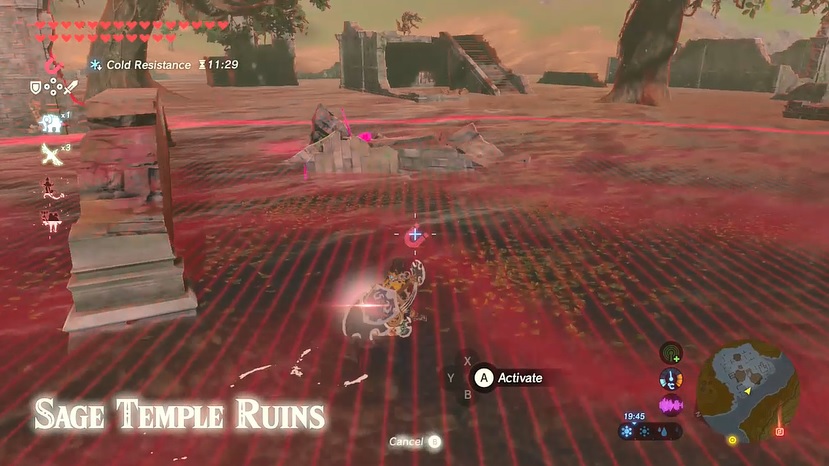 In addition to its location on the map: 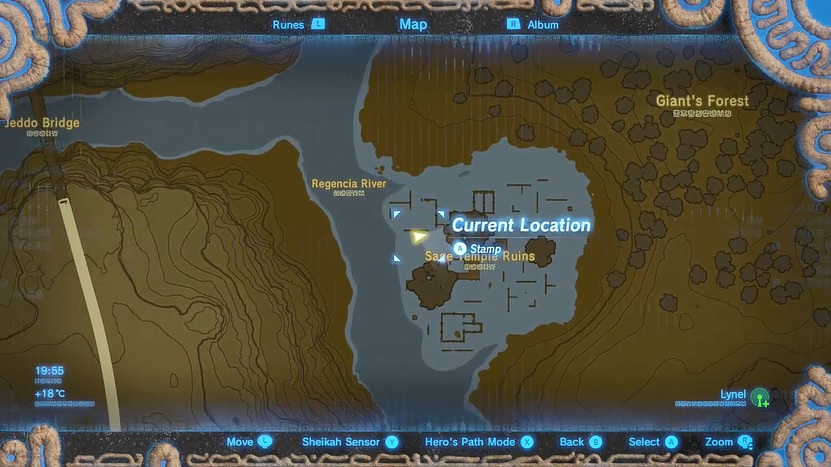 It’s a pretty out of the way place to stick a piece of armour. But how good is it?

Well to be perfectly honest, not very. Because Midna’s Helmet has the sole effect of increasing your Guardian Resist stats. I.e., making it so you take slightly less damage from Guardian attacks.

Problem is, so does the Ancient Armour and the Diamond Circlet, one of which is also free (and arguably about as far out of your way) and one of which can simply be bought in the Akkala Ancient Tech Lab.

Then factor in how both alternatives can be upgraded (unlike Midna’s Helmet) or how the Ancient Armour is one of the best sets in the game (thanks Ancient Proficiency!) and you’ve got an item only good for looks.

Still, at least you know where to find it now. So there’s some value in getting 100% completion with it none the less.

And that’s it for the guide. Hopefully that helped you find the new items from the latest DLC pack, as well as giving a brief rundown of which ones are actually useful for your adventure.

If you’re still having trouble, ask for help in the comments below, or post a topic about it over on the Gaming Latest forums today!