For many years, Breath of the Wild fans have wondered what lies beyond Hyrule’s borders. Whether its the towering cliffs at the north of the map, the endless desert to the west or the oceans in the south and east, the open nature of the game has always made people wonder if there’s more to see.

Unfortunately though, getting there hasn’t exactly been simple. Oh no. Not only are there giant invisible walls around the edges of the world (with a message saying you can’t go any further should you try to pass them), but said walls have proven resistant to many sequence breaks and tricks too. Skew, stasis clipping, moon jump… each and every one has failed to get Link past the barrier.

What’s more, when you can seemingly get past… there’s always been a catch there too. Escape the Divine Beast dungeons? Sorry, you’re in a low poly version of Hyrule where solid ground is entirely non existent. Use Hyrule Overload? You’re in the last battle, where most NPCs and objects are disabled altogether, and saving is mostly prohibited. 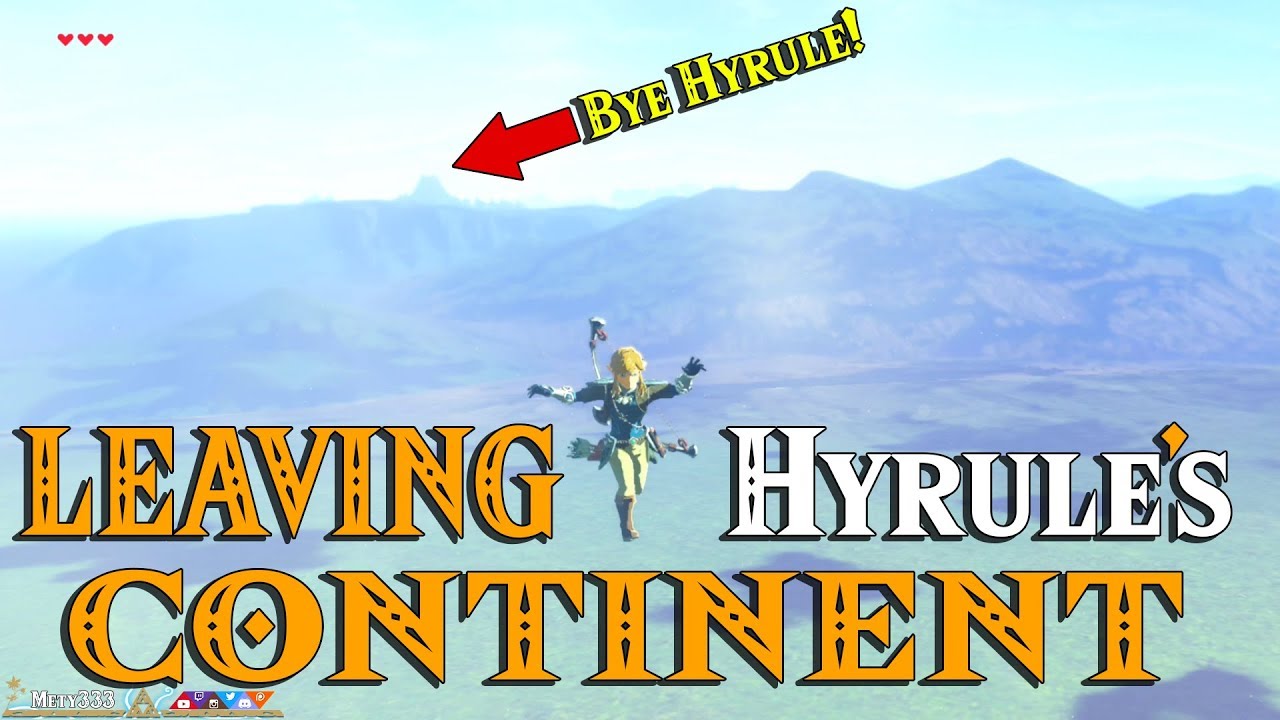 But now that’s all changed. Now a new, simple method has been found to escape Hyrule in the Legend of Zelda Breath of the Wild.

So join us, as we show you how it’s all possible!

First of all, here’s our tutorial video. If you prefer a video guide, watch that one: 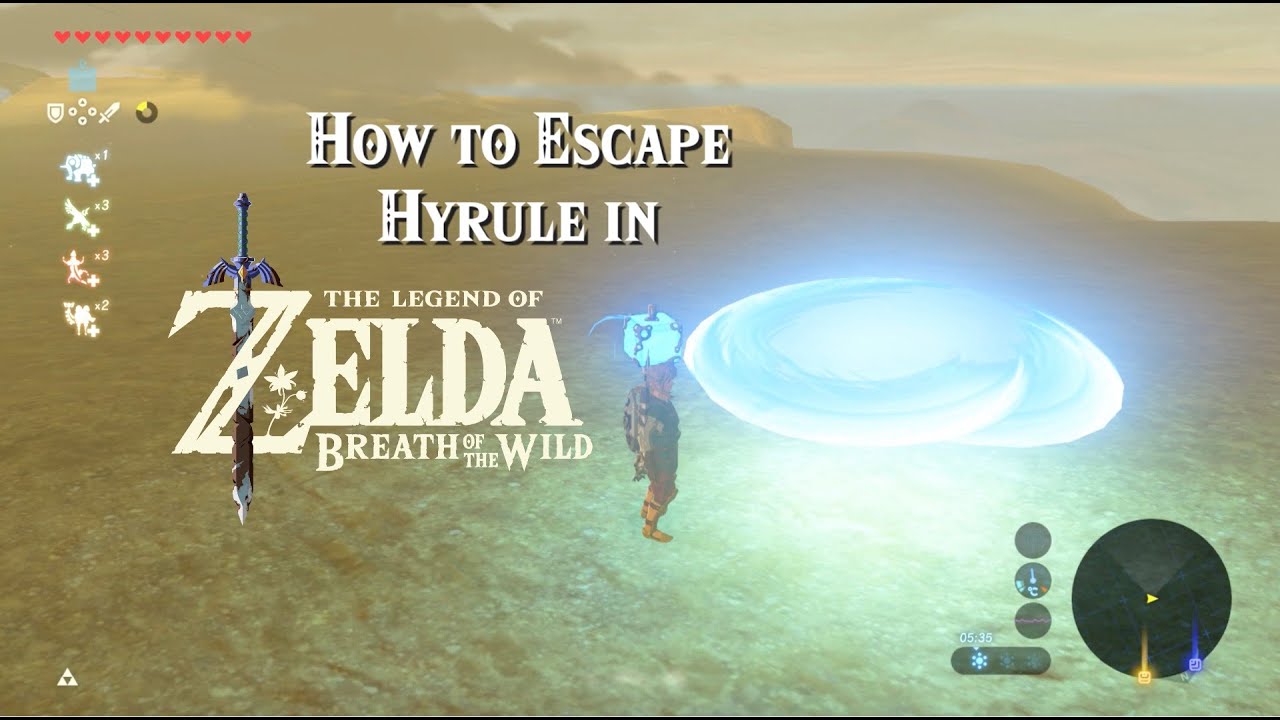 To get this glitch working, you’ll need the following equipment:

You might also want to have the following if you plan to save out of bounds:

Starting with the basics. The first thing you’ll want to do is find a way beneath the ground.

And there various ways to do that. You can use ollie clipping, if you’re good at that sort of thing. You can use Apparatus Storage and void out storage to end up underneath central Hyrule.

Or you can find some other way there via horse clipping, skew or whatever else you use to get through walls.

Regardless, we’re not going to do any of those things. Instead, we’re going to use Hyrule Unloading to get out of bounds.

That’s because to set up the glitch, you’ll eventually need to head all the way to the edge of the map. As a result, going from central Hyrule is not particularly practical, and neither is any other trick involving location specific clipping setups.

So head to the Gerudo Canyon Stable, then take out your horse. 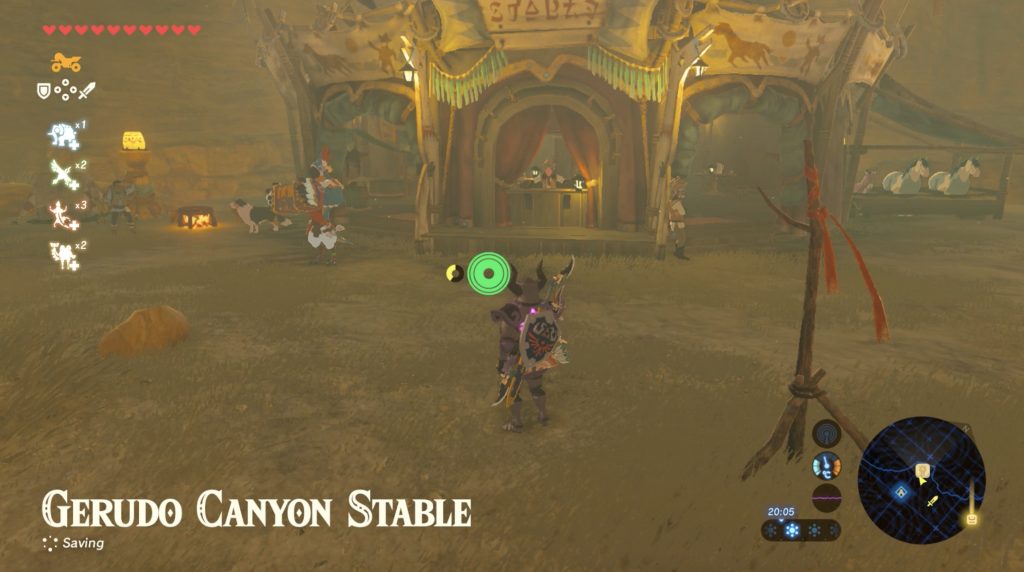 As you can see, we start at the Gerudo Canyon Stable 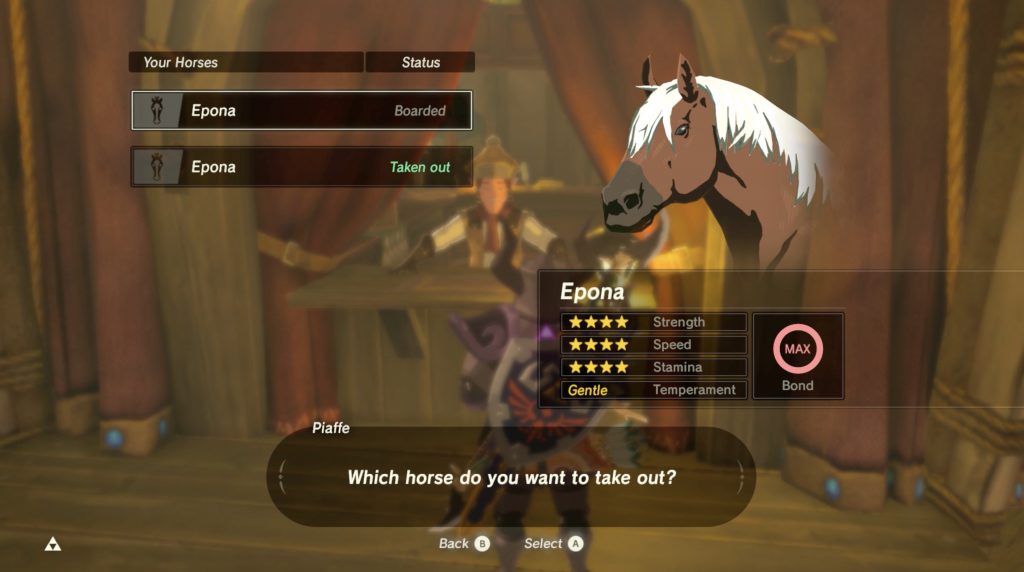 We then take out our horse

From here, ride it along the path past the ruined Guardians, until you reach this ladder with a Lizalfos nearby. 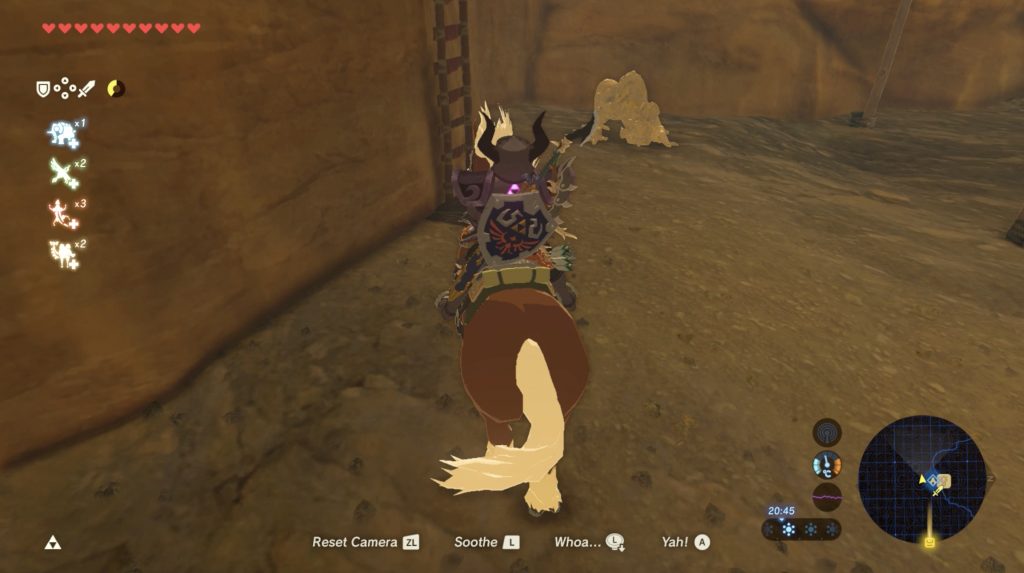 This is where you need to save the game

Now, save while on your horse.

Next, you’ll want to head to an Apparatus shrine. Like the Myahm Agana one in Hateno Village. 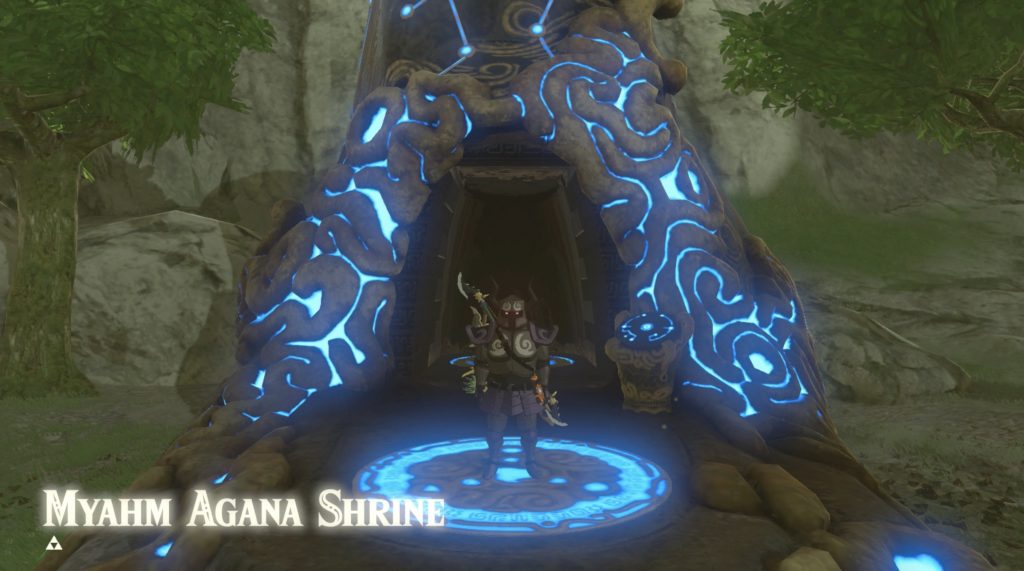 This is one possible Apparatus shrine you can use

Once here, you’ll want to set up Apparatus Storage. Here’s how you do that:

You should reappear next to your horse. 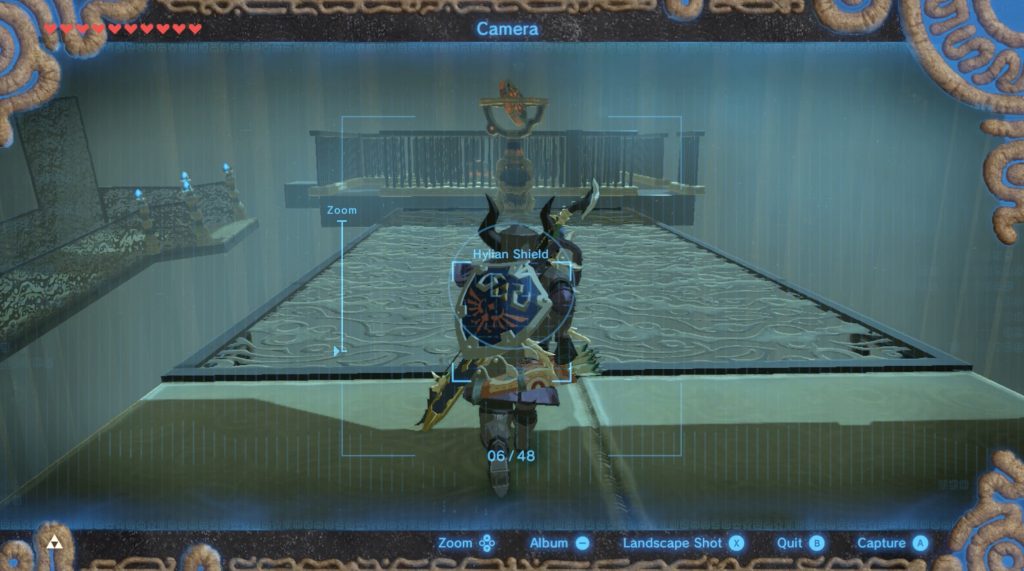 Move with the camera rune open, then activate terminal 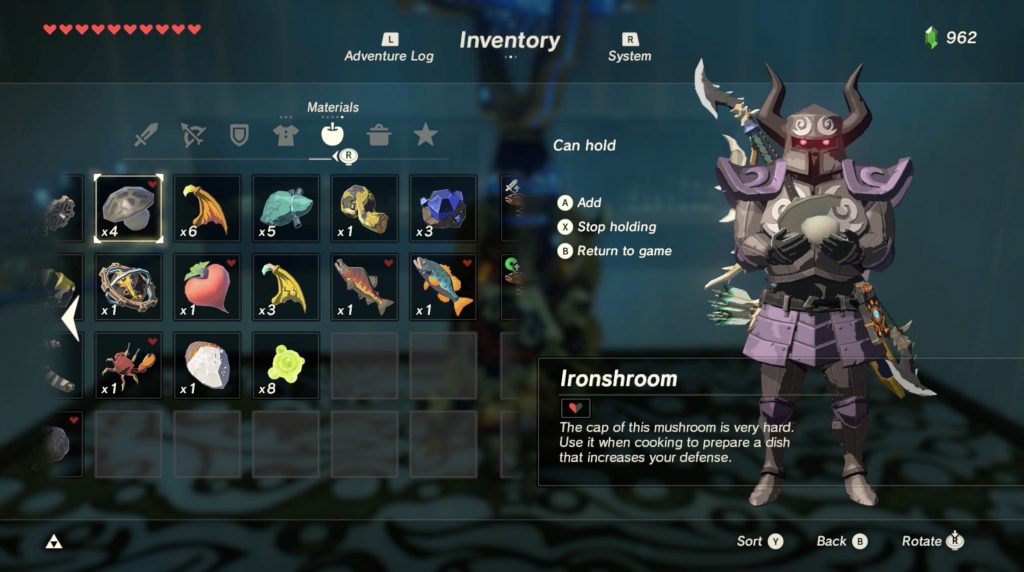 Once you leave camera mode, hold an item 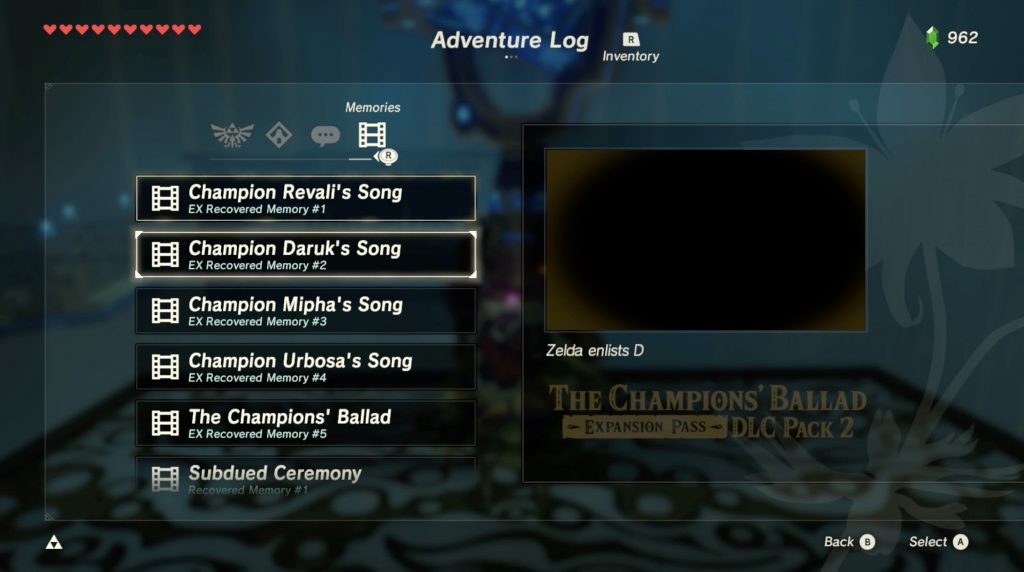 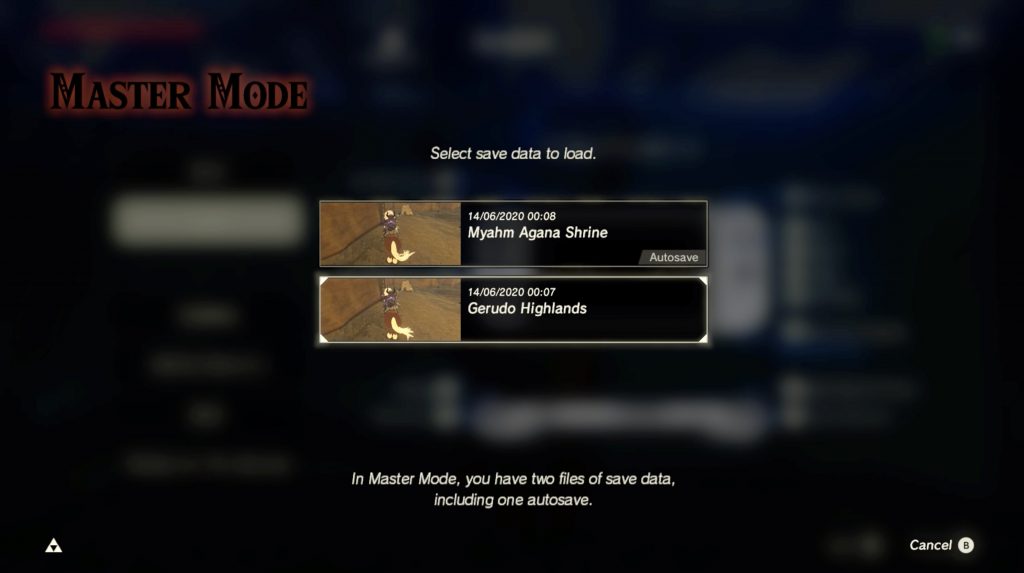 Load save file on horse when Apparatus set up 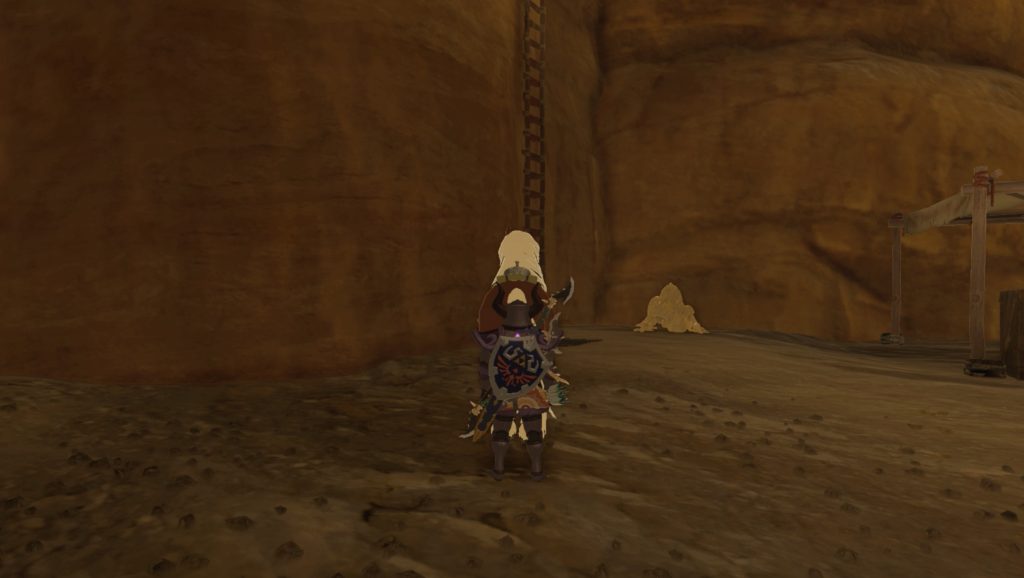 If you reappear behind your horse, the glitch worked

If so, teleport to a shrine on the far east side of the map. The Tu Ka’loh shrine is a good choice, since it’s in the middle of Lomei Labyrinth Island in the north east. 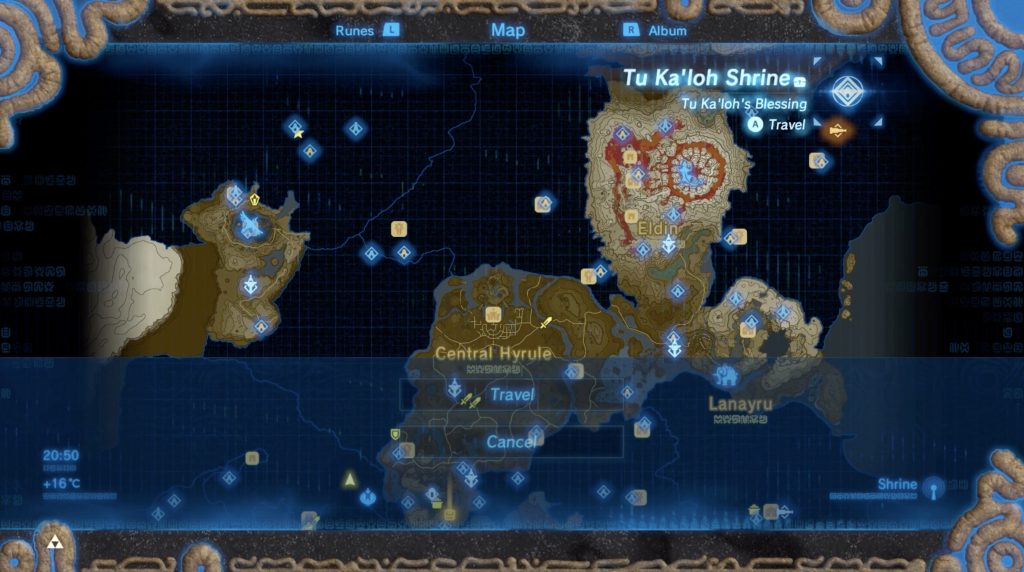 Teleport to a shrine far away from where you saved.

Once you do, you’ll notice Link won’t appear by that shrine. Instead he’ll appear in an unloaded version of the area near the Gerudo Canyon Stable.

You’ll also notice that both Link and his horse will fall straight through the ground. This puts you by the water layer, a layer of well, water that stretches right across Hyrule. 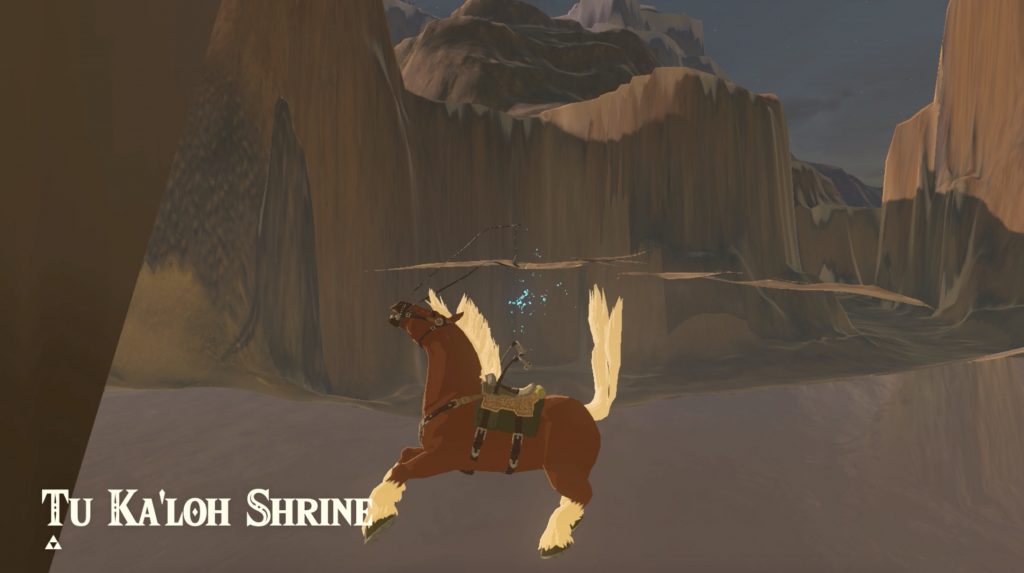 Link and his horse should both fall through the ground

Now comes the annoying part. Basicallly, you’ll need to find a ledge down here where you can place the Travel Medallion.

And said ledges are not the easiest thing in the world to reach. So look around, until you see two waterfalls. Between them is part of a cliff side.

That cliff side has a few big ledges you can stand on. So swim towards the waterfalls, go upwards, and glide/climb over to the ledge. 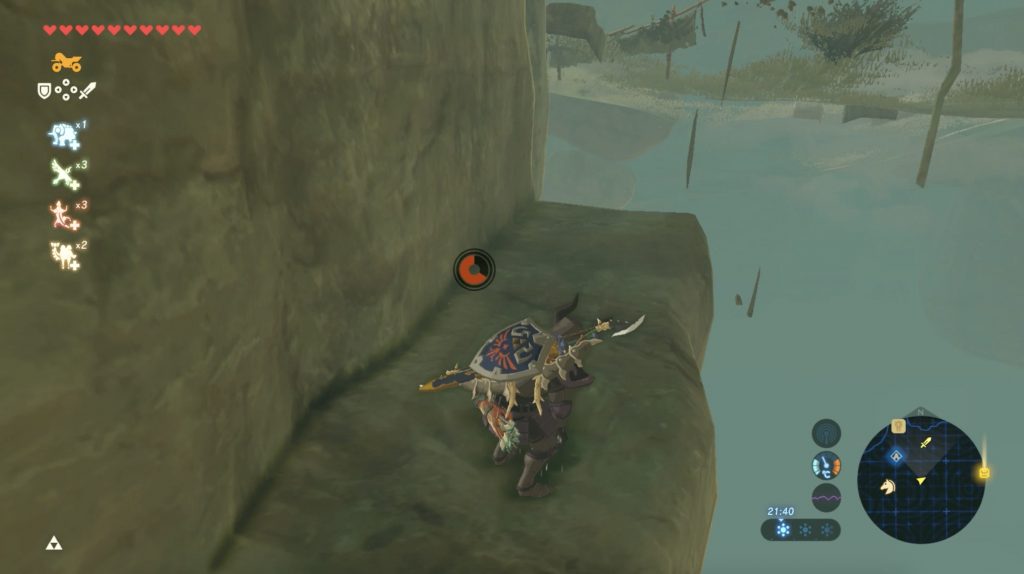 Once you’re there, place down the Travel Medallion. 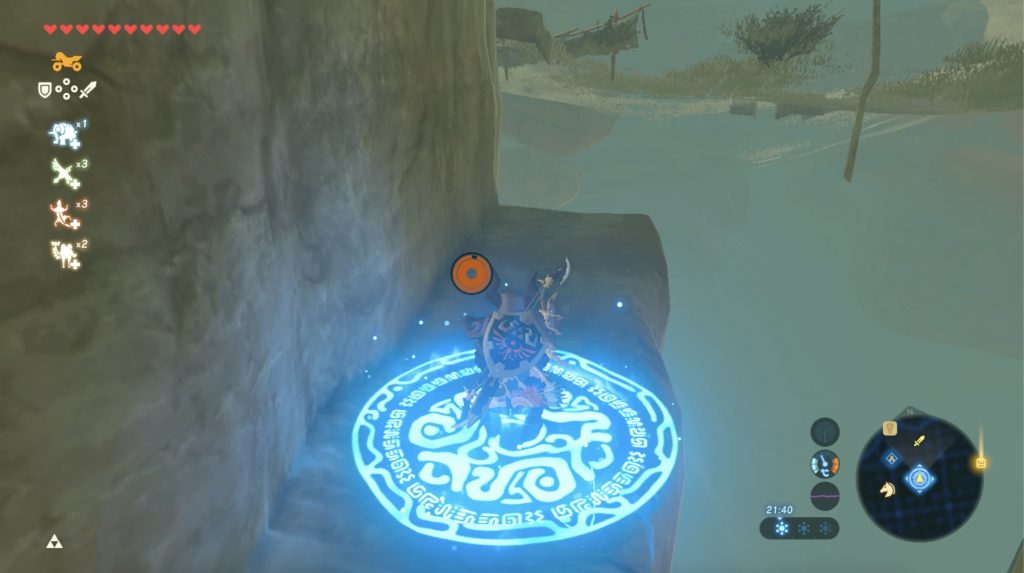 Now, head to the mounted archery camp. As you can imagine, we’re going to be setting up moon jump. 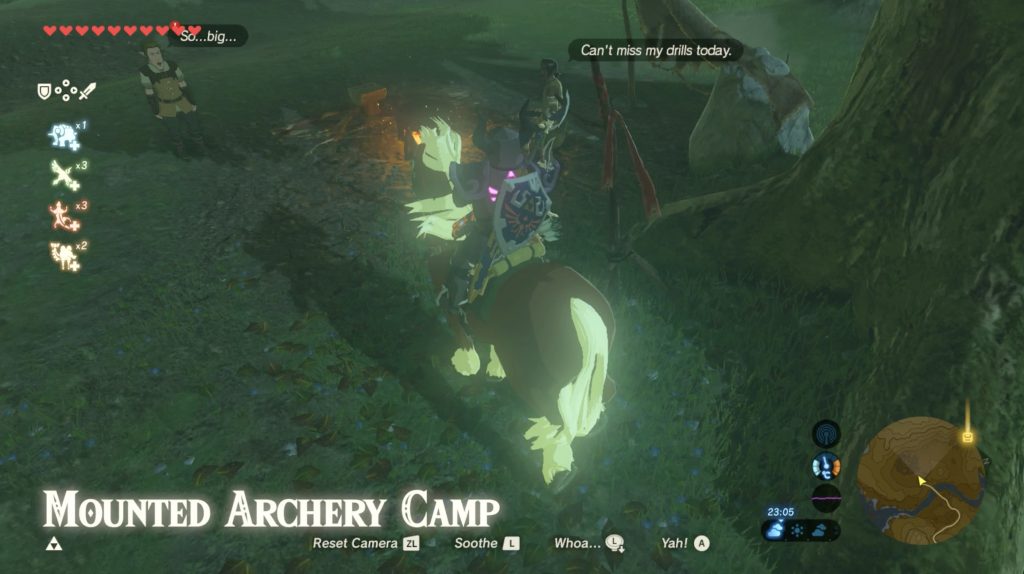 So play the game, but head off the cliffs near these horses instead. When the timer for the game runs out, glide down and land on a wild horse. 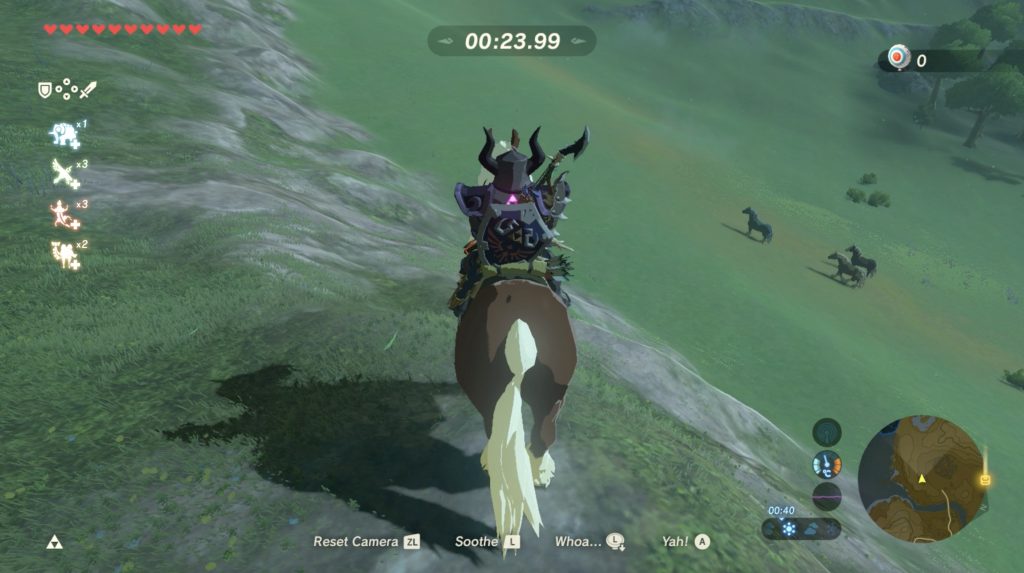 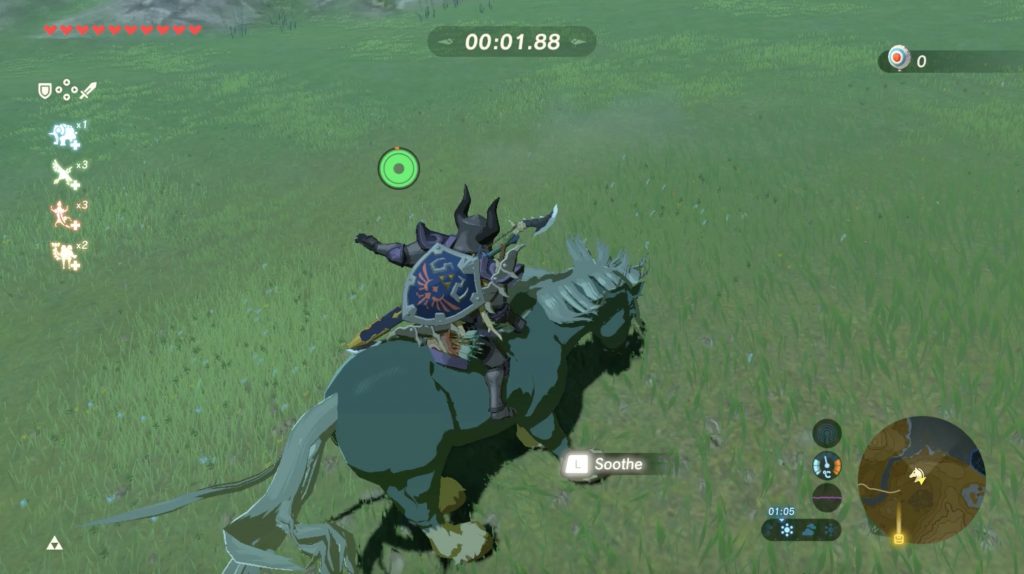 Don’t tame this horse, just wait on it till time runs out.

Next, say you don’t want to continue the mini game. Warp to the medallion to get moon jump. 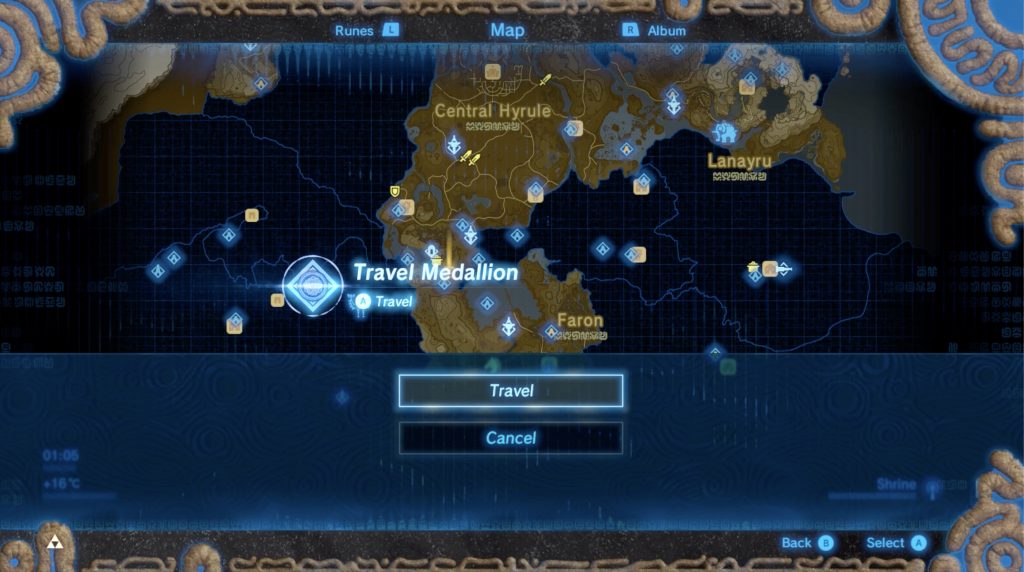 Immediately go to your Travel Medallion after quitting the mini game

And now… here comes the tricky part. You want to moon jump all the way to the edge of the world. As in, the border on the far south/west of the Gerudo Desert. 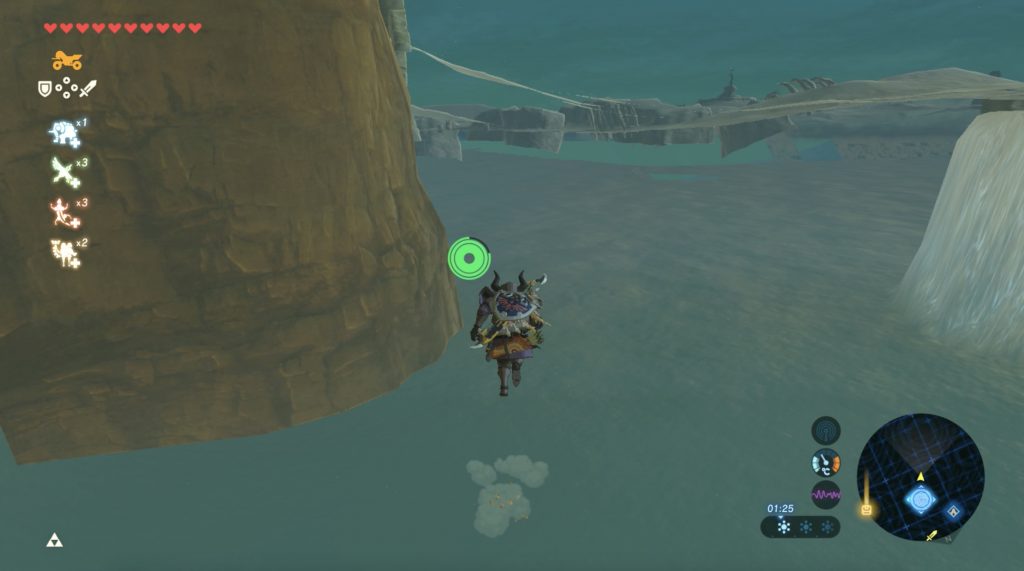 You need to jump to the border while out of bounds. Leave 15 minutes for this

This will take a while. Honestly, I’d say about 20 minutes of jumping will do it.

Once you finally get there, you’ll obviously hit the wall. So fall down into the water, and go swimming towards the wall. 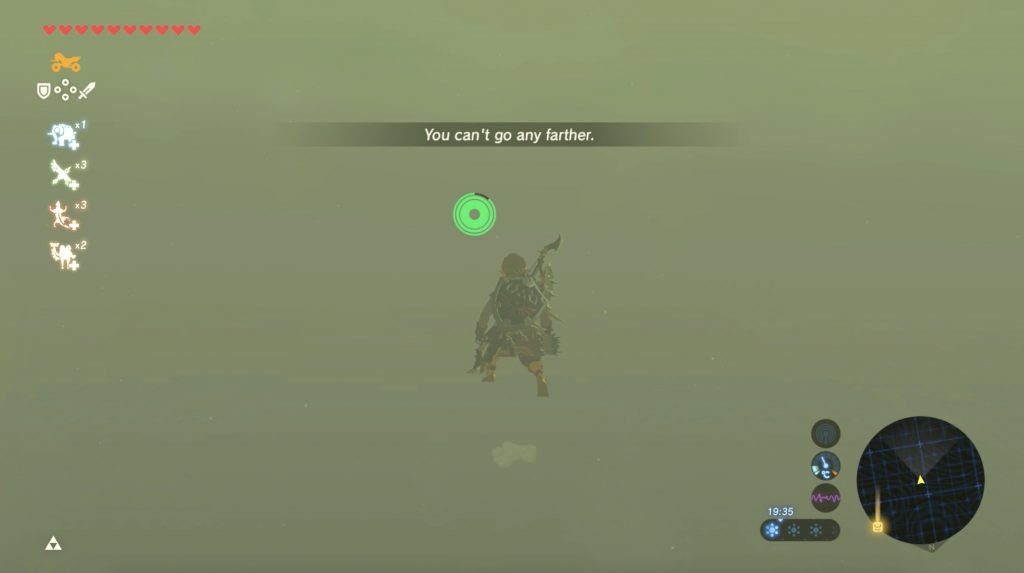 When you see this message, drop down and swim forward

If done right, you should eventually fall through the water. If you do, this means you’ve passed the edge of the water layer (at least collision wise), and are past the barrier. Keep jumping up now, and you’ll get past the barrier, leaving Link free to explore the great beyond. 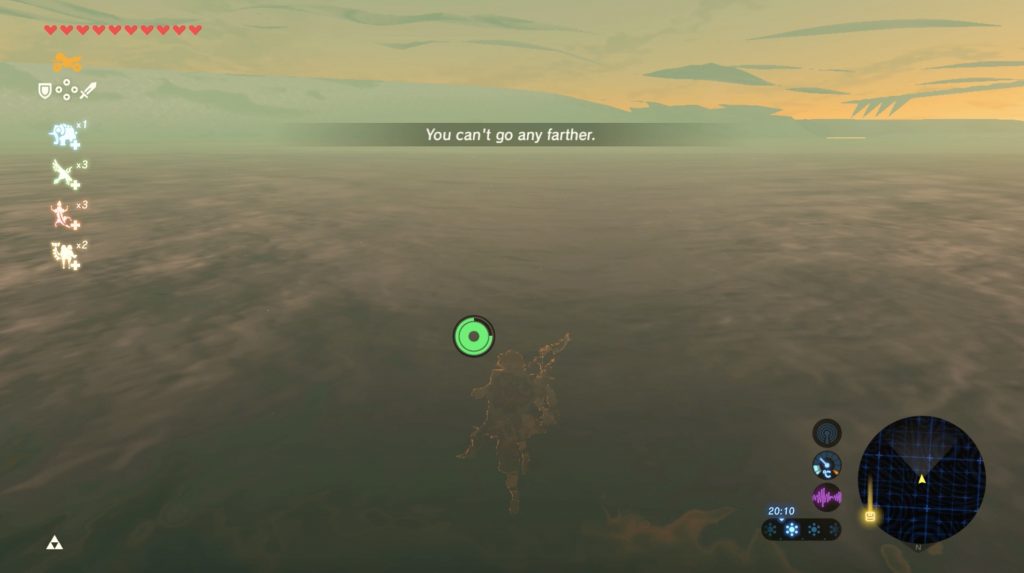 Eventually you’ll start falling, that’s when you know you’re really out of bounds 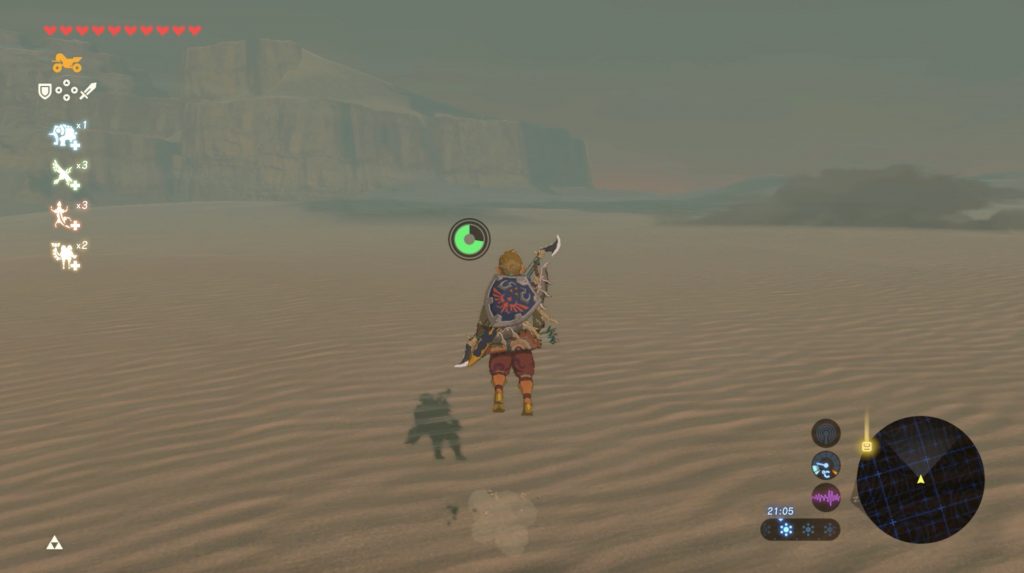 Cross this desert to the cliffs, since it’s not solid 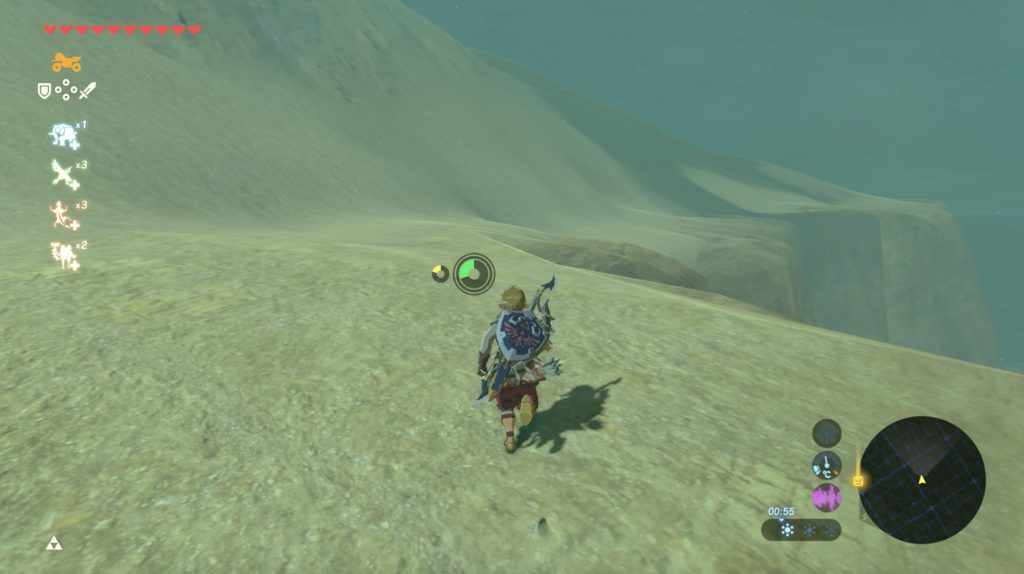 The first solid piece of land beyond Hyrule’s borders!

Of course, there are some interesting things you can do out here, and we’ll cover them in the next section…

What Lies Beyond Hyrule?

For instance, there’s very little solid ground beyond the borders. It exists on certain mountain ranges (like Mount Agaat and the south Gerudo mountain area), and as a small strip of land right on the border, but almost everything else can be walked/fell through like it isn’t there.

This is why moon jump is essential for most of your exploration needs out here. If you don’t have it and fall into the pit, you’ll just be stuck falling for hours on end until the game eventually crashes.

And that’s not a particularly enjoyable experience. Hell, it’s probably not even a short one; the only reason we got the game to crash from going too far out of bounds was because we used a shrine related glitch to go at about 50,000 miles per hour for 20 minutes or so. You’d probably need to leave the game on for about a week if you wanted to see it crash due to Link falling out of bounds.

Other than that, there is some interesting geography out here in the void. There’s a beach like area where the desert meets the sea, which you can never usually explore in game:

And the area at the north of the map has some interesting landmarks, often ones duplicated from elsewhere in the game world.

However, what’s even cooler is what lies beyond the selectable map boundaries in the map screen.

Since for whatever reason, Nintendo shut off much of the game’s physics engine out here in the great beyond. As a result, trying to drop an item will cause it to float in mid air: 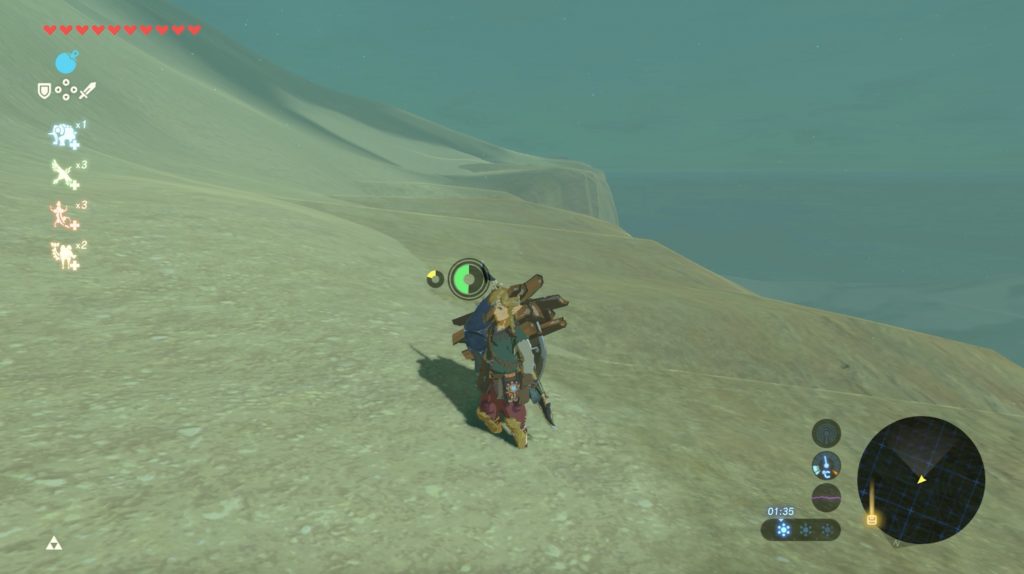 Plus a fair few other things, like arrows passing through the ground, meat not cooking and campfires permanently softlocking the game.

What’s more, it’s not just physical objects that break. No, projectiles get stuck too. So you can turn the Master Sword beams (plus likely fire/ice/thunder rod projectiles) into an endless spinning cyclone of death. 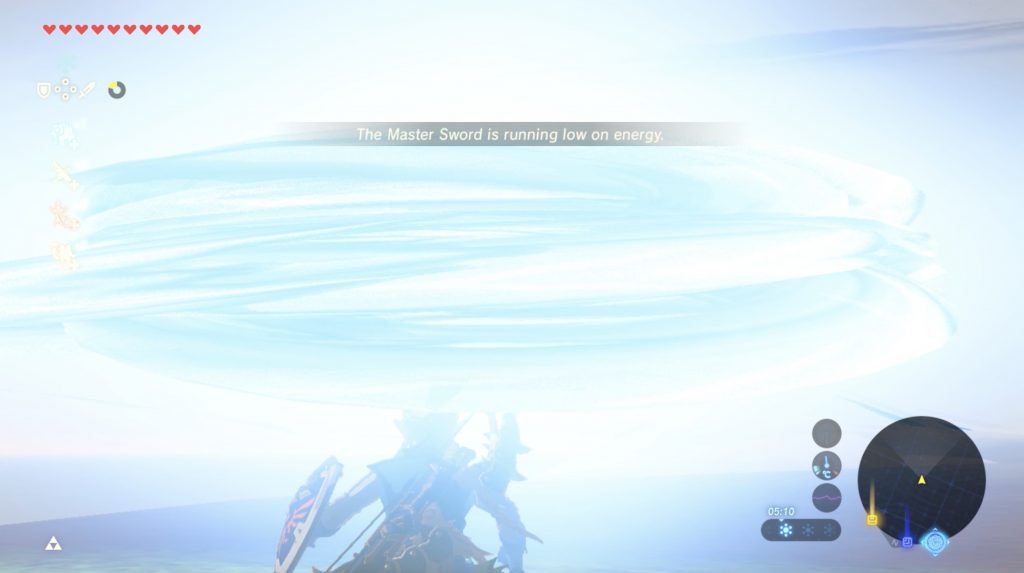 There are probably other neat effects here too, so try some stuff out. You’re sure to see some interesting object interactions in this messed up world.

Saving/Placing the Travel Medallion Out of Bounds 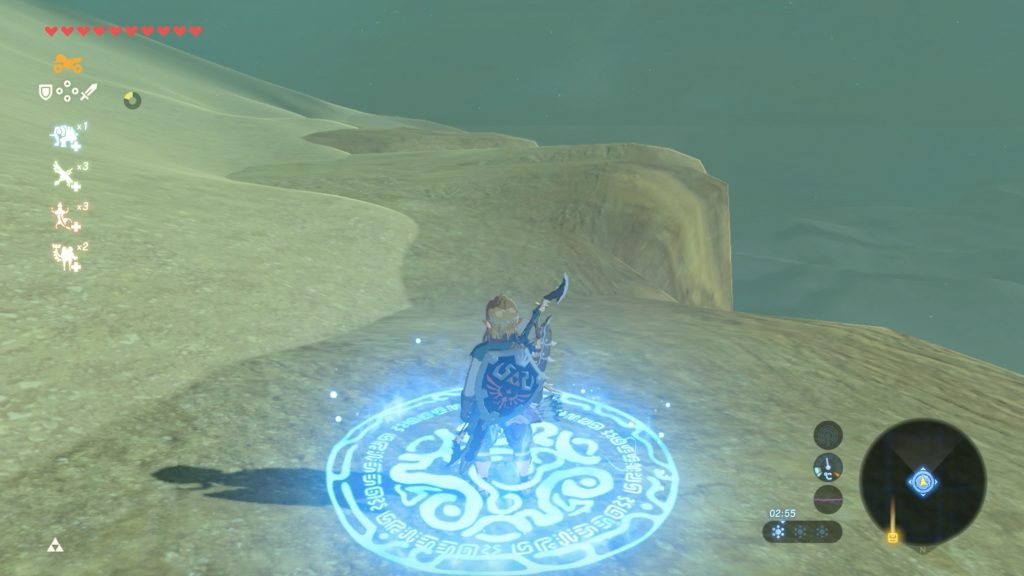 Here’s a Travel Medallion we placed outside of Hyrule

Regardless, as cool as this glitch is right now, its effects are limited without a way to get out there easily in future.

After all, moon jumping towards the border for 20 minutes every time you wish to test something out is a pain in the ass.

So you’re likely wondering how you can put a Travel Medallion here. Or save and reload.

Well, as it turns out, fairly easily. Yep, there’s actually a way to disable moon jump and re enable the Travel Medallion outside of Hyrule!

Via the Master Cycle Zero of course! Yeah, Nintendo wasn’t smart enough to disable this bike when you’re out of bounds, so you can call it in, then ride it to cancel moon jump.

Of course, that doesn’t remove all limitations. Oh no. Both reloads and the Travel Medallion have caveats to them too, especially when used outside of the map like this.

For instance, if you save and reload here, you’ll reappear in the Shrine of Resurrection. Not sure why this occurs, but it does, and it’s annoying as all hell. Presumably the developers used this area as a ‘fallback’ in case your coordinates were invalid? Or something like that? 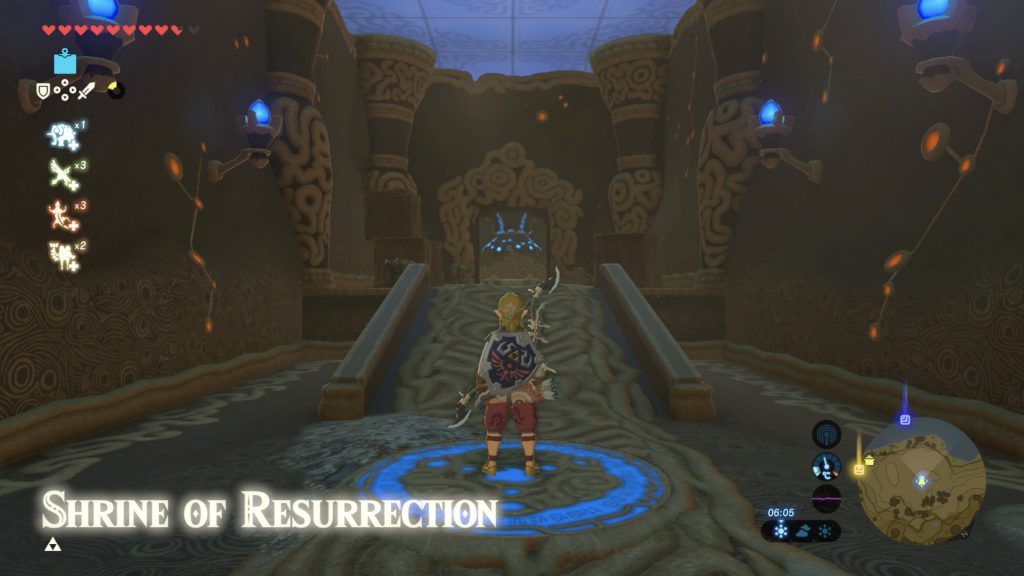 Meanwhie if you place the Travel Medallion too far out of bounds, it becomes entirely useless. That’s because the map cursor can’t go past the borders, and will hence be unable to select a warp spot placed there. 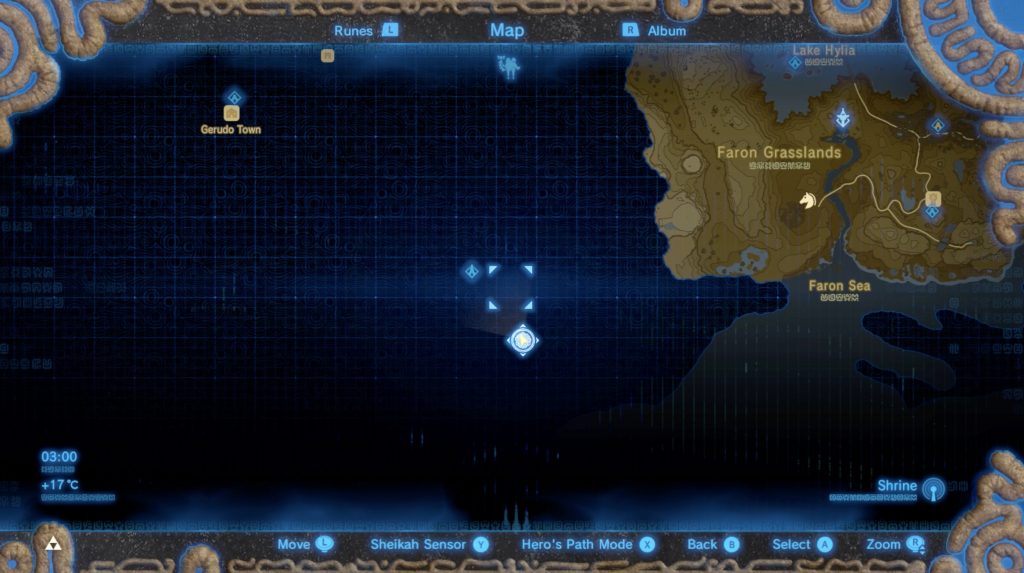 Still, that’s not a deal breaker. Places like Mount Agaat are both past the world borders and inside the map ones, so you can place your Travel Medallion there if you want to get easy access to the areas beyond the former.

Either way, we’re just scratching the surface. The world outside Hyrule has plenty of interesting things you can do there, and we definitely advise everyone reading this to mess around with different runes, items and powers and see what interesting things they can find here too.

For now though, thanks for reading, and we hope you enjoyed our guide on how to escape Hyrule’s borders in the Legend of Zelda Breath of the Wild. If you did, or have anything else to mess around with here, tell us your thoughts on the matter in the comments below or on our not so new Discord server today!

How to EASILY Escape Hyrule in the Legend of Zelda Breath of the Wild (Glitch Tutorial)!