Yesterday, Nintendo posted the first ever trailer for the sequel to the Legend of Zelda Breath of the Wild. Featuring Ganondorf’s resurrection, as well as Link and Zelda’s journey through an ominous looking temple, it was an atmospheric reveal to say the least, and one which set up one of the darkest games in the entire franchise.

However, it also left a lot more questions than answers. Where did the duo go to reach this place? How did Ganondorf end up in this strange temple with a light arm through his chest?

And how exactly would this game play, given its status as a direct sequel to the first Breath of the Wild? All these questions and more were left unanswered in the video, and quickly become the topic of a lot of speculation online.

So in this article, I’ll be doing the same, and theorising about just how Breath of the Wild 2 feels, plays and fits into the Zelda franchise as a whole.

6. Full Fledged Dungeons Will Be Introduced and Replace Divine Beasts

Starting with a theory about the dungeons. Put simply, Divine Beasts will not be dungeons in Breath of the Wild 2.

Instead, I predict we’ll see proper dungeons return again, perhaps with the same sort of general structure as Hyrule Castle in the first game. You’d be able to climb the walls as normal, they’d be themed to their surroundings and they’d have more of a combat/exploration focus than the shrines or Divine Beasts had in the earlier title.

And there are two reasons I think this will be the case. First off, this picture from the trailer clearly shows the temple Link and Zelda are exploring. 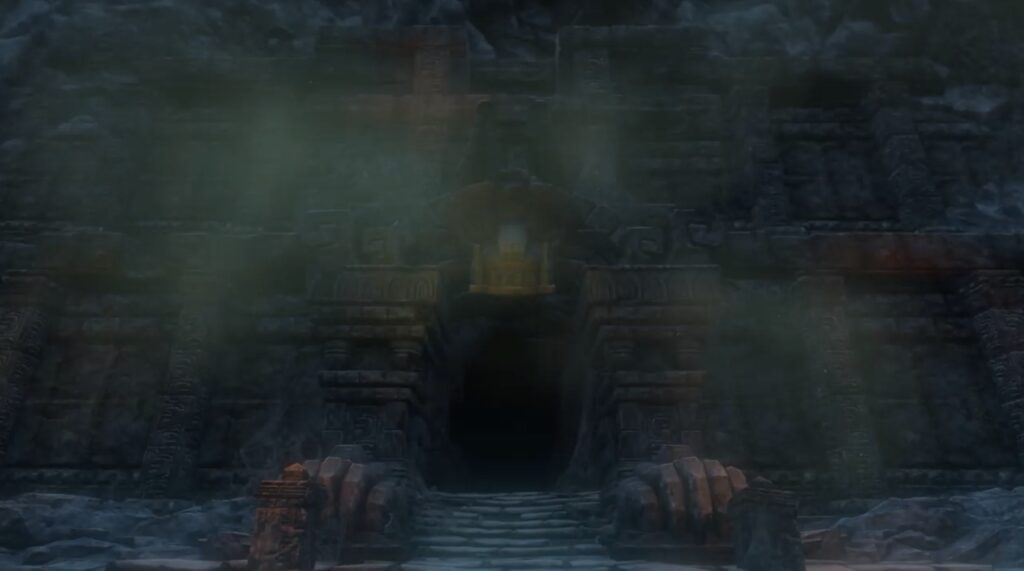 Obviously, it looks as different from the futuristic Sheikah aesthetic as you can get, and indicates another type of dungeon to explore in the game.

But it’s not the only reason I think this, and it’s likely not the only ‘standard’ dungeon in the game either.

And that’s because of fan feedback. Basically, one of the biggest complaints the original game got (after enemy variety, durability and rain) was that the samey shrine interiors were boring to explore, and that the Divine Beasts lacked interesting themes or variety.

It was a common complaint overall, so much so in fact that even the mostly gameplay orientated Mark Brown pointed it out his Game Maker’s Toolkit video on the topic: 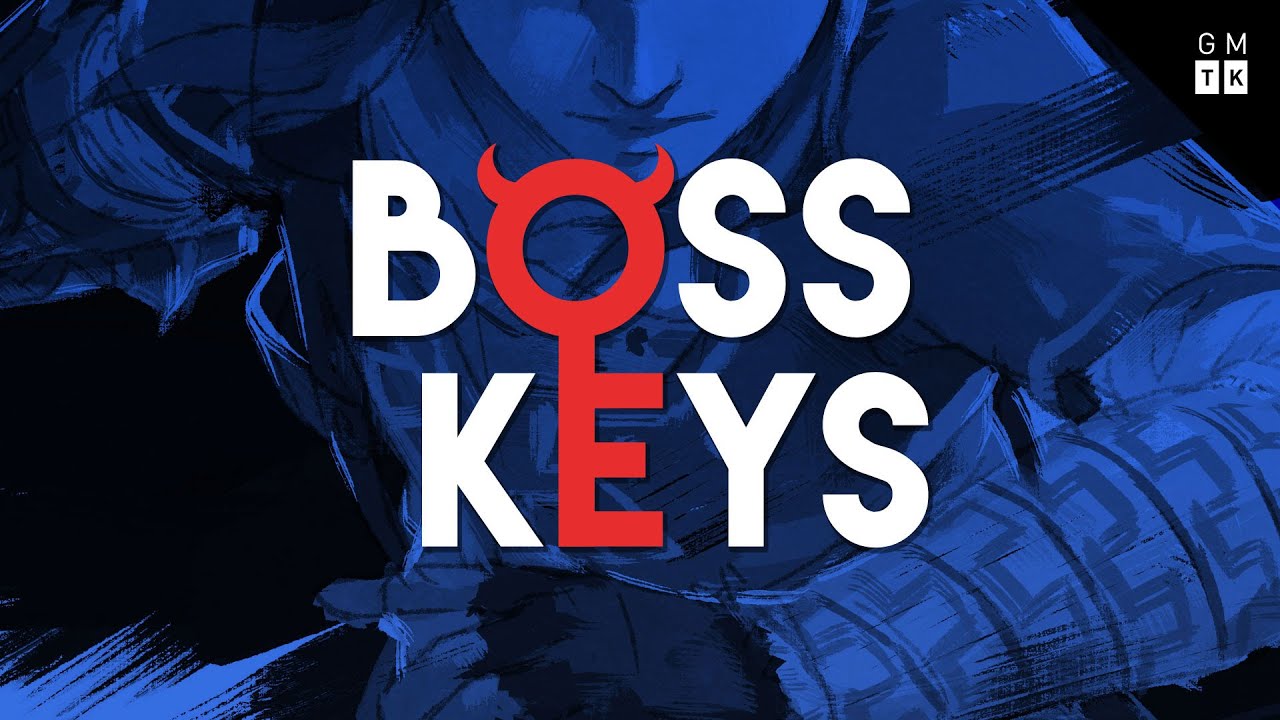 So I believe Nintendo looked at this feedback and learned from their mistake here. Especially given that in recent times, they’ve actually done that a lot, with both major changes (Breath of the Wild and Mario Odyssey’s non linearity) and minor ones (Mario Maker 2’s online play with friends) being incorporated into their game design philosophies.

Hence it seems like they scrapped the Sheikah aesthetic and samey shrine/Divine Beast setup, and replaced it with traditional, more exploratory dungeons as demanded by fans and critics.

Still, enough sure fire bets for now. Onto some more risky ones…

Namely, that Malice will play a bigger role in this game than it did the last. For those who don’t remember, Malice is the toxic substance Ganon left in his wake when he destroyed Hyrule. It coats much of Hyrule Castle, Castle Town and the Akkala Citadel, it was used alongside the Blights to hijack the Divine Beasts and it’s the substance Dark Beast Ganon is made from in the final battle. 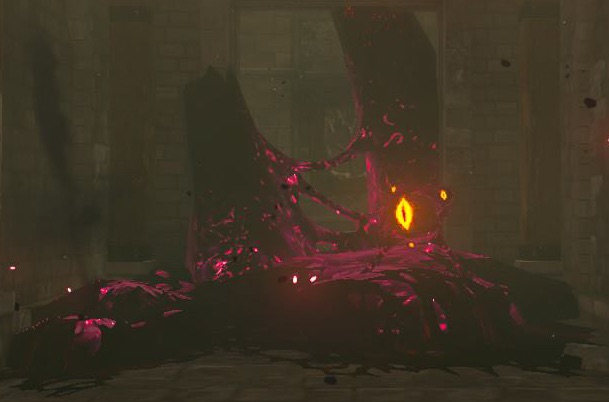 Thing is, in those situations, it didn’t really do much that lava or poison couldn’t have. Oh sure, you could shoot an eye to get rid of some of it, but the actual substance was practically a background obstacle rather than an active threat.

I think that’s gonna change in Breath of the Wild 2. Now the substance is clearly being used to reanimate Ganon’s corpse, and you can see it take over a rat in the trailer too. 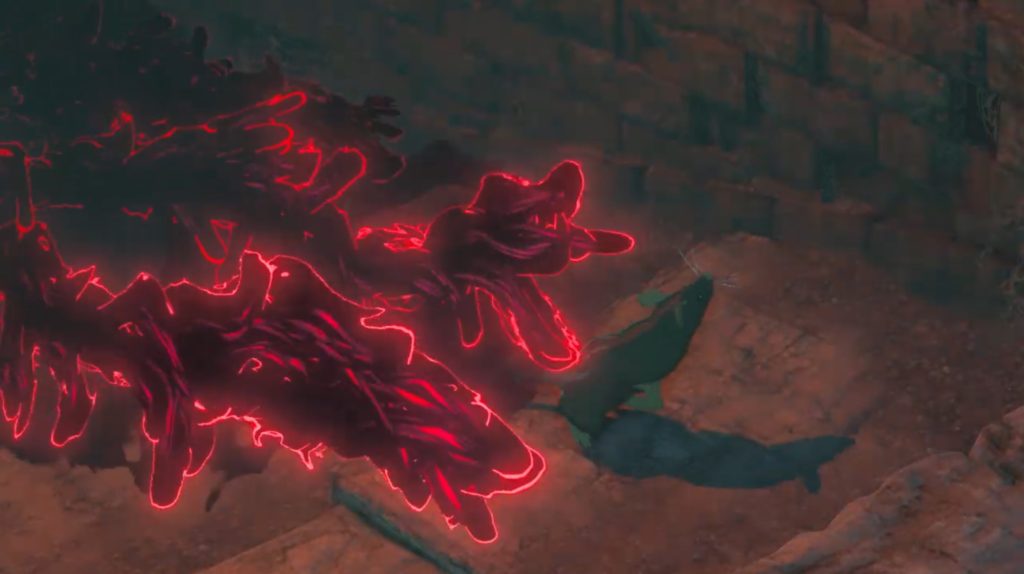 So it’s probable the stuff is being used for demonic possession esque purposes this time around, and that things like enemies may well have it control them now. Maybe it’ll provide a way to introduce a new class of enemies, malice controlled beings whose power is increased to ungodly levels in exchange for very little in the way of health or durability. Perhaps it’ll control other sentient characters, in the same way Ganon took over Zelda in Twilight Princess.

Or maybe we’ll just get new enemies made from it. After all, we need a few ghosts and zombie like undead in this title, and malice could provide a way to reanimate those Gibdos, Redeads and Poes. Either way, I suspect it’s a lot more relevant this time around.

As for a more controversial point, well here’s one. I think it’s likely the Sheikah Slate won’t appear in Breath of the Wild 2.

Yeah, it sounds insane I know. It was basically the main focus of Breath of the Wild, and provided them a means to introduce runes and replace traditional Zelda items. Surely it’ll come back, right?

Well, maybe not. Indeed, do you notice something about the Sheikah Slate in this game’s debut trailer?

Yep, it’s gone. Not clipped to Link’s trousers, not being held by Link or Zelda, not present anywhere in the video at all. 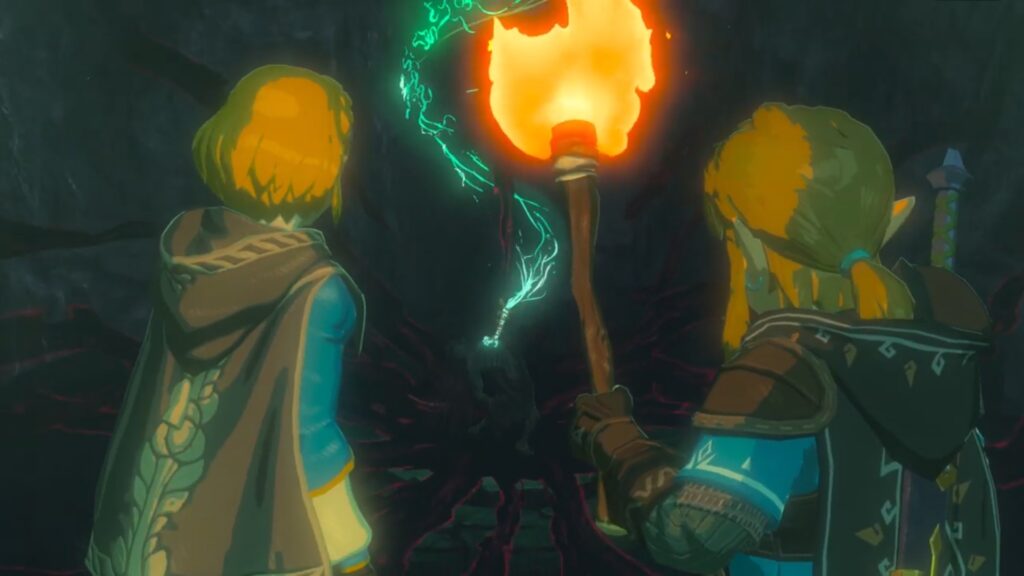 There should be a Sheikah Slate here, but there clearly isn’t one

Seems kinda strange if the device is in the game, right? After all, the only scenes in the original where it wasn’t present involved memories set a hundred years in the past, and this one takes place right after the original game.

So there’s a good possibility Nintendo have decided to scrap the concept altogether, and will have found some other way to give you items and abilities instead. Perhaps you’ll be able to buy or find items throughout the overworld again, and those will give you abilities like the hookshot or grappling hook. Maybe there’ll be another Link Between Worlds esque item rental system.

Or perhaps there’s a whole new mechanic set out for this, it’s Nintendo after all. And the trailer may have shed some light onto what that mechanic is…

3. The Green Energy/Hand is the New Sheikah Slate

Aka the glowing energy that Link ends up absorbing into his hand midway through the trailer. It’s clearly an important part of the game, it’s featured in the thumbnail for the video on Nintendo’s YouTube channel and gets a lot of focus in the trailer. 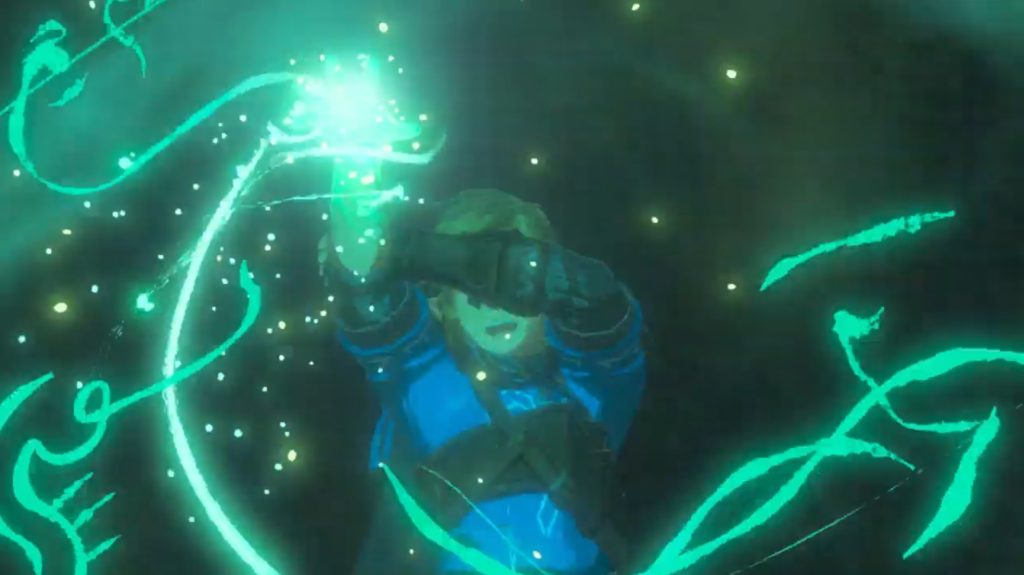 Which makes me think; perhaps this is how he gets his abilities this time around?

After all, there’s concept art showing Link with a mechanical arm, and said arm has the ability to do things like shoot bombs or use a grappling hook. That shows one way this sort of setup could be implemented. 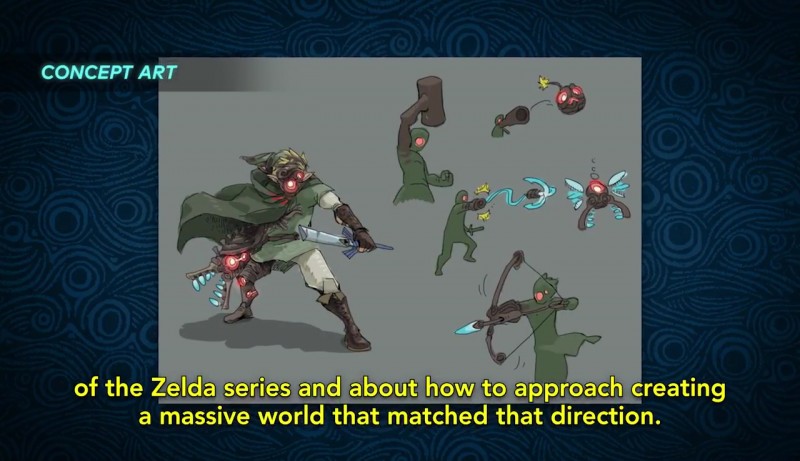 Or it could just be done with magic instead. Perhaps Link literally uses the power of the Triforce of Courage to do shoot magic blasts and control objects through his hand, like some sort of high level psychic. That would be incredible, and would be a perfect way to expand on the rune system from Breath of the Wild.

And hey, speaking of unused concepts…

It seems like other unused concepts may make a comeback too. For instance, the same GDC presentation that showed Link with a mechanical hand also showed a picture of what appears to be Ganondorf standing atop a floating castle/temple: 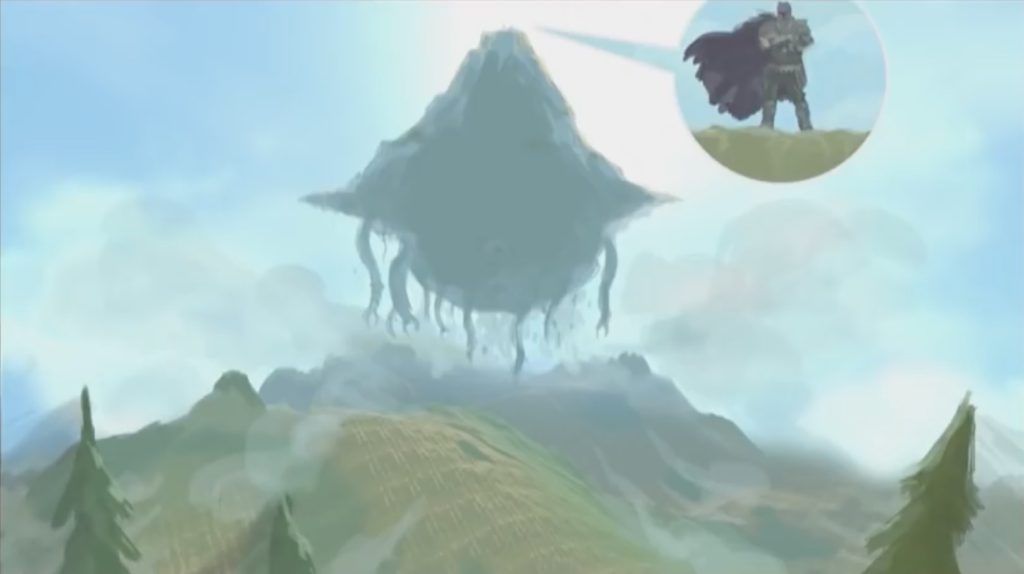 Oh hey Ganondorf, what you doing there?

Which in turn ties in rather nicely to the end of the trailer, where Hyrule Castle seems to soar into the sky and become an ominous floating dungeon high above the Hyrulean landscape.

Add this to the fact the Master Cycle Zero in the original game was also a scrapped idea put into an update, and well, it’s clear Nintendo are happy to add scrapped ideas back in when they find good uses for them.

This makes me wonder… what else could they bring back here?

Could those old Guardian designs seem a return? After all, the game is going for a more creepy feel this time around, and they’d perfectly match the theme of monstrosity laden beings being resurrected from the depths of hell. The Skyward Sword esque ones wouldn’t go amiss either, and would make for a great way to bring knight like monsters back in the world of Breath of the Wild. 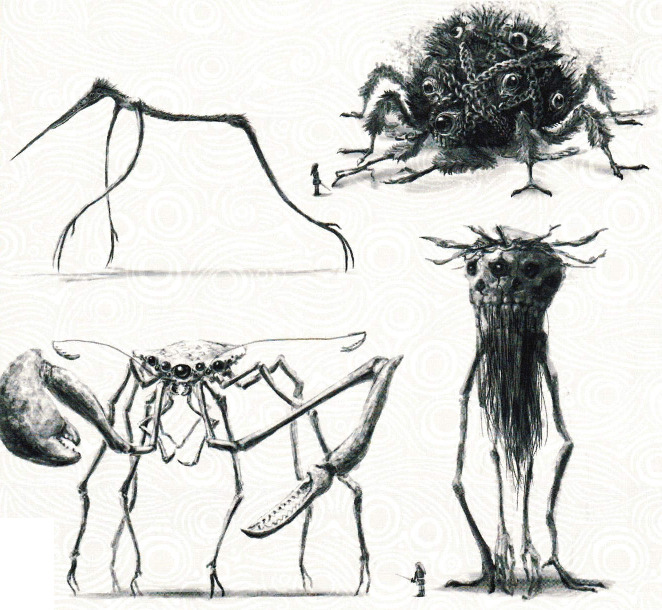 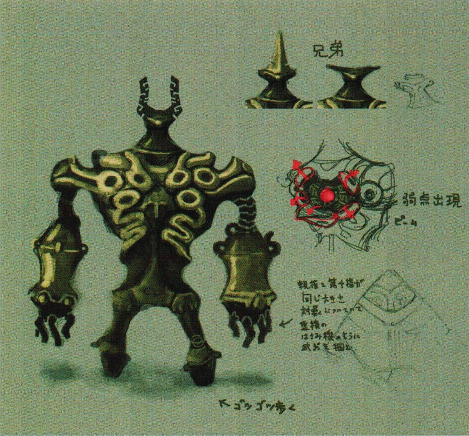 But the most interesting possibility isn’t any of these, it’s the Minish. Yeah, we haven’t seen tiny people and mouse worlds in the series since Minish Cap on the GBA, and they were apparently planned for Breath of the Wild too. 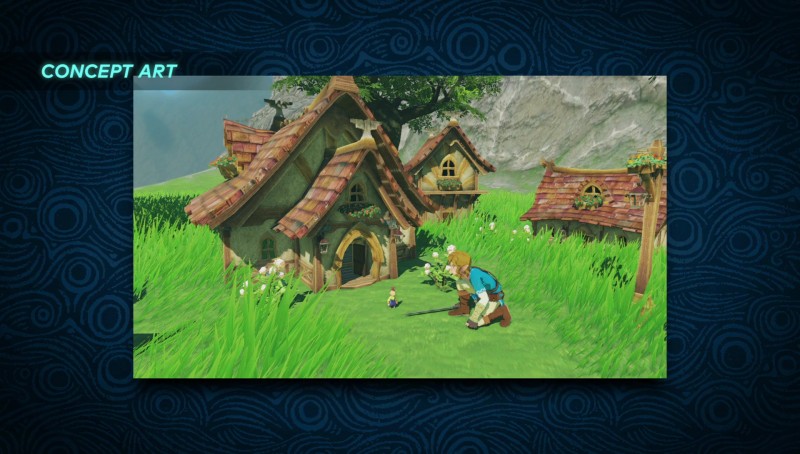 So perhaps this could be their time to shine? It’s unlikely sure, but hey, so was the idea of Ganondorf coming back as a zombie through some of malevolent force. Or you know, the idea of Breath of the Wild getting a sequel in the first place.

1. Ganondorf is From The Wind Waker or Twilight Princess

Still, let’s not forget about the elephant in the room here. The one thing everyone took notice of in the trailer.

Ganondorf. Or more precisely, Ganondorf’s desiccated corpse being brought back from the dead. The idea of that alone was amazing to see, and it provided one of the scariest scenes in the entire series too.

Yet it still left an obvious question:

Why was Ganondorf there? How did his body end up impaled on a magic arm of light inside a creepy temple near Hyrule Castle?

Well, I don’t know for sure, but I have some interesting theories. Most notably, that its his body from the end of either The Wind Waker or Twilight Princess.

And that’s because in both games, Ganon dies by being impaled through the front via the Master Sword. What’s more, that’s also how his failed execution goes in Twilight Princess too, with the wound caused by the Sword of Sages perfectly matching the spot where this green energy holds him in the trailer. 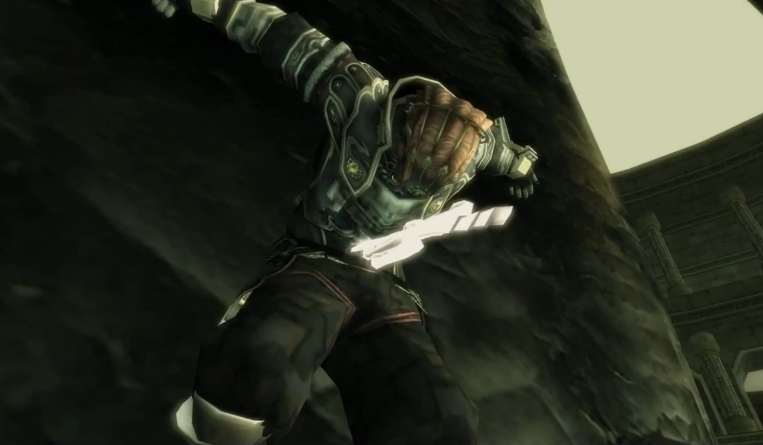 Ganondorf’s failed execution in the backstory to Twilight Princess 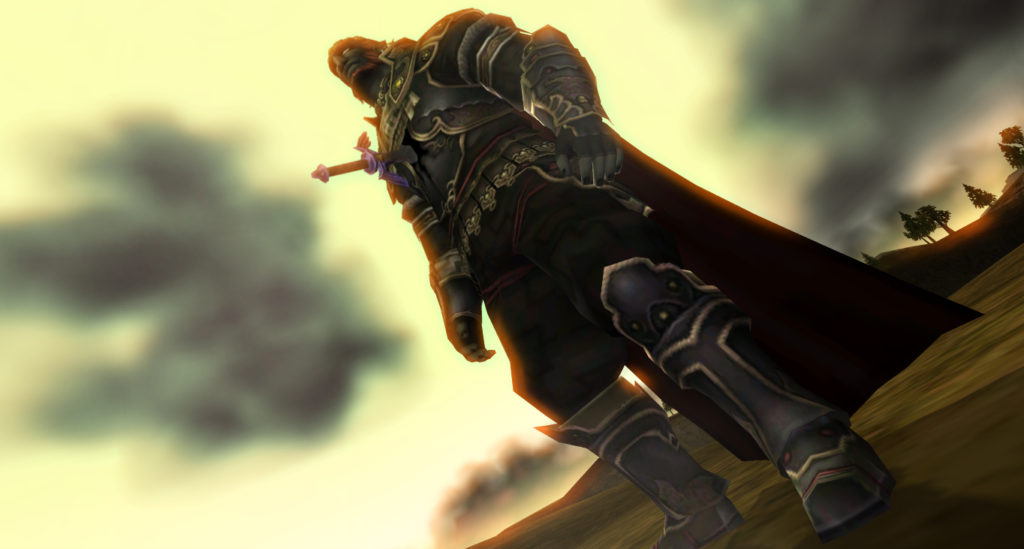 So my thinking goes that perhaps, perhaps this is what Hyrule did to hold him afterwards. Maybe they realised Ganondorf would inevitably be able to come back from the dead even after these ‘deaths’, and worked with the Sheikah to create a custom made prison to hold him at bay. It’d fit really well with the area’s architecture, and the obvious similarities between the pillars/structure around his corpse here and those surrounding Hyrule Castle.

It’d also explain how the Master Sword got relocated in the Wind Waker timeline. After all, it’s not a great idea to leave the ‘Blade of Evil’s Bane’ stuck in some guy’s head at the bottom of the ocean, especially if said ocean drained away. Like it very well might have in Breath of the Wild’s backstory: 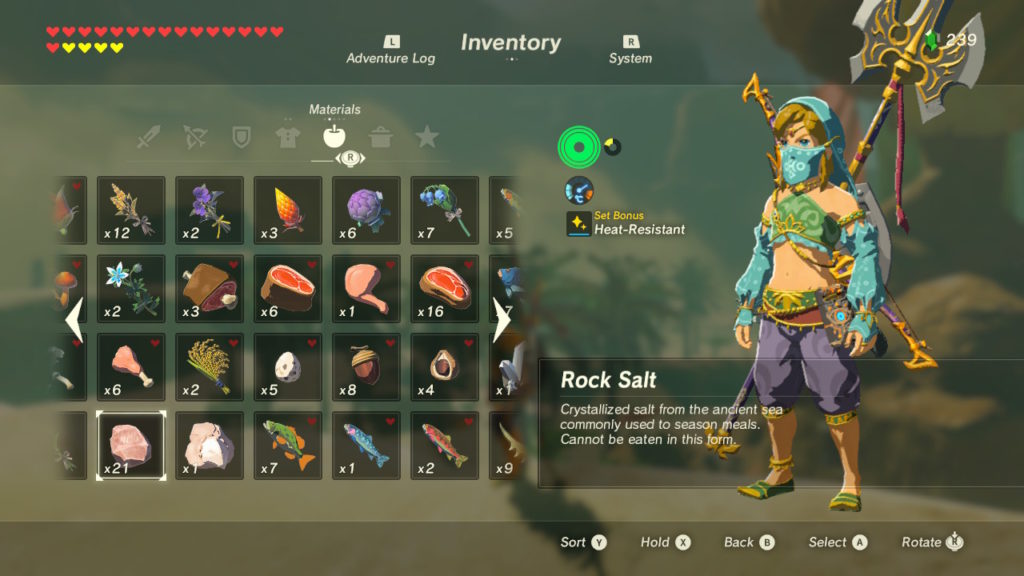 Wonder which ‘ancient sea’ this refers to?

Regardless, the prison theory would fit both games, and would follow on perfectly from Ganondorf’s demise in either of them.

But still, what do you think about it, or the other theories on my list? Could any of these be accurate about Breath of the Wild 2’s story and place in the timeline? Will Nintendo really scrap the Sheikah Slate, or bring back those creepy Guardian concepts again?