As you know, there have been various reality bending glitches found in the Legend of Zelda Breath of the Wild. From Hyrule Overload to World Reset, menu overloading to Apparatus Storage, the game is filled with crazy bugs that completely turn the world of Hyrule upside down.

With one of the most notable of these being the Lizalfos Curse. Activated by pushing a resting Lizalfos off a stone pillar in the Gerudo Desert, this glitch completely broke the reality of Zelda Breath of the Wild, with everything from NPCs to objects and Link himself being twisted and contorted left and right. It was like the laws of physics gave up there and then, and left us with something akin to the Ed, Edd and Eddy episode ‘1 + 1 = Ed’: 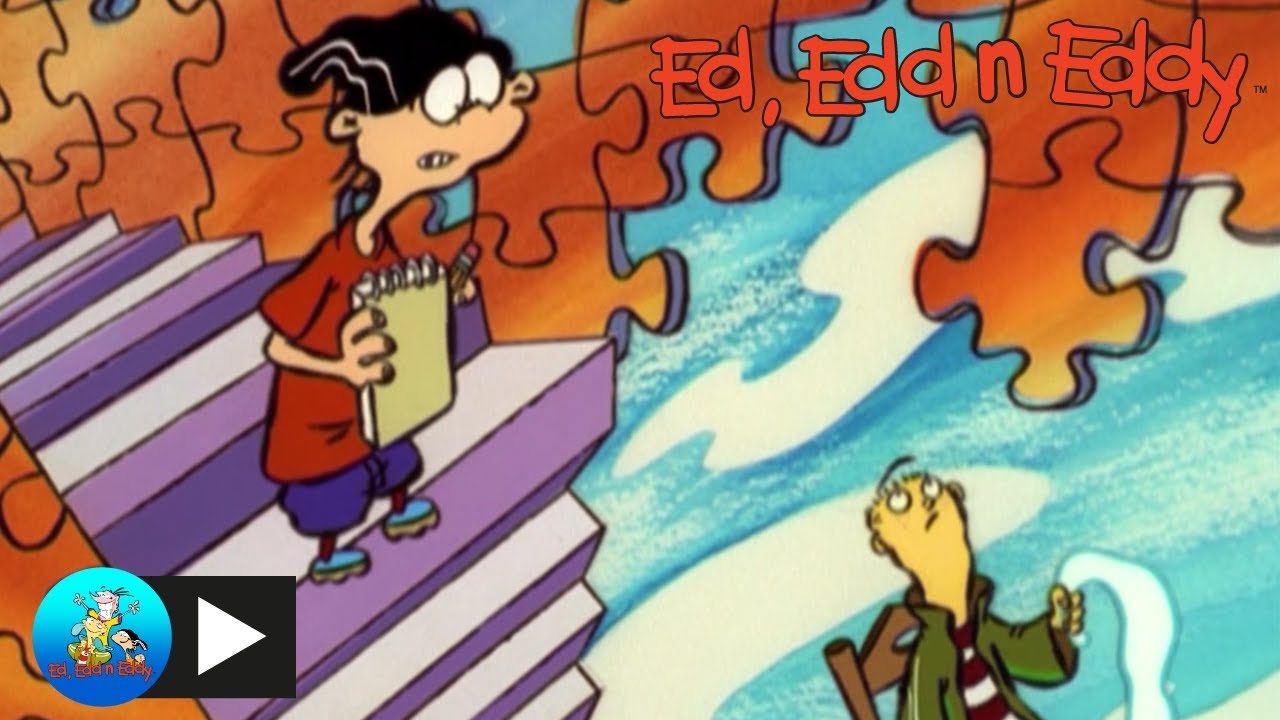 However, the glitch also had a few problems.

For one thing, it relied on a certain kind of hanging Lizalfos only found in a few very specific areas. This meant that you generally never got to use said glitch outside of the Gerudo Desert, or that spot near the Laynaru Tower.

What’s more, it also meant the craziest possibilities could never be explored either. Want to see what Ganon did in this state? Test how shrine structures react with broken physics? See Link pick up the Master Sword while going haywire?

Tough luck mate. The only usable Lizalfos were miles from those things, and the effects would wear off long before you got there.

Worse still, the glitch was also patched in a recent version of the game too. Yep, in the Labo VR update, the Lizalfos Curse was gone entirely. It’s not known why that’s the case, but presumably whatever Nintendo did to speed up the game happened to break this glitch too.

So not only was it limited when it was usable, it was limited in terms of the time you could use it too.

But now that’s all changed.

Now a new, improved glitch has been found that does the same sort of thing. Known as the Hinox Curse, this was one is ridiculously simple to pull off, and can be used to screw the game almost anywhere in Hyrule.

Here’s our video detailing how it works: 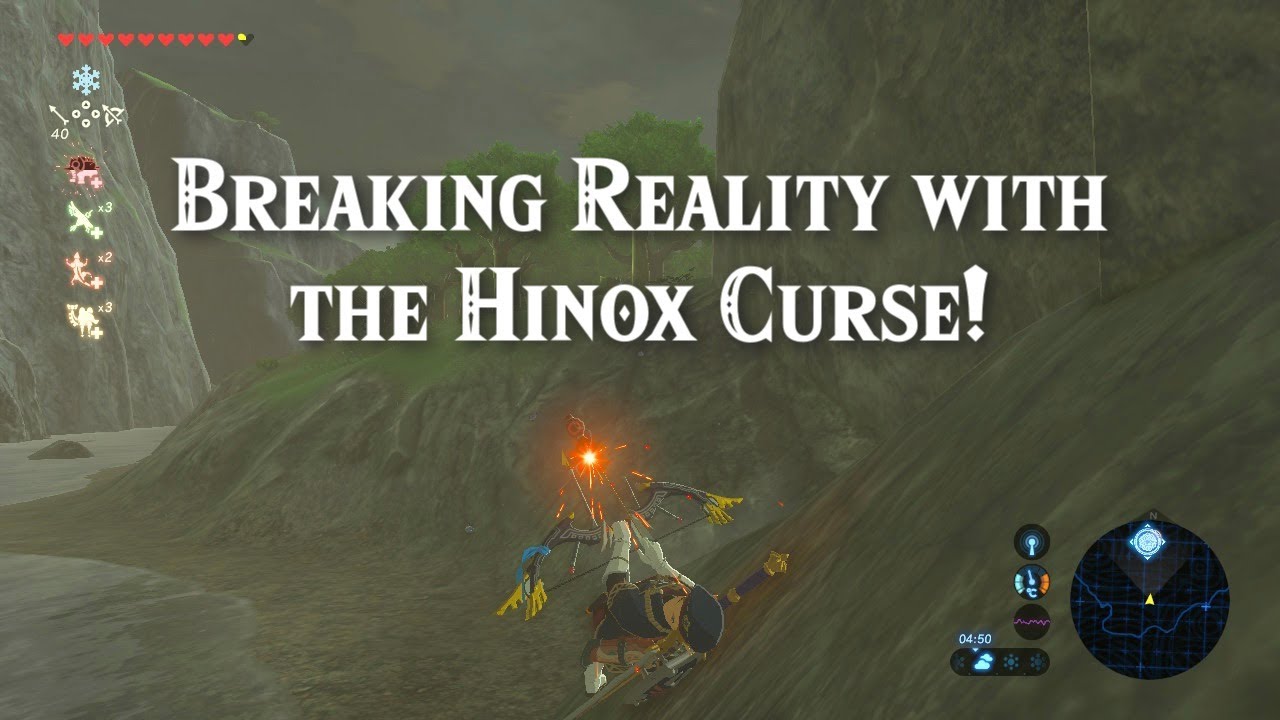 Plus a quick text based guide…

How to Activate the Hinox Curse

And when we say that, we mean it. Link’s body has a tendency to distort and rotate in all kinds of unnatural ways, to the point where his head spinning 360 Exorcist style wouldn’t be completely out of the ordinary. 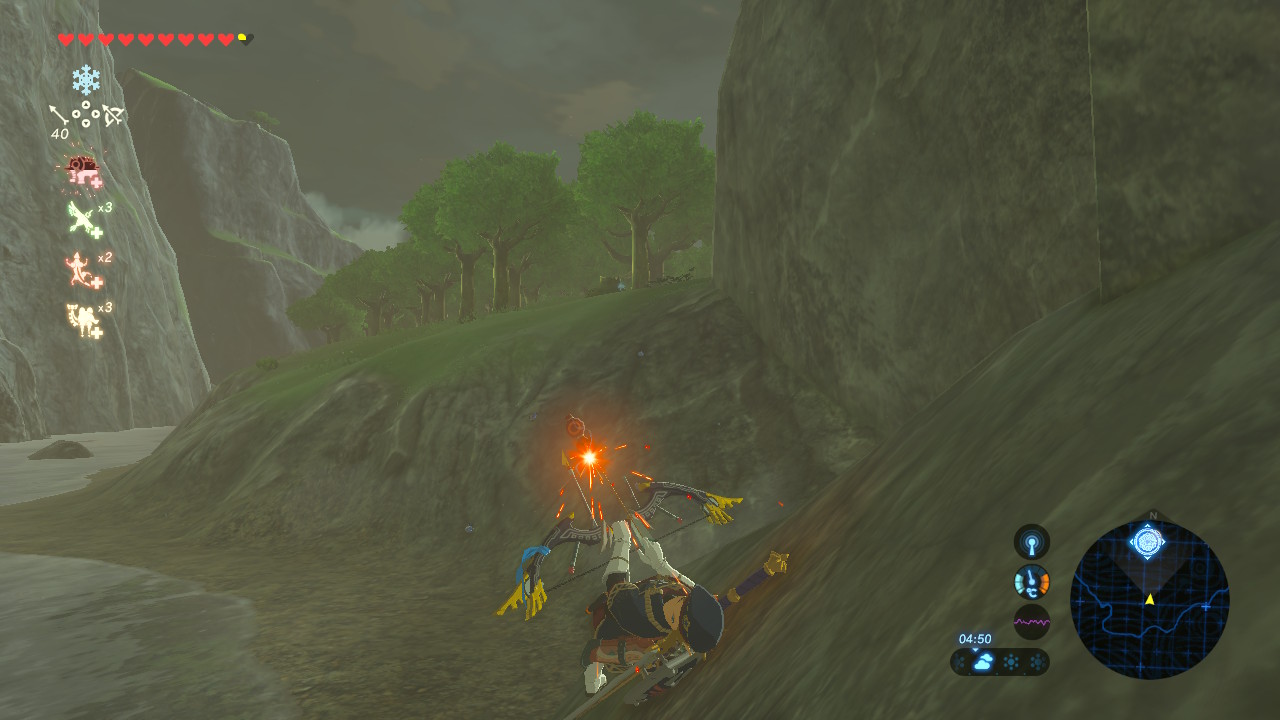 He also has a tendency to run upside down, or at all kinds of weird angles too. Which way is gravity pulling him here anyway? 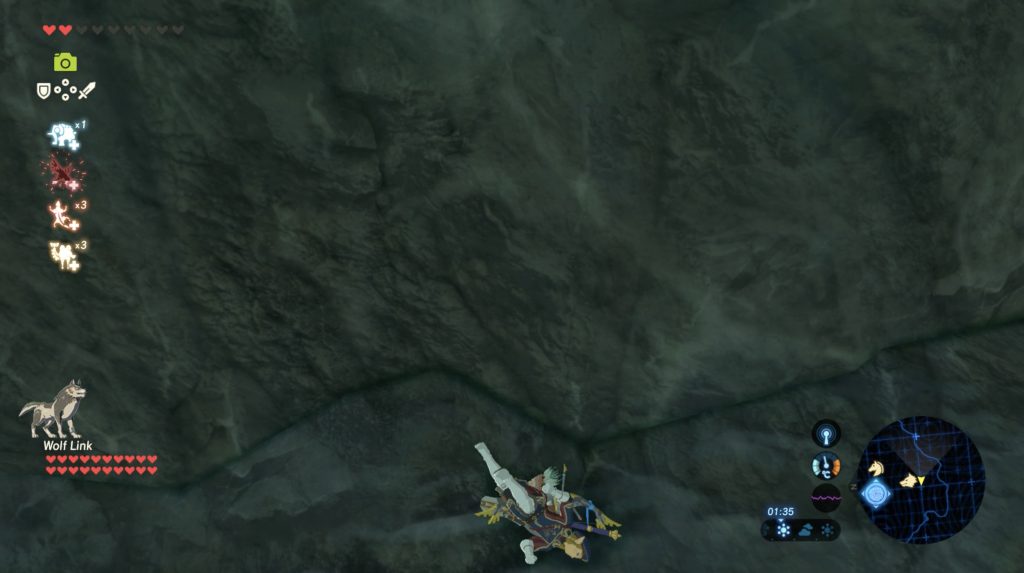 Gravity is a bit out of wack here isn’t it?

Meanwhile the camera loves showing you things it really shouldn’t: 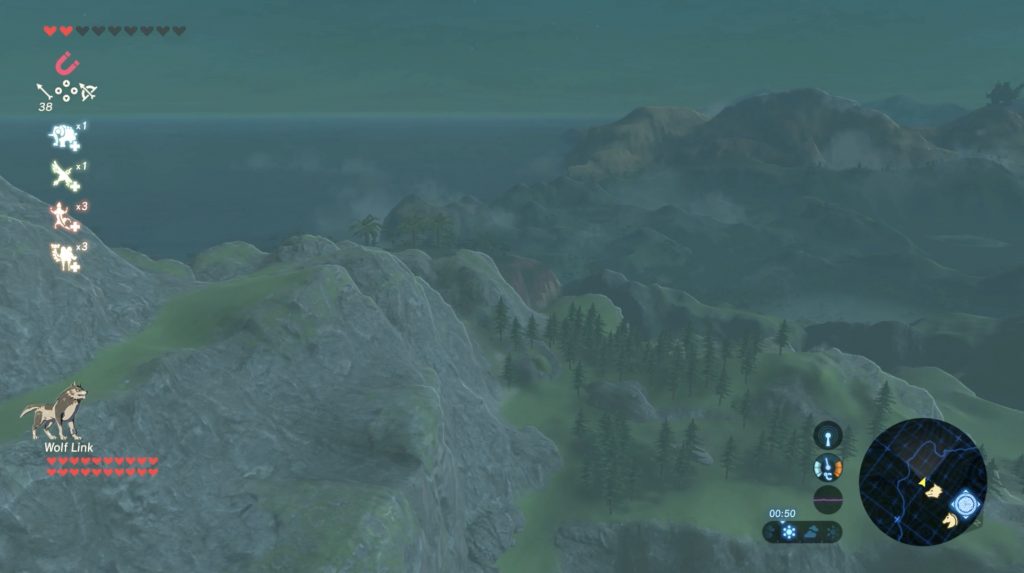 No, there’s nothing to see up here

Your horse gets stuck in trees and objects: 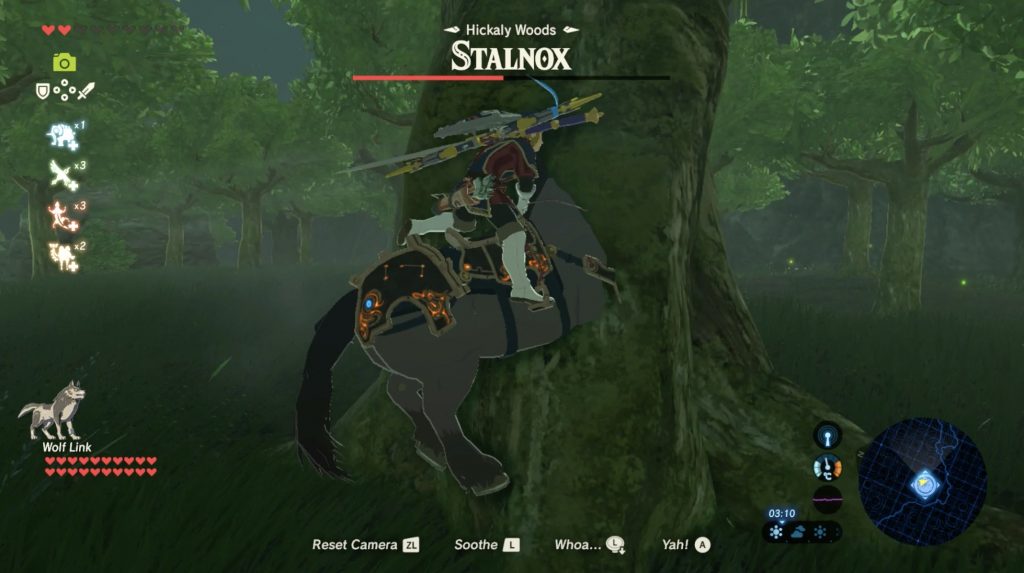 For some reason, Link’s horse wanted to become one with this tree

Wolf Link ends up upside down under the floor: 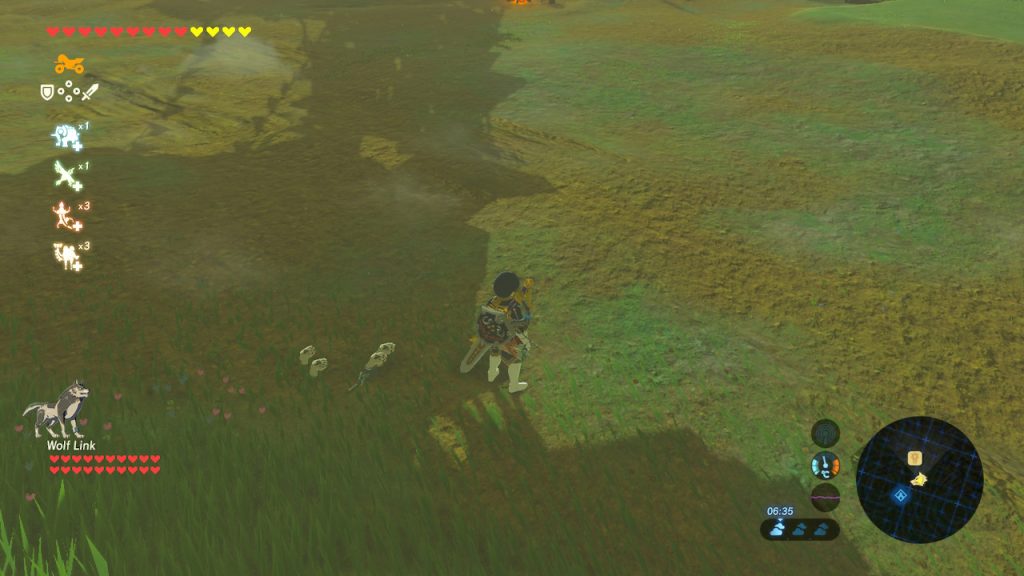 Other horses happily run through the sky: 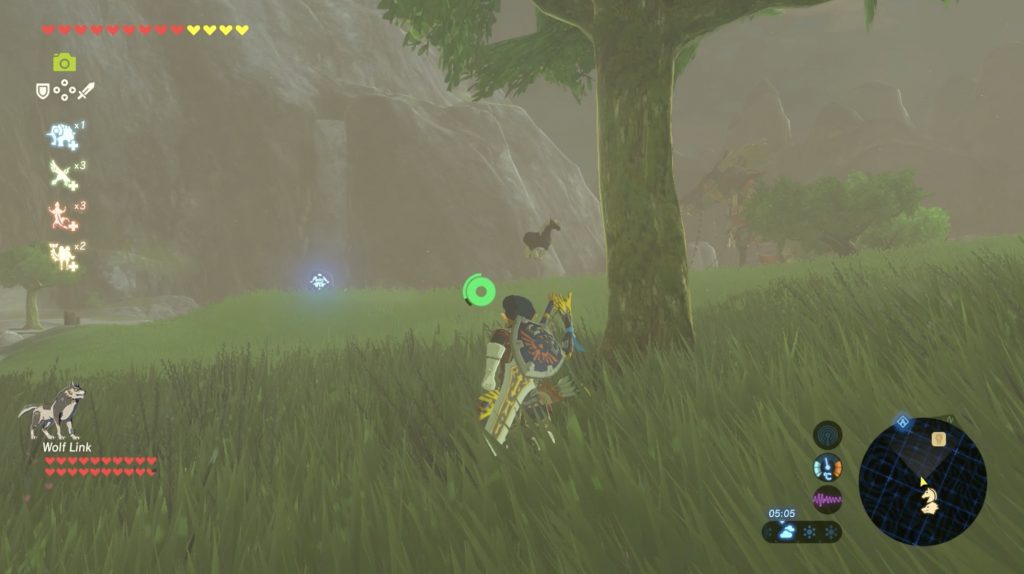 Is that a Hylian Pegasus? Eh probably not

Plus weird things happen to shrines. Like the elevator platform going off for a walk:

Interestingly, if you can have that platform make it’s way to another shrine, you can probably use it to enter that one instead. Or skip various quests.

Or the entire shrine doing somersaults. Yeah, we wouldn’t believe that if we didn’t see it either:

You can also screw up cutscenes too, which looks… interesting:

So yeah, try it out for yourself at one point. The effects are as varied as they are ridiculous, and it’ll give you far more replay value for a game that’s all packed to the brim with it.

Either way, thanks to DrillCaramary on YouTube for finding the glitch, thanks to various members of the Zelda speedrunning and glitch hunting communities for their crazy videos about it, and thanks to you guys for reading the article.

If you thought it was interesting, give your thoughts in the comments below, on the Gaming Latest forums, or on our new Discord server today!

Wait, so how do you set up this glitch again?

Sure, that’s it. When they disappear, you’ve done it.

Well for the Stalnox, it’s actually stupidly easy. Lift it up with a metal chest, and carry it to the waterfall. For some reason, the boss seems to have no weight to it, so Link can toss it around like it’s nothing.

For a Hinox on the other hand… the best trick is to lure it out of its territory, then hold a treasure chest in its face. It’ll go passive, and start backing away from the treasure chest, going up walls, into water and in all kinds of places in the process.

Oh cool. What happens when you activate the glitch anyway?

Stuff breaks. It’s pretty random what exactly does, but trust me, you’ll see a ton of insane things happen regardless.

Can I take this across Hyrule?

To some extent, though both a Hinox and a Stalnox seem to have a spawn range. Still, it should affect a pretty big part of the map either way.

How can I get Link to move where I want him to?

To some degree you can’t; this glitch completely screws up everyone’s movement options. If you’re really unlucky, it may help to take damage to push you away a bit/straighten up.

Can you tell me where I can find a Hinox/Stalnox this works with?

Any one on the object map should be fine, assuming there’s a waterfall or other such area to push it into. (type giant into the search box)

Does this glitch work on Wii U, or Nintendo Switch?

This glitch only works on the Nintendo Switch version

Does this glitch cause permanent damage to the game?

No. All effects go away when you save and reload, warp, exit the game via the home menu, etc.