As shown in the trailer below, which was posted by various Nintendo branches earlier today: 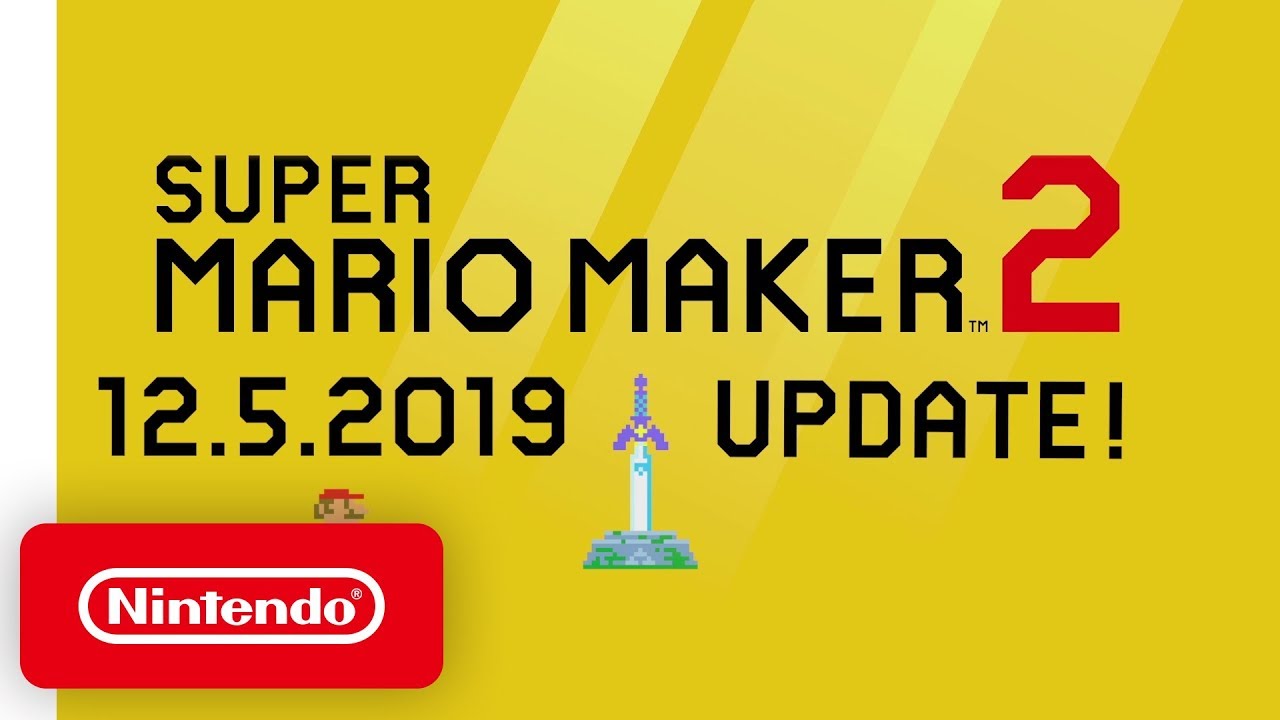 This trailer showcases five major features of the update. Two enemies, three normal objects, plus a very special addition to the game and a speedrun esque additional mode.

So let’s go through them one by one, shall we?

Starting with the Pokeys. These cactus like creatures have been a familiar sight throughout Mario’s adventures over the years, and have been the number one choice for desert levels throughout the franchise.

However, for whatever reason, this didn’t included Mario Maker. Oh sure, desert themed levels became a thing starting with the second game, but Pokeys didn’t get added alongside them.

Still, that’s all changed now. Now Pokeys are coming to all game styles, complete with various tweaks to make them more interesting for level editing purposes. For instance, Pokeys placed in snow levels become Snow Pokeys instead, with Mario being able to stomp on them to turn them into a snowball (which can in turn be chucked at enemies). 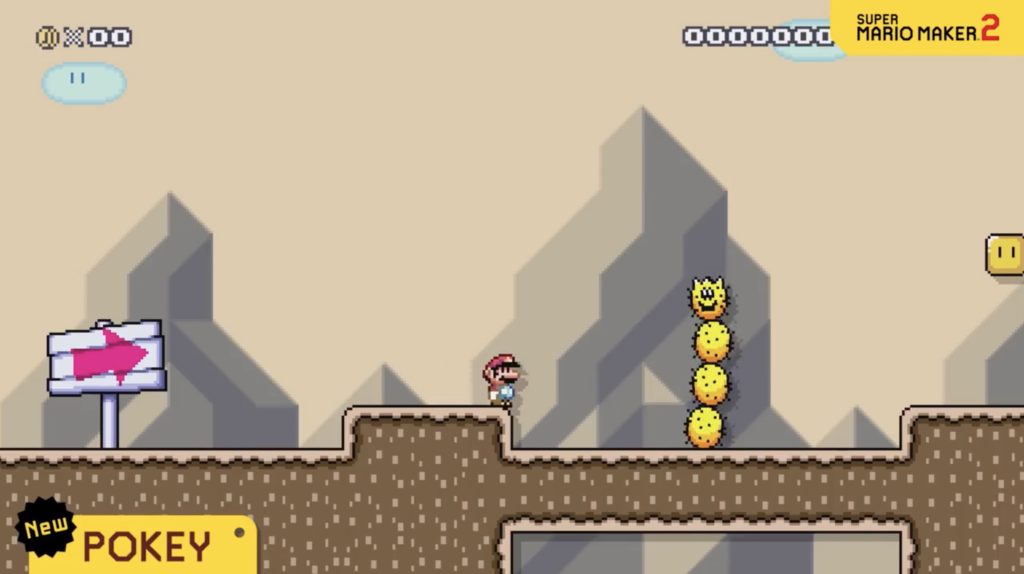 Pokeys are now coming to Super Mario Maker 2. Here’s one in the SMW style

They can also swim in the air in certain other styles too, and be given wings, made bigger, etc like other enemies in the game. 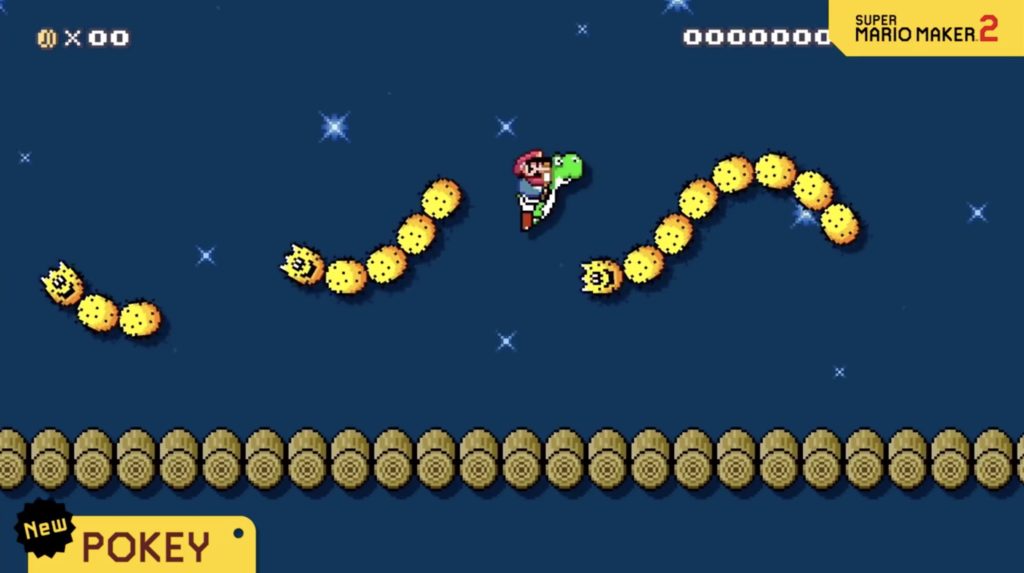 In night themes, Pokeys can take to the air. Giving them wings lets them home in on Mario too

The other new foe of choice are Spikes. These are those green dinosaur esque creatures first seen in Super Mario Bros 3 that chuck spike balls and Mario and co, and they’re also now coming to Super Mario Maker 2. However, the spike balls they throw change behaviour a bit based on the game style, flying through the air as normal in the SMB 1 and SMB 3 styles and rolling on the ground in the SMW and NSMBU ones. This lets them get used as part of puzzles, since they can do things like tilt seesaws, activate ? blocks and be used to take out enemies. 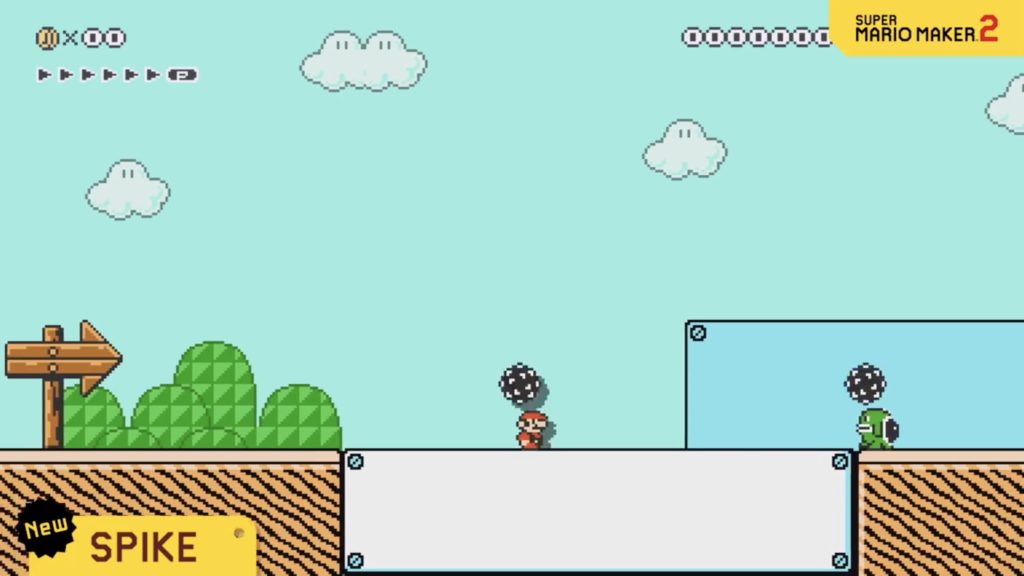 Spikes return as enemies in version 2

And like the Pokeys, in snow styles they have unique behaviour too. This time they throw snowballs instead of spike balls, with said snowballs being objects that Mario can pick up and throw at enemies. 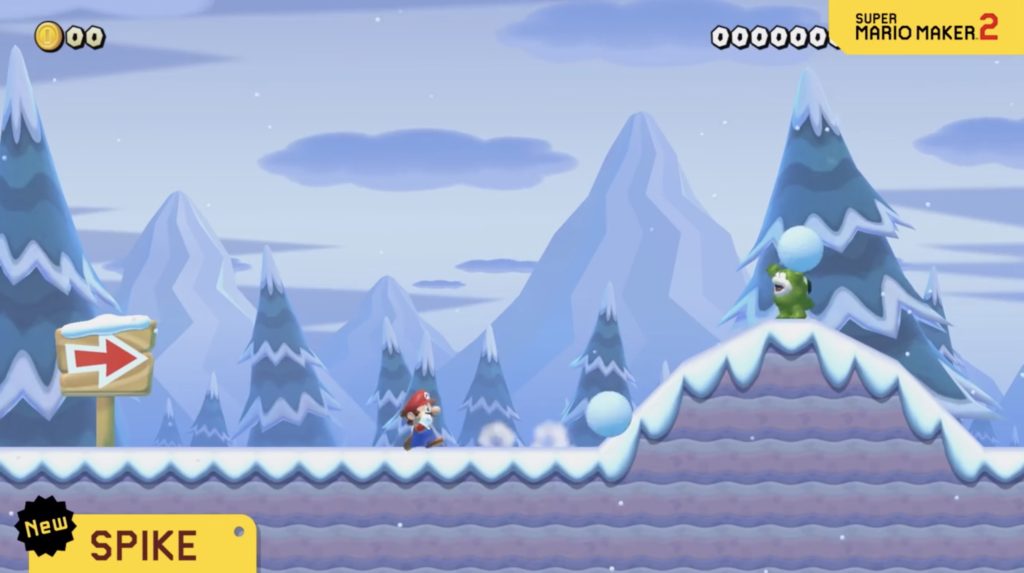 In snow themes, Spikes throw snowballs instead, which can be picked up and used as projectiles

So those are the new enemies debuting in version 2.

But they’re not the only thing being added there. No, as mentioned, three normal objects are being added too.

Namely, Dash Panels, P Blocks and Frozen Coins. The former is a Super Mario 3D World theme exclusive, and lets Mario and co run at high speed, giving them the ability to jump further in the process. Not much to say here, it’s basically something everyone who played Champion’s Road is very much familiar with. 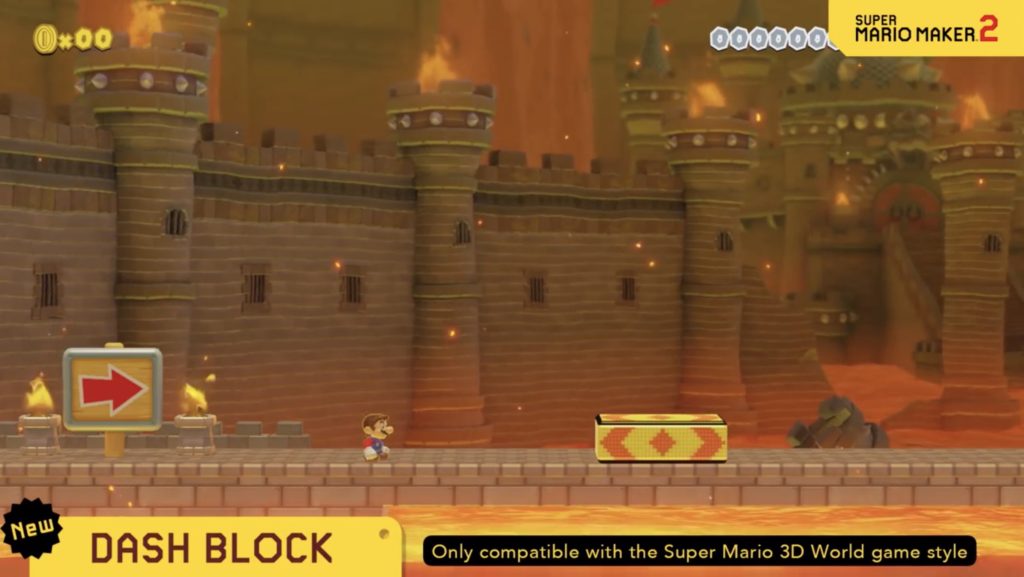 The P Blocks on the other hand, do not appear to be from an existing game. Instead, they’re blocks that become solid/non solid when a P Switch is pressed, providing a stable way for level creators to set up switch specific bridges, platforms and walls. Nothing too special, but it’s neat to see none the less, and it’ll likely be something many creators will use come version 2’s release. 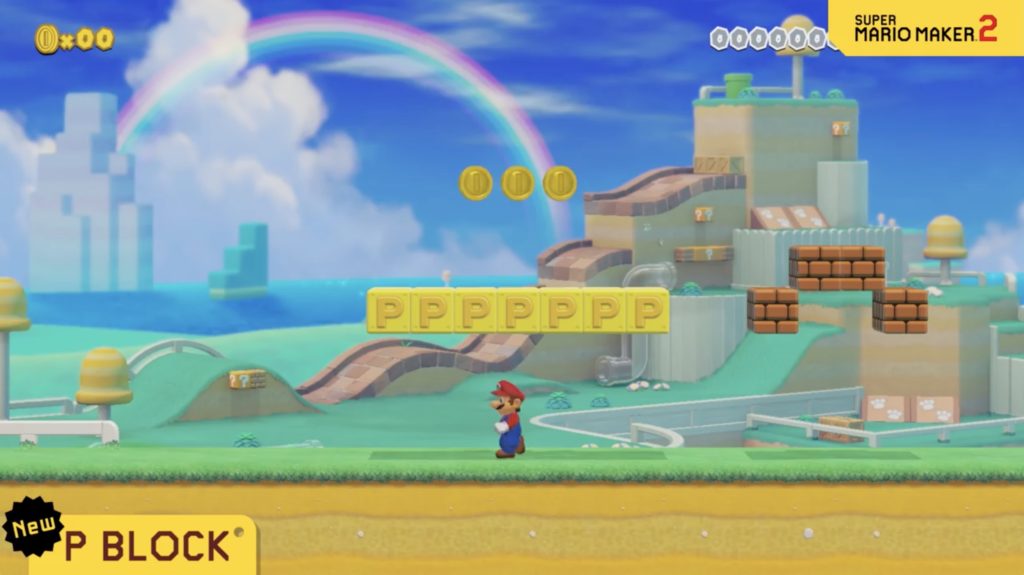 Lastly, we have Frozen Coins. These are ice blocks that melt and turn into coins when fire touches them, and they act roughly like their equivalents do in Super Mario Bros 3. A basic addition sure, but one which is likely going to be surprisingly useful for contraptions and puzzle levels, especially given that any source of fire sets them off (instead of just Mario’s fireballs + enemy attacks). 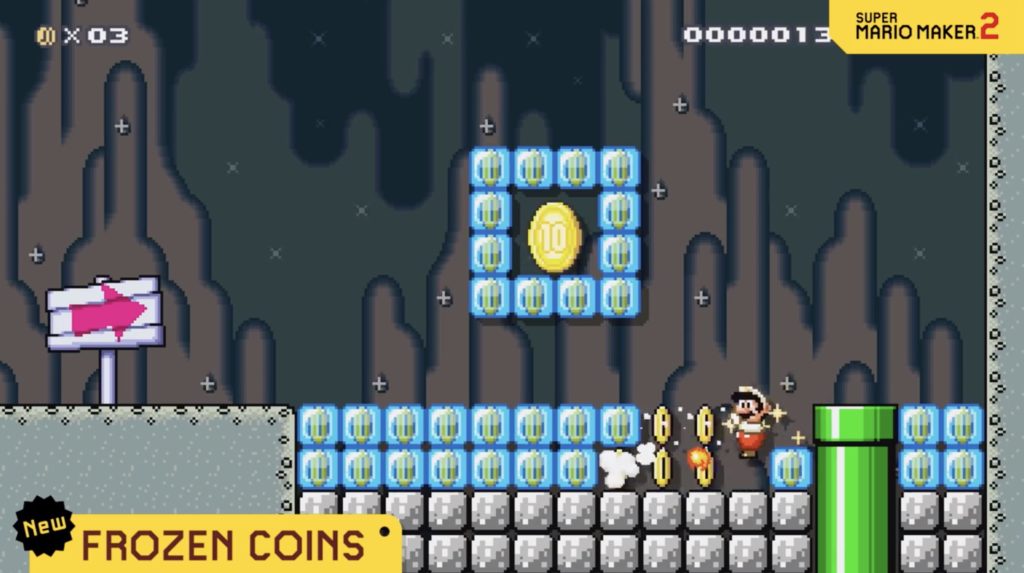 Frozen coins can be melted by fireballs… 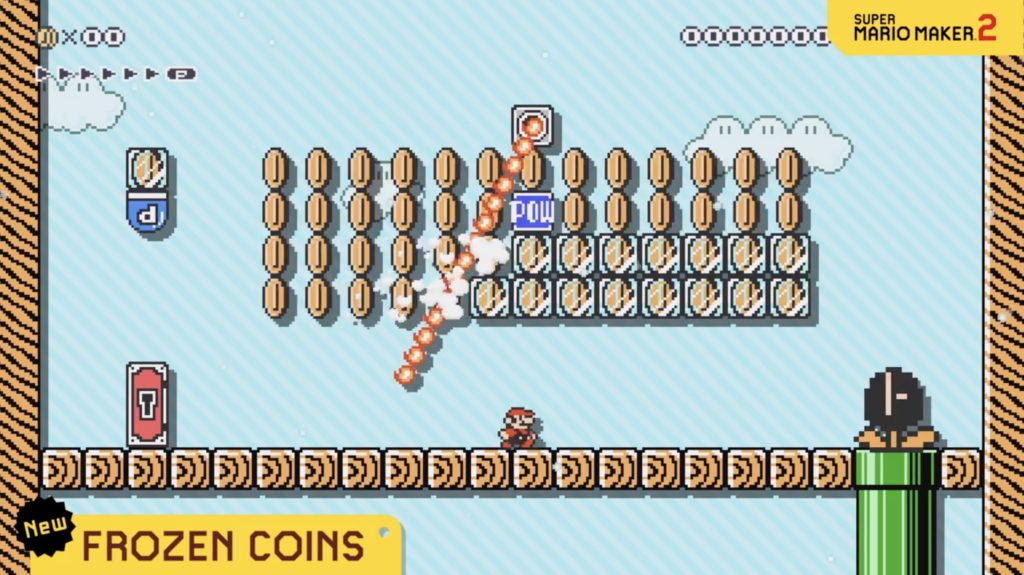 Outside of objects, there’s also a new speedrun esque mode too. Here you’ll race against other players to see who can complete Nintendo made courses fastest, complete with all your opponents being represented in games as Ninjis. It’s a fun extra, and when seen in game, looks a lot like those old YouTube videos featuring 100 people’s attempts at the same level. Or perhaps your average Super Mario Royale game. 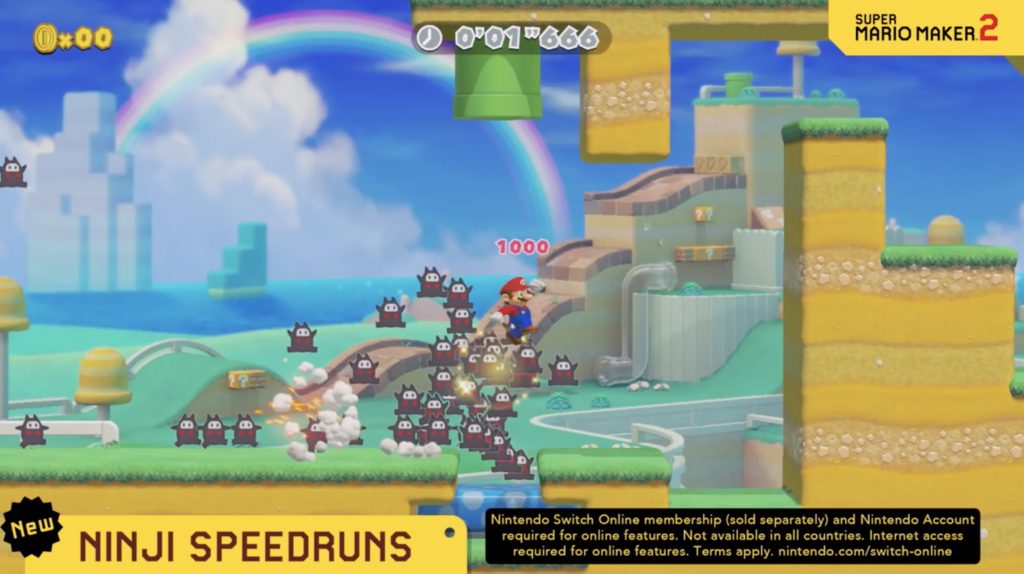 Ever wanted to race against the ghosts of hundreds of other players? Mario Maker 2’s Ninji Speedruns have you covered!

Yet as exciting as these are, they’re not the thing we’re more hyped for. No, that would be the Master Sword, which can be used to turn Mario into Link.

No, we’re not joking. Nintendo is literally adding an item that lets players play as Link from the Legend of Zelda series in Super Mario Maker 2. And it’s not just a visual edit either. 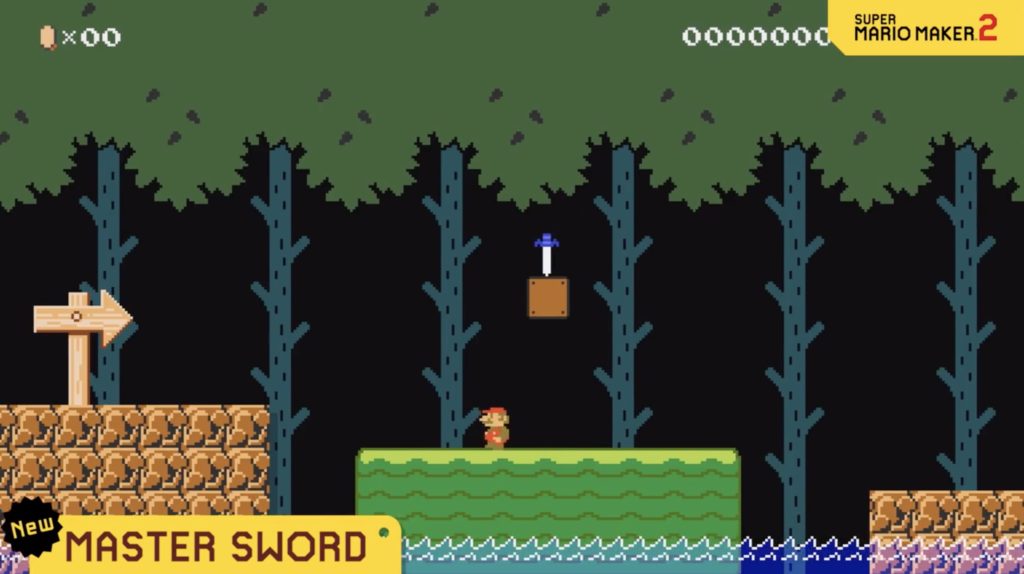 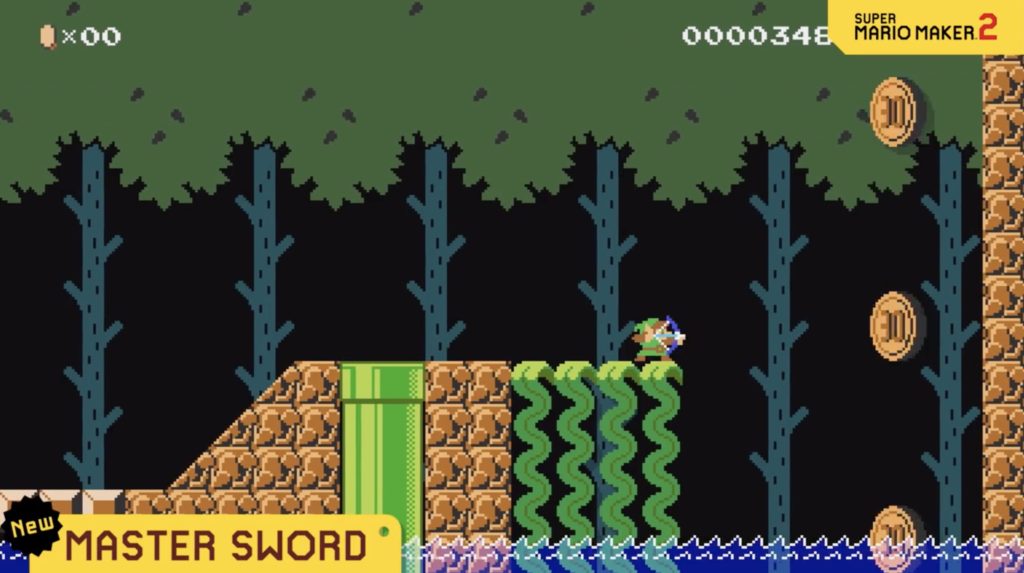 Getting the Master Sword turns you into Link, letting you use his items and abilities 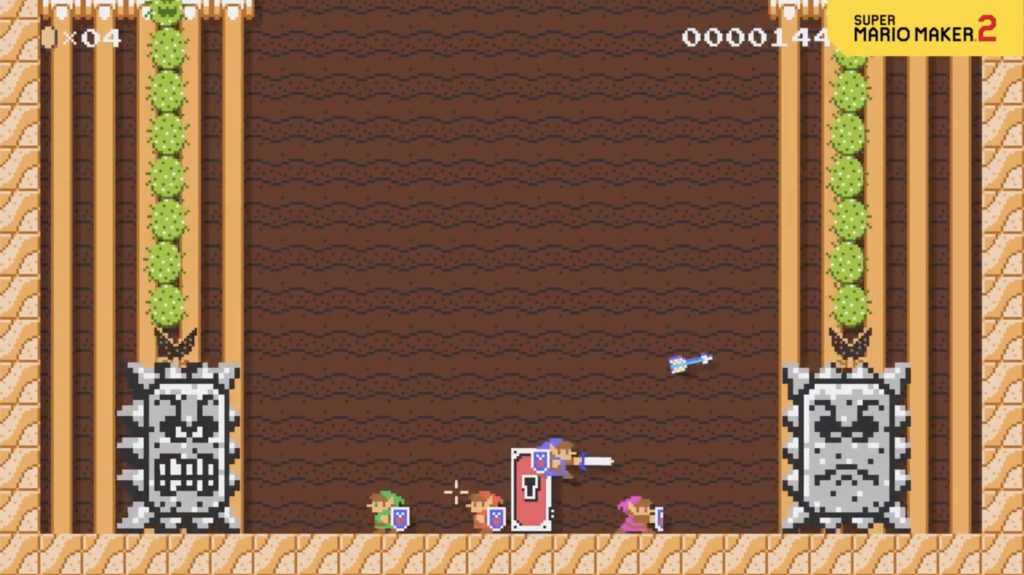 Oh no. Many of Link’s items and abilities from the original Legend of Zelda come for the ride too. So when you pick up the item, you’re then able to shoot arrows, throw bombs, or use the sword and shield too. This hugely changes the way the game plays, and turns a traditional Mario platforming experience into a full blown puzzle/action adventure one, since now he can shoot projectiles across the screen or take on enemies with more than just jumps and fireballs.

It’s absolutely insane really, and makes us think that the Mystery Mushrooms were scrapped not because they were awkward to code in, but because Nintendo wanted to let us play as the actual characters/with their actual abilities rather than just a few minor skin swaps. If so, yeah it’s the right decision we say. Bring on Samus or Yoshi or DK or even Mega Man or Sonic!

Regardless of the motives though, it’s a great addition to the game, and one that’s sure to make for many, many more fantastic levels in the future.

So yeah, that’s what’s coming in Super Mario Maker 2 version 2.0 when it launches on December 5th.

But what are your thoughts about the additions here? Are you happy to see new enemies, items and even player mechanics added to the game?