Back when Pokemon Sword and Shield were announced, Nintendo also mentioned a service called Pokemon HOME. Designed to replace Pokemon Bank, the service was apparently the new way of moving Pokemon between various games, as well as the way to access the (now cut) National Pokedex feature.

However, they didn’t say much beyond that. There was no pricing info, no real launch date, hell not even a feature list. People were going in blind, and it was causing quite a bit of confusion.

But that’s now been cleared up. Why? Because earlier today, the official site for Pokemon HOME finally launched, complete with tons of information on the service and everything included in it.

So in this article, we’ll look at all of it. From how much it costs to when it launches, from app versions to included features.

Which in short, can all be answered with ‘it depends’, February 2020 and ‘quite a few things respectively’. Since Pokemon HOME actually has a two tier pricing structure.

There’s the basic version, and that one’s free. It lets you store up to 30 Pokemon (a truly astounding number we know), allows you to use the GTS and room trades feature, and obviously lets you transfer Pokemon to Sword and Shield.

Then there’s the premium one, and that one gives you a few more functions. The stored Pokemon count is upped to 6000, you can transfer Pokemon from Pokemon Bank to HOME, more Pokemon can be sent via the GTS and Miracle Box features, you can host (rather than just participate in) Room Trades and a judge feature is included to tell you how good your Pokemon are. This version retails at $2.99 a month, with 3 month and 12 month plans going for $4.99 and $15.99 respectively.

Of course, like with many things related to Pokemon Sword and Shield, the pricing has certainly not pleased many people. For instance, while transferring Pokemon is free overall, transferring them from Bank (which was used with the older games) is not. Hence if you want to bring Pokemon from Sun/Moon/the Virtual Console titles on 3DS, you need a premium plan. 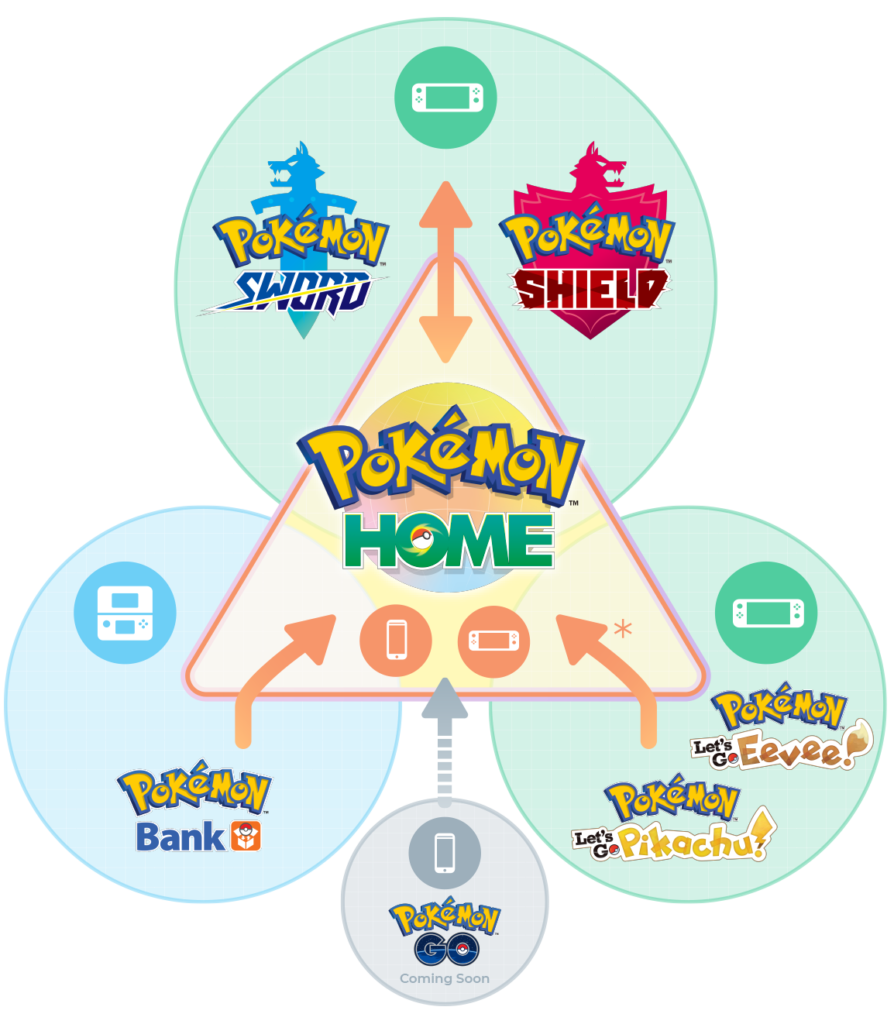 A chart showing which games are compatible with HOME. Bank (in the left corner) requires a premium subscription

That’s… not exactly gone down well with many people. Being able to use it with Let’s Go Pikachu/Eevee and Sword/Shield for free is nice, but its the transfers from older generations that’s the main attraction, and to gate that off is a move that’s sure to annoy many people.

There is one small mercy here however. Basically, for the first month after release, the ability to transfer Pokemon from Bank to HOME will be a free feature, so people needing to transfer older Pokemon do have the option to at first. So all those kids without credit cards/people unable or unwilling to pay for the feature do have the option to make use of it, at least at first.

It’s just a very limited timeframe in which they can do so, and one which is sure to bring chaos as millions of players rush to transfer over older Pokemon before the trial expires.

Still, the feature list itself is somewhat more extensive than you might be expecting. For instance, trading Pokemon can now be done entirely within Pokemon HOME, including via the mobile app if you don’t have access to a Nintendo Switch. That’s pretty nifty, and sure to help people who travel a lot. 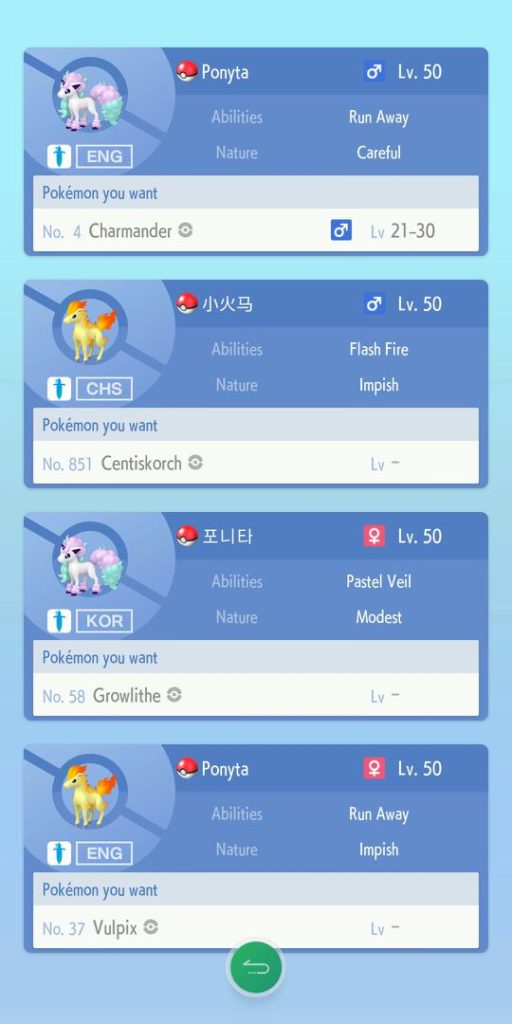 The GTS is available in HOME, and lets you transfer Pokemon with players across the world from a smartphone

And the presence of a judge feature is a nice to see addition too. Like in Pokemon GO, this judges the EVs and IVs of your Pokemon, letting you know whether they’re top of their class in terms of battle effectiveness. Nothing that’s unavailable outside of the games itself, but a nice to see extra regardless, especially given how thorough it seems to be here.

Which in turn is continued through the National Pokedex feature. Not only does this list every collected Pokemon and form in an easy to browse format (including Mega Evolutions, Gigantamax forms, etc), but it also lets you see every ability a Pokemon can possibly have and every move it can learn too. Like a fancier version of serebii.net’s database. Or something along those lines. 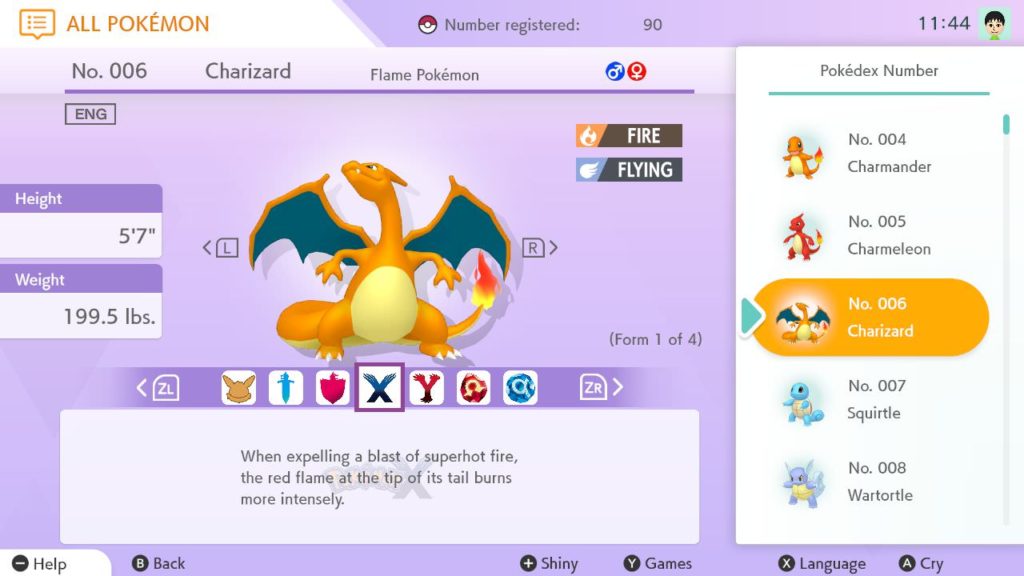 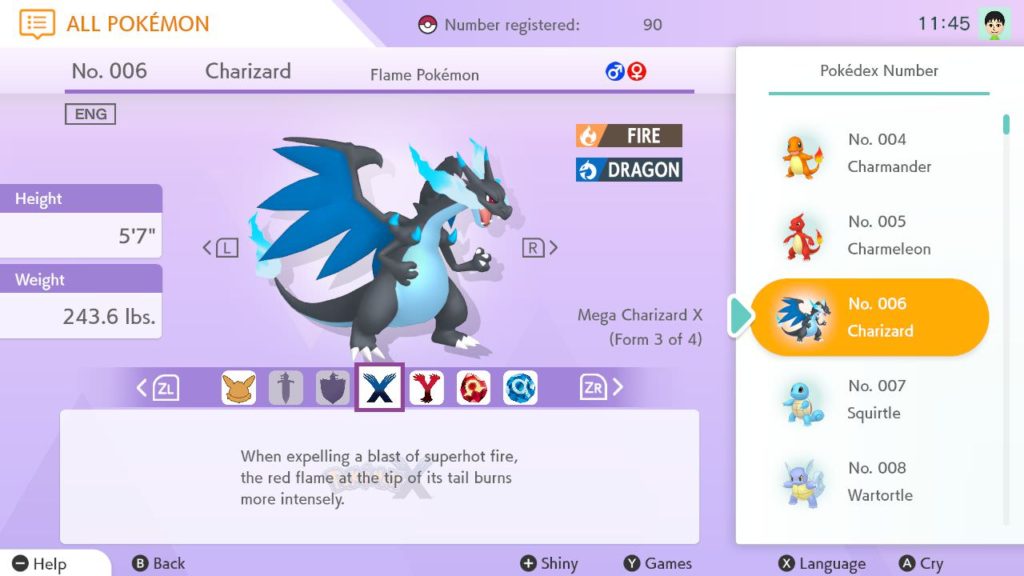 A picture showing Mega Charizard X’s entry. All Mega Evolutions have entries in HOME too 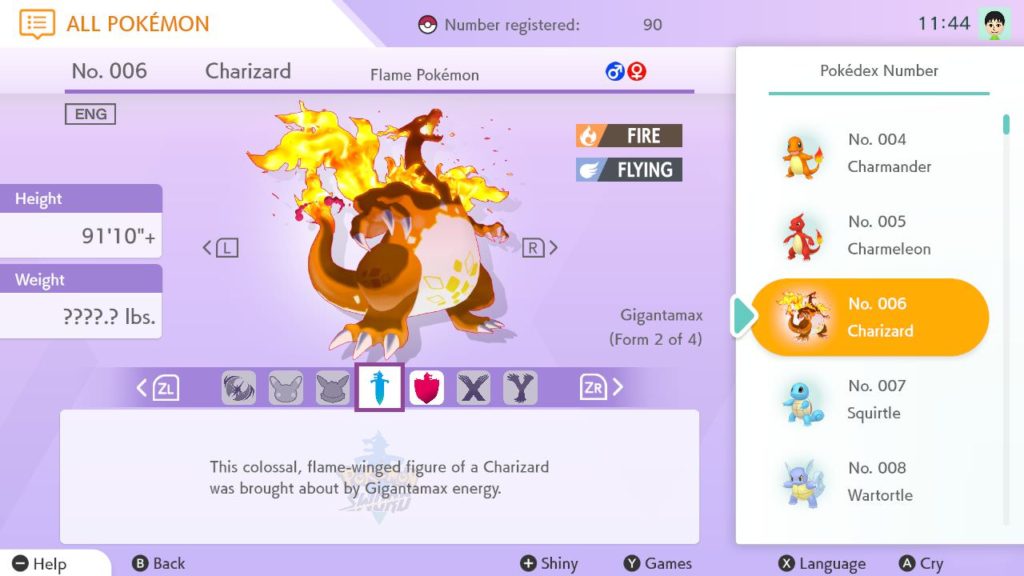 Gigantamax forms also have entries in the dex, as shown here with Gigantamax Charizard’s one 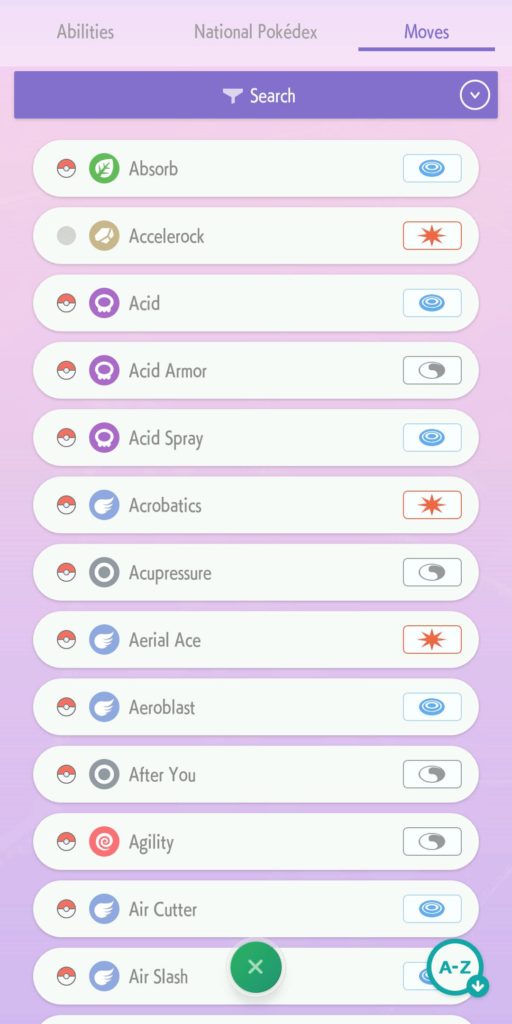 Finally, there are also stickers you can customise your ‘room’ with, the ability to look up how Pokemon Sword/Shield’s ranked battles are going (on the mobile app version) and the ability to get Mystery Gifts through HOME too. So it’s a pretty feature packed app overall, albeit one that may not really be worth the pricing charged for it. 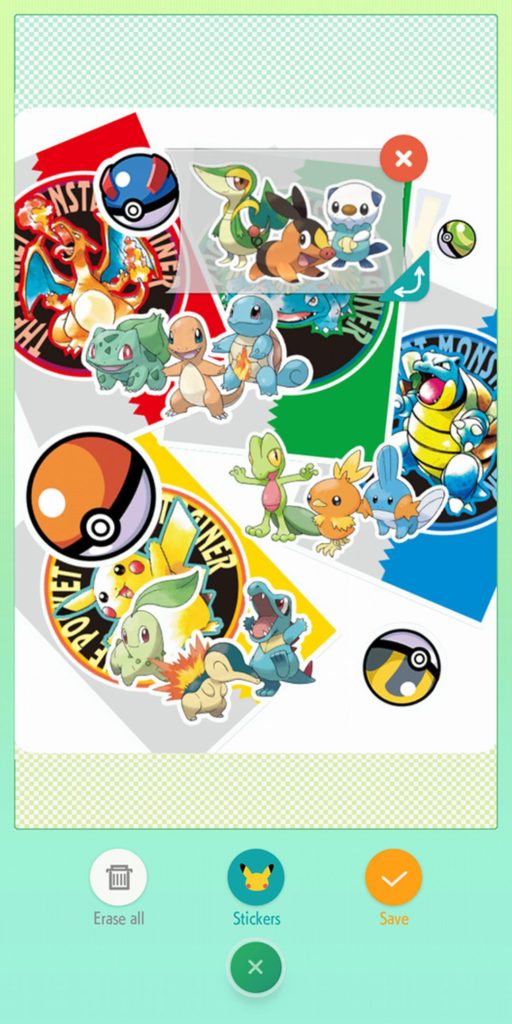 You can collect stickers in Pokemon HOME

Either way, that’s Pokemon HOME in a nutshell. So what do you think of it? Is the premium plan worth paying for? Should transfers from Pokemon Bank really require it at all?

Tell us your thoughts in the comments below, or on the Gaming Latest forums today.

How does transferring Pokemon work in Pokemon HOME?

It depends on the game in question. Pokemon from Sword and Shield can be transferred to and from Pokemon HOME, since they’re the latest games in the series.

But the other games are a one way trip from said game to HOME. So if you transfer a Pokemon from Let’s Go Eevee/Pikachu, Pokemon Bank or (in future) Pokemon GO, you won’t be able to bring them back to said game ever again.

According to the official site, not from the get go. But it will get support for Pokemon HOME at a later date, so you will eventually be able to transfer Pokemon from it to Home and Sword/Shield.

Is the transfer feature free?

For Pokemon Let’s Go Pikachu and Let’s Go Eevee to HOME, and for Pokemon Sword/Shield to and from HOME.

However, Pokemon Bank transfers require the premium plan, at least after the first month. No idea about how Pokemon GO will factor into things here.

It’s a trade feature also found in the main series, where you can trade Pokemon ‘at random’, with no way to see what you’ll get in return until the trade goes through.

What about the GTS?

How about a Room Trade?

This one is basically like a friend room in a normal online multiplayer game, except for wonder trades. Up to 20 players can take part in a room, and they can trade Pokemon with others in said room. However, like in a normal Wonder Trade, they won’t know what Pokemon they’ll receive in return for their trade until it’s complete.

What’s this about features not available to under 16s?

Apparently some features (like adding friends to trade Pokemon with) will not be available for users under the age of 16.

Which raises the obvious question of how exactly the Pokemon Company plans to enforce this, and who in their right mind would actually say they’re under 16 when creating an account.

The Pokemon limits seem a bit stingy for free users, don’t they?

Yeah they do. Presumably the creators really, really want to encourage people to pay for a subscription.

May be a tad exploitative in how its set up to be honest.

What about Home Points and how do they work?

Pokemon Home Points are points you get for depositing Pokemon into Pokemon Bank. These can then be changed into BP (Battle Points) for the main series games.

Which is pretty useful given the typical way to get BP is via the Battle Tree/Tower/other such facilities, and they’re usually pretty damn challenging in most games.

What’s this about an app?

Oh, the software has two versions; one for the Switch, and one for smartphones. The Switch version lets you move Pokemon from the Switch games and Pokemon Bank, while the smartphone one only lets you move Pokemon from the latter. Mystery gifts, trades, battle data and news are only in the smartphone version, whereas the ability to exchange Pokemon Home Points for BP is a Switch version exclusive and the judge feature is in both.

Seems kind of arbitary doesn’t it?

Yeah, it really does. There’s no reason many of these features couldn’t be in both versions.

So is it worth the money?

Honestly, that’s up to you. Personally we’re a bit skeptical of the value here, and do feel it seems a bit unfair. But everyone is different, and some people will get a lot of value out of this.