Over the last few months, we’ve seen some crazy glitches found in Zelda games. From The Wind Waker’s fabled Barrier Skip to Reverse Bitwarp in Skyward Sword and Moon Jump in Breath of the Wild, it’s been a non stop calvalcade of glitch insanity, as speedgame after speedgame falls to more and more insane tricks.

And each and every time, it just made us wonder:

How much more crazy could things get? How could anything possibly top the ridiculous discoveries found so far? Is there even anything left to find in Breath of the Wild (or any other Zelda game) at this point?

Well as it turns out, yes there is. Because right on the tail of the insane moon jump and Prince Sidon anywhere glitches comes a new glitch that puts all of them to shame. One which takes everything you know about Breath of the Wild and tosses it clean out the window.

Then takes said ‘everything’, shoots it a few thousand times with a Guardian laser beam and annihilates it as thoroughly as a Cuccoo thrown into the summit of Death Mountain.

This glitch is called wrong warping. Or more precisely, Moon Jump Wrong Warping, since it uses the moon jump glitch to let you go anywhere in the game you like at will.

Well it’s surprisingly simple, and all comes down to the fact the game can’t handle your position when you warp to a Travel Medallion with moon jump active.

There are two methods for setting it up.

First, the ‘same save’ method. This is the basic version, and lets you warp to the co-ordinates of your Travel Medallion whenever you void out, map choice be damned.

This will royally screw up your respawn position, and make it so whenever you void out, you immediately end up where your Travel Medallion was placed.

And this works anywhere in the game, on any map. Fell of a cliff/into lava in a shrine?

You’ll appear where your Medallion’s co-ordinates are in the shrine map, which is often about 3000 miles out of bounds. 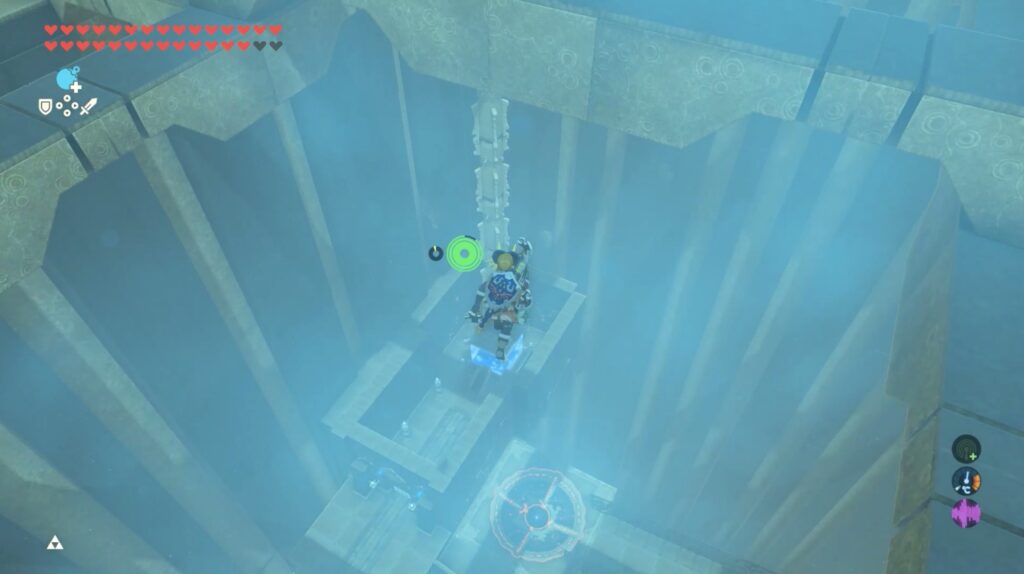 Same goes with Divine Beasts or the Final Trial. Void out in one, and you appear where your Medallion would be placed, which is usually far out of bounds.

It works with everything, from mini games to boss battles to the Trial of the Sword, and lets you get wherever you want on said map by merely falling off a cliff/drowning/falling into lava. It’s pretty crazy really.

And it breaks loads of the game wide open. For starters, if you place your Medallion near 0,0,0, then you’ll appear inside a shrine or Divine Beast when you void out there, letting you skip any puzzle or challenge in the dungeon. Meanwhile if you place it somewhere in North Hebra and void out in the Trial of the Sword, you’ll appear in another room or area where you respawn, which can be a quick way to the final boss of the trial. Same goes with the Final Trial (DLC bonus dungeon), where a well placed warp point will drop you straight on top of Maz Koshia and let you immediately skip to the battle without having to do any of the dungeon itself.

It’s pretty ridiculous really, and that’s even without all the wacky things you can do by escaping a boss battle/sidequest/mini game midway through. 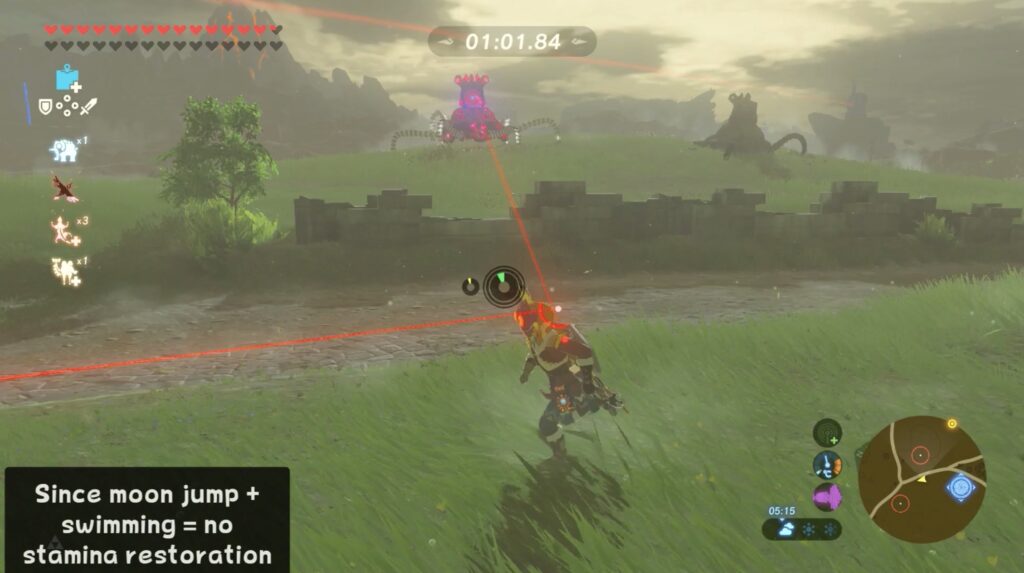 Yet even with all that, things can still get weirder. Yep, that’s because while method 1 is broken enough on its own, method 2 takes it to a whole new level.

Which may well be literal in this case. Since while the previous version only let you travel on maps you have access to, the alternate version instead lets you warp into any area on any map in the game regardless of whether you should have access to said area at this point.

Here’s how you can pull it off:

Voila. You are now in the place you saved before.

And this is true regardless of the map you were on, or the point in the game you’re actually at. Saved in a shrine the other file hasn’t unlocked/found? Well, you’ll be in said shrine regardless, and be able to clear it without bothering with any related shrine quests or story sequences. 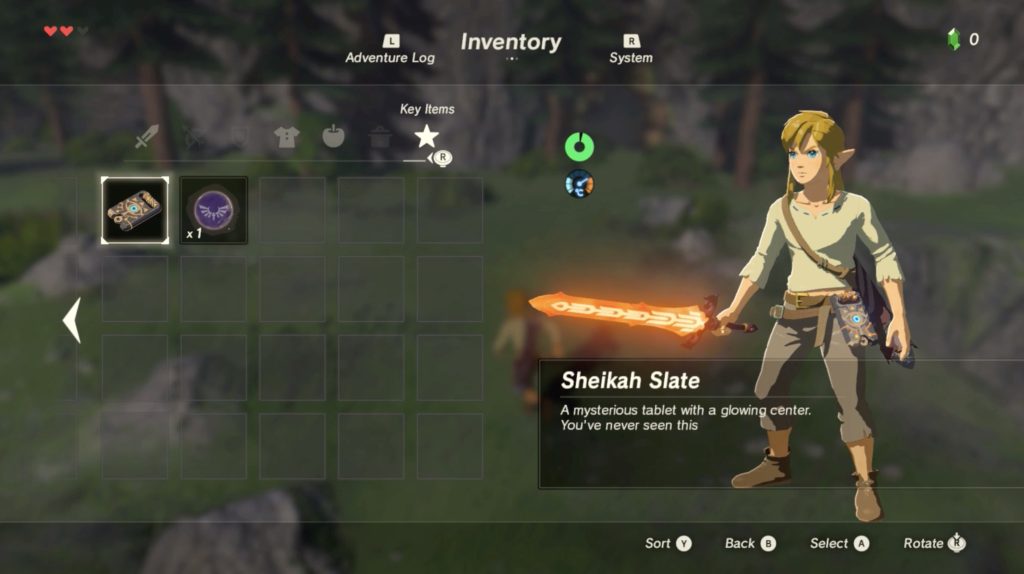 In a Divine Beast? Same goes, you’ll appear in the Divine Beast. Doesn’t matter if you’re already cleared it, if you’re still on the Plateau without the glider or whether you’ve not even started the relevant quest. You appear there regardless, and can do things like clear Vah Ruta without ever having met Prince Sidon.

The insanity just goes on and on and on. Want to skip all the game’s runes? Go ahead, the game only checks for four Spirit Orbs before giving you the glider. It doesn’t check which four Spirit Orbs you’ve collected.

Hence a no Sheikah Slate, no runes, no armour, wooden mop and pot lid only run is now entirely within the realm of possibility. Hell, so is a run with all of those conditions plus the Master Cycle Zero as your ‘horse’ straight off the Great Plateau. Or a run where you complete the Champion’s Ballad without ever having entered a single Divine Beast dungeon or saved a single town. The list of possibilities just never ends, and provides more than enough replay value to keep you going until Breath of the Wild 2 comes out. 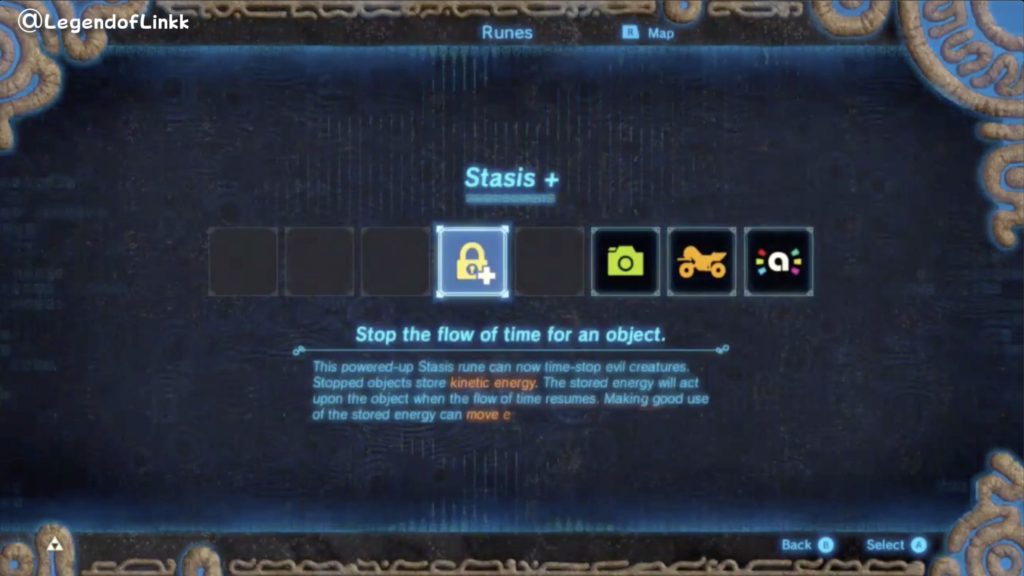 You can have a file with Stasis +, Bombs, the Master Cycle Zero and Amiibo as your only runes

You can even get to places you were never meant to go, like Death Mountain while Vah Rudania is stomping around. Hell, you can even do things like land on said Divine Beast! 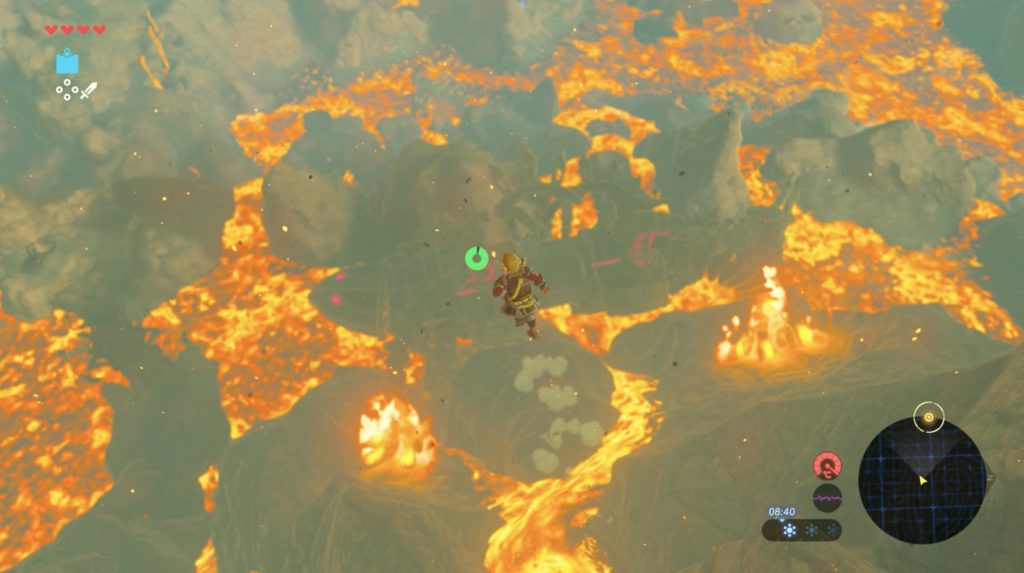 Though if you go near it, keep in mind it’s so hot you’ll catch on fire even with Flamebreaker armour

So check out our lengthy tutorials on both forms of the moon jump glitch here and here: 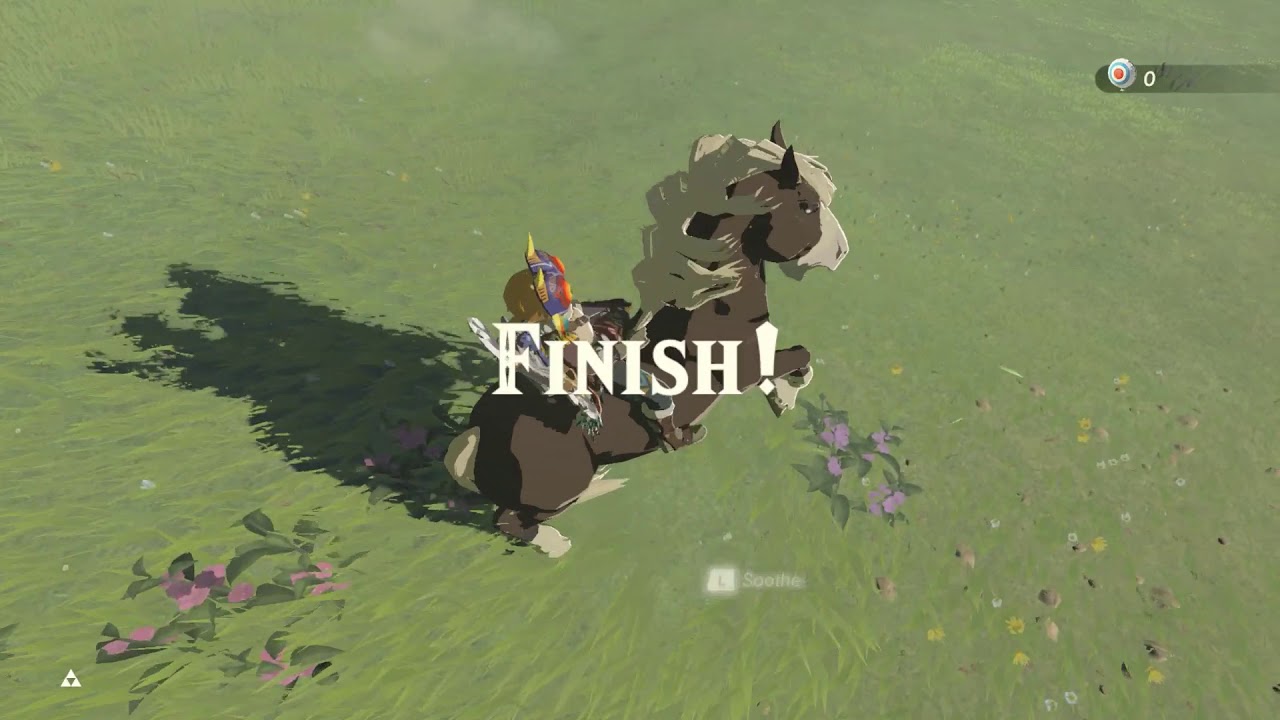 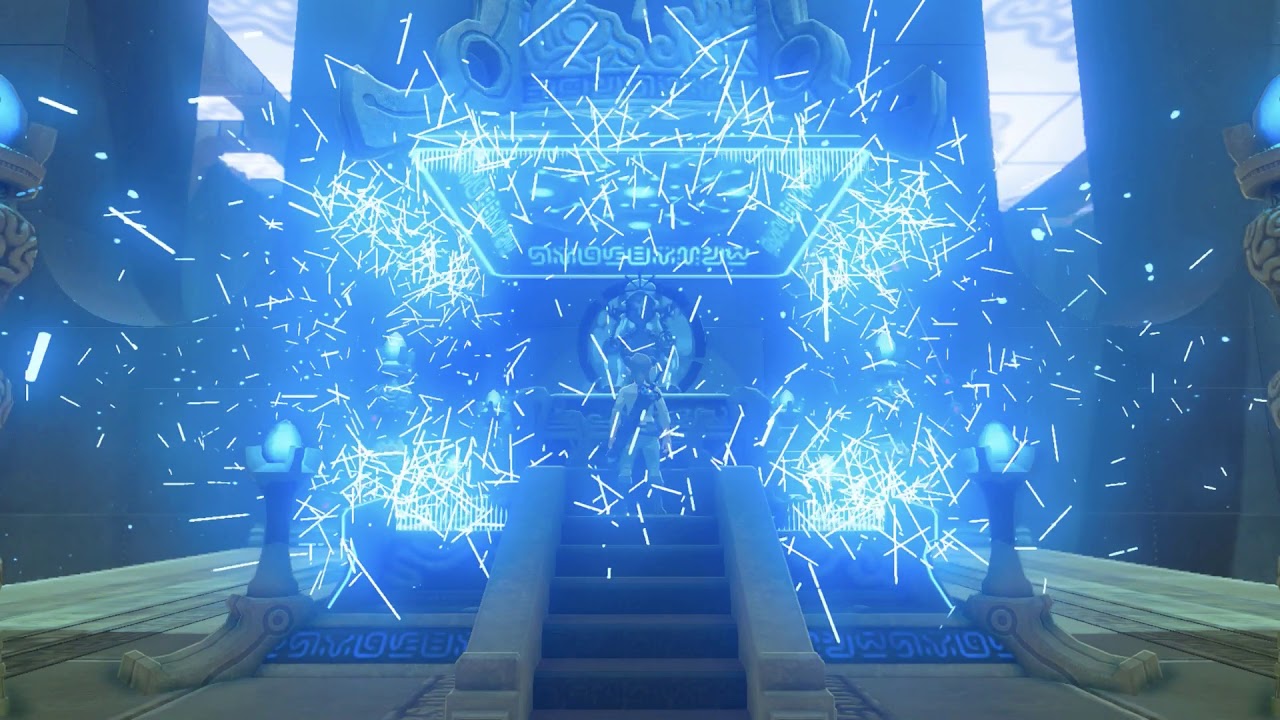 (versions with voice over commentary will be added soon)

Then tell us what interesting things you discover when using them in the comments below. Does skipping all the game’s runes actually change anything? Can you land on top of a Divine Beast before the mission ever begins?

How many Major Test of Strength shrines can you beat with just the weapons found on the Great Plateau?

Tell us what you find in your game breaking today!

Thanks to YuDa, LegendofLink, SilicatYT and the rest of the Breath of the Wild Speedrunning Discord for their help investigating this glitch.