Earlier this week, Paper Mario: The Origami King leaked online. Presumably thanks to either shops selling the game early or a reviewer dumping the ROM for the game online, the ROM ended up available all over the internet, with info about the game being shared left, right and centre as a result.

And this information included a lot more than you’d have imagined. From boss identities to locations, music to villain motivations, all and sundry was made available on the internet, complete with all the heated discussions and commentary you could ever imagine.

So in this artice, we’re gonna looking at all of it, and see just what wonders are in store for anyone who plays Paper Mario: The Origami King!

Since Paper Mario: The Origami King isn’t anywhere near as lighthearted as the ads make it out to be. Oh no, the game is downright horrifying in places, and it’s content verges more on a Mario horror game than Yoshi’s Crafted World.

It’s seriously shocking stuff in places, and the kind that fans would have been downright horrified by had it appeared in any of the earlier Paper Mario games or the Mario & Luigi series. From horrifying deaths to creepy shadow monsters, deranged villains to attempted genocide, the game feels like something out of a creepypasta at times, with all the shock moments you’d expect out of such a thing.

So it’s time to see it all for ourselves! If you’re not ready for spoilers, turn back now!

As expected, there are a variety of bosses in the game. Six are based on stationery and called the Legion of Stationery, 4 are giant elemental gods called Vellumentals, and a few others are just… miscellaneous opponents you encounter on your journey. Let’s look at it. 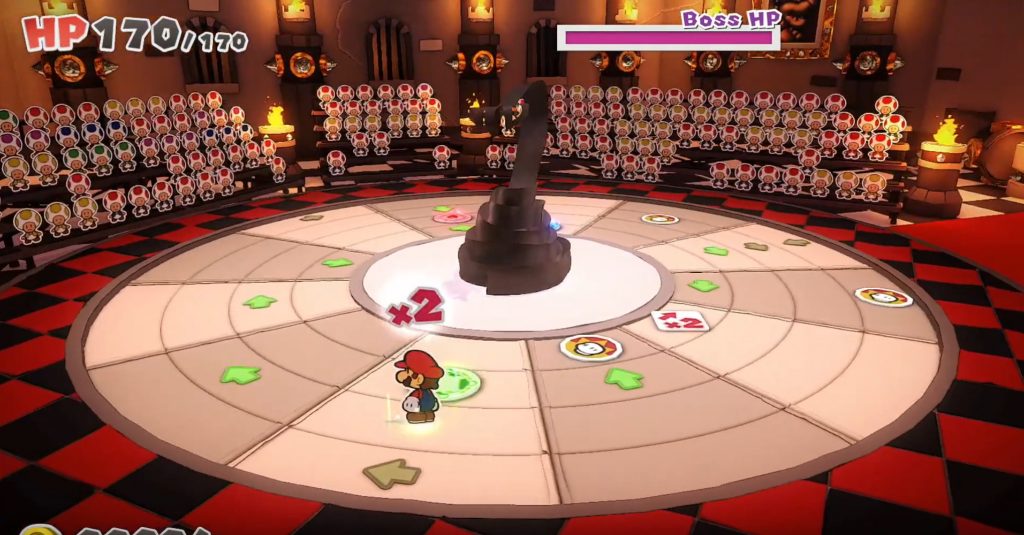 This creature is pure nightmare fuel

While most enemies in this game are returnees from past Mario games, there are a few new ones included nonetheless. Most notably, the two Cutout Soldier enemies. These are shadowy humanoid silhouettes you fight in Bowser’s Castle, which seems to minions of the Handaconda boss mentioned above. 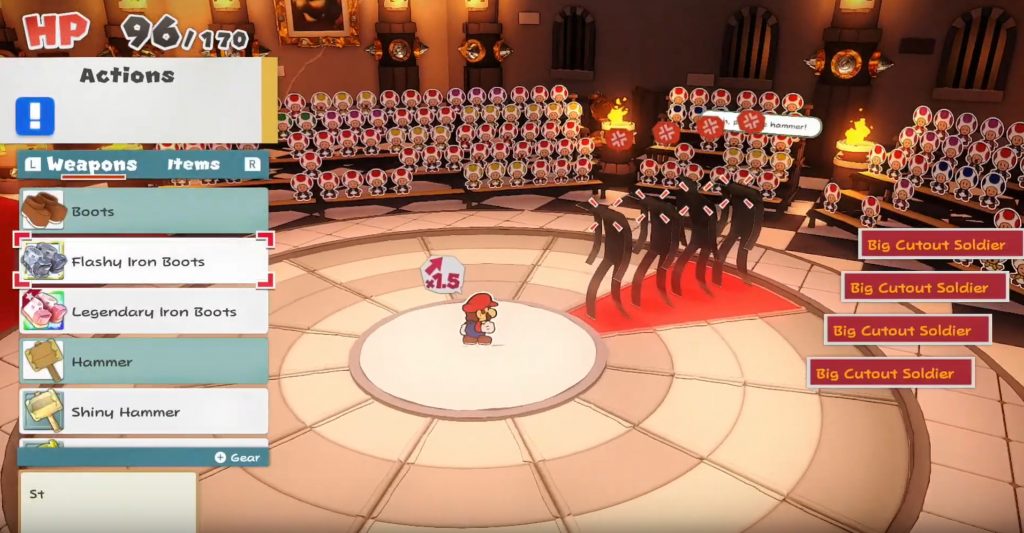 There’s not much to say about them attack pattern wise, but they’re an interesting inclusion, and one which reminds us of the days when new enemy species were a regular thing in the Paper Mario series.

Regardless, let’s talk partners now. As shown in various previews and trailers for the game, Mario gets help from different partner characters throughout the game, which follow him around and help in battle. Here’s a list of them:

You also join forces with Luigi, but only in Toad Town and Peach’s Castle, and he never gets into a battle as far as I know.

However, these partners will generally not join you in boss battles (either due to cowardice or being ‘indisposed’ due to the actions of said boss), nor will they leave the main area they’re found in. If you do leave, they’ll wait at the entrance/whatever pipe you use as a shortcut until you return.

Meanwhile, here are all the interesting items from the game.

Note that all of these except your standard boots and hammer have durability, and will break when used too much.

These are equippable, not used in individual battles. Regardless, here’s the list:

We also have a list of all the game’s locations. Brace yourselves people, this is going to be quite a long one…

(Thanks to MondoMega from ResetEra for compiling it)

No enemies, bosses or similar mechanics in this prologue. Just a trek to Peach’s Castle, then various scenes with Origami Peach and King Olly. 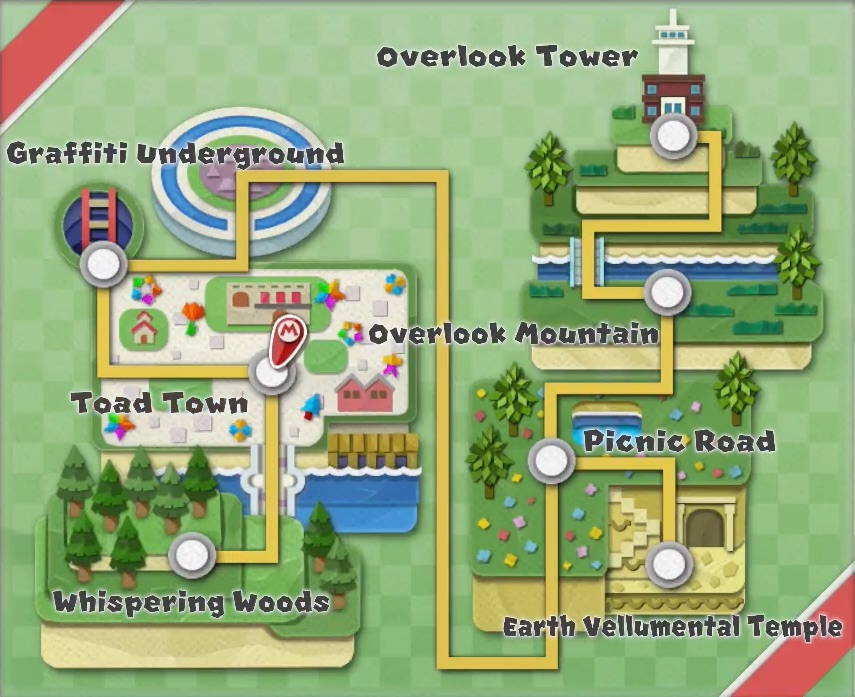 Coloured Pencils is the boss, with the Earth Vellumental as a mini boss. A Paper Macho Goomba is also fought early on. 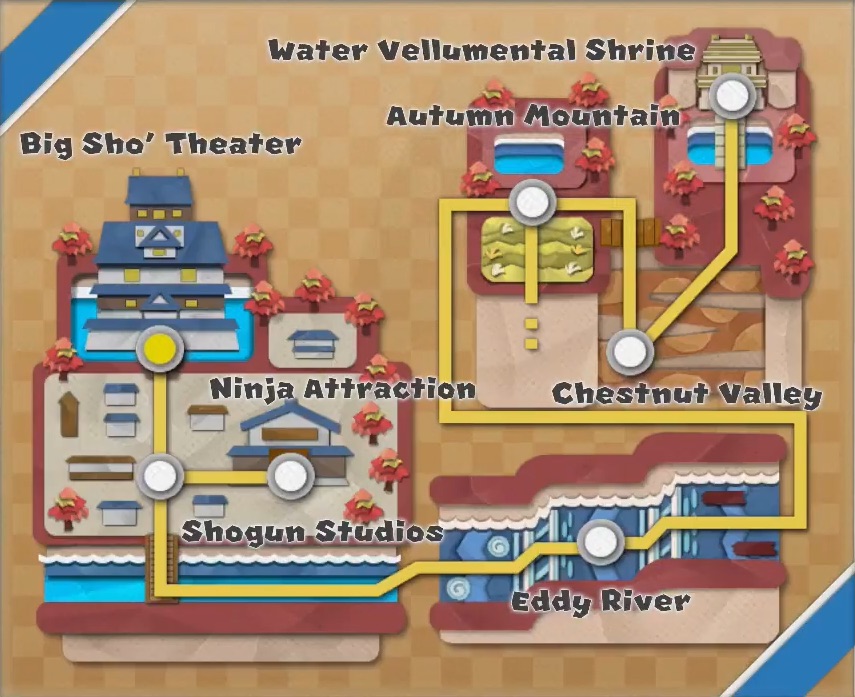 Rubber Band is the boss here, and the Water Vellumental is a mini boss. 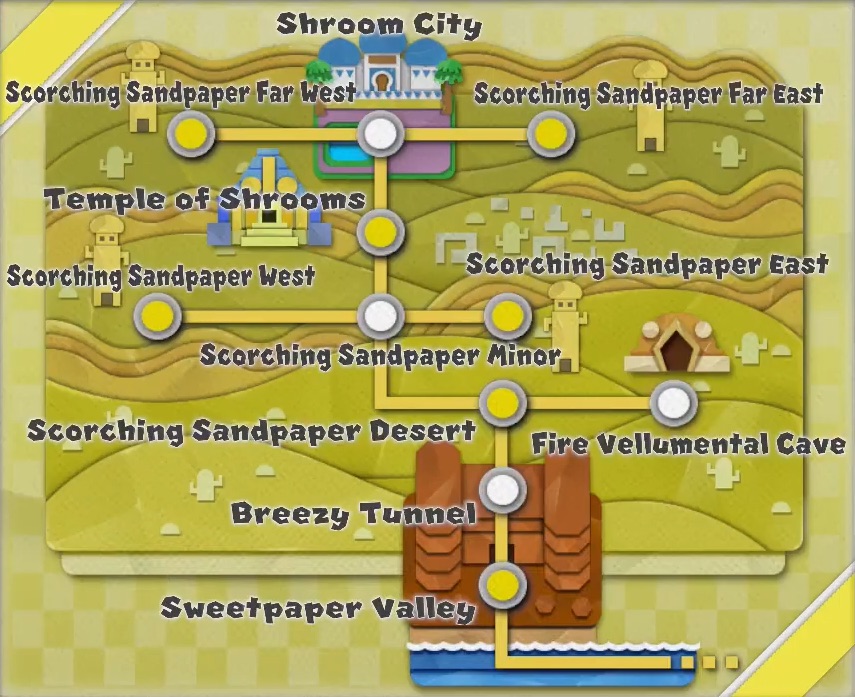 Hole Punch is the boss here, fought in the Temple of Shrooms. A Paper Macho Pokey is a mini boss, as is the Fire Vellumental. 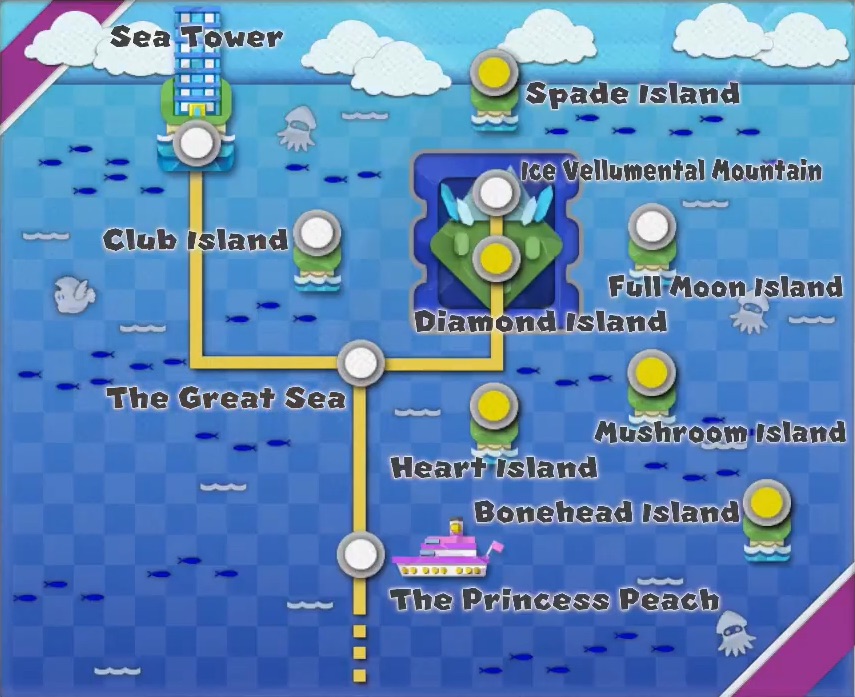 The boss here is Tape, and you encounter Paper Macho Gooper Blooper and the Ice Vellumental as mini bosses.