Before we begin, here’s a quick warning. The content below will spoil a large part of Hyrule Warriors: Age of Calamity. If you don’t fancy seeing things like what characters appear in it, what enemies you’ll fight and what other content there is to see there, please stop reading now and go somewhere else.

Otherwise you have no one but yourself to blame if things go wrong.

Thanks for reading, and now let’s get on with the article!

When it comes to Nintendo games, it’s almost a tradition to see them leaked online at this point. It happened to the Legend of Zelda Breath of the Wild and Super Mario Odyssey back in 2017. It happened to Pokemon Sword and Shield, Luigi’s Mansion 3 and Paper Mario: The Origami King in the years since.

And now it seems it’s happened again with Hyrule Warriors: Age of Calamity, which has apparently been leaked online with dozens of interesting details datamined and posted to the internet. These include icons for all the playable characters, details on enemies and bosses you’ll be fighting i your question, and hundreds more details you may not know about this amazing looking game.

So as per usual on Gaming Reinvented, we’re gonna look at all of them. You ready? Let’s do this!

Starting with the playable characters. We already covered most of these in a previous article where we showed some map icons included in the demo, featuring faces like Sidon and Riju back in the era of the Great Calamity.

But now the full game’s leaked online, we can now indeed confirm that said datamine was real. In fact, we now have a full list of character select icons for said characters too, featuring all these familiar faces in much better detail: 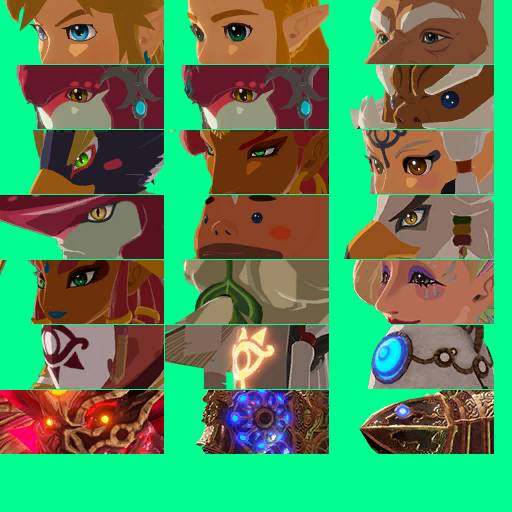 The character select icons for playable characters in Age of Calamity

As you can see, you’ve got (from top left to bottom right):

This pretty much matches up to the earlier rumours perfectly, and confirms that Rhoam, Hestu, the past Champions, etc will indeed be playable in some form in this game.

It’s also backed up by an even more complete list of all the cutscene icons, found here: 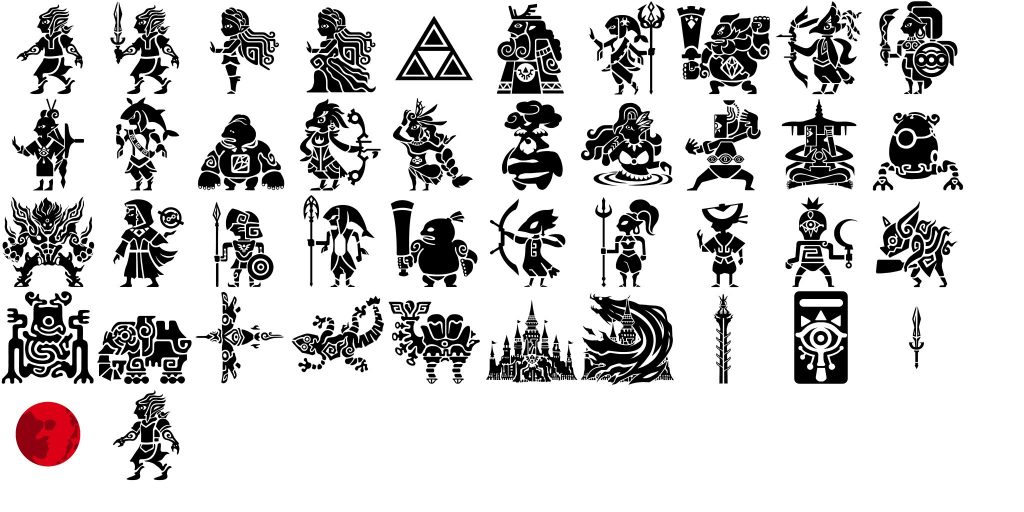 The cutscene icons for various characters

Which features everyone there plus a humanoid Calamity Ganon, that mysterious cloaked villain, Yiga and Bokoblin enemies and a Guardian Stalker.

Interestingly, it also seems Maz Koshia may be in the game as a playable character too, at least if the label for the Monk portrait in the leaks is right. So if you wondered if he fought in the Calamity 100 years… yeah apparently he did.

So it seems we have our roster. Yet the leaks don’t stop there. Oh no, the enemy and boss list is very interesting indeed…

Since according to the leaks, there are some… unusual faces featured here. Like this one:

Is this who we think it is?

Yep, it seems to be a form of Dark or Shadow Link, except made of Malice. Pretty cool actually, and presumably one hell of a boss you face him later on.

We also have evidence the Blights appear in this game too, and are gonna be fought by their respective champions in what is (presumably) a hopeless battle:

This confirms a few things about the timeline. Namely that:

There’s also artwork for a few interesting other antagonists too. Like the new cloaked figure we saw earlier, the evil version of the egg Guardian, and what appears to be a humanoid version of Calamity Ganon. Take a look!

Yeah, it raises more than a few questions about the plot if you ask us. Like, how the hell does Ganon have a humanoid form here? Who is this weird evil fortune teller like dude?

And what in God’s name is going on with the evil Guardian Scout creature here?

Eh, we’ll find out once we’ve bothered to watch all the cutscenes or see a leaked livestream/Let’s Play.

Finally, the music list provides a bit of evidence too, which indicates we’ll be fighting shrine Guardians, Taluses and Master Kohga at some point in the story. If you know, the fact Kohga is clearly a playable character didn’t tip you off enough already…

A full list of weapons got leaked too. Here it is:

All weapon icons from Age of Calamity

It’s kinda hard to see, so again we’ll describe the interesting inclusions as best we can:

First, there seem to be a bunch of different maracas for Hestu to use. This confirms he’s a playable, and implies he’ll upgrade those as his main (and perhaps only) weapon throughout the game.

Secondly, Guardian and Ancient weapons make an appearance in some form too. This not only goes well with Guardian Scouts as enemies, but also confirms that Robbie got Cherry working before/during the Calamity too, since she was able to craft the Ancient Bladesaw a hundred years ago too.

There are also weird helmet and gauntlet type weapons too. Not sure what exactly these are, but given they look like the Golden Gauntlets from OoT, it’s possible at least some attacks involve literally throwing enemies around like pinballs or something.

Finally, with both the Bow of Light and Twilight Bow present and accounted for, it seems like pretty much everything from Breath of the Wild will be usable here, even the endgame and amiibo equipment. That’s pretty exciting if you ask us, especially given stuff like the Sword of the Six Sages and Double Helix Sword appear to be present and accounted for!

As expected, the soundtrack also leaked online. From what we’ve listened to it sounds incredible as expected, but it’s also so poorly labelled we’re not gonna make too many guesses about where certain songs are used in the game itself.

All we’ll say is that if you can find it online, you will be amazed at some of the tracks here. Without a doubt.

As for the story, we won’t give much away. However, what we can say is that time travel seems to be involved with it, since movies show Sidon and Mipha (as adults) in the same area, as well as Teba saving Revali from Windblight Ganon: 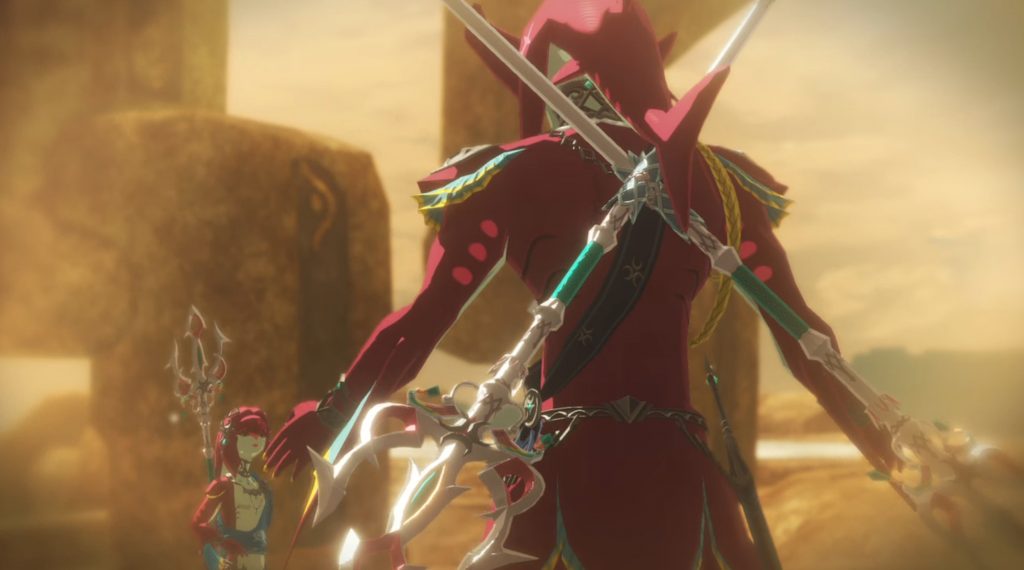 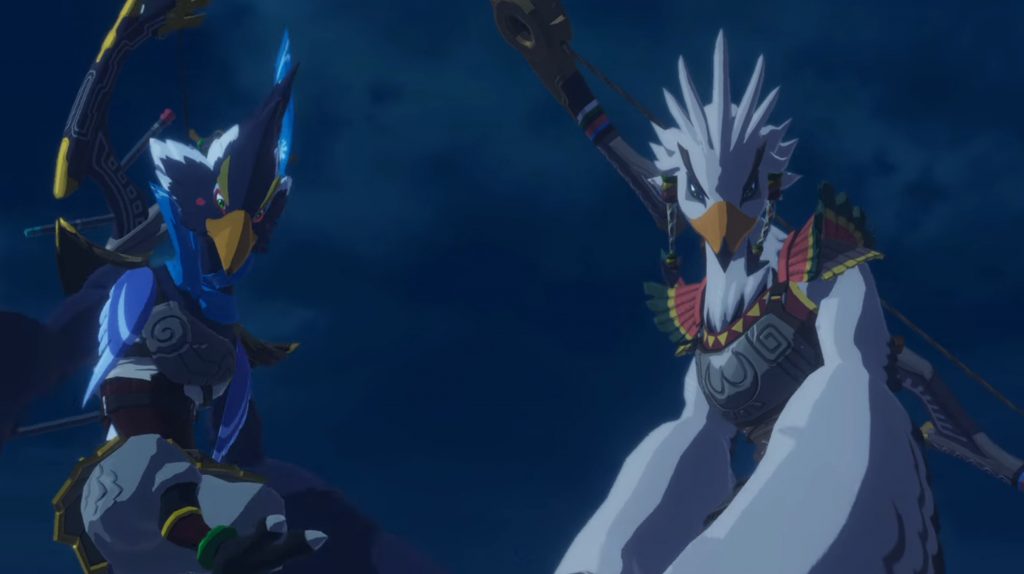 Finally, it seems some preview images for some of the game’s stages have been mined from the game too. These include some stages that are very familiar from the demo, as well as tons from later in the final game. Have a look: 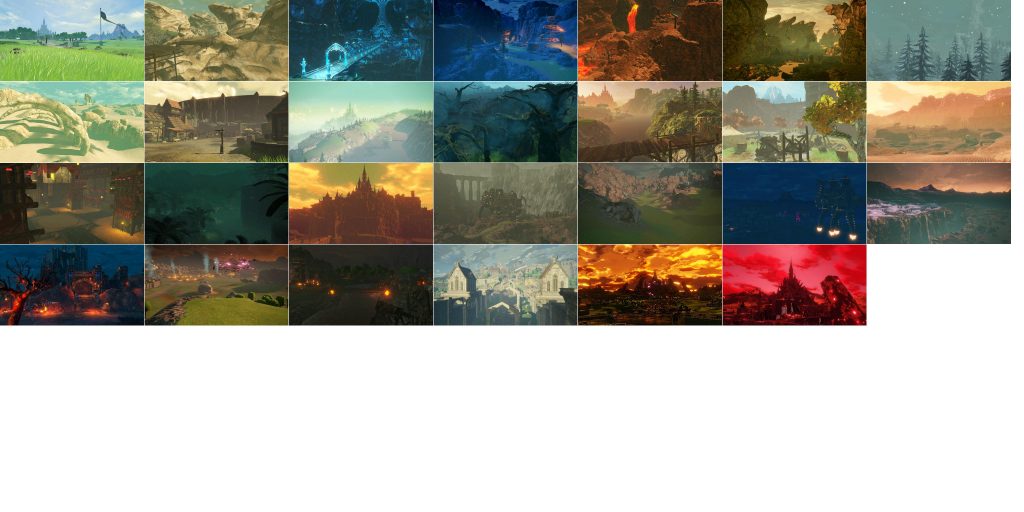 The various icons for Age of Calamity’s stages

Some of the interesting locations shown here include the Yiga Clan Hideout, the Akkala Citadel, the Lost Woods and the ruins of Hyrule Castle Town/Castle among various others. Presumably, the game’s finale goes through the destruction of the Citadel and town, and ends with Link and Zelda’s last stand near Hateno Village (or something similar) based on these pics.

So yeah, there’s a ton of interesting things in these leaks, and it’s well worth checking out the original 4chan thread, or the Age of Calamity subreddit for even more of said leaks in future.

For now though, what do you think about what we’ve seen today? Are you excited about Age of Calamity now you know who’s in it, and how they fight? What areas do you want to fight through in the final game?