For a while now, there has been talk of a Super Mario All Stars type deal for the 3D Mario games. This deal would have remade versions of Super Mario 64, Sunshine and Galaxy on the same cartridge, and would apparently be released as part of the series’ 35th anniversary celebrations, something that’s due to happen very soon.

Yet actual evidence for this event has always been on the flimsy side. Oh sure, reputable gaming journalists have mentioned it, and it’s become a running joke on gaming forums as a whole, but it’s always been stuck as hearsay, with few actual bits of evidence to suggest it’s going to happen.

But that may have just changed. Why? Because a mysterious new Twitter account seemingly related to the event has popped up on Twitter, sparking mass speculation that Nintendo’s getting ready for the big reveal very soon.

As well as a screenshot showing what’s there at the moment: 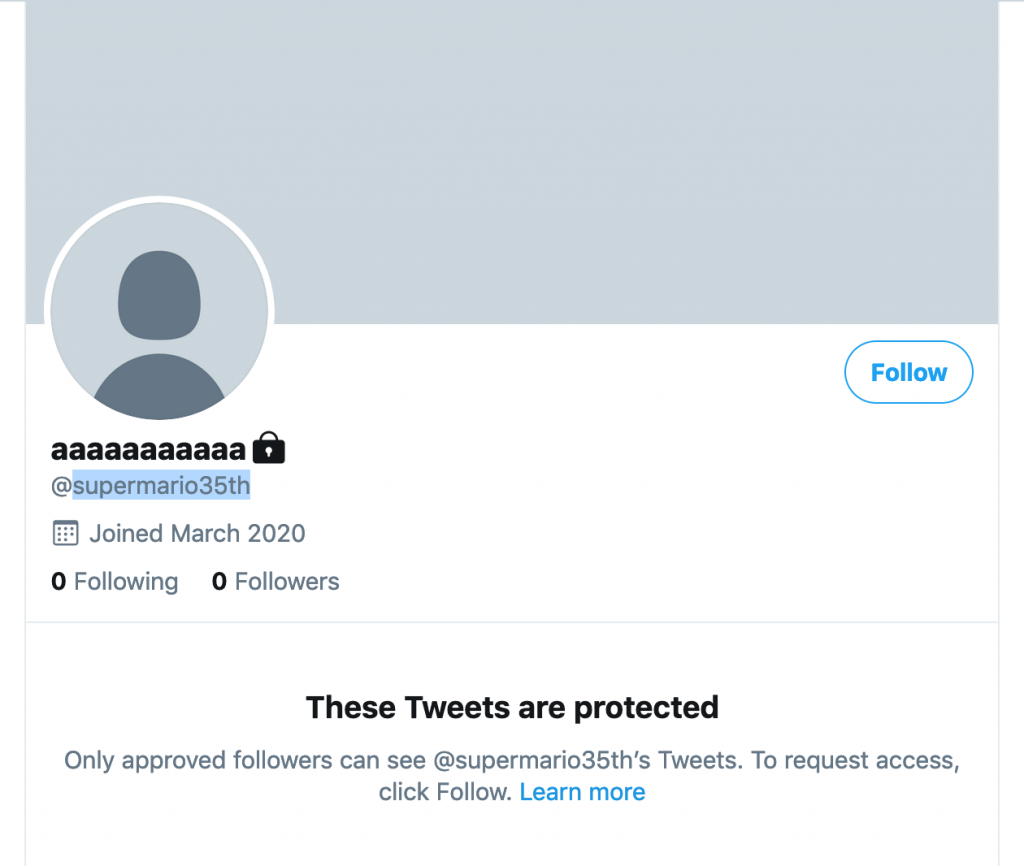 But is it legitimate? Is this really the official Twitter account for the Mario series’ 35th anniversary celebrations?

Well, it’s hard to say for sure.

On the one hand, the email format does indeed match Nintendo’s email format for official accounts, and the banner says ‘coming soon’ in a font/style very close to the one Nintendo Co Ltd (Japan) often uses for such things.

Add this to the timing (35th anniversary merch was already announced for the series, and it’s highly likely that 3D Mario remakes collection is indeed in development), and there’s a decent amount going for this one. In that sense, it’s at least plausible this is real.

Yet we can’t jump the gun too much even then. Why? Because anything here could easily have been faked.

The account name? Anyone could register it. Creating a new Twitter account is a piece of cake, and there’s already been at least one case of fans registering accounts for rumoured games just for the sake of it:

So the same could easily be true here. Any random fan could have set up a Twitter account like this, and no one would be any the wiser.

Additionally, the email isn’t much of a give away either. After all, do you know what happens when you try and reset the account’s password?

You get a partially obfuscated email address as a hint, plus a button to send the forgotten password email.

And this email address is only shown at a very basic level. Like, four characters out of twenty level basic:

This does indeed match a typical Nintendo account format, and can indeed be mapped to Nintendo.co.jp:

But it doesn’t need to be. It can be mapped to any number of Nintendo subdivisions too. Nintendo UK, Nintendo Korea, Nintendo Israel or Nintendo South Africa. All of these divisions have domain names ending with .co.[domain], and all of their email formats could perfectly match the one used for this account.

Plus anyone and their dog could register a similar domain too. After all, has Nintendo really managed to get every top level domain related to their brand? No of course not. So a devious hoaxer could just look up a list of second level domains, find one where ‘Nintendo’ hasn’t been taken yet and use that.

They could also just create a domain name that sounds convincing when obfuscated too. Nintendo.co.jp and Naemondo.co.uk would both likely look the same on Twitter’s reset password page, and with the obfuscation, no one would be none the wiser.

Hell, whose to even say they have access to the email used anyway? Twitter doesn’t need one for new accounts, and I don’t think the reset password page lists the phone number associated with the account either. So a hoaxer could also have created it with a phone number, then added a fake email to the account after creating it.

All these possibilities are true there, so we have to be at least somewhat skeptical about this account.

There’s also the whole name thing too. After all, would a new account like this really be named ‘aaaaaaaaaaa’ til it launches?

Honestly, we’re not sure. Changing the account name on the front end doesn’t do sod all in terms of stopping fan speculation, especially when the handle itself is still set to @supermario35th. A really smart company (like we’re sure Nintendo and their brand monitoring partners both are) would just avoid creating the account until it’s ready to go live instead.

Still, what do you think? Do you think there’s a good possibility this account might be an official one ready to go later?

Or do you think it’s a worked of a bored fan/determined hoaxer?