Here at Gaming Reinvented, we’ve covered a fair few interesting bugs in the Legend of Zelda Breath of the Wild. From the absurdly broken World Reset to the bizarre reality warping Lizalfos Curse to the recent game breaker that’s Hyrule Overload, the game is filled to the brim with insane glitches that can be used to shatter every one of the dev team’s original intentions for the game.

And today, we’ve got another example. One which may indeed break things almost as much as World Reset and Hyrule Overload did, if not more so.

That my friends, is Mini Game Storage. It’s one of the biggest discoveries the speedrunning scene has made in recent times, and when done correctly, one which can have lasting effects all across the entire game.

So how does it work? What is this whole Mini Game Storage thing about anyway?

Well as the name suggests, it’s a bug where you can store the active state of a mini game while outside of said mini game. Or in other words, the game thinks you’re doing the Test of Wood/gambling game/deer hunting, whereas in fact you’re actually all the way over on Eventide Island or fighting Calamity Ganon in the Sanctum.

Which in turn means you can do things like carry loss conditions across the map, and activate them in places you’re really not meant to activate them. Like a side quest you’re normally not allowed to escape, Eventide Island, the final boss battle, the One Hit Obliterator trial, etc.

So let’s get to it. Here’s how the initial setup works:

A Quick Guide in Pictures 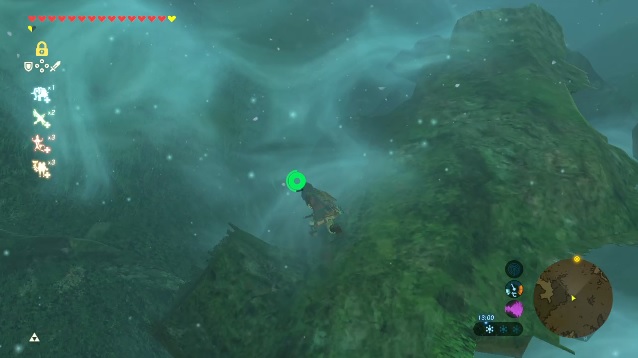 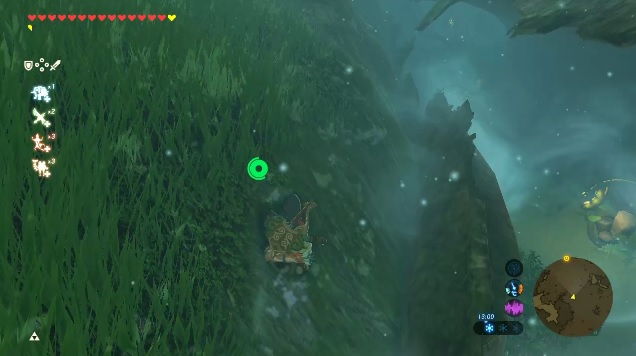 You’ll shield surf down to about here… 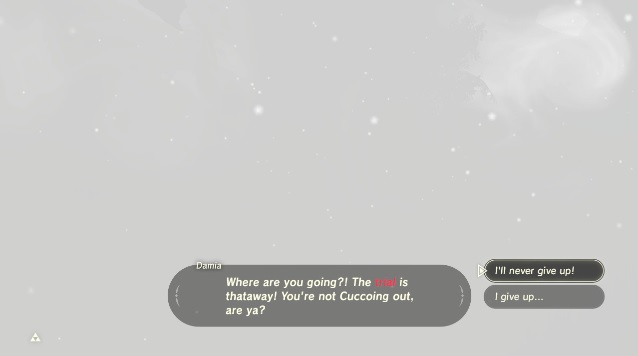 The Korok will ask if you want to leave, while fog fills the screen… 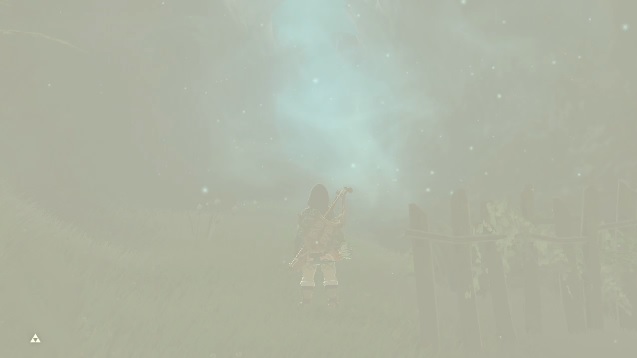 Continue, and you’ll immediately void out, escaping the mini game

But first I may as well give you a warning. You see, when I say void out, I also count the mist effect in the Lost Woods.

And if you’ve activated mini game storage, you can’t teleport any more. At least while it’s active.

So… yeah, sorry, but you’ll need to get out the Lost Woods in reverse without voiding out from the mist/fog everywhere. Have fun with that, though a good fast horse can get you to the torches (and relative safety) before the mist can catch up.

You also may want to do this before you’ve cleared the Test of Wood for the first time. Otherwise, enjoy the five minute time limit.

None the less, now you’re out, what can you do with this?

Well for one thing, you can escape any location in game.

Escaping Any Location in the Game

Namely, by going there, then removing your Forest Dweller gear. You’ll immediately be warped back to Korok Forest, even if you’re in a place you’re not meant to be able to escape from.

These places include the final boss battle phases: 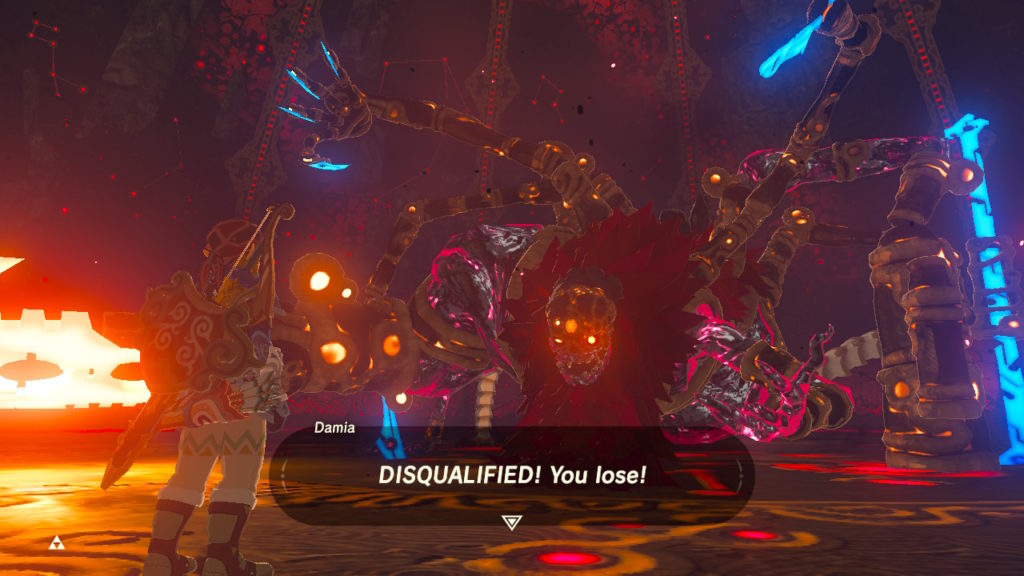 Though you’ll need to not have the Master Sword to escape from Dark Beast Ganon, since Link automatically takes it out to fight Calamity Ganon (and gets kicked out of that phase of the fight instead).

You can also use it to escape from Divine Beast battles. Granted, it’s hard to enter most of these (since you can’t talk to anyone), but if you do, you can immediately leave in the same way. Most notably, you can escape the Yunobo stealth mission like this, which is pretty amusing.

And then there are the side quests you can escape too. Like the one where you confront Dorian about his ex Yiga Clan status, and save him from a Yiga Blademaster sent to punish him for leaving. Again, you can’t usually escape these, but you can do it pretty easily with this bug. 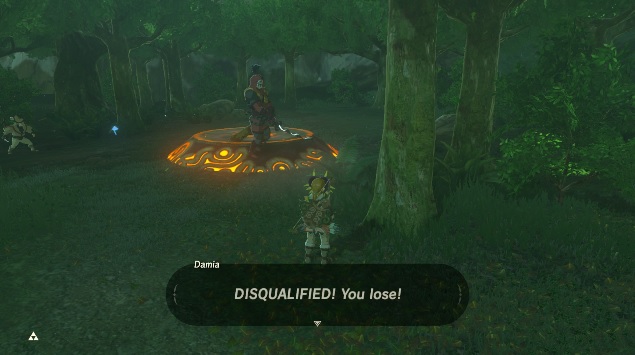 Has this Korok finally joined the Yiga Clan?

Plus many others too. We’ll have to experiment to find all of them.

But hang on guys, you say. What about Eventide Island? Why the hell haven’t you mentioned that location?

Oh, we will. Because Eventide Island is… special, and escaping actually breaks the game in far more ways than ever imaginable.

So let’s look at them!

Basically, how Eventide Island works, is that it takes away your gear, and gives you a temporarily inventory that goes away when you leave/finish the shrine quest.

It also locks down changes to key items too. This means that if you have a certain set of key items before the quest, and lose them in the quest state, you get them back afterwards. Same with items you gain, they’re just gone when you reload.

So if you go to Eventide Island, get warped back to Korok Forest (or anywhere else) via mini game storage and then fail said mini game again, the game will temporarily think you’re in Eventide and the mini game at the same time. Hence you have no items until you load a save, and any changes to key items go away when you load said save.

This means you can do the following interesting things:

This can have some awkward effects. Namely, making your save file unwinnable, since items necessary for certain story path don’t come back. It’s not as bad as in other Zelda games (since hey, fighting the final boss is always an option at any time), but it sucks for those who want the true ending or the likes of Mipha’s Grace/Urbosa’s Fury.

There’s likely more to it too, but the glitch needs to be explored a bit more first.

Keeping the One Hit Obliterator

However, Eventide Island isn’t the only major side area you can exploit with this.

No, you can use it in the One Hit Obliterator quest to do what every Zelda fan has been wanting to do for a while now;

Keep the Obliterator outside of the Great Plateau!

And it’s all pretty simple really. Just escape the Test of Wood, then start the Obliterator quest. You’ll immediately fail due to putting away the Forest Dweller’s Sword for the Obliterator, and get warped straight back to Korok Forest.

Then, you’ll be able to play the Test of Wood again.

But here’s the interesting bit. You see, the game wasn’t programmed to check you were actually holding the Obliterator when you left the Plateau. As a result, it doesn’t actually remove that exact weapon ID from your inventory.

Instead, it removes whatever weapon you are holding at the time. Old Maz Koshia there just assumes you’re not able to swap the Obliterator for something else.

You see where this is going. Koshia ends up nicking the Forest Dweller’s Sword instead of the One Hit Obliterator, leaving you with the Obliterator and swiftly kicking you straight back out the mini game you just started.

Cue Link running around one shotting everything in Hyrule!

Or actually, no. Not really. Unfortunately for us bored ‘destroy everything evil that moves’ types, the Obliterator only maintains the special one hit kill effect on the Great Plateau, meaning that using it outside leaves you with a weapon roughly about as powerful as a tree branch.

Still, at least it’s technically unbreakable, and it makes a nice decoration for your house’s weapon rack in Hateno Village. So go nuts I guess. 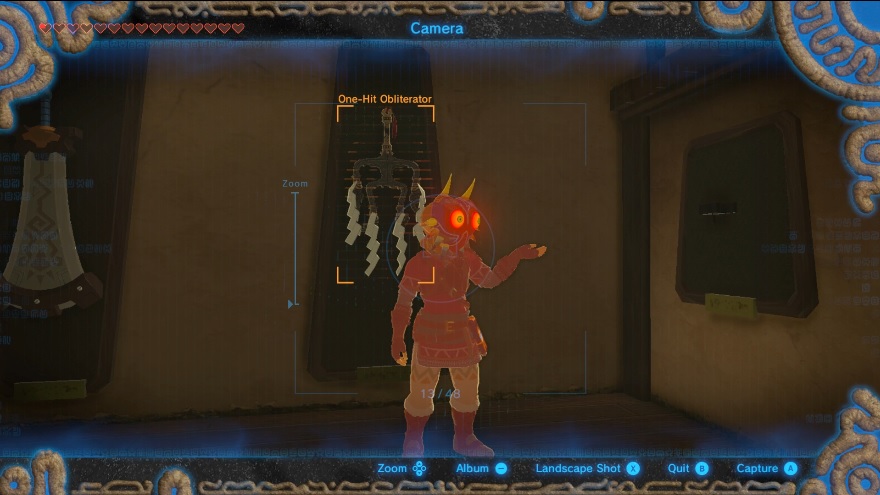 Still, the glitch’s effects don’t end with the One Hit Obliterator, Eventide Island or you cloning/permanently losing important items.

No, there are lots of minor ones too.

For example, if you’ve played the Test of Wood mini game before (or escaped another one with a timer), there will now be a timer on screen everywhere you go. This makes for some amusing visuals, especially in stuff like the final boss battle where the timer keeps going even through cutscenes: 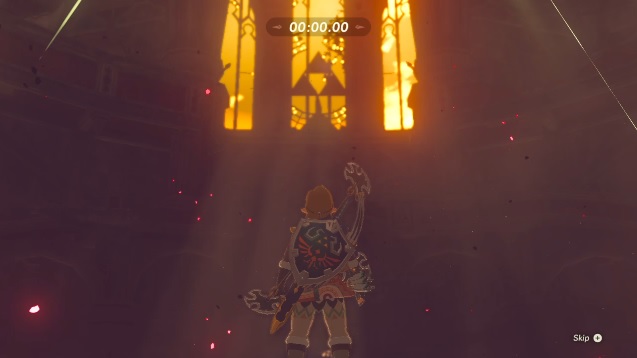 It also makes for some screwy effects on things like boss health bars too. That’s because for whatever reason, these do not appear while Link is a mini game. As a result, bosses like Calamity Ganon and Dark Beast Ganon now won’t have a health bar on screen at all: 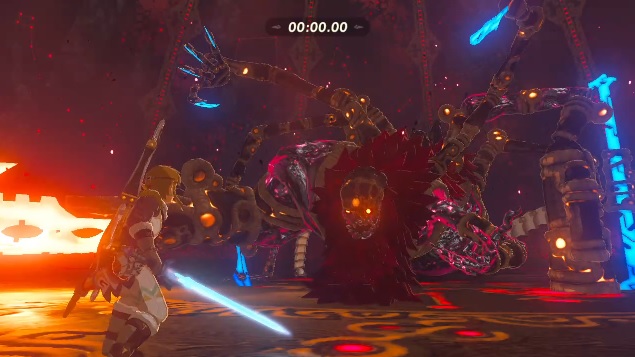 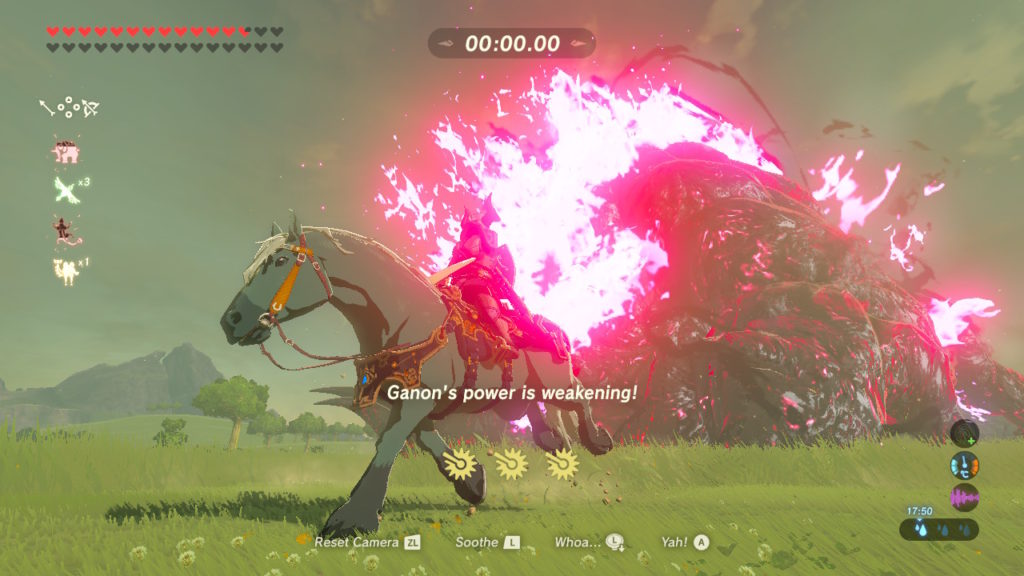 Dark Beast Ganon also has no health bar any more

They’ll still take damage and die (obviously), but this makes it significantly harder to know how close you are to finishing them.

Another effect this glitch causes is that almost all actors you normally interact with via the A button stop working entirely. This means that while Mini Game Storage is active, you cannot:

And that’s not the end of it. Oh no, if you do manage to enter the Trial of the Sword, it turns out you can’t use the exit panels to leave each floor either. So any attempts to clear the trial will end in failure at the first floor, since (out of bounds glitches aside) you have no way to progress after killing the first set of enemies.

But you obviously can’t do that right away, since the Trial of the Sword is typically inaccessible in this state.

So how do you get in?

Well, like with Dark Beast Ganon/final boss escape, playing the gambling mini game will reactivate saving, teleporting and entering things like the Trial of the Sword.

But there’s a catch. Doing so also exits Active Mini Game Storage, since the game clears most of the mini game state in the process.

So it’s a choice between saving and warping, or escaping places like Eventide to clone items or keep the One Hit Obliterator.

That said, it’s not too bad of a trade off in some ways. Why?

Because as it turns out, doing this utterly annihilates the original Test of Wood mini game. As in, it seriously breaks it to hell.

That’s because for whatever reason, this turns off the ability for the Korok to detect when you’re breaking the rules in said mini game. So if you go back there in this state, not only can you save and teleport mid game at will, but you can also switch out the Forest Dweller gear with no penalty at all, since the game doesn’t care to enforce the rules any more.

Yet it still doesn’t end there.

No, unlike many glitches in this game, Mini Game Storage (at least in its ‘passive’ form) can basically be saved to the game/profile. This means that you can activate it, go to Lurelin, enable saving and then stay in said broken state to your heart’s content, since it keeps going even after you reload your save file or reset the game.

It’s pretty neat really, especially as (unlike with the final boss escape bug), resetting this trick is as easy as setting it up. Just go back to the Korok (or whatever NPC you played the mini game with), then quit the game. Voila, everything’s back to normal, and your save file is as good as new. Or as ‘normal’ as it could be with a One Hit Obliterator sitting in your house’s weapon rack, a bunch of free inventory slots you didn’t have to pay Hestu for and various extra key items you never lost in the first place.

So give it a shot if you’re interested. It’s a simple trick to get working, creates all kind of funny scenarios in how much it breaks the game, and if done right, can be used to get a crap ton of neat things the game never intended you to keep.