Not in a satanic or literal sense mind you, but more in a ‘this game is actively trying to sabotage your attempts at winning’ one. Yes, Yoshi’s Island DS is pretty much the nearest thing Nintendo have ever made to a kaizo style ROM hack, and seems to be designed by someone who thinks the best measure of game quality is how much it can predict its players behaviour and make their experience a living hell.

That said, it isn’t a bad game in itself, just an annoying one. The graphics are very well done and mostly match the style of the original (while still updating it to look good on modern systems). And while the music is often rather poor compared to the amazing soundtrack of the original title, it’s most bad in a bland and inoffensive rather than ‘ow my ears are burning in agonising pain’ way.

But it does start to falter a bit in the level and game design in general. For one thing, the difficulty curve is basically non existant. It starts out easy for a world or two, then hits about halfway through world 3 and ends up at roughly Yoshi’s Island 1 endgame level. And past world 5-1? God help any player who even attempts it.

You can see this best in how many insta kill elements get chucked in your face as you progress through the adventure. Whereas in the first game the levels generally went light on the ‘kill Yoshi in one hit’ traps and made somewhat logical looking levels that could still challenge the player, Yoshi’s Island DS just chucks them all over the place. Hell, some levels like Moltz the Very Goonie’s Castle: 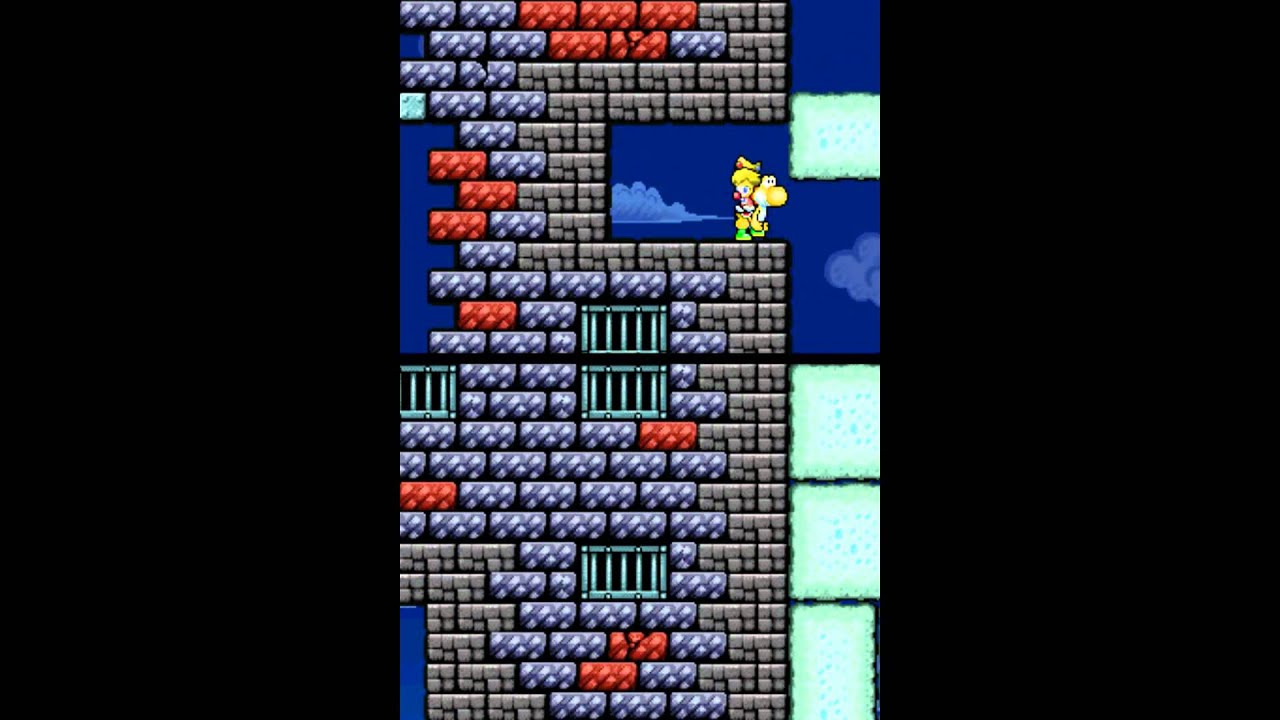 Above: How many spikes did they shove in there?

And Bowser’s Castle itself feel like they’re made of nothing but spikes as a crutch to cover poor level design. That only gets worse in the secret and extra levels where any pretense of the game being legitimately fair go flying out the window.

Take A Light in the Dark for instance. Interesting secret level, but it’s just too long and too difficult to be even remotely fair. You’ve got a huge maze filled with darkness and spikes, then a blind skiing section with lots of precision jumps to make and then even more platforming before the level’s over. Let there be Light? You have to jump off a switch over a spike pit, something which requires literally frame specific precision. And when you see things like the lava trap in another secret level (of the ‘mess up and go back three rooms and try again) kind or the damn near impossible to predict with any accuracy egg platform in Yoshi’s Island Easter Eggs, you realise that the game was blatantly made by someone who didn’t really know what they were doing. 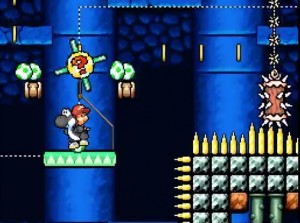 Above: I don’t think anyone even knows how to beat this room without dying at least once. Heck, I don’t think the likes of Professor Layton could figure out the ‘legit’ strategy…

Indeed, that whole room shown above is just so ‘random’ there’s no real way of even judging it. You fire eggs at the platform wheel, it moves. Fire quicker and it moves/accelerates quicker. Hit the wheels above the spike barriers and they move up. But the control scheme is so imprecise and the ways to mess up so easy that nearly every attempt ends in certain failure. Go too slow and you run out of eggs. Go too fast and the platform shoots straight past the barrier and leaves you stuck in an unwinnable situation. It’s not well thought out or designed at all.

And honestly, much of the game is kind of like that. You’ve got areas and bosses like the first few which are too easy to the point they probably weren’t tested well, you’ve got parts of levels where traps you can’t see or predict in advance get sprung on you at random and a general zero acceptance for minor mishaps (no items here, if you run out of points or eggs, you’re literally incapable of getting a good score or sometimes beating the level).

But despite what I said about poor level design, the game is still pretty fun. The platforming is fun, the basic game mechanics work about as well as they did in the original and there are brilliantly unique ideas in here (like the boss fought in freefall), it’s just that the game is just a little too frustrating for most people.

Above: Probably one of the most interesting bosses I’ve seen in a 2D platformer. Maybe Super Mario Galaxy 3 should use a similar concept except in 3D...

The extra modes are pretty good as well. Time Trial is neat to have, although the whole ‘get items to lower your time’ kind of kills the point of it all, the mini games are fairly decent if you like that kind of thing and the enemy museum is actually pretty cool if you want to see how the monsters act without getting hurt in the process.

And there’s one more important piece of advice for you. So listen up! Time keeps on ticking even as you are reading this message!
Above: The Time Trial messages are… funny too.

And while the transformations and things are fairly rare this time around, some of the new stuff involving them is pretty cool. A rocket that takes you up into the stratosphere and has you avoid planets on the way to the next part of the level? That’s pretty unique for a Yoshi game. As is the kangaroo riding and mine cart related gameplay.

All in all, Yoshi’s Island DS is a fairly decent game if you like difficulty and has some pretty fun concepts. It’s got some good boss battles and levels, some fairly nice music and some clever new ideas in general, so it’s definitely had some effort put into it. Just keep in mind that the difficulty does severely ramp up during the later stages and that it’s not a game for the faint hearted.

If you don’t like difficulty? Just seriously play something else, because this isn’t the game for you.

Note: This review was originally posted on Talk Nintendo before it’s closure, and the opinions of the author may have changed since that time.