These Labo VR missions add a small bit of replay value and are fun to try out, but their lasting appeal is minimal.

A couple of days ago, Nintendo added Labo VR functionality to both Super Mario Odyssey and the Legend of Zelda Breath of the Wild. For the latter it was a pretty simple addition; you can now just experience the whole game with the headset. Nothing too special (and apparently quite disorientating according to those who tried it out), but neat enough none the less.

But Odyssey was a bit different. Why? Because as the trailers clearly showed off, the VR sections there weren’t designed as part of the normal game. Instead, they’re meant as side missions to tackle after beating it, set in various kingdoms Mario’s already been and with new objectives to complete in each one. 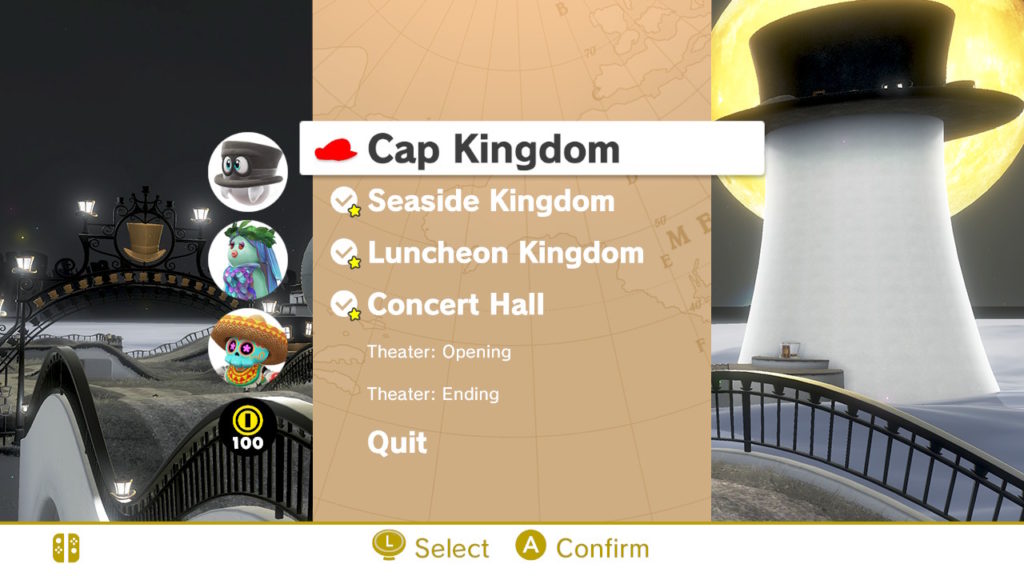 The main menu for the mode

In a certain sense, it’s almost like another round of DLC for the game.

So in this review, we’ll give our thoughts on all of it, and tell you straight up whether these missions are enough to bring us back to Mario’s globe trotting adventure.

Starting with the obvious; how does the VR functionality actually work?

Well as you can probably guess, not in the traditional sense. Like with Breath of the Wild, it doesn’t actually turn Odyssey into a first person experience, but instead gives you a pseudo fixed camera setup that lets you view Mario and his world through the VR headset as a neutral observer. It’s really more 3DS style depth than virtual reality.

And its implementation is fairly mixed here. On the one hand, it’s a lot more bearable than Zelda was. You won’t get disorientated from the camera swinging around wildly and with levels actually designed around the functionality, you’ll never end up with Mario being hard to see or poorly positioned on screen like you might have elsewhere.

So it’s at least usable, we’ll say that much.

Yet it’s also rather lacking to experience to be honest with you. Again, this doesn’t feel like VR. It feels like you’re playing a Super Mario 3D Land bonus room with the camera glued to the floor.

What’s more, it’s also rather annoying to move Mario around with such a view as well. Remember, 3D platformers work because the camera can move with the main character. Good camera design is the bread and butter of the genre.

But Odyssey’s VR missions don’t have good camera design. Instead, you’ve got a clunky system where the camera’s glued to the foreground and Mario keeps running in and out of the screen, making it hard to track where he is in 3D space. It’s infuriating to deal with really, and makes exploring the worlds significantly more of a chore than it’d be with a typical 3D platformer camera setup. 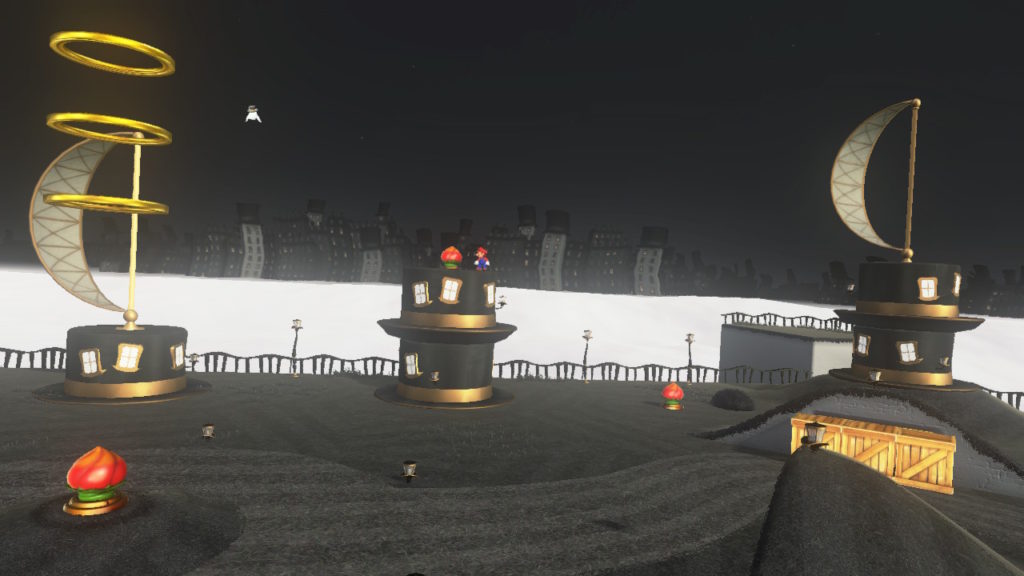 If Mario goes too far away, it becomes very hard to judge where he is in 3D space

Fortunately, Nintendo did at least design their new missions around this. Instead of having to explore vast worlds and do tricky platforming with this setup, you’re instead running around hub like areas collecting music notes and doing basic missions for NPCs.

It’s a more toned down experience, but it’s one that worked well for these missions.

And we liked that. Far too often, game developers seem completely blind to the limitations of their engines, and design levels that make the flaws stand out rather than work around them.

For example, Hello Games made a terrible 3D Mario fan game called Super Mario Prism, then decided to put tricky platformer and physics puzzles in it.

And the makers of a mediocre Mushroom Kingdom Fusion clone called Super Mario MF used an outdated engine with horrible physics for their own game, then built lengthy stages filled with hard to avoid enemies and precision platforming that the engine made virtually unbearable.

To see Nintendo not make that mistake, and design simple stages their VR gimmick worked with rather than against is something to truly admire here.

That said, they may well have overdone the simplicity too. That’s because while the levels worked well with the new VR setup, they also felt very samey too, with the exact mechanics being used for every mission. You’d pick a level, collect a bunch of music notes, then bring an instrument to an NPC. Rinse and repeat three times to finish the stage. 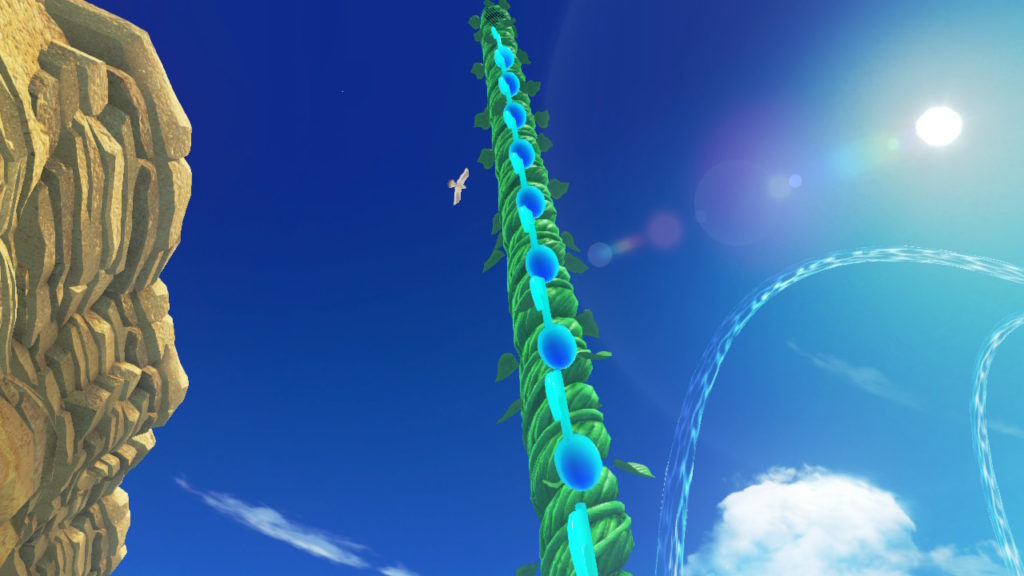 It was all very repetitive really, especially as the main theme of Odyssey is variety. In the base game, every Moon had a unique twist to it, whether that be a capture to control, an environmental mechanic to take advantage of or a mini game to play. You’d talk to people, play jump rope, race RC cars, eat fruit as Yoshi, blast away bricks as a Sherm or do a wide array of other tasks to earn them.

But that wasn’t the case here. Instead, you only got given notes to collect in every stage, and even the basic capture mechanic wasn’t explored at all. It’s not the worst thing in the world, but it’s disappointing none the less, especially given how the only somewhat novel setup (where you had to catch a rabbit to open a cage) still left you with a pointless bit of note collecting to do afterwards. 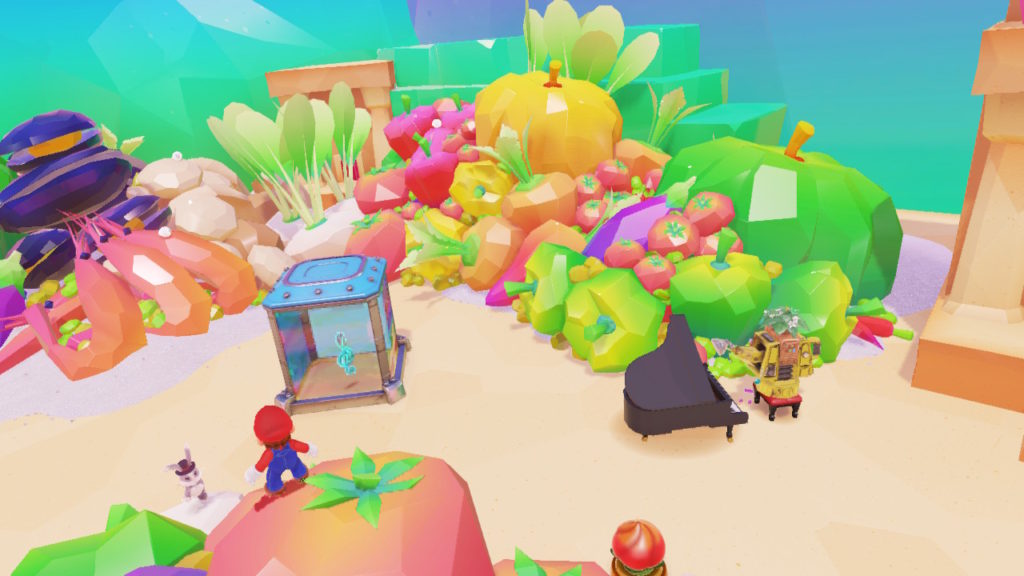 Catching a rabbit is the most varied these missions get, and even the cage’s reward is… another music note

There also wasn’t much variety in the kingdoms you got to explore either. You got the Cap Kingdom, the Seaside Kingdom and the Luncheon Kingdom. And in said kingdoms, you got one basic hub area to explore, plus a small side area with a few extra coins hidden in it (Top Hat Tower, the Glass Tower and the pot on Mount Volbono respectively). 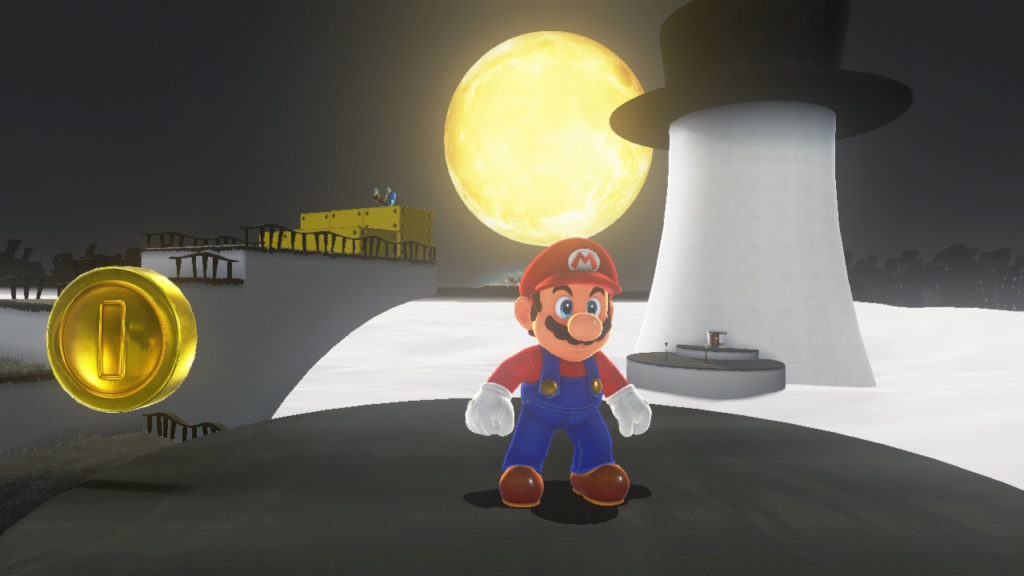 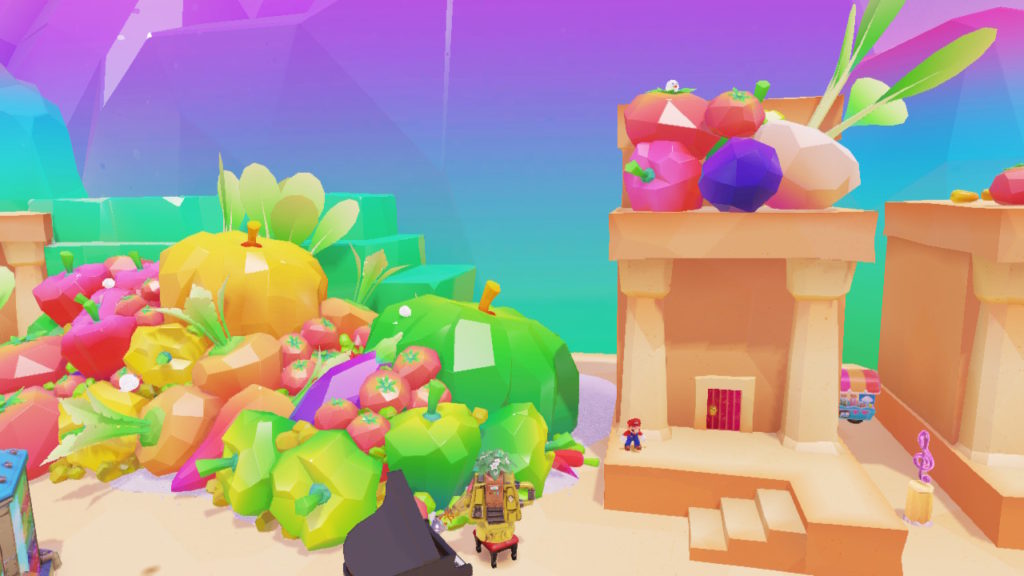 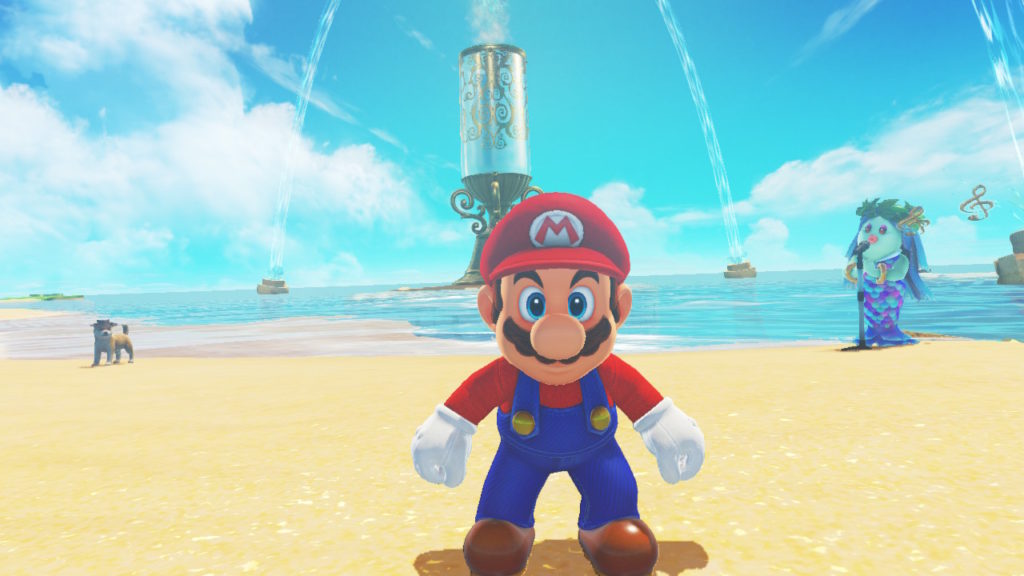 That was it. Two screens, about 10 metres of land to explore and basically nothing beyond that.

And we guess it makes sense to some degree. As said before, the camera system isn’t exactly great in these VR missions, hence anything remotely complicated would probably be a disaster to explore.

So it’s likely Nintendo looked for three areas with no bottomless pits or enemies to encounter, and decided those would work better than the ones with a bit more going on.

They certainly weren’t gonna say here, play through the Darker Side of the Moon with Labo VR style fixed camera views!

Outside of the kingdoms, the new side mode did provide a few other neat extras to go with it. These included another Jump Up Superstar concert in New Donk City hall, the option to view the intro and ending cutscenes with the Labo VR headset, and a few extra bonus missions where you could collect 100 coins in each of the mini levels. Nothing too exciting, but they were neat enough none the less. 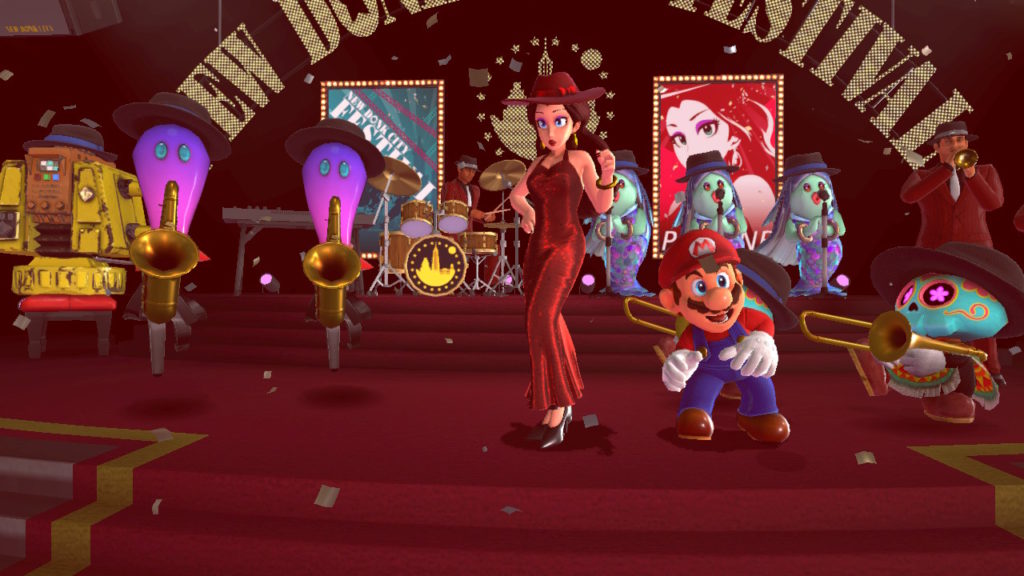 And that sums up the whole experience. A few side missions, a concert and the option to view two cutscenes in ‘Virtual Reality’ mode.

Is it worth it?

Well, probably not. If this was something we’d paid for, we’d probably be giving it a 4/10 score and saying Nintendo were ripping everyone off.

But we didn’t pay for it, and you won’t be paying for it either. It’s just part of a free update to the game, and like with the extra costumes and 8-bit Luigis, something that acts as a fun little distraction while you’re between Luigi’s Balloon World runs/bored waiting for another Switch game.

And given it can all be experienced without needing the Labo VR kit at all, there’s no reason not to try it out. It’s a fun harmless diversion that’ll give you a few minutes more Mario Odyssey goodness, and’s worth the time to try out because of it.