Super Mario Bros 35 is a fun game, but one that's let down by a limited release schedule

Back at the start of October, Super Mario Bros 35 was released for Nintendo Switch. Designed as the Mario equivalent of a battle royale or Tetris 99, the game tasks players with racing through levels and trying to be the last plumber standing.

It’s a neat concept, and one which seems like a perfect fit for the Mario series. Hell, so much so in fact that a fan game called Mario Royale did the same concept about a year earlier, with fantastic results.

But does this one fare? Is Super Mario Bros 35 a better battle royale than Mario Royale was? Does SMB 1’s gameplay translate well to a fast paced online game?

Or is it just an unmanagable, chaotic mess?

Starting with the gameplay side, since that’s really all that matters here. In that regard, Super Mario Bros 35 works perfectly.

You’ve got 35 players all going through random levels from Super Mario Bros 1. By collecting coins they can extend the timer to keep their session going longer, while defeating foes will send them over to an opponent’s game for them to deal with it. It’s a simple formula, yet one which adds a surprising amount of strategy to the game.

Since the enemy send over mechanic isn’t random.

No, it’s player controlled, and can be used specifically to disrupt other players based on how they’re doing in game. Want to be like the Blue Shell and attempt to screw over the leader? Go ahead. Feel like the loser needs one last push to knock them out the game? You can do that too, just target whoever’s got the least time left. And the same goes for people with a lot of coins, those who attacked you, and random opponents in general. 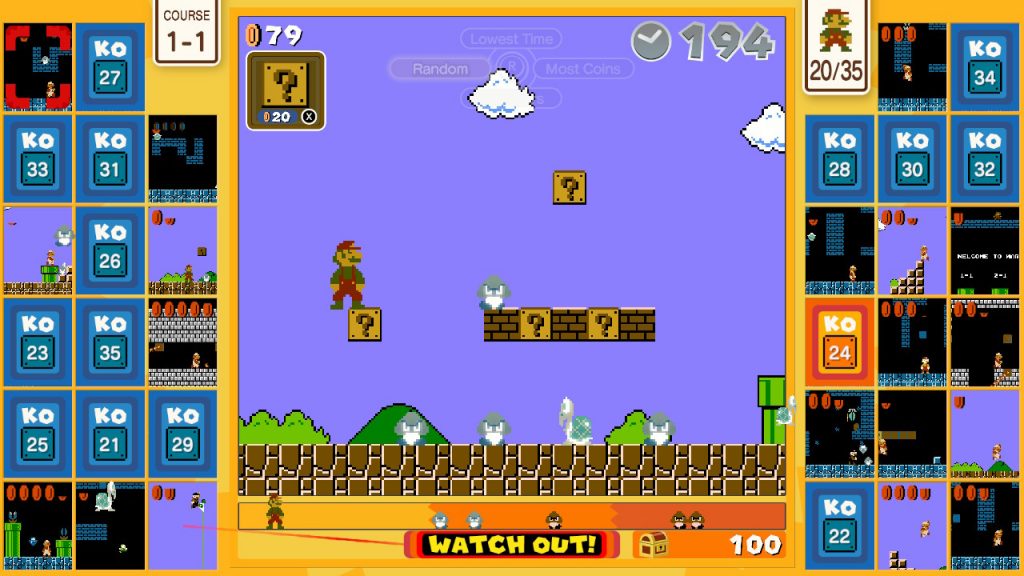 Sending over enemies can really affect even the simplest levels

This is then built on further by the fact you can choose which enemies get sent over by going to specific levels anf taking specific routes too. For instance, you might decide to warp to a castle level, to send that pesky Bowser after your foes. Or you might think a nice Lakitu or Hammer Bro will be enough to blast your rival out of the game. Either way, there’s a lot of strategising that can be done here, and it can be just as cruel as any game of Mafia or Among Us in the process.

And this is especially true later on, when only the last few brilliant players are left standing. Now enemies are being thrown between screens at lightning speed, and even basic stages like 1-1 look like something out of a bad Mario Maker level:

However, this is both the game’s biggest strength and weakess. On the one hand, the chaos is amusing, and if you’ve got enough items (more on those later), somewhat managable.

Yet that’s not always the case here. No, since the bonus item is random and the level designs cluttered, it’s very possible to be forced into situations where you have to die/lose. For instance, a castle level with a Piranha Plant and Firebar in the same location, with no Fire Flower/Star/POW Block in sight. Or a screwed up version of 1-1 where despite having three Bowsers, hundreds of Lakitus and thousands of Goombas to deal with, you’d stuck as Small or Super Mario instead.

They’re simply not fair situations to be stuck in, and mean on many occasions, the chances of you winning depend more on luck/your opponent’s luck than anything resembling skill.

Regardless, the item system does help here, so we may as well talk about it. Basically, by spending 20 coins, you get a random item to use at that point in time. This could be a simple Mushroom or Flower to get you out of a tricky situation, a 1-Up to refill your coin count or a Star/POW Block that can be used to annihilate everything on screen. 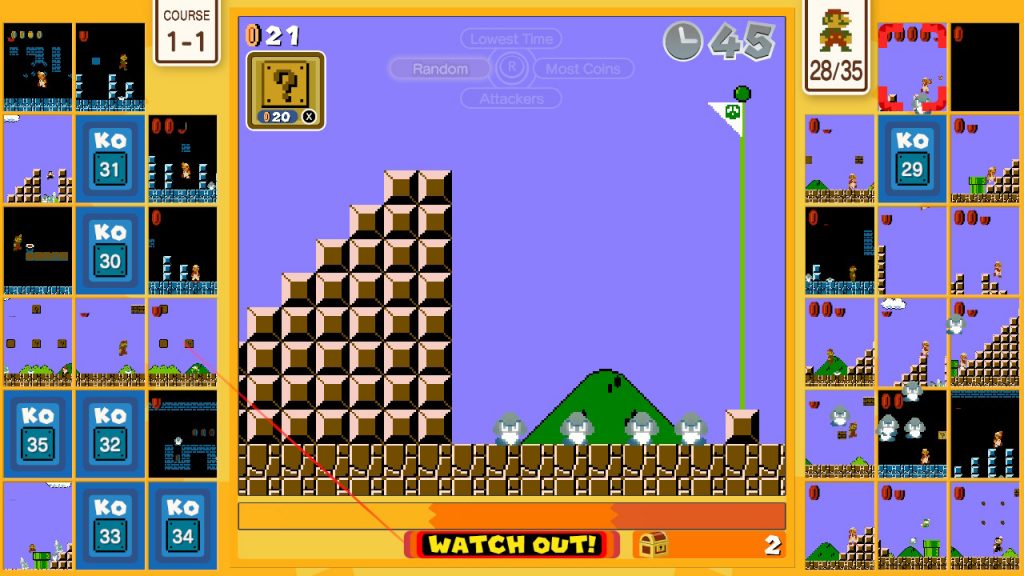 This item could be anything. Do I risk using it?

It’s a useful lifeline for tricky situations, and provides an actual reason to collect coins in the levels. After all, the more coins you have, the more chances you have of getting out of an unwinnable situation further down the line.

Unfortunately, it also sets up an unstable equilibrium that makes a bad situation incredibly difficult to recover from. That’s because if you’re losing/struggling, your coins will probably be going down at an alarming rate, whereas if you’re winning you’ll be flooded with them, to the point you have more than you can ever use.

This results in matches which are incredibly skewed towards the most ‘experienced’ players, and where the runtime is mostly spent watching two-five nigh invulnerable behemoths desparately trying to screw each other up.

Still, it’s not a major problem really. Unlike most Nintendo multiplayer games (*cough* Mario Kart, Smash Bros, Luigi’s Mansion 3 *cough*), you’re not forced to stay all the way through to the end of the match here. No, if you lose you’re booted to the results screen, and have the option to sit and watch the remaining players if you so desire.

So while the matches aren’t exactly well balanced by any means, you’re at least not forced to stay in them, and can hopefully find a more ‘fair’ match up instead.

And that casual friendly setup hammers home just who and what this game was made for. Put simply, it was designed for handheld mode, usually in breaks between other tasks.

With the idea presumably being that hey, you could play a Mario match while riding the bus to work, or in a short break between classes.

In that sense, it works well. The barrier to entry is super low, the time between matches is minimal, and the games themselves tend not to last all that long, at least if you’re an average Joe with middle of the road Mario skills.

But it also means classic battle royale fans might be left a tad disappointed here. For instance, while something like Fornite or Fall Guys might work well as a 2-3 hour play session in a YouTube video/Twitch stream, Super Mario Bros 35 will likely not.

Still, things might improve for that in future. As mentioned elsewhere, dataminers have found that the levels in Super Mario Bros 35 are all prefaced with [term], which implies levels from other games might be considered in future.

If that comes to fruition, then Mario 35 will go from a ‘casual play once or twice a day’ kind of game to one that could keep you occupied for hours or more.

For now though, it’s firmly in the casual play camp, and one you shouldn’t pour too many hours into at a time.

Especially given how many of the unlockables seem to reward that kind of gameplay experience. For example, you gain EXP to level up and unlock new icons based on how well you do in game, and get new level sets by beating the original ones a certain number of times. Add this to the daily challenges that reward you for things like targeting ten opponents with items or getting a certain place in a match, and you’ve got a setup which is very much remniscient of a mobile game like Mario Kart Tour or Mario Run. 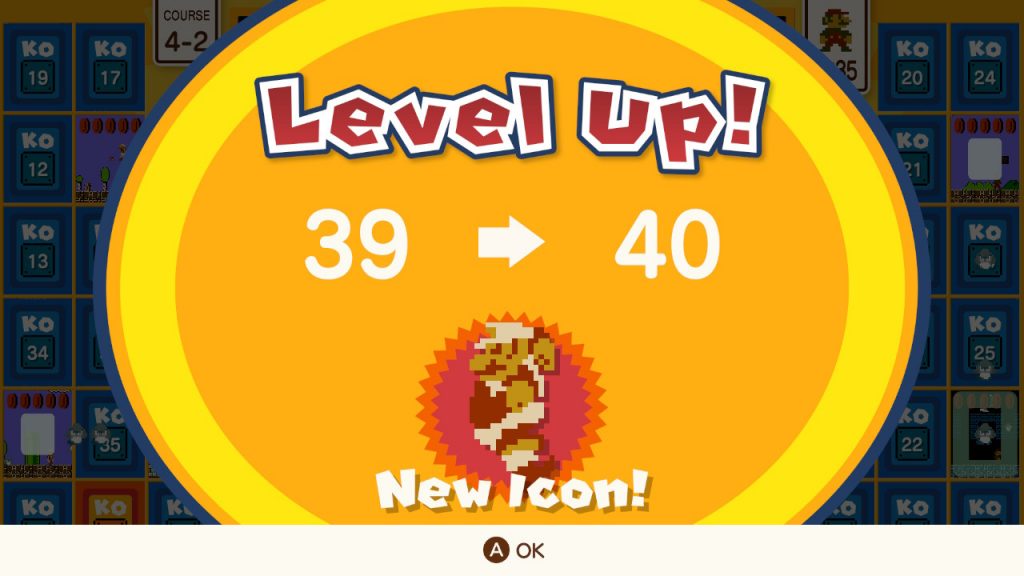 As you can see, you unlock a new icon at each level

So we might as well move onto the presentation.

There basically is none. As least as far as unique presentational elements go.

Caption: This is basically the only new song in the game

Still, the menus are nice enough we suppose, and the music played on them is at least moderately catchy, so it does fine in that respect. 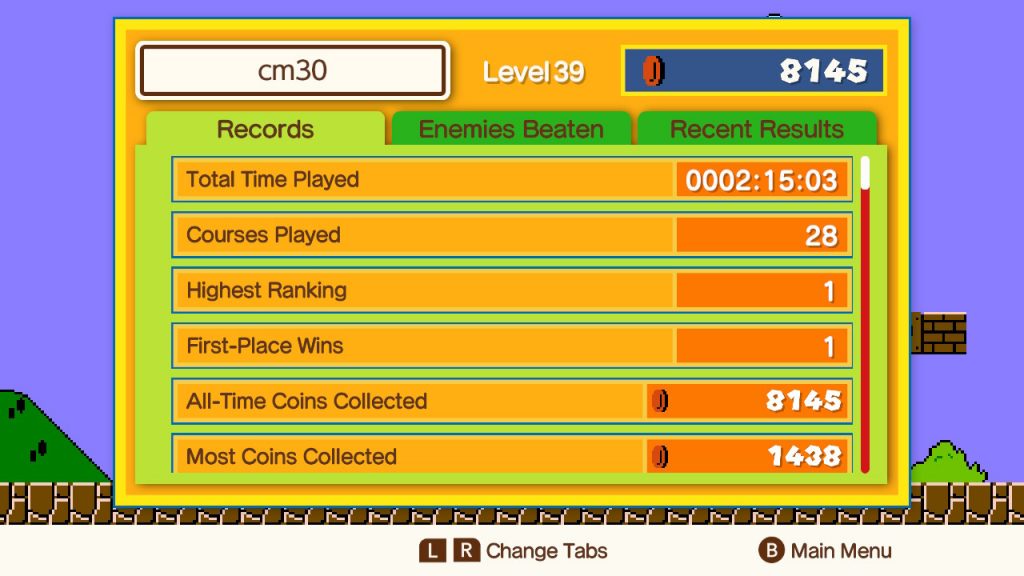 For people that like stats, there are plenty of those too

So overall, it’s a good game. Sure it’s a bit limited in the long term, and the gameplay balance isn’t always ideal.

But the core mechanics work well, it’s an amazing game to play on commutes or between tasks, and the small extras add a nice incentive to return for a match or two every once ina while.

Add this to the game being totally free to play, and there’s no real reason not to try it. You’re not losing out on anything after all, and you’ve almost certainly got a Nintendo Switch Online membership if you’re playing any of Nintendo’s most popular titles at the moment.

There’s just one problem there. One which we’re baffled Nintendo decided was a thing.

Namely, the whole game is a limited time affair. Once March 31st 2021 comes around, that’s it. The game shuts down, and it’s (presumably) impossible to play ever again.

That’s a bafflingly short sighted decision on Nintendo’s part, and one which takes a game with plenty of room for expansion (like the possibility to include non SMB 1 levels) and turns it into a ticking time bomb. Why would you even limit a game like this? Why even make it when you know the whole thing is doomed to die anyway?

It makes zero sense, and makes us want to take a good point or two off the game’s score for this utter stupidity.

Hence that’s exactly what we’ll do. Super Mario Bros 35 may be a good game overall, but it’s flawed release schedule and limited availability mean it’ll be impossible for most people to enjoy, and an absolute disaster for video game preservation in future to boot.

Hence it gets a 3/5. It might be a fun experience, and there’s no real reason not to at least try it out, but the industry behaviour it promotes is terrible and should not be supported at any cost.

Still, what do you think about it? Are you enjoying Super Mario Bros 35? How does the limited availability of the game factor into your opinion of it anyway?