A classic 3D platformer that no one should miss out on

With how 3D platformers and games in general have improved in the past few years, it’s very easy to think Super Mario 64 has gotten a bit dated. Heck, after the likes of the Banjo Kazooie series and Super Mario 64’s very own sequels, the original must really seem a bit archaic to gamers who didn’t grow up with it.

But Super Mario 64 is still a classic. It may not have aged quite as well as the 2D games did (3D games tend to age poorly due to how 3D graphics work), but there is something amazing about this one game that no sequel or imitator has ever quite recaptured. And that’s what this review is going to discover or explain.

Graphically, Super Mario 64 is a bit dated. The levels and objects look blocky, Mario looks less like Mario and more like a Lego equivalent (there’s a reason Super Mario Sunshine was seen as such a massive leap forward technically) and some things just look primitive to say the least.

But there are still a lot of reasons to like this game’s style. For one thing, the amount of charm in the whole thing is immense, you can tell Nintendo has lovingly crafted each and every corner of every level to make it interesting and unique. The levels looked amazing back in the 90s and they still look pretty nice today, despite their somewhat blocky appearance. It’s hard to explain, but there’s just something so amazing when you first step out into Bob-omb Battlefield and see the whole level in front of you, a land filled with possibiities of all varieties. 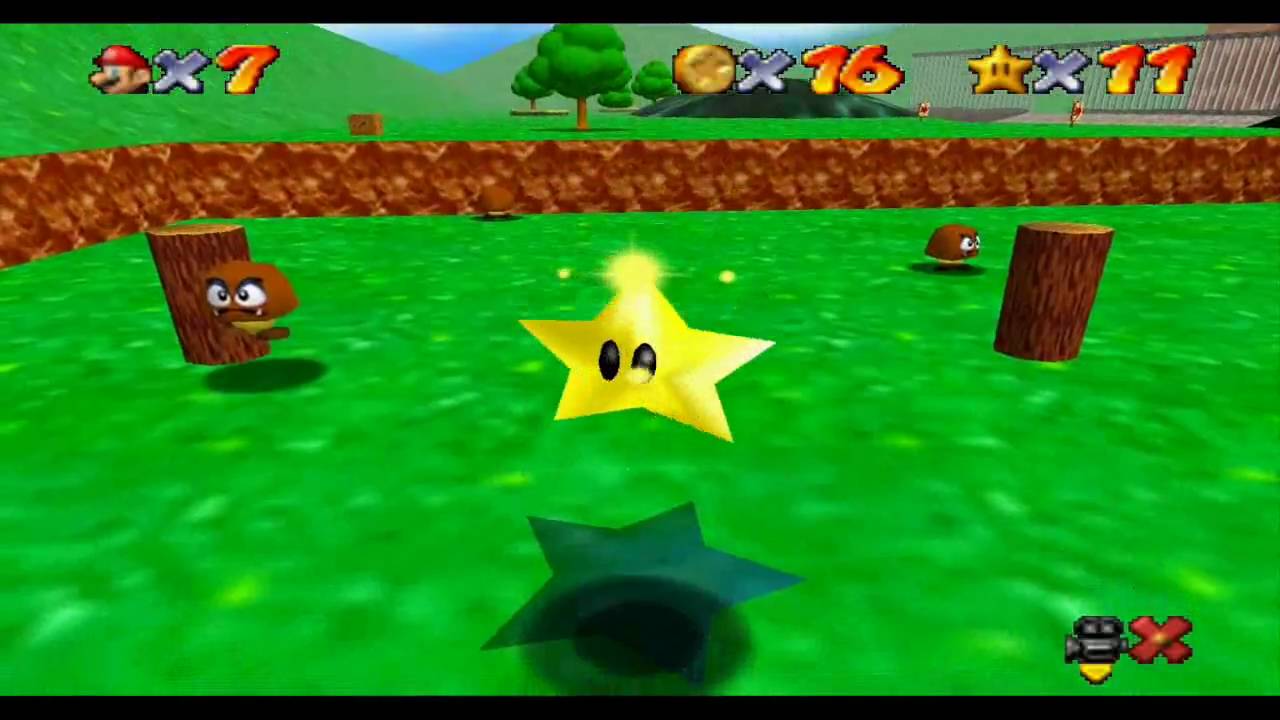 Above: This is probably giving Nintendo 64 era kids a lot of nostalgic flashbacks about now…

Stylistically, there’s also a more ‘industrial’ look to Mario 64 as a game that stands out. It’s still very Mario inspired, but the levels often don’t tend to look overly cartoony like the ones in Mario 3D Land and other such games, they have an appearance which makes them feel almost like real places.

Sound wise, the game is very different from any game since. The music just feels more ambient, almost like background sound rather than the striking, stand out style used in Mario Galaxy 1 and 2. This means while the music is often not quite as memorable and will come across as a bit ‘plain’ when you’re merely listening to it on Youtube or other sites, it just fits the level so well. Just listening to the music from the water levels is so soothing, while the haunted house and cave music always has you on edge and the standard grass theme suits the feel of the levels its played in equally well. Just listen for a bit:

It’s also quite clever how Nintendo only used a very limited soundtrack, yet managed to make the music fit every level so perfectly. You never feel the music is inappropriate, despite the fact the EXACT same theme is used for a desert and a fiery hellscape:

Gameplay however is where it shines. Indeed, this was for its time the ‘sand box’ game of the moment. Go anywhere in any levels you unlocked, complete any missions in any order. Play around in levels for the fun of it. That’s so unfortunately lacking in recent Mario platformers.

It’s actually depressing to look back on the game now, since it’s almost an artifact of a forgotten time where 3D was used to make games fun rather than just send players from cut scene to cut scene. The times where developers would make the levels huge open style worlds where you could do whatever at any time. Some current games still sort of feature this, but I’d say the biggest mistake in gaming was when platformers stopped giving you choices and started being all about being ‘cinematic’ or like some movie. 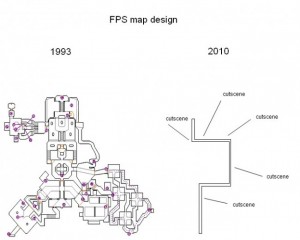 Above: Sadly not limited to First Person Shooters

Adding to the enjoyment of exploring the different worlds and being able to do anything are the power ups. Now, they’re timed rather than being permanent like in 3D Land or the classic 2D games, but all in all they do make the game much more fun. The Wing Cap lets you fly around at will for a while, the Metal Cap lets you be mostly invincible and walk underwater and the Vanish Cap lets you turn translucent and go right through wire fences and enemies. Oh, and the awesome Koopa Shell you can ride across lava, quicksand and water. That’s always been a fun addition that has sadly never returned since.

But really, there’s nothing more amazing than flying around Bob-omb Battlefield for the very first time, having the freedom to take to the skies at any time and to go wherever you wanted. It’s the type of freedom so sorely missing in Mario games since, what with Sunshine, 3D Land and Galaxy 2 lacking such powerful flight options and Galaxy 1 limiting the red star to the two most boring areas of the game.

Super Mario 64 introduced a lot of great gameplay innovations to the series too. Like the ability to go to any level you unlocked and take on any mission you felt like trying. The whole plot point of collecting stars to unlock levels and reach the final boss. Heck, it was basically the start of the 3D collectathon genre that Banjo Kazooie and others like it perfected, and it always has a place in my heart because of this.

It does also help that the level design is amazing and that each area is filled with charm and bursting with secrets to find. Not just the six stars either, there’s also the inevitable 100 coin star, various passages to secret levels, 1-up Mushrooms hidden in numerous devious locations and random teleports with no explanation for their existance. Of all the games in the series, there are so many little random touches and secrets that you really get to feel like Nintendo’s staff had a lot of fun making the game. You feel like each of the levels is a unique world with its own atmosphere and numerous minor elements that just make it feel right.

Why do butterflies turn into bombs and chase you down when you punch them?

Why does Dire Dire Docks lead to the castle pond if you exit past the metal barrier which had Bowser’s face on it?

Why can you teleport between flowerbeds in Bob-omb Battlefield?

None of this stuff is in the manual. It’s like the game’s designers intended you to just mess around and see what you could find. And that’s something so many later games completely missed out on.

There’s also the fact the levels just feel right. The graphics and music fit perfectly, the design feels sort of realistic for the setting and there’s just this magical feel that seems to be lacking in so many later Mario games.

But Super Mario 64 isn’t a perfect game. No, it definitely has problems, and it could be argued many of them are due to what TV Tropes calls ‘Seinfield is Unfunny’. Video games moved on, what was once new and original becomes old and trite and many of the once ground breaking ideas Super Mario 64 originated have now been seen as tired and lame.

The boss battles for instance are dull. Heck, you could even say they’re terrible just like the ones in Super Mario World. But just like that game they were ‘interesting’ at the time. For an early 3D game stuff like Big Bob-omb, Eyerok, Bowser and even to some extent Big Bully weren’t seen as too terrible design wise. They were interesting for people who’d never really seen a 3D action game/platformer before and showed off various parts of the engine. But as soon as Rare started making their Banjo Kazooie and Donkey Kong 64 games, they kind of dated and started to look utterly atrocious in comparison. Look at this lot:

Then compare to this:

Once Rare started including bosses with about twenty different attacks and epic remixes of the level music being in the background, Mario 64’s bosses went from cool to ‘completely boring by comparison’ in seconds. The fact they had things like more animation, more personality and much more interesting designs compared to Mario 64’s ones helped too.

But yes, by todays standards, the bosses in Super Mario 64 are awful.

Another problem the game had is use of platformer cliches that started getting tiresome a few months after the game’s release. Like passing through rings. Clever enough at one point, laughing stock of the video game world after Superman 64 came out. And unfortunately for Mario 64 nowadays, it had quite a few ring passing missions, such as most flight ones.

There’s also collecting coins. Back in the day, getting red coins wasn’t so bad. Neither was 100 gold coins since it got you to explore the whole level. But later in the system’s lifespan people soured on the topic of collecting random junk (the fact Rare seemed to build it into their games and make the amount needed higher and higher didn’t help), and by the times of games like Donkey Kong 64 and Super Mario Sunshine, most people HATED collected 100s of shiny objects any more. Again unfortunately, Super Mario 64 has quite a few of these types of missions and some of them are not particularly entertaining any more.

The camera is also a problem, often trying to choose what the game thinks is the ‘best’ camera angles but choosing ones which make simple jumps just that bit harder. It’s not as bad as in Super Mario Sunshine where you often see Mario’s shadow through a wall because the camera can’t focus on the right side (*cough* Pinna Park Ferris Wheel *cough*), but compared to the camera system used in Mario Galaxy and 3D Land, it’s primitive at best.

But don’t let this put anyone off of Super Mario 64. It may be a bit dated now and it may not stack up to the latest games on a purely technical level, but it’s still a great game. The sheer freedom alone and the amount of care and attention put into each of the 15 courses and Peach’s Castle is already enough of an incentive to own it, you can almost classify it as the first ever 3D ‘sandbox’ game. Definitely buy it now.

Note: Super Mario 64 is available for the Wii U Virtual Console.