A fun and underrated Mario spinoff

With Luigi’s Mansion Dark Moon being so popular and the possibility of a Luigi’s Mansion 3 always being around the corner, it’s best not to forget about the title where it all started.  Released for the Gamecube in about 2001, Luigi’s Mansion was a comedy survival horror game set in the Mario universe, where Luigi had to clear out his new mansion of all the ghosts and monsters that he found there.

So here’s a short review of said game, for all those people wanting to remember the original even after playing the fantastic sequel…

Graphically the game is amazing. Really, of all the games Nintendo was showing off to illustrate the technical power of the Gamecube, this was the one that made me think that I needed the console immediately. Every texture and object looks superb and full of detail to a level not even matched by the Super Mario Galaxy games in some cases, and the effects used for lighting and shadows are some of the best on the entire console.

The trailers for the game show off how great it looks even more so:

When you compare it to the kind of graphics us Nintendo fans were used to on the Gamecube (like Big Boo’s Haunt from Super Mario 64), or even the graphics quality used in most Playstation games, it looked absolutely outstanding in comparison. It’s the most realistic haunted house in the entire Mario series that mansion and to some potentially even the best looking area period.

Music wise, some reviewers on IGN and Gamespot complain it’s not varied enough, but it’s still got an amazing soundtrack regardless.

What might surprise people though is how different the soundtrack is from the style used in any of the other Mario games or spinoffs. Whereas the mainstream Mario series uses somewhat upbeat, happy music for the ghost house areas (like in Super Mario Galaxy and 3D Land) or stereotypical ‘haunted house cartoon’ music (such as the soundtrack in Wario Land Shake It), Luigi’s Mansion’s music has a very much more ambient style to it. It doesn’t stand out as much as say Super Mario Bros 1’s overworld theme does but it doesn’t need too, the music enhances the atmosphere greatly and always keeps you on edge throughout. That dark rooms theme posted above for instance really does make you fear some kind of horrible ghost or monster is going to attack any minute now, and the outside theme is almost touching and solemn:

The graphics and music really do help with the eerie tone present throughout the adventure in a way that the somewhat boring music and graphics style used in many a normal Mario ghost house doesn’t. Compare it to this: 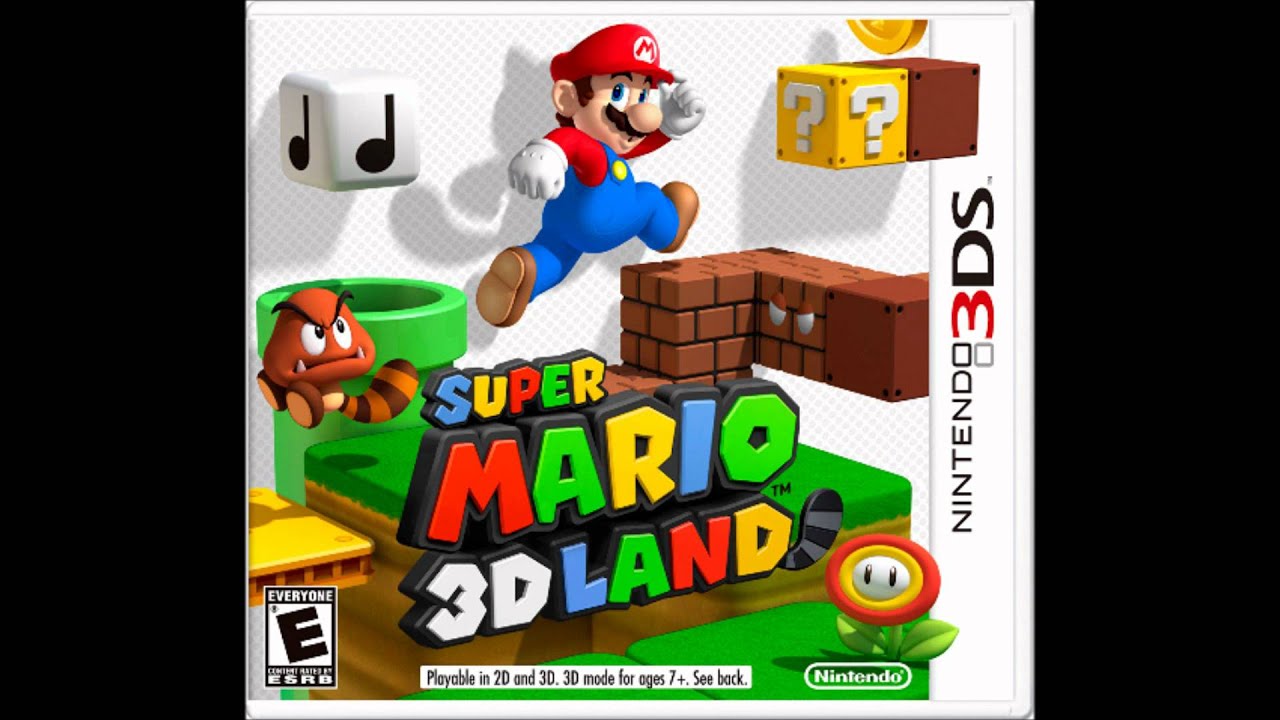 And you can see how different the atmosphere conveyed by the soundtrack in Luigi’s Mansion is even if it isn’t so varied.

Gameplay is good too, although arguably of comparatively lesser quality than the graphics or music. In fact, let me get one thing straight to anyone wanting to try Luigi’s Mansion:

It’s not a Mario game. It’s not a platformer and you cannot jump.

What you have instead is an action adventure game built around puzzles and parodying the survival horror genre. It’s very different from the likes of Super Mario Sunshine or Galaxy in that you can’t physically bypass puzzles via your acrobatic skills (partly because the mansion almost always has a ceiling) and Luigi cannot physically beat up the ghosts like Mario can in his adventures. Instead he comes armed with a modified vacuum cleaner called the Poltergust 3000 (another one of Professor E Gadd’s multitude of inventions) that’s used to suck up ghosts, shoot out fire/water/ice and generally navigate the mansion. This item is controlled pretty much the same as FLUDD’s default water squirting function in Mario Sunshine (aka by using the C Stick) and works perfectly.

2. Defeat all the ghosts in room/solve a puzzle to make ghosts attack

3. Solve a puzzle/defeat ghosts depending on step 2

5. Use the key/elemental power from the medallion to open up another room and repeat the process.

To break up the above, you have portrait ghosts and boss ghosts. The former are pretty much the equivalent of bosses/mini bosses in your standard Mario game fortress/tower level, the latter the equivalent to the Koopalings or world bosses from the Galaxy series. These are the most interesting battles in the game since you need to find the ghost’s weakness (like a Legend of Zelda boss fight) then suck it up with the Poltergust when its heart is exposed. Oh, and they always have exactly 100 HP, with the exceptions of King Boo and Boolossus.

If the structure of the above sounds a bit familiar, you could probably sum up the gameplay as ‘Legend of Zelda dungeon in a mansion setting’, albeit with a vacuum cleaner instead of the Master Sword.  Kind of like in its sequel really.

It’s great fun though, and everything’s kept generally varied enough that you’ll never end up doing the same thing more than once. Unfortunately though, there are drawbacks.

The main one is the game’s length, and that’s that the game is extremely short. You can beat the whole thing in just a few hours if you’re either a good player or just know what you’re doing, and even the worlds worst gamer is unlikely to spend much more than a day on the game.

However, is this really that bad a thing? Because the game itself is set in a single building, and real world mansions are hardly ever meant to be the most interesting building design on the planet. In fact, it’s actually kind of amazing Nintendo managed to design an entire house where the most ‘identical’ rooms were two toilets. Literally, every other room in the mansion is completely different from every other room, which is an impressive feat considering that your average house is described by number of bedrooms and bathrooms it has. Indeed, there are so many different types of rooms that I had to actually look up the meaning and purpose of some of them in the dictionary since in no way are they the kind of location found in your standard British/American/Japanese home. Heck, they were already starting to stretch credibility a bit with the inclusion of a medieval armoury in a standard house, it wouldn’t make any real sense to add random Castlevania style rooms like towers, graves, chapels and gladiatoral combat arenas, all of which are near enough the only type of rooms the mansion hasn’t got in it.

There are some other minor issues though. For one thing, some of the later portrait ghosts seem really lazily designed such as Jarvis. I mean, look at him: 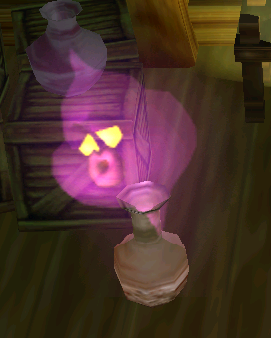 In a game where most bosses have an interesting, mostly humanoid design, this guy comes across as almost completely out of place.

In addition to this, it does seem like sometimes gimmicks are introduced and just discarded at almost random intervals. Take the elemental medals meant to provide extra depth and solve various puzzles.

Above: The medals don’t get much use in this game.

The fire one is introduced at a logical point in the game and with various uses for it planned throughout the mansion. But the water one seems to be just randomly thrown at you when you reach the kitchen. Considering that the end of the chapter is about two rooms away, that you only ever need to use it for more than watering plants a few times at most and that generally the game forgets about it for the rest of the game, it seems a wasted power up. Same with the ice one you get shortly into chapter 3, as well as the random gimmick that lets you walk on the ceiling. It just seems like at a certain point in the game Nintendo’s designers just started throwing in gimmicks regardless of whether they could find any practical uses for them. 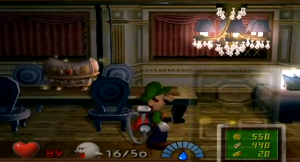 Above: This room lets you invert gravity.  It’s used simply for getting a key off a table.

There’s also an issue of a lack of replay value. Getting the gold frames and nicer looking ghost portraits is okay for fanatical completionists, but most people really won’t have much of a reason to attempt to do this due to the fact you get no benefits from doing so. Getting an A rank mansion is the same, it’s nice, but the difference between the B and A ranked mansions is minor enough that many players probably didn’t care less.

Then there’s the hidden mansion mode. It’s meant to be like a second quest, but it doesn’t really have anything interesting in the US and Japanese versions of the game. You have a slightly stronger vacuum, you take more damage… that’s it. There’s no incentive to play it because of how pointless the mode is.

However, if you get the European version, then the Hidden Mansion actually does provide replay value. More ghosts are in the mansion. Bosses have new attacks, the place is mirrored, rooms are darker, Boos have more health and you have less chances to heal. This makes it feel more like a proper ‘challenge mode’, like a Master Quest version of Luigi’s Mansion.

Above: The PAL Hidden Mansion was a bit more interesting than the bland one in the other versions.