An amazing game, and a great upgrade!

It’s by a guest writer of sorts this time, known as re11ding on the Nintendo 3DS Community forums.  He said we could post this up as a review, and since it seems the better of the few reviews the game got on the forums, it’s now an official one for Nintendo 3DS Daily.

Re11ding’s original review is below. Pictures added by editor.

Hello all. re11ding here for another faithful review on a game. Instead of one game though, I’m going to review two!

As I made my purchase for Kid Icarus: Uprising at gamestop, I was offered to buy 3D classics: Kid Icarus for an extra five dollars. I gave in and bought it since I never played it on the original system or on the virtual console. As far as I know, the only difference with this game and the original was the 3D added effect (obviously), Parallax scrolling backgrounds, and the ability to save instead of using passwords. Other than that, the game was the same as the original. Here’s the story: 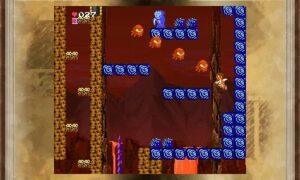 New backgrounds have been added to 3D Classics Kid Icarus

Medusa was the goddess of the underworld while Lady Palutena was the goddess of the Sky World. Lady Palutena game humans life to crops, water, and other things needed to live. Medusa hated mankind and did the complete opposite by killing crops and drying up lakes. For misusing her powers, Lady Palutena transformed Medusa into a hideous one-eyed monster. Seeking revenge, she released her underworld beings and fought against the army of Skyworld. Skyworld’s troops were clearly outnumbered and lost the war. All the soldiers were turned into stone and Lady Palutena is locked up deep within Skyworld.

You start out as Pit, an angel who was imprisoned in the Underworld by the wicked monster Medusa. Lady Palutena used the last of her power to give Pit a bow and arrow. He escapes and begins his adventure to rescue Lady Palutena and defeat Medusa. To do this, Pit had to collect the three sacred treasures guarded by Medusa’s fiercest minions.

As I start the game, I instantly notice the physics to be very similar to Metroid’s physics. You jump high and float back down slowly if you hold the jump button. The B button fires arrows and will continue to fire if you hold B. You begin in the Underworld climbing up to reach the goal. Enemies will spawn in certain places and try to defeat you. When you defeat an enemy, they drop hearts. Hearts are the currency of this game where you can use them to buy items from shops that you encounter during your adventure.

Some items you can get are the feather, bottle, barrel, sacred bow, fire magic, life barrier (if I recall the name right), torches (for maps), pencils (also for maps), and mallets.
– Feathers save you if you fall off screen into a pit.
– Bottles hold potions which heal you if you run out of energy. I forgot to mention that you have health in this game known as “energy”. You start off with one bar. As you defeat enemies to gain more points for your score, you will be rewarded with more energy and also have your arrows powered up to do more damage.
– A barrel allows you to hold up to 9 bottles.
– A torch highlights where you’ve been on a dungeon map if you have one.
– A pencil makes the map appear on the pause screen if you have a dungeon map.
– The sacred bow allows you to fire arrows to far distances.
– The fire magic allows you to fire arrows with a fireball circling it to increase the chance of hitting an enemy.
– The life barrier makes a small crystal circle you as a protection barrier that damages enemies if they touch it. (Can’t confirm this, I never got it myself)
– Mallets are hammers you collect when grabbing a harp that turns enemies into mallets for a short time. You use mallets in dungeons to break the stone that the soldiers of the skyworld are incased in. By freeing them, they help you when you reach the boss of that dungeon. Using a mallet to free a soldier will cause the mallet to break.

The game is both a sidescroller and a vertical scroller. I enjoyed how they mixed the two. The game was short but incredibly fun. Obviously the game was short due to it being an NES game but it’s difficulty made it longer. It’s certainly one of the few NES games that managed to keep my interest and enjoy throughout the whole time that I played it. You can’t beat its music either. It definitely deserved a rating of 10/10 from me.

Now, I begin playing Kid Icarus: Uprising. ……holy s***. What just happened? The little 8-bit guy I used to know and love just got a 3D model with weapons beyond the eye can see. Just play the first chapter of this game and you will obtain that “IT’S ON” feeling.

You learn that Medusa has been resurrected and is reeking havoc all around the world. It’s up to Pit to stop her. Every level begins with a “rail-shooter” as most people seem to call it. Again, imagine Star Fox 64 and it’s game play where you flew in a straight line dodging and shooting while the vehicle moves forward by itself. That’s basically what part of the levels are in this game. You are flying through certain areas in order to reach a certain destination. Once you reach there, you begin land battles. Land battles are more different than air battles. You can control Pit around the area and also execute different moves that you couldn’t while flying. Land battles reminded me of Metroid in a way. It was basically a third-person shooter. You also obtain power-ups throughout the game of which you can equip and use on the field. 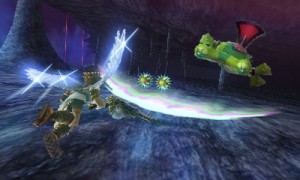 I did happen to forget to mention that this game uses the touchscreen to aim. You can also set up controls to use the ABXY buttons to move your reticule or hold R to move it without changing settings. I just stuck with the touchscreen since it was the simplest way.

What was amazing about this game? Oh god, where do I begin?

The gameplay is certainly a good place to start. I explained how there are two different parts of levels. This mix, along with something new from Nintendo, threw me for a loop with amazement. I never played Metroid myself, but I knew land battles were similar since my friends kept saying so. Either way, it was a new experience for me. It was one heck of an experience too.

Another strong point was the music. All the music in this game was orchestrated! Beautiful! That’s not the half of it though. You know what this game did? It literally keyframed the music along with air battles to become more or less dramatic at certain points in order to perfectly fit the move. Amazing move right there. All the tunes are catchy and well done. You will hear the Boss Fight 1 song quite a few times, but that song’s so amazing, you’ll never get tired of it.

My favorite part was the cross-references! There’s nothing more I like than a good ol’ cross-reference to another game. This game didn’t feature 1 cross-reference, not 2, not 5, but over 7 cross-references in the game. The references are usually located in the dialogue so just listen closely when Pit is talking. Oh, this game loves to make fun of its old 8-bit enemies by showing how they looked before and how they look now. All this created many chuckles.

If there’s one thing this game excels at, it’s settings. The settings of this game. My oh my, you’d fall in love. I normally don’t focus on my surroundings in games, but Kid Icarus: Uprising had me in aw. All locations are styled perfectly. It’s almost impossible to complain about one setting.

Replay value. Yes. You couldn’t have asked for such a great game. You know how Super Smash Bros. Brawl had that achievement board that gave you prizes for doing certain things? A similar board is in this game too. Not only that, but like trophies in Brawl, there are Idols in this game! Basically, Idols are the trophies of Kid Icarus: Uprising. You will want to replay the game a few times to get them all. And believe me, you won;t get tired from this game easily.

Online battling. Good call Nintendo. I only tried it once or twice, but you can fight random people online in this game. Based on your performance, you can even earn weapons or power-ups by just playing online!

There’s not much else I can say about the game. It’s actually quite hard to give a short review of this game.

Trust me, Kid Icarus: Uprising is definitely worth getting. It definitely deserves a 10/10 too.