Conduct Together is a train management game that is like Overcooked on tracks.

Conduct Together is a unique train management game that can be played by up to 4 players – quite suitable for the Nintendo Switch hype train that we’ve been riding on the last couple of years. The concept is simple, as the player you are acting as the train conductor, where you can control the track switches to send trains on their way, while at the same time you also control all the trains themselves.

The game play is simple, you have to manage your trains and collect passengers and deliver them to stations. Each stage that you take part in has a target amount of passengers you have to successfully transport.

Sounds fun and easy right? Maybe if you only had one or two trains. But when you have four or five trains, it’s chaotic. If any of the on-screen trains crash with another train or object, your game is over. This is basically Overcooked on train tracks. It’s crazy, it’s madness. Conduct Together is easy to play but immensely difficult to master. 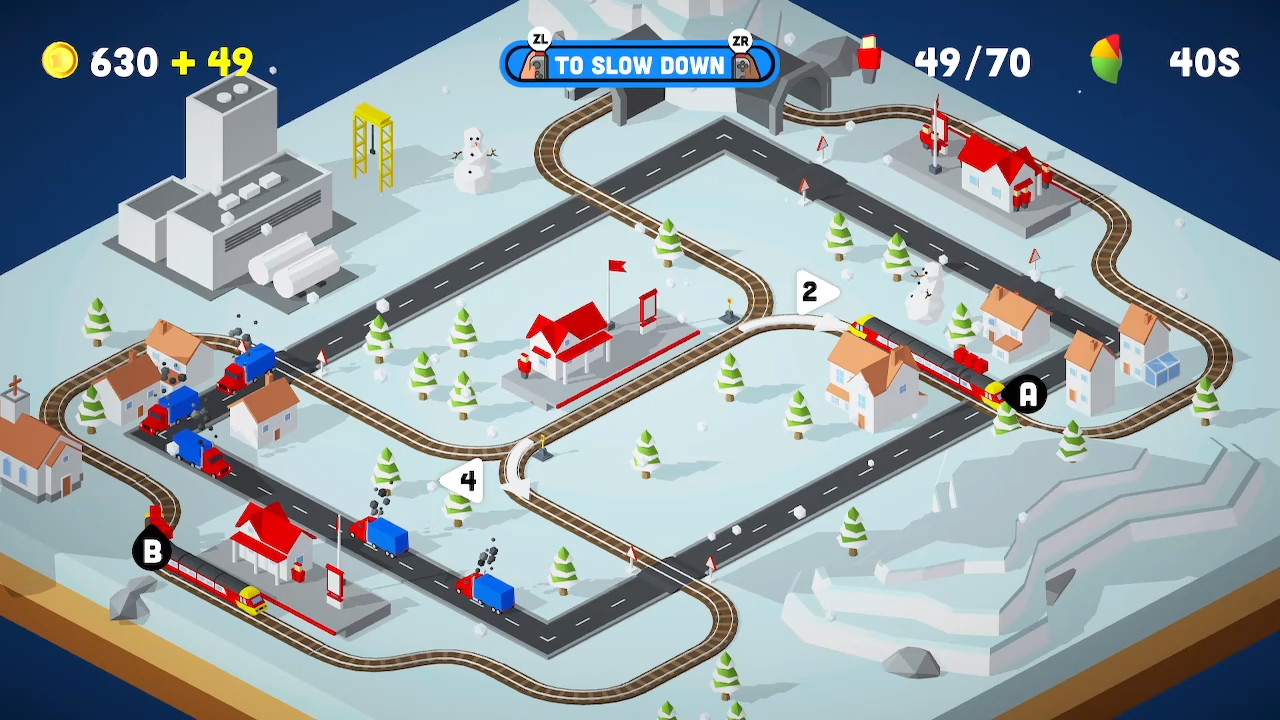 Winter themed stage in Conduct Together

Passengers and stations both come in four different colours: red, yellow, blue and purple. You have to deliver the right coloured passenger to their station, for example, red passengers have to be taken to a red station.

If a train is empty, when it arrives at a station, one colour of passengers will board, and if it stops at any other station, it will continue to pick up more passengers of the same colour. You have to carefully manage the trains to make them productive and to avoid long dwell times. That means monitoring which stations need passengers to be picked up, what’s the shortest path to a destination station, and most importantly, avoiding a crash.

What makes the game complex is that the tracks often loop around and intersect like crazy, and the addition of numerous hazards that can impede your train management. Chaos is normal here! There are cars crossing the tracks, random freight trains (that you must try to divert), even trains that will steal your passengers! If any train crashes (even ones that aren’t in your control), you’re done and you have to start over. 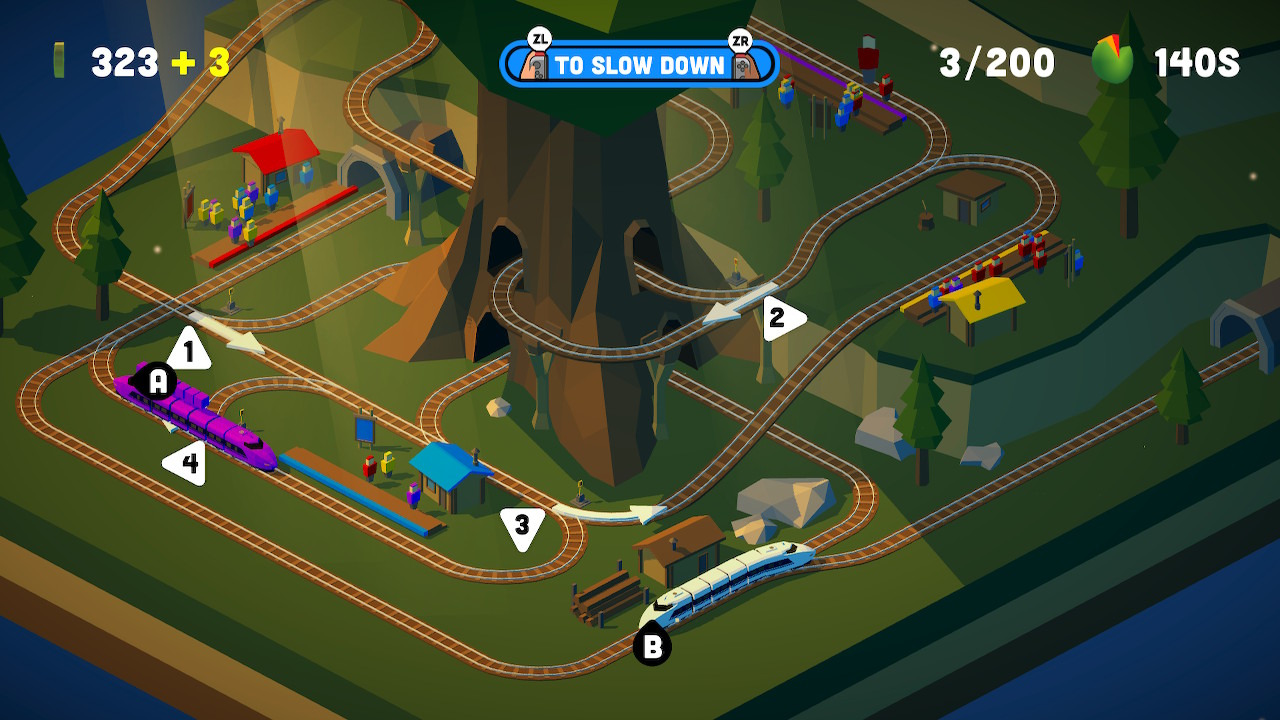 Crazy intersecting tracks in Conduct Together

As you progress along and complete a new world, you’ll get a new train to unbox and put into your train set. It’s like having a toy train collection! The trains in Conduct Together are based on trains in the real world or from a themed area you just played in. Choosing a different rolling stock is only for aesthetics, they just look different and have a different honk.

The graphics are just OK – it’s basically comparable to mobile game quality, but most importantly everything looks sharp and the framerate is very smooth unlike similar co-op games like Overcooked that lag when the screen is filled with objects. There’s decent in-game audio, with relaxing elevator-style music and special music for themed areas. Sometimes it can feel too relaxing considering how hard some stages turn out to be.

The controls in Conduct Together are simple, the game can be even played with a single Joy-con. The four directional buttons are used to switch the tracks, and the remaining buttons are used to drive the trains – by pressing a button to start and stop a train.

The developers assigned numbers to each direction on the directional buttons: 1, 2, 3 and 4, in theory it’s to make it easier to call out to your fellow players about which track switch to switch, however this often ends up being a bit unintuitive. The track switches are arbitrary since the stages are quite varied, and since there’s no “button number” on the directional buttons so it just doesn’t make a whole lot of sense.

Alternatively, when playing in portable mode, you can simply touch the screen directly to manage the trains and tracks, just as you can on the standard touchscreen mobile version of this game.

If you find managing the trains at full speed too hard, there’s an easy mode that can slow the trains down so you don’t have to react as quickly. In addition, there’s also in-game slow down which slows down time for a couple of seconds so you can think about your next move. This option sounds useful, but can actually be tricky to execute as it’s totally different compared to the usual reactionary nature of the game.

Although this is just a “train game”, there is a surprising amount of depth to play through, it is also great for a party game as the controls and game concept are extraordinarily simple to just pick up and play for novices.

Conduct Together is available on the Nintendo eShop (it can be regularly found on sale) and it is definitely a quality independent game to play on the Nintendo Switch. If you find playing Conduct Together to be a breeze, maybe it’s time to apply for a new real-life job at your local transportation company. Thankfully, real-life trains don’t crash as much as they do in this game!