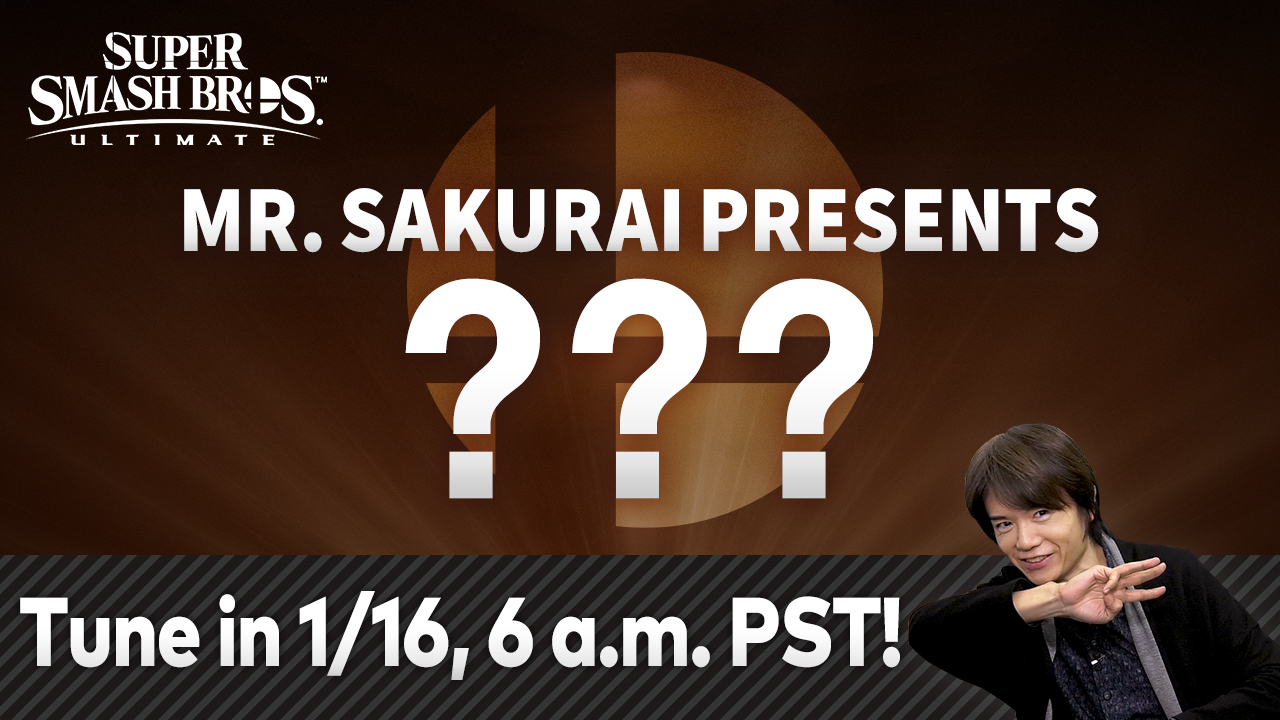 As you know, Super Smash Bros Ultimate has been getting new playable characters via the Fighter Pass since April 2019. This pass was stated to provide five new characters for the game, of which four (Joker, Hero, Banjo & Kazooie and Terry) have already been released.

However, there’s still one mysterious fighter left. And given the Fighter Pass was set to be ‘completed’ (read, last character for it released) by February 2020, their identity left a lot of people wondering. Who is it? Who is this mystery character who’s supposedly about to be added to the game, yet who we haven’t seen hide or hair of since the game’s launch?

Well, we’re soon about to find out. Because in just two days, Nintendo will indeed reveal who the next DLC fighter will be for Super Smash Bros Ultimate.

That’s because Nintendo is holding a Super Smash Bros Ultimate livestream about just that. This livestream will air on January 16th 2019, and will provide a detailed look at said character in a 35 minute presentation from series director Masahiro Sakurai.

Join Super #SmashBrosUltimate director Masahiro Sakurai on 1/16 at 6am PT for a roughly 35 minute video livestream featuring an in-depth look at an upcoming DLC fighter, which he will unveil in the video! pic.twitter.com/aOz0ilAiXU

In addition to a quick table listing when the presentation will air in various region:

However, who could this new fighter be? Will they be the only thing mentioned in the presentation?

Well we’re not sure to be honest. For character choices, the list is almost endless, and it’s impossible to know whether Sakurai’s pose in the picture means anything at all. Is it a pose often used by the character? A hint about the number three, like them being from the third in the series?

Or merely a coincidence entirely? Honestly, it’s impossible to tell.

And that’s also true in regards to the possibilities of other reveals in the same video. Because here’s the thing. We know this isn’t the final newcomer Super Smash Bros Ultimate will be getting.

No, it’s only the final one in this Fighter Pass. As mentioned by Nintendo in a previous announcement, further DLC is in development, and that could come in the form of either standalone paid DLC or free extras like Piranha Plant was early on.

Hence the end of this presentation could give a bit more info about that. It probably wouldn’t be much (just a ‘this is how much DLC is coming for pass 2’ type deal), but we can see info for extra DLC being mentioned none the less.

So yeah, we’ll find out who the last Fighter Pass newcomer for Super Smash Bros Ultimate is soon enough.

But what do you think about it? Are you excited to learn who’s being added to the game? What characters do you think’ll show up this time?

Tell us your thoughts in the comments below today!