With its release date drawing near, it’s no surprise that Nintendo are releasing more and more ads for Super Mario Maker. Indeed, over in Japan right now, ads for the game are all over shops and other retail areas, aimed at showing off the game in preparation for its June 28th release date.

For the most part, they’re pretty standard stuff too. You’ve got the typical official artwork for the game with Mario & Luigi building levels together, a few screens from the Directs and press releases, and that’s it.

However, there’s one exception to this. One ad which really stands out from the rest.

And that’s the one shown here. Why? Because it actually reveals a fair new elements found in the game.

Unfortunately, the one there is a little blurry. No worries though, Twitter user Black60Dragon managed to get some clearer pictures of it, as shown here:

High quality pictures of the most recent #SuperMarioMaker 2 ads in Japan. Special thanks to Dokkrok over on Reddit for sending me these 😃

Which in turn lets us look at all the new elements a bit more closely. 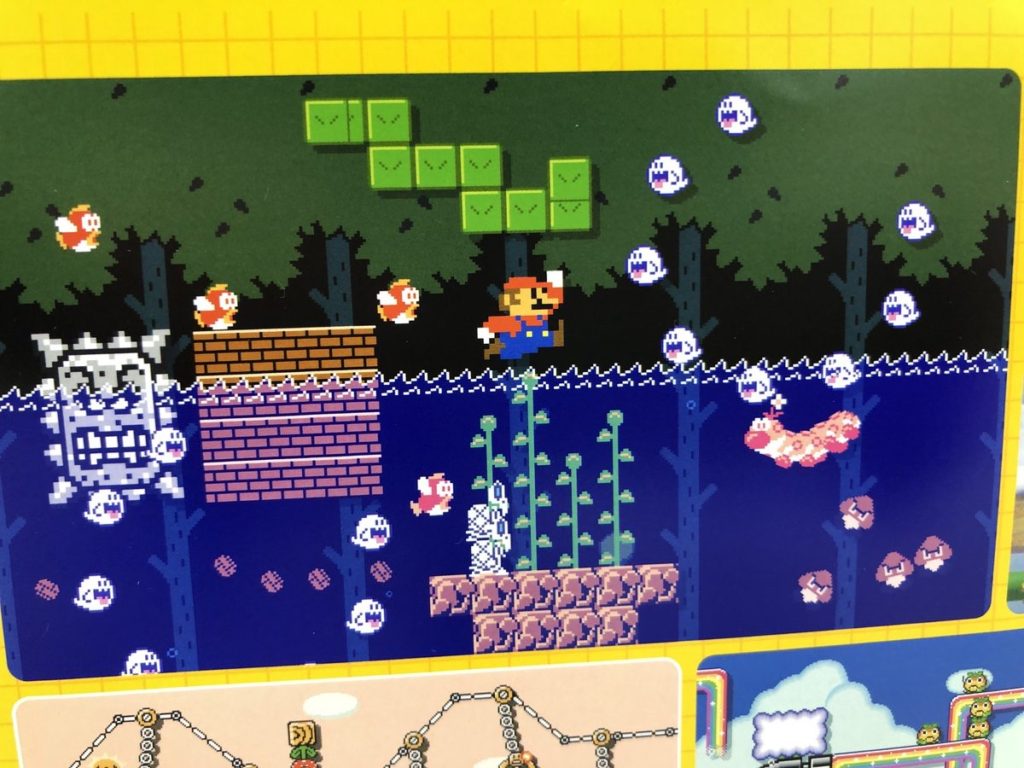 Now though, it does have such a theme. Looks pretty nice too!

And the screenshot doesn’t stop at just giving away info on the theme either. No, Mario’s own appearance raises a few intriguing questions about the game too.

Which in the original Super Mario Maker was only available through a Mystery Mushroom. So it appears to hint that Mario’s various costume forms will return here too, and that amiibo support will likely come with them.

Fitting given the wide array of themed outfits/Mario sprite swaps was a huge focus in the Wii U title.

Lastly, it also features Snake Blocks in the Super Mario Bros 1 style as well. Not too exciting, but a neat confirmation they’re not limited to games they used to appear in none the less.

The desert screenshot has a few nifty reveals in it too. Most notably, the enemies hanging on wires/line guides in the stage. 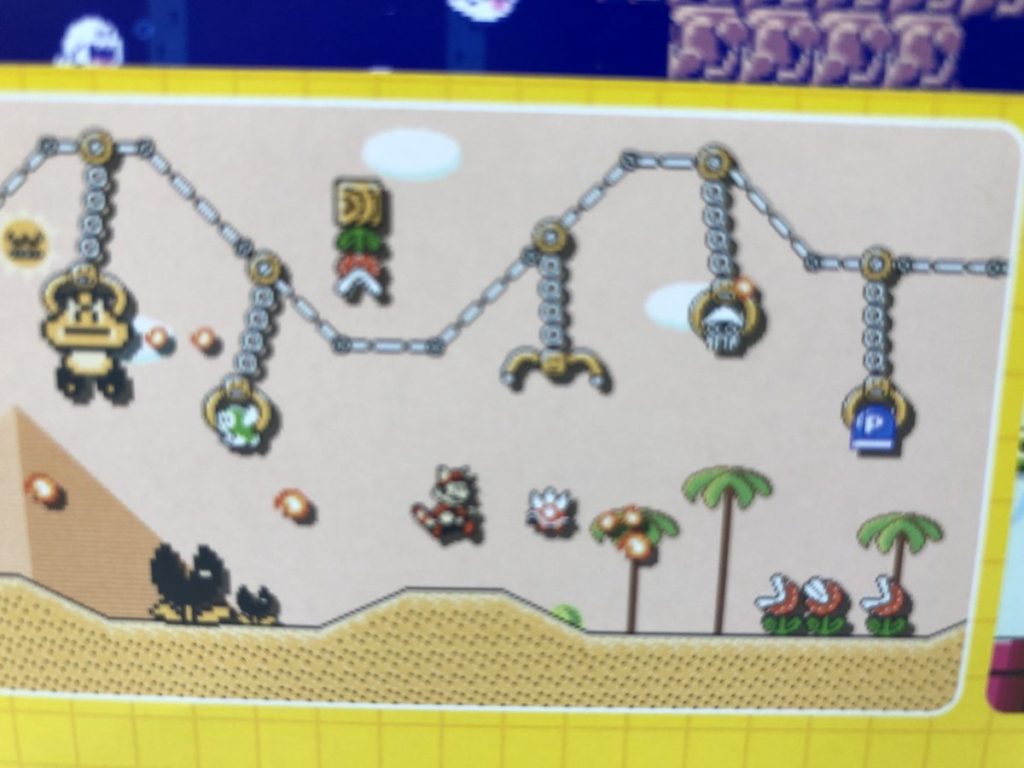 Yeah, it seems enemies aren’t limited to just being placed on guides here. Instead, they can actually ride hooks going along the lines too, implying they may also be able to drop down when above Mario or what not.

It’s a neat addition, and one that’s more than a little remniscent of the Fuzzies, Chainsaws and other line riding obstacles from Super Mario World.

There’s also a cloud level screenshot too, in the Super Mario World style. This one doesn’t feature too much in the way of major course elements, but it does show a few neat theme details none the less. Such as rainbows, cloud blocks and multi coloured pipes not seen in the original game. 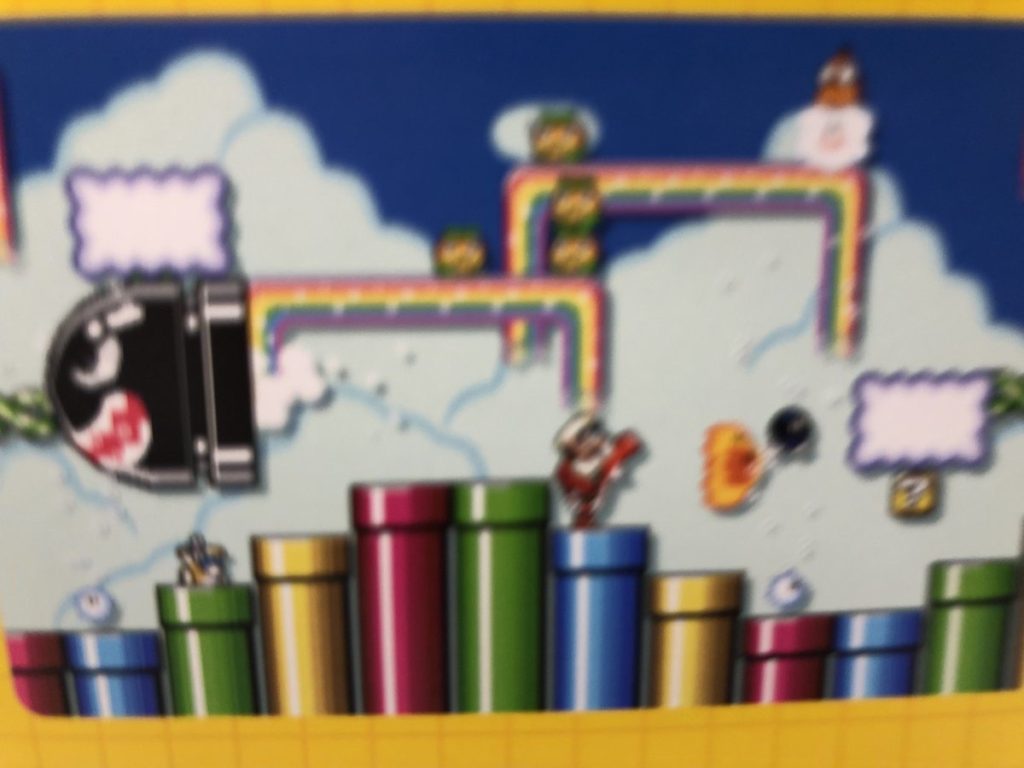 This indicates that a cloud/sky theme may be a possibility in this title too, since while the original airship theme had a few elements like this, it was more focused on machinery and ship parts than rainbow and clouds.

As for the lava level screenshot… well there’s not much to discuss there. Except it’s a night level with lava as a course hazard. 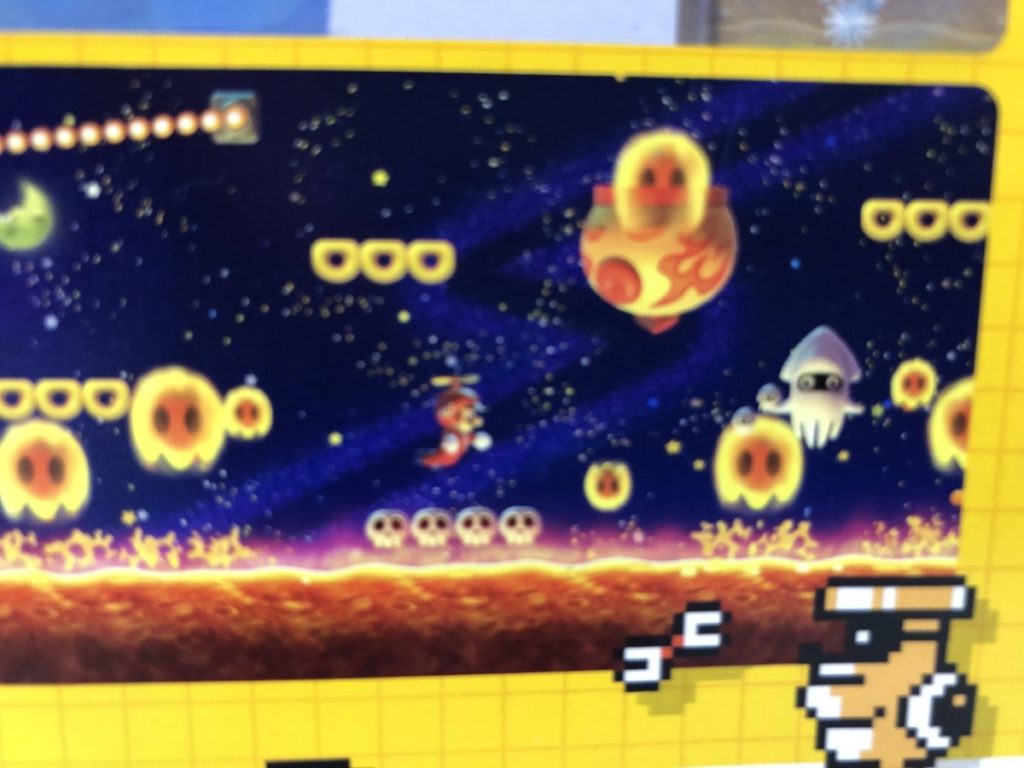 But that’s actually an intriguing setup in itself. That’s because in previous screenshots, the same theme was shown with purple poison/toxic water instead. This indicates that the player can choose which ‘hazard’ is in play throughout the levels, with water, lava and poison being the three options we’ve seen so far.

But the best screenshot and the most interesting one of the bunch… is the ice stage in the 3D World style. 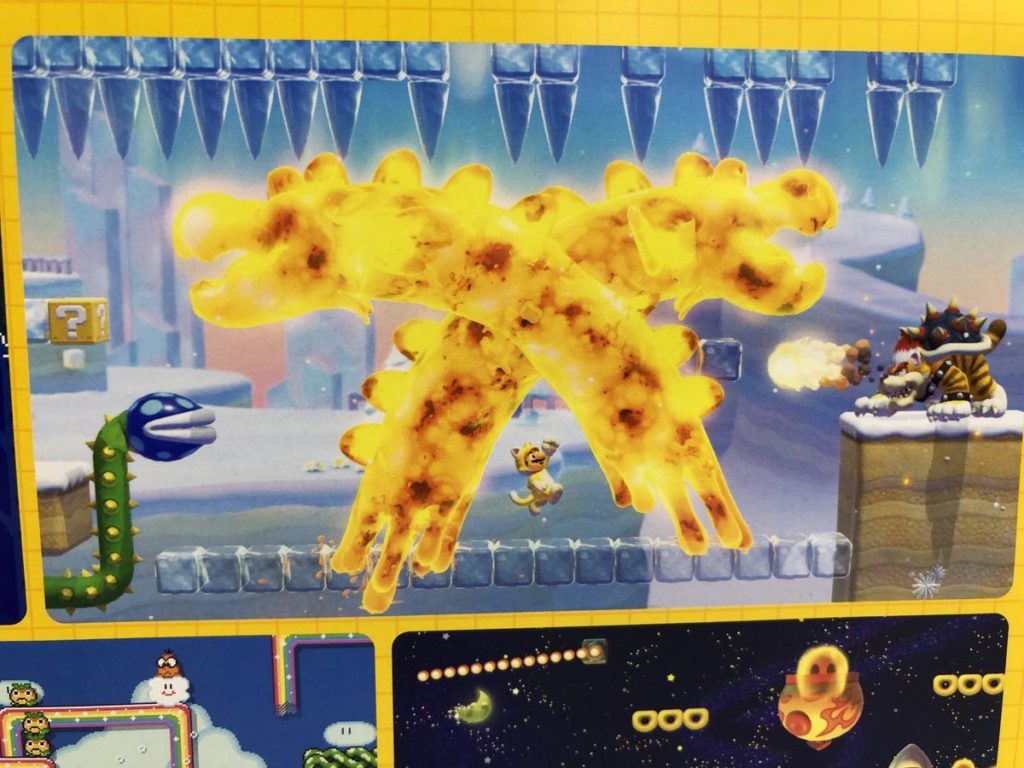 Why? Because it features two very unexpected additions. Meowser, and Charvaarghs.

Yep, the final boss of Super Mario 3D World is apparently a course element in this game now. Presumably created by giving Bowser a Super Bell, Bowser’s cat like form is now something you can use in your own levels too.

And the Charvaarghs aren’t bad too. These lava creatures act like the Blarggs in earlier titles, and charge across the screen with a menacing screech whenever you approach. They’re not the most common enemies in the franchise (only appearing in 3D World and Captain Toad Treasure Tracker), but they’re cool enemies to see return none the less.

What’s more, they also offer up a few questions about how they work in other styles too. Do they get replaced by Blarggs? Do they have their own redone sprites for earlier titles?

Who knows, but either way, you’ve got a fantastic new hazard that’ll make for some tense lava levels.

Finally, the screenshot is littered with icicles across the top of the screen. These fell in games like New Super Mario Bros Wii, and their location here indicates the same thing may be possible in Mario Maker too. So yeah, apparently falling spikes of various kinds are a thing in Super Mario Maker 2 as well.

So yeah, there’s some pretty nifty new features being shown off this in ad, from familiar foes to unique level mechanics and themes. It’s definitely proof that Super Mario Maker 2 has more to it than just slopes and a few new enemies!

But what do you think of it all? Are you happy to see these Meowser, Charvaarghs, icicles and enemies on ropes make their appearance in the game? What else has Nintendo got up their sleeve for this one?

Tell us what you think in a comment below or on social media today!