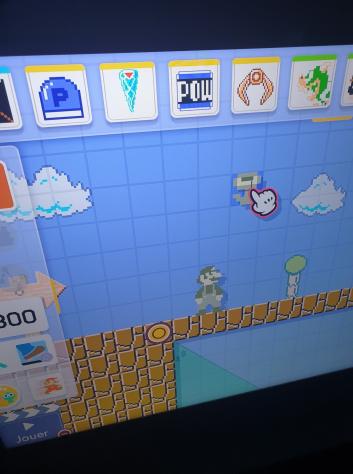 Well, this is a pleasant surprise isn’t it? Yep, as it turns out Super Mario Maker 2 has a few hidden power ups you can use, and one of those power ups is the Superball Flower from Super Mario Land 1!

It’s a pretty simple power effect wise (since hey, even in the original game it was mainly just a Fire Flower stand in), but it has a few neat effects none the less. Like say, turning Mario grey with a Game Boy esque palette. Or its projectiles having the ability to bounce on walls like a pinball, which lets you take out enemies above or below you as well as in front of you.

Here are some videos showing it in action:

Apparently it’s an item you unlock in the main story mode, with it and the Hammer being special story mode unlockables for the Super Mario Bros 1 and Super Mario 3D World styles respectively.

Unfortunately there’s no word on a Super Mario Land 1 theme at this point, but given the fact the extra game styles thing has an S in the label, that doesn’t seem completely outside of the realm of possibility now. And hey, there are some songs from Super Mario Land 1 in Mario Maker 2 at the moment. That’s something, right?

But what about you? What are your thoughts on the Superball Flower being in Super Mario Maker 2?

Are you happy to see it return, along with more Super Mario Land references?

Or do you wish there was a full style to go with it?

Tell us your thoughts on the matter (and more) in a comment below or on the Gaming Latest forums today!