Nyakuza Metro and Online Parties Announced For A Hat in Time 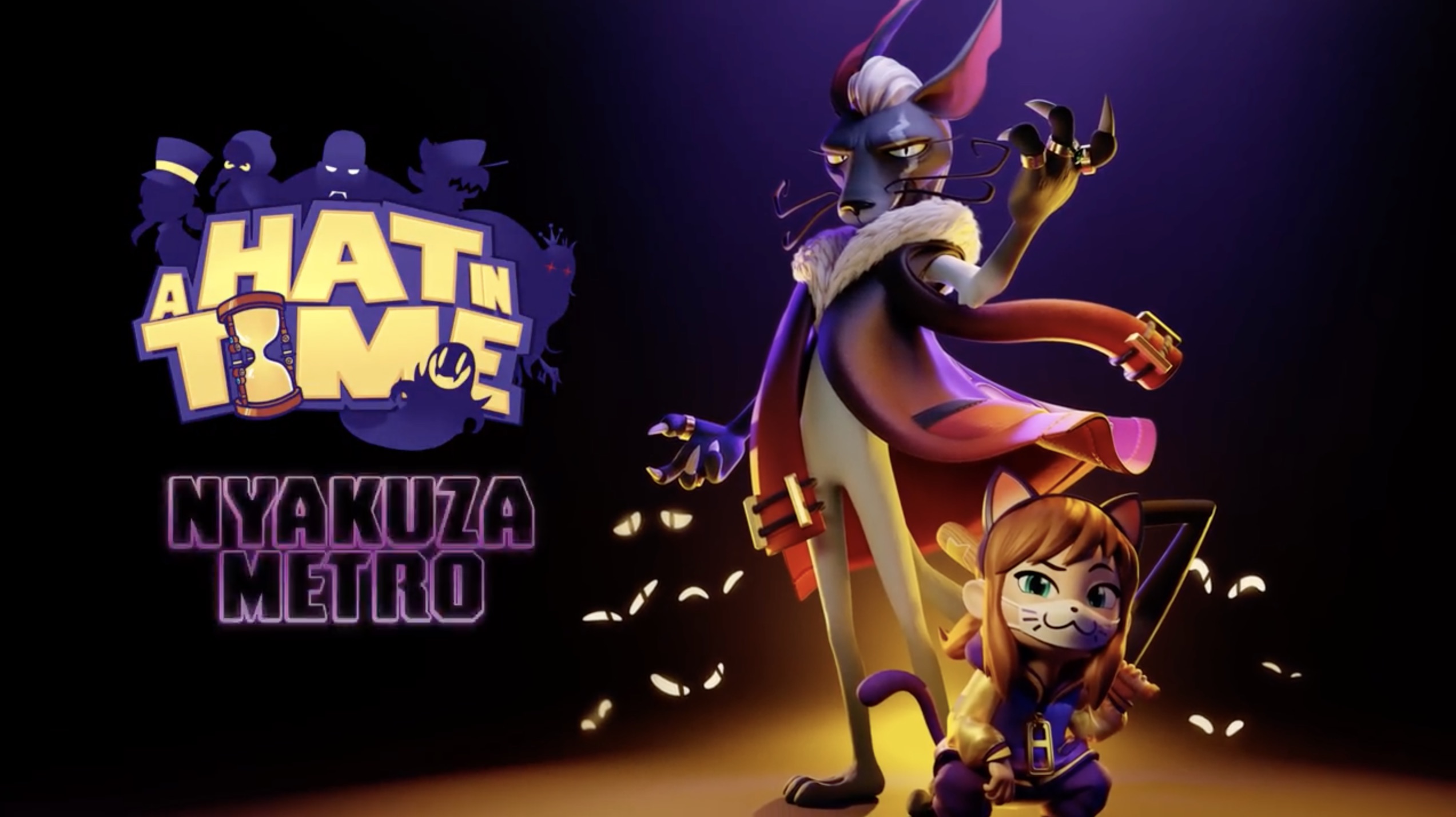 Since A Hat in Time’s launch in October 5th 2017, there have been quite a few interesting updates for the game. Some of these have included minor feature additions, some of them new outfits and bug fixes.

And some of them all new bonus chapters entirely. Like the last one, which offered a cruise ship themed stage called Seal the Deal. In that chapter, Hat Kid travelled on a cruise ship to the north pole in search of more time pieces, with her tasks being things like catering to the guests from across the game worlds and saving everything from a Titanic esque shipwreck. It was a neat enough level, albeit one that got some heat for being a tad too short in the greater scheme of things.

However, it wasn’t the only one promised for the game. No, in fact it was only the first of two extra chapters promised in the Kickstarter campaign, with a second bonus chapter being part of another stretch goal down the line.

And today, Gears for Breakfast finally revealed exactly what said chapter is all about. Namely, cats.

Yep, the next bonus chapter for A Hat in Time is the Nyakuza Metro, and it’s a cat themed city level where Hat Kid becomes a gangster in a cat gang led by a mysterious cat burglar. It’s a neat concept, and one where the feline theming was pushed to its very limits.

Seriously. The NPCs are all cats, the shops and buildings are littered with logos and posters featuring cat puns. Hell, even the trains themselves are being pulled by giant cats, meaning the entire city is built for, by and run by a legion of kitties.

It’s not a short experience this either. Oh no, while Seal the Deal only had three time pieces to collect, Nyakuza Metro has a whopping ten of them to find. That means it’s a lot closer to the main adventure’s areas in terms of content, and offers up an experience with a bit more meat on its bones this time around.

Which is pretty interesting, since the DLC doesn’t just end with the metro. No, just like how Seal the Deal also included Death Wish alongside the main chapter, this one has a massive online multiplayer tucked away inside too.

And it’s not some limited mini game type affair either. It’s not Banjo-Tooie’s multiplayer or Luigi’s Balloon World this time around.

No, instead it’s a full 50 player online co-op experience where you can explore any level you feel like and collect time pieces together. Yeah, you heard that right there. It’s a 50 player online multiplayer mode for a collectathon platformer!

That’s certainly something isn’t it?

Hell, given most of these games support at best two to four players at once, it may in fact make A Hat in Time the most multiplayer centric 3D platformer in history.

As well as the best spiritual successor/licensee Super Mario 64 Online has ever had. After all, this mode is basically Mario 64/Net64 Online done officially, complete with a team with a real budget and a ton of extra work put into player and character interactions.

It’s an extremely impressive extra mode, and one that’s incredible to see randomly added in a game like this.

Especially given that well, it’s still not the only addition outside of the new chapter.

No, just like before, extra outfits, time rifts and other content have been added as well. These include new filters (which can make the game look like a Virtual Boy title), a new sticker feature and much more besides.

And it’s all for a low price too. Namely, nothing.

Yep, for those who backed it on Kickstarter, this entire DLC pack (like Seal the Deal before it) is entirely free. Doubt you’ll ever get this much from EA or Activision any time soon!

Hell, we doubt you’d even see this much content sold for the non backer price either. That’s because for people who didn’t back the game on Kickstarter, the entire DLC pack will only put them back $6.99 in total.

So if you’re interested in it, check out the trailer below:

And get ready for the DLC when it launches on May 10th! It’s going to be great!