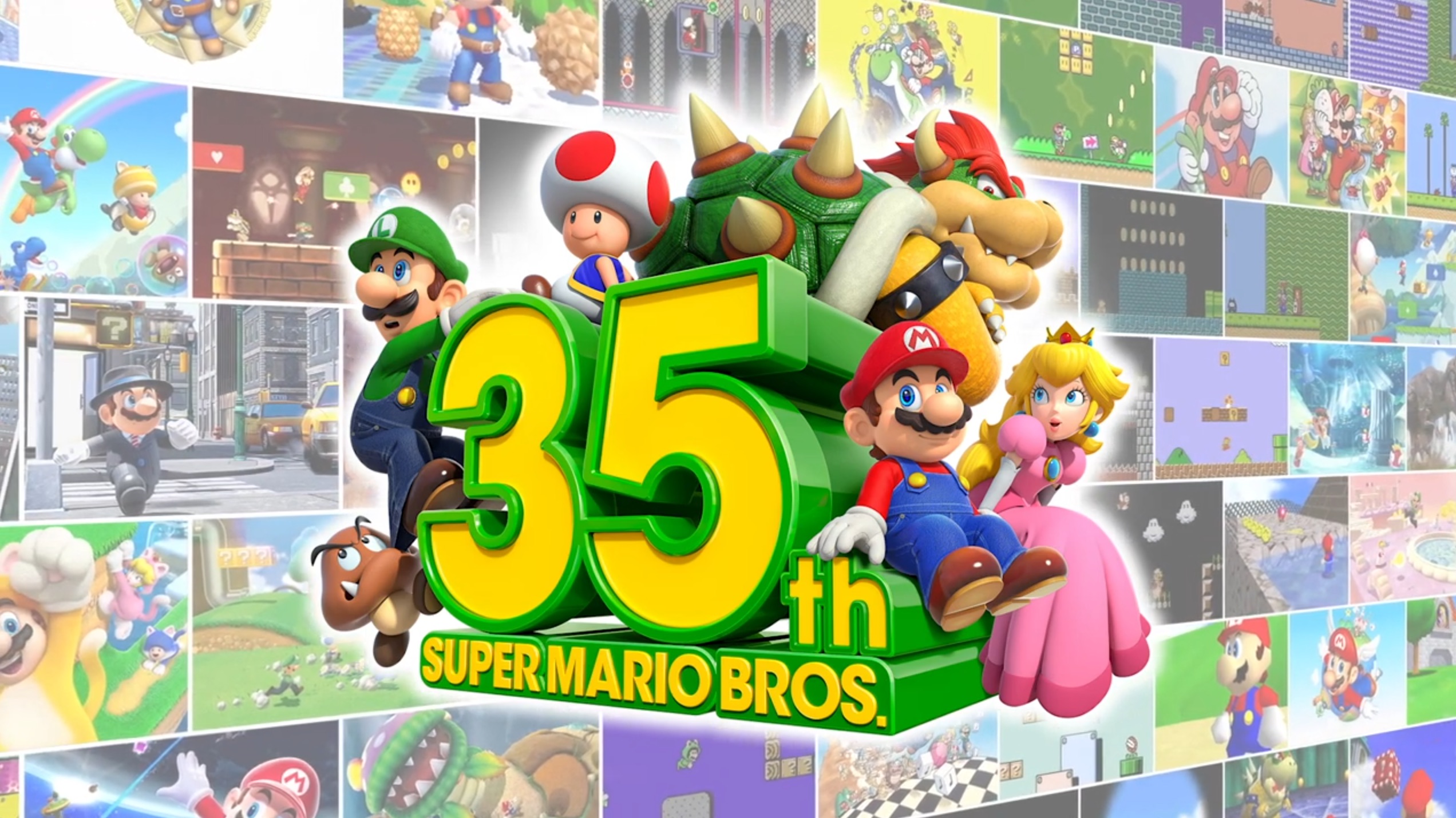 For many months now, there have been rumours about a 3D Mario All Stars Collection. Set to contain Super Mario 64, Sunshine and Galaxy, the collection has apparently been due to make an appearance in every Nintendo Direct in history, with all manner of people speculating that this was going to be the day Nintendo would officially announce it.

However, due to the COVID-19 situation, things haven’t exactly panned out that way. No, instead Nintendo’s released a few Partner Showcase Directs instead, with social media announcements for Nintendo games being limited to DLC and events for existing ones rather than brand new releases.

It’s been a disappointing situation, and one that made many fans doubt whether the collection existed at all.

Fortunately though, the wait is now finally over. Now Nintendo has finally revealed the 3D Mario All Stars collection, complete with upscaled and improved versions of Super Mario 64, Sunshine and Galaxy.

They’ve also revealed numerous other games too, including many new versions of the original Super Mario Bros, an unexpected Mario Kart game and another collection to say just a few.

So in this article, we’re gonna look at all of them, and see what they’ve all got in store. Here’s the Direct if you haven’t seen it already:

And below are our thoughts on every single game in it. You ready? Let’s do this!

Starting with a rather unexpected surprise hardware reveal that no one outside of Nintendo could have possibly seen happening. Namely, a new Game & Watch model that plays the original Super Mario Bros.

Yeah, you read that right. Game & Watch. You know, like those old LCD games Nintendo released decades ago?

Well there’s apparently going to be a new, special edition one that plays the original Super Mario Bros game. This also comes with Super Mario Bros 2 the Lost Levels, various secrets and easter eggs to discover, plus a variation of the old ‘Ball’ game featuring Mario as the juggler.

It’s pretty cool actually, and seems like quite a neat piece of gear for retro gamers and collectors.

Regardless, after that we get the other reveal people have been waiting for here. Namely, the reveal of that Super Mario 3D World port/remaster that’s been discussed for months now. For the most part, it’s as expected, at least where the main story is concerned. The characters are the same, the levels and layouts are the same, and the only real changes to the main adventure seem to be UI tweaks to make it work on the Switch.

However, don’t let that think this game doesn’t have anything up its sleeve. Oh no.

As the other part of the title suggests, Super Mario 3D World also comes with an extra mode called Bowser’s Fury. You know, like those side stories the Mario & Luigi remakes on 3DS.

And it’s this part of the game that has us really excited. Why? Well, look at it. Look at what we see on the title screen for said mode:

Yeah, it’s not just a short of a short, 3D World style level. It’s one of a giant open landscape filled with ominous statues and ruins. That’s nothing like anything you’d find in the original game, and looks more like a twisted, corrupted version of the Sand Kingdom from Odyssey than anything else.

Which in turn implies this side mode is not just going to be a few random extras ala Captain Toad. Instead, it implies it’ll be a whole extra story to experience with Bowser in a starring role. That’s awesome news for us, and may be one of the most exciting reveals of the lot.

After that, we then get another surprise that no one saw coming. 35 player competitive Super Mario Bros.

Yep, in something that looks kinda like a cross between Tetris 99 and Fall Guys in the world of the original game, the next reveal in the Direct is a modified version of Super Mario Bros 1 where you try and remain the last one standing by racing through levels and defeating enemies. It’s a neat setup, and one which we’re guessing will be extremely popular, especially given the game’s being made available to Nintendo Switch Online members for free.

Additionally, it also answers the question of why Super Mario Bros Battle Royale was shut down last year. As it turns out, like AM2R before it, Nintendo was indeed working on an official version.

As for the My Nintendo Missions… well they’re something. You can apparently do various tasks on Nintendo’s site, with the rewards being things like merchandise and desktop/phone wallpapers.

Nothing too special, but neat enough for those who enjoy that kind of thing.

The Summer Festival Tour is wrapping up in #MarioKartTour. Starting Sep 8, 11 PM PT, get ready for some nostalgia with Mario (SNES) and Donkey Kong Jr. (SNES) in the #SuperMarioKart Tour! #SuperMario35 pic.twitter.com/KUvZAXuXib

Mario Kart Tour on the other hand gets two new unexpected characters; Donkey Kong Jr, and Mario, both of whom sport their appearances from the original Super Mario Kart.

It’s a pretty neat addition, and one we’re sure most Mario Kart Tour fans will be happy to see.

There are also online competitions for Super Smash Bros Ultimate and Splatoon 2 based on the Mario series too. There’s not much to say about either of them, but they’re sure to be fun for fans of said games nonetheless. 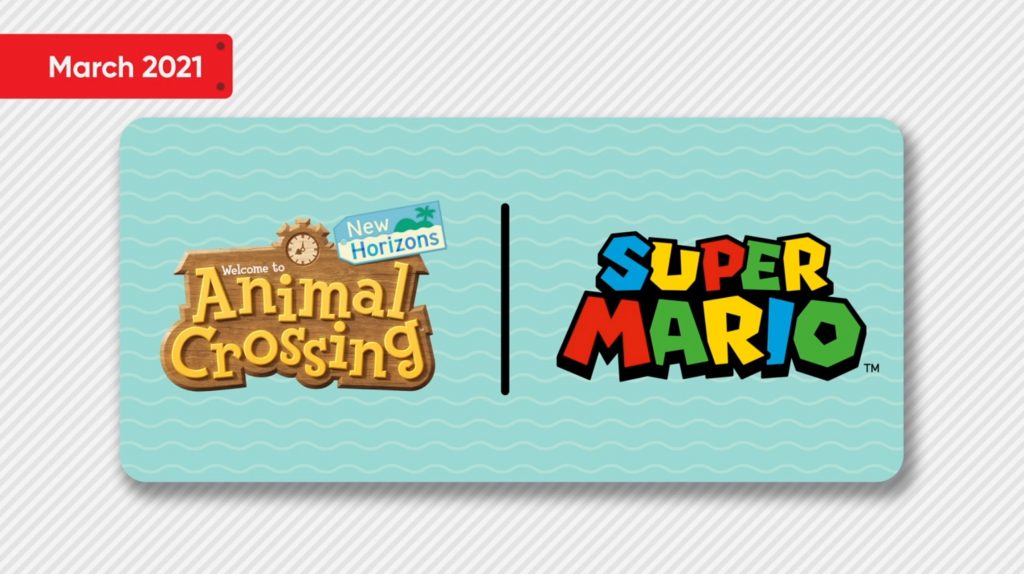 Yet while the Smash Bros Ultimate and Splatoon 2 crossovers are pretty small scale, the one for Animal Crossing New Horizons seems quite a bit more interesting. Why? Because as the title says, Mario related furniture is being added to the game too.

That’s pretty cool, and it makes us wonder what other Nintendo games might get Animal Crossing furniture and events in the foreseeable future. Maybe Breath of the Wild 2 or Metroid Prime 4?

What we do know however is that Nintendo have some super creative ideas, since the next reveal in the Direct is a very unusual one indeed.

Because it merges physical toys with video games in a way that Nintendo Labo and LEGO Super Mario could only dream of. Put simply, it’s real life Mario Kart as controlled by a Nintendo Switch.

Yeah, we’re not making that up. You literally get small remote controlled cars that you can drive around your living room (or anywhere else), and a game which lets you control said cars through the Switch console like they’re in a real Mario Kart tournament. It’s an insanely creative idea, and one which we can actually see quite a few adult fans buying as well.

What’s more, it also technically provides something else the Mario Kart franchise has needed for a while now.

Sure, it’s not technically what you’d think of when you hear the term. But hear us out here. When you set this up, you have the ability to place the checkpoint gates anywhere you like. These gates seem to control which way the track goes.

Hence anyone who buys this now has the ability to design whatever level they like for a Mario Kart game, assuming they can build it out in real life. So we can almost guarantee that at least a few dedicated fans are going to physically build entire miniature race tracks in their back garden, and be able to create Nintendo style courses as real life dioramas.

It’s going to be a fun one to watch to say the least! 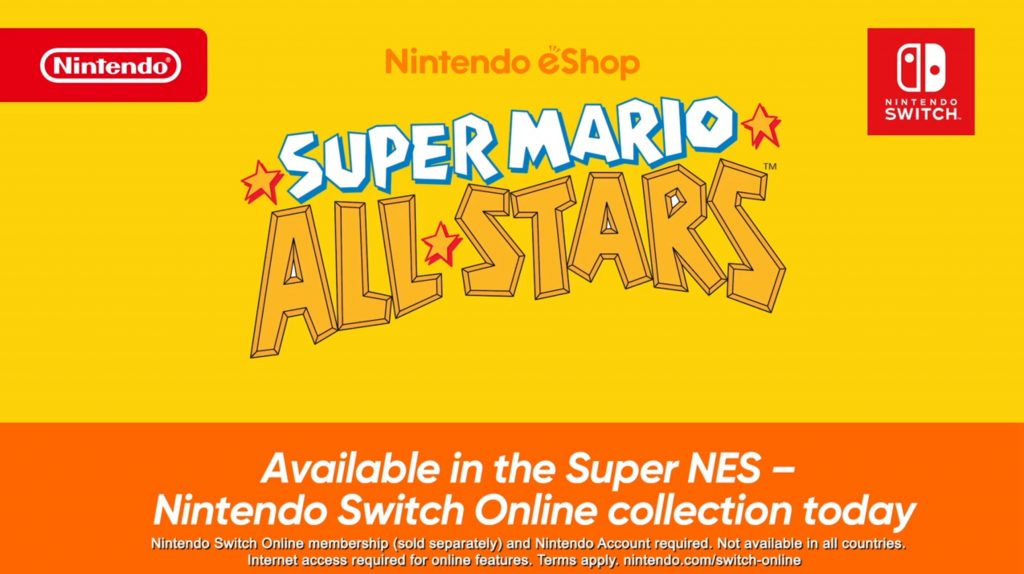 Meanwhile, back in the realm of traditional video games, we’ve got Super Mario All Stars for the Nintendo Switch.

And while this one is indeed the original games without any changes, it’s at least a better deal than the Wii equivalent was. Why?

They won’t exactly have to wait very long either, since these games are coming to the service later today.

So yeah, if you want to play Super Mario All Stars on Switch, just wait a bit and you should be able to play it for free in a matter of hours.

Finally, we get to the big one. The 3D Mario All Stars Collection. The game that’s caused so much internet drama for months now.

Which turns out to be a couple of ports with minimal changes. Yeah it now fits the Switch screen size better and it’s technically been uprezzed a bit, but it’s the same old games as before without any real changes so to speak of.

That’s pretty disappointing if you ask us, especially given the sheer amount of love things like the original Super Mario All Stars and Super Mario 64 DS got back in the day. Those got completely overhauled from the ground up to fit current day hardware, while these haven’t even gotten the slightest paint job touch up.

Ah well, the music player is pretty nice we suppose. And hey, as people have pointed out on our Discord server, not everyone did get to experience these games back in the day either. So for those folks, they can at least enjoy playing games like Super Mario 64 and Super Mario Sunshine for the first time in their lives. 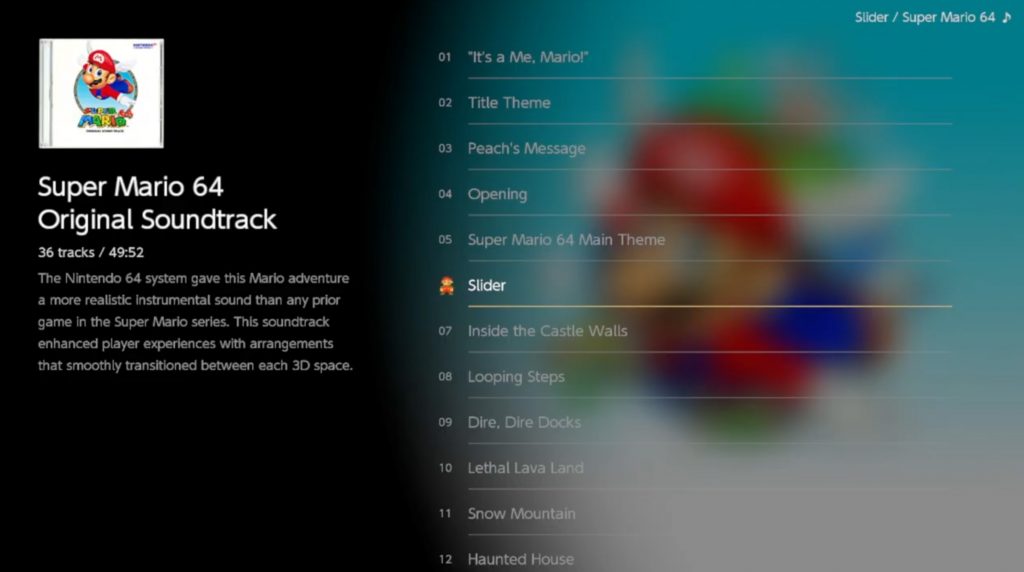 While the rest of us can have a bit of a debate about what happened to Super Mario Land 2 in the Mario history montage at the end of the video.

Yeah, for whatever reason it seems to be completely absent in this one, with the timeline going straight from Super Mario World to Super Mario 64 instead.

It’s a super weird omission really, and one which makes even less sense when you realise the original Super Mario Land is included in the lineup. Guess whoever was editing the montage had a bit of a mental slip up with this one…

Either way, that’s everything from the Mario 35th Anniversary Direct. You’ve got some ports and remakes of older games with varying levels of new features, an unexpected Mario Kart experience, plus Mario related events for all kinds of Nintendo games.

So what did you think about it all?

Are you happy with Super Mario 3D All Stars and what it’s got in store? What do you expect Bowser’s Fury will be in the 3D World remake? Is Mario Kart Live: Home Circuit the next step for toys to life video games?

Tell us your thoughts on the matter in the comments below, on the Gaming Latest forums, or over on our not so new Discord server today!