When it comes to concept art, Super Mario Odyssey is hardly lacking. Indeed, with a full artbook released by Dark Horse Comics to promote the game, the series has concepts for pretty much everything and anything, ranging from Bowser in disguises to early boss designs to kingdoms entirely unlike those from the final game.

It’s one of the most well documented games of all time, and one which is incredible to read about on sites like Mario Wiki and The Cutting Room Floor as a result.

Yet did you know that’s just the tip of the iceberg? Yep, as it turns out, there’s even more interesting artwork of the game in Nintendo’s artwork, including pictures of unseen kingdom designs, characters and more. That’s according to leaker Nikki anyway, who seemingly snuck inside a Nintendo meeting to bring us all kinds of pictures from the game’s development. Here’s a gallery of them to see them for yourself:

As you can see, they look pretty damn awesome really, with all kinds of interesting things to take note of.

So, let’s analyse it a bit shall we? Let’s see exactly what these intriguing screenshots and concept art pics have to offer!

Starting with the very first one, where Mario is shown encountering a very low poly musician! Yep, it seems like the musicians from New Donk City might have been meant for more kingdoms at one point, and had some very… unsettling designs earlier in the game’s development. Like, you think the final ones look uncanny? Try these doll like versions instead.

As for the background? Well, we’re not sure if it’s just been used as an example, but it seems mostly the same as the finished game design wise. Presumably the structure of the Sand Kingdom was already worked out by this point in development, and the NPCs/enemies were some of the later models to get properly designed.

Onto the next picture then. And this one seems to be a gallery of pictures showing various other kingdoms and concepts.

With the first one being another Sand Kingdom pic. This one doesn’t have much to show, since it’s just highlighting the poison pond area where you ride into the ruins on a Jaxi. Neat, but pretty much the same as the final game.

But that’s not the case in the next screenshot. No, that one shows the capture list, and it’s a… tad different to the one we’re used to. Have a quick comparison:

As you can see, the early version has a completely different style overall. The icons are circular instead of rounded, they use screenshots with backgrounds rather than transparent concept art, and even the icons that do represent captures found in the final game are totally unlike those we actually got.

Which brings us to the other obvious difference. While we can’t see what each character is very clearly, it’s 100% certain that the species we were going to capture were nothing like those in the final game. Oh sure, we can make out some icons on both. Frogs, Paragoombas, Hammer/Fire Bros, Uproots and Yoshi were going to be capturable critters in all versions of the game…

Yet many others don’t match the final game at all. Like, what even is that white thing next to the Pokio here? Or to the left of the Lakitu on the top row? It’s too blurry to be sure, but they look nothing like any of the icons used in the final game, and seem to represent mechanics or gimmicks cut from said version.

There’s also some dialogue shown to the right of this picture too. Based on the background it’s with a character found in the Lake Kingdom, but the only person with a similar description is Rango, and he looks nothing like the character shown there. So either this is one of his earlier incarnations, or another Broodal took his place earlier in development.

Onto the bottom row now. With the first picture showing the Odyssey landing in a sandy area in an unknown kingdom. Based on the sand and the Power Moon colour it’s presumably a version of the Seaside Kingdom, but again, it doesn’t match the area in the final game at all.

We also get a picture of the Ruined Dragon too. It’s found in a location that looks much like the final version of the Ruined Kingdom, and does at least have a similar design, but the differences are vast nonetheless. The speech prompt appears on the bottom right, its head looks boxy and unfinished and its wings… well its wings are completely down too.

Finally the picture also shows Mario in a secret level too. This one looks more complex than the bonus areas in the released game, and gives us Mario Sunshine vibes in all the most obvious ways.

Either way, onto picture 3 now! And this one… actually looks really cool. Indeed, based on what we’ve seen of the artwork here, it’s got beautiful handdrawn concepts for pretty much every kingdom in the game!

And we can identify one of them right away. That one’s a picture of the Sand Kingdom found in the Art of Super Mario Odyssey book, which you can see at full size here: 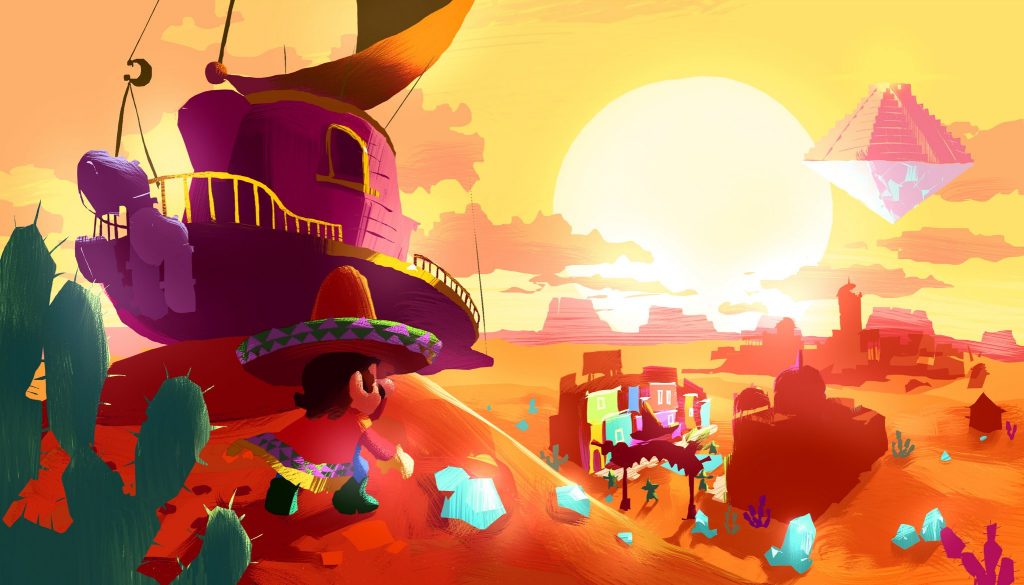 But we’re not sure lucky with the others. While we do have concept art of the Metro Kingdom and Seaside Kingdom, they look nothing like the pictures here.

Meanwhile, the Wooded Kingdom, Snow Kingdom and Luncheon Kingdom and the map area have no similar concept art at all. So all we get of those beautiful pictures are these tiny thumbnails. Damnit Nintendo…

Finally, we get a design doc for various elements from the Sand Kingdom too. These include the Moe-Eyes, Bullet Bills, Chinchos and various others. That’s pretty cool on its own, but it’s not the main attraction.

No, the main attraction is at the top of the screen. Why? Because it shows that these pictures were taken from a Zoom call held by Nintendo. One which is (according to the folks in the Twitter comments) meant for recruitment purposes. So yeah, seems like we’ve got leakers attending virtual Nintendo meetings and calls now!

Either way, there’s some really cool artwork here, and it’s very interesting to see how Super Mario Odyssey has progressed through its development based on that. Here’s hoping Nintendo releases some of the other stuff in higher quality in an art book further down the line!