A couple of months ago, a couple of pages from a book called The Art of Super Mario Odyssey were posted online. These featured everything from an official Bowsette to a cartoony version of New Donk City, and gave a ton of interesting insights into the changes the game went through in its development.

Yet as interesting as that selection was, it turns out it was only the tip of the iceberg where ‘beta’ content and unused ideas was concerned. That’s because a Twitter user by the name of Akf̶a̧m̡ilyhom̴e̴ bought the book recently, and the pages he’s been posting online show even more interesting ideas from Odyssey’s development cycle. Like say, these early concepts for Cappy, showing even more possibilities for his design: 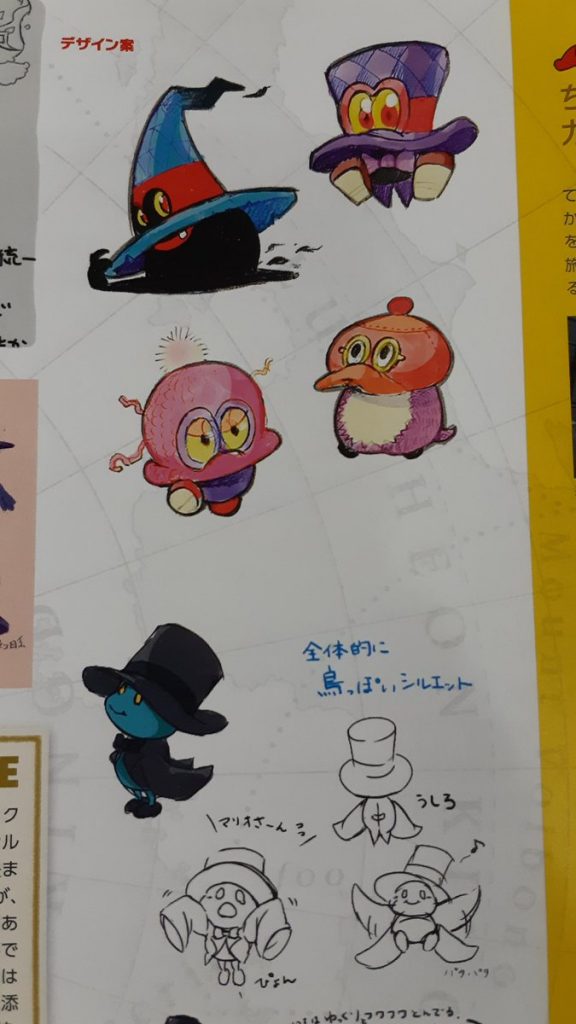 They’re pretty cute really, especially the crow like one in the bottom left and the penguin/mouse esques ones above it.

And it seems Cappy and the Bonnetors weren’t the only ones to get a design overhaul either. No, the citizens of Bubblaine (aka the Seaside Kingdom) went through a fair number of changes in their designs too, ranging from regal squids to Mario & Luigi Dream Team inspired sea snail people: 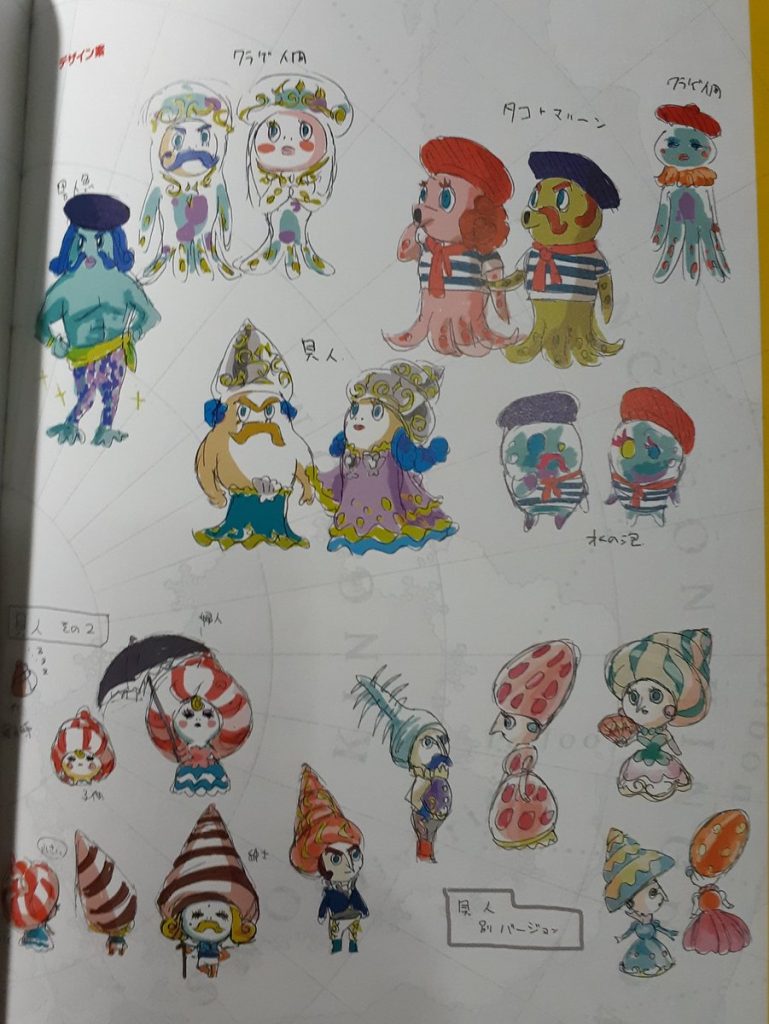 Same goes for the New Donk City NPCs as well. Those guys went through literally hundreds of redesigns over the course of the game’s development, with some of the older variations taking a fair bit of inspiration from Stanley and other characters of the 8-bit arcade era. 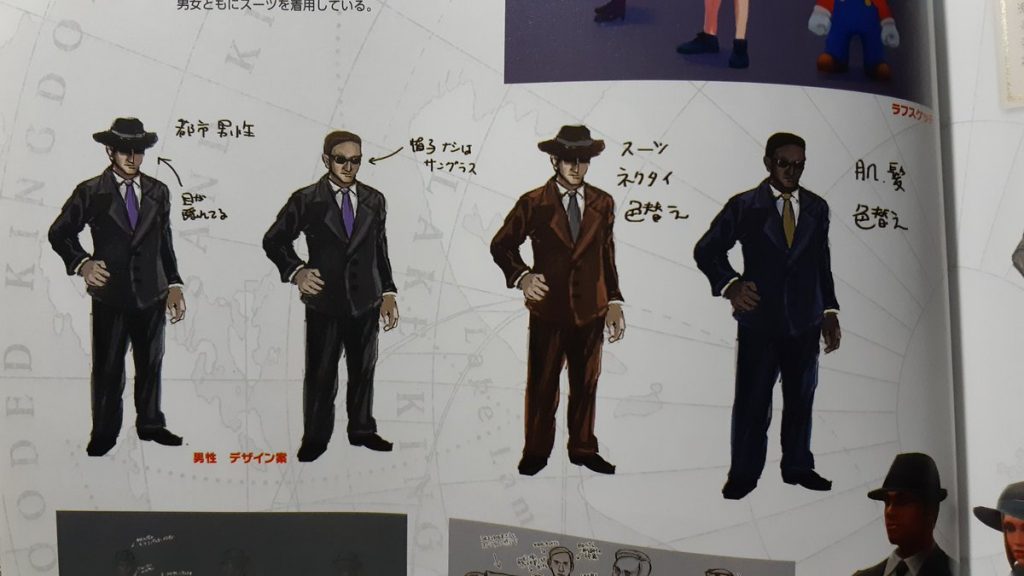 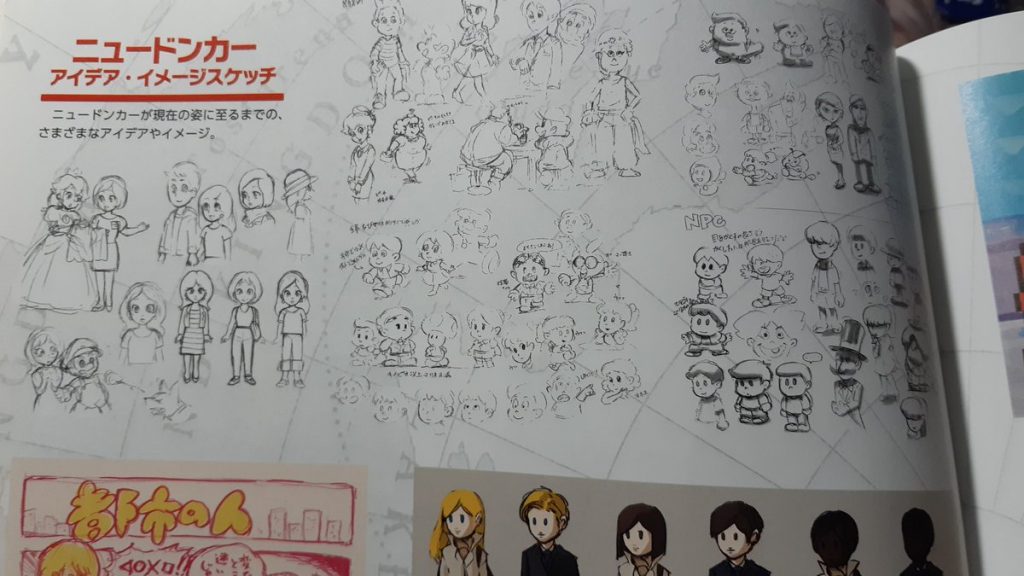 Which us make us wonder whether the game may have worked out better had they stuck with the older variations. After all, the current citizens of Bubblaine look a bit plain all things considered, and the realistic humans in New Donk City seem extremely jarring in a Mario game like this. Perhaps the older ones would have fit the universe better, and given the game even more charm?

It’s hard to tell. Regardless though, what definitely would have worked better are the characters in this artwork: 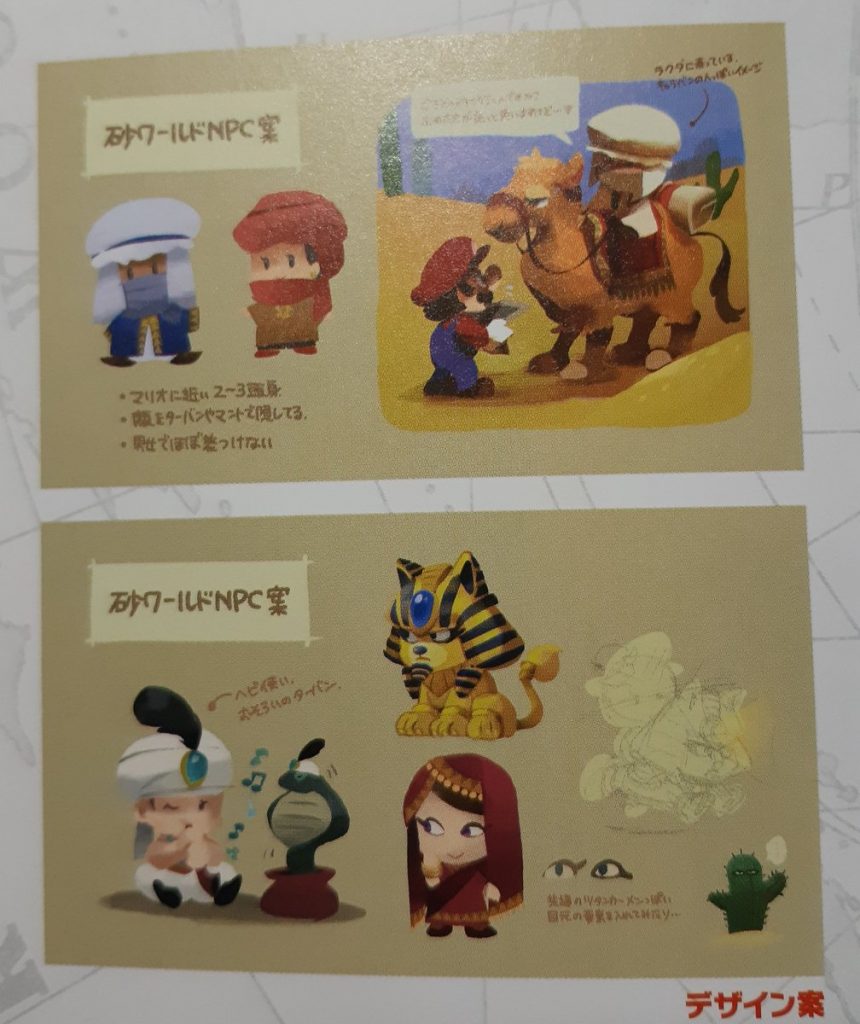 Because they seem to be inspired by the original cast for Doki Doki Panic, aka the game that became Super Mario Bros 2. To see them in Odyssey would have been a fantastic call back to the 80s, and nicely tied Doki Doki Panic into the Mario universe, confirming its status as a Mario title in all but name.

Still, I guess the theme for the world worked against that idea. Remember, Odyssey’s desert world isn’t your typical Mario desert world, it’s a Central American one with a Day of the Dead style populace. The Arabian characters wouldn’t have fit well in this area, and given the choice between ‘Mexico’ and ‘Middle East’ for their desert region’s inspiration, it’s likely Nintendo just thought the former made for a more interesting level.

But there’s no reason certain other ideas shown in this book couldn’t have been used in the game. Like these cats, which were clearly meant to be a part of New Donk City’s landscape at some point in development: 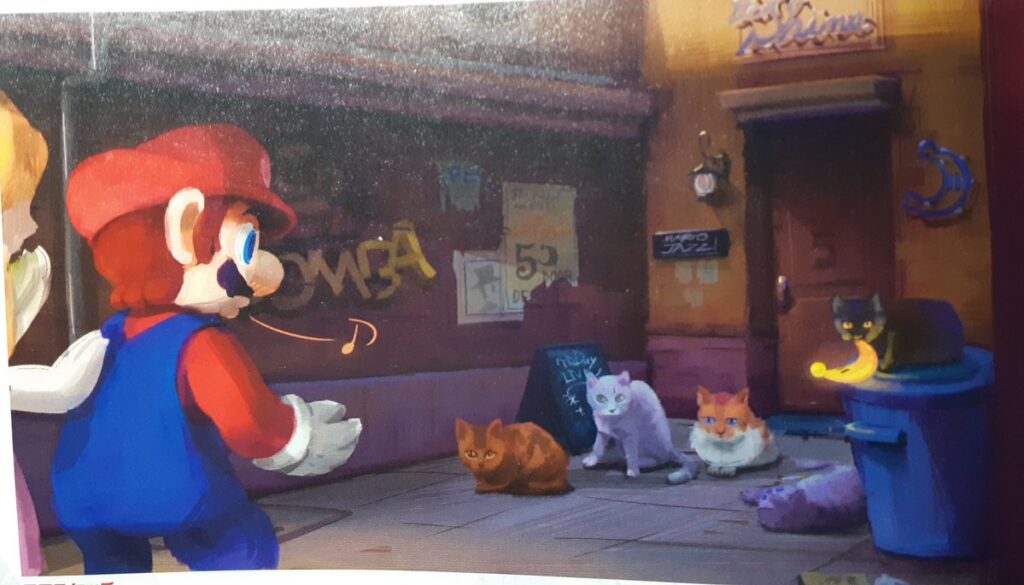 Bit disappointing to see those didn’t make it in really. Dogs are already present in many kingdoms (and the Odyssey itself in the postgame), so a few cats in the alleys of New Donk City wouldn’t have gone amiss here. Nor would Bowser’s trenchcoated design for the same area: 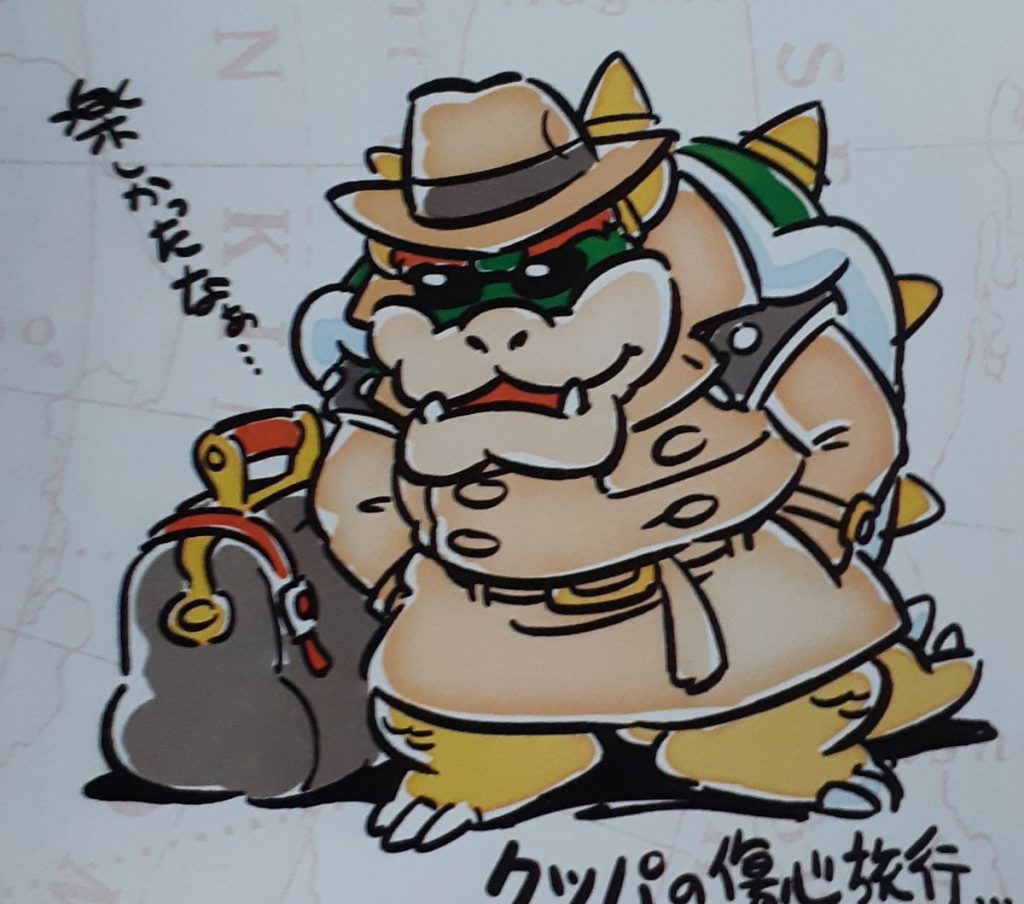 Indeed, can you imagine if Bowser had a different design for each world? That would have been a great idea to include here, and (given Peach’s tendency to dress for each kingdom she visits in her postgame tour with Tiara), would have worked wonders for the globetrotting aesthetic this game was going for. Imagine Bowser wearing samurai armour in his own kingdom, or dressing like a Communist leader/Russian tsar in the Snow Kingdom! That would have been awesome.

The same thing could have applied to the Broodals too. Okay, that’s not in the plans for the game, but come on. You know it’d be neat to see them getting in the tourist spirit too. You could have Spewart dressed as an explorer and chef for his fights in the Wooded and Luncheon Kingdom, or Harriet as a pharaoh in the Sand Kingdom. Small touches, but they’d make the boss battles stand out a bit more none the less.

And talking of outfits and themes, it seems the whole wedding thing was gonna be a bit more prominent in early versions of the game too. Like how the Goombas are wearing spiffy bow ties in this picture:

Along with the whole wedding car thing in general. Yeah, seems like Bowser was gonna get another 3D World style vehicle for this game, except with the ability to fly like a plane. It’s a neat concept, and the idea of a frazzled Kamek being stuck as the chauffer just makes it even better.

But the characters weren’t the only things to go through changes here. No, the kingdoms had a few neat concepts for them too. Like this version of the Mushroom Kingdom:

Which in turn, looks a million times more interesting than the actual version in the game. Forget a small plaza with the Odyssey and a few Toad space ships, this has an actual Toad Town with Paper Mario style houses for them to live in! What happened Nintendo? Why did you move away from this to a mostly empty field?

It makes no sense. Nor do your changes to the Cloud Kingdom either, which went from a full blown kingdom with Lakitu clouds to ride and mountains to explore:

To the simple boss arena found in the final game. Ah well, maybe it’ll make it into Odyssey 2, or a DLC expansion of some kind. 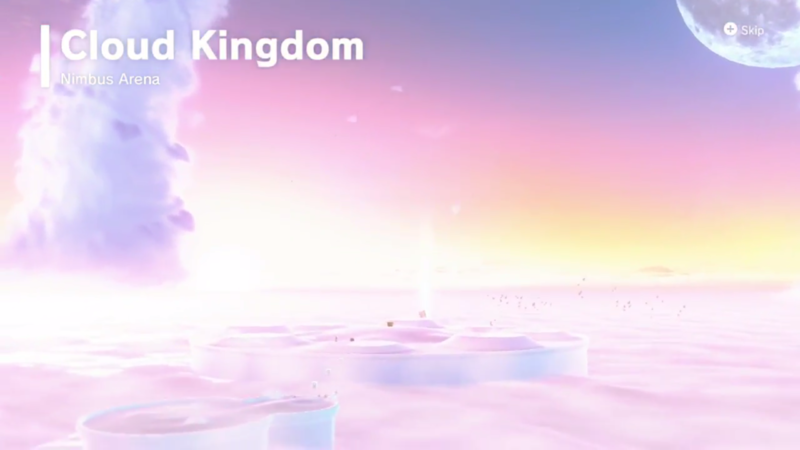 Along with the earlier designs for the Ruined Dragon. Cause this guy… well he actually went through a ton of changes of his own, all of which made him look hilariously out of place in the game. Seriously, what even is that last design? That’s less dragon and more ‘Japanese mythological dragon god of evil’. Or if Kefka from Final Fantasy VI tried to capture the thing with his own version of Cappy.

Either way, I hope they use it again at some point. It wouldn’t fit Crumbleden’s style in Odyssey as it stands now, but it would be a nice surprise to include in a sequel’s story, especially if its role came from as out of left field as the Ruined Dragon’s was in the original game.

However, concept art doesn’t always mean ‘beta’ elements. No, as the Masterworks for Breath of the Wild showed us earlier, it can also feature explanations for things hinted at in the game’s story, like the route the Champion’s took to their Divine Beasts or Link’s path to the Shrine of Resurrection in the backstory.

And there’s also true of the Odyssey book too. Why? Because as it turns out, it includes an… interesting explanation of the random block of meat you possess in the Luncheon Kingdom.

Namely, the one shown in the picture below: 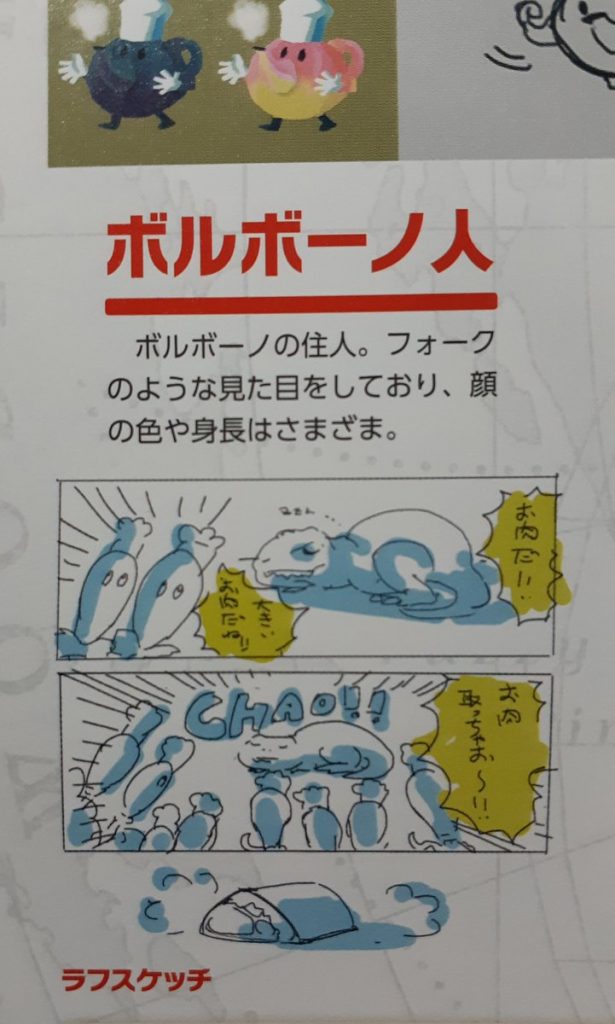 Yep, as it turns out, those Volbonians are actually pretty good at fighting monsters too, and managed to take down a T-Rex with their combat prowess. So if you’re ever out in the Deep Woods sneaking around the T-Rex there, just think back and remember that somehow, a bunch of sentient forks managed to kill and cook one. Wait, who’s the badass here again?

And why the hell didn’t they deal with Cookatiel themselves anyway? It’s not like taking down that giant chicken would be any harder than fighting a T-Rex…

Ah well, that’s NPC apathy for you. Willing to go the extra mile when it’s convenient, willing to cower in fear like idiots whenever they know the player can do everything for them.

Still, that’s it for the concept art. As Akf̶a̧m̡ilyhom̴e̴ says himself, you’ve gotta leave some reason to buy the book, and posting every page from the thing won’t provide that. So if you’re interested in the rest of the artwork there, buy it yourself from a site like PlayAsia

Then tell us what you think of these intriguing concepts in a comment or on social media today!