Damn, this E3 has been quite the shock for Nintendo fans hasn’t it? From Banjo-Kazooie in Smash Bros Ultimate to Zelda Breath of the Wild getting a sequel, it seems the E3 and Direct has been chock a block full of fantastic reveals and announcements.

But it’s obviously not just new games and shock reveals in this E3. No, already announced games got new trailers and information too. 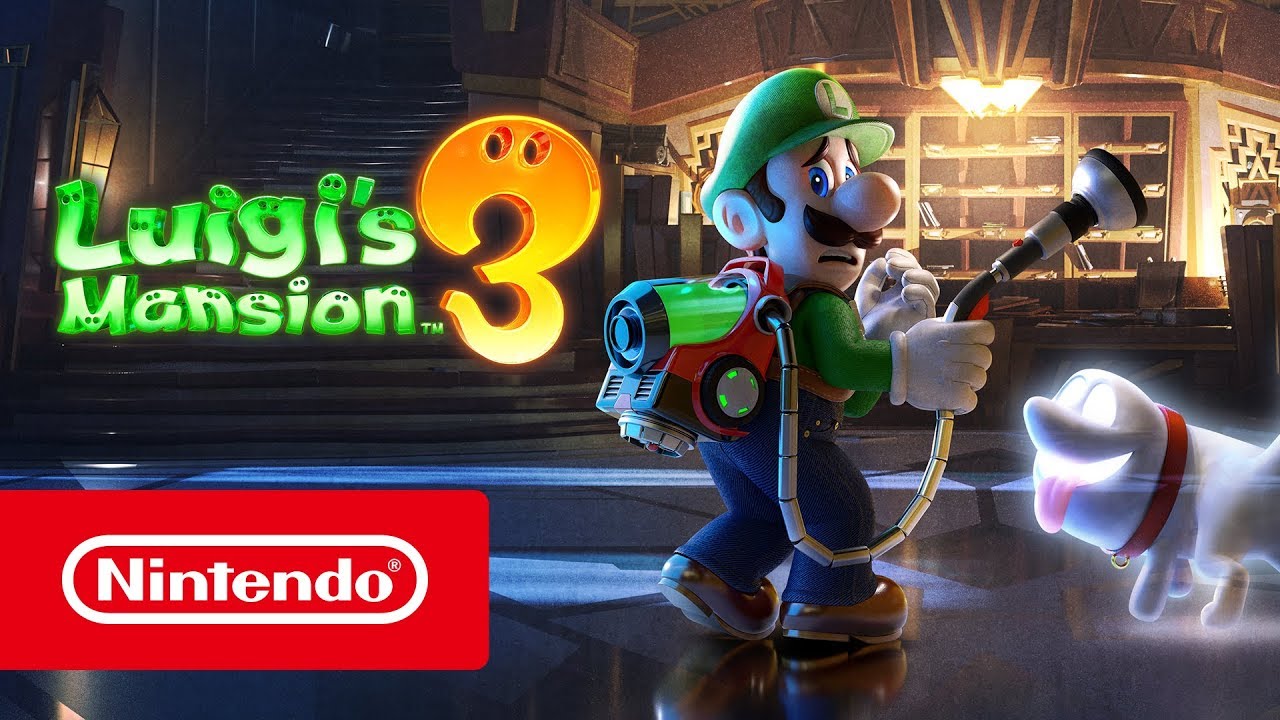 Right off the bat, you’ll notice it’s been… made a bit more interesting than in the previous video. Oh sure, the style is still a tad cartoony compared to the first game’s one, but it’s been cleaned up, and a lot more variety has been shown here too.

Like the various themed rooms in the hotel. Yeah, like in Dark Moon, it seems various parts of the hotel will have different themes behind them, from a spooky castle like basement to a plant filled greenhouse and even a movie studio. It’s quite impressive how much got fit in here, and it works pretty well to liven up an otherwise one note location. 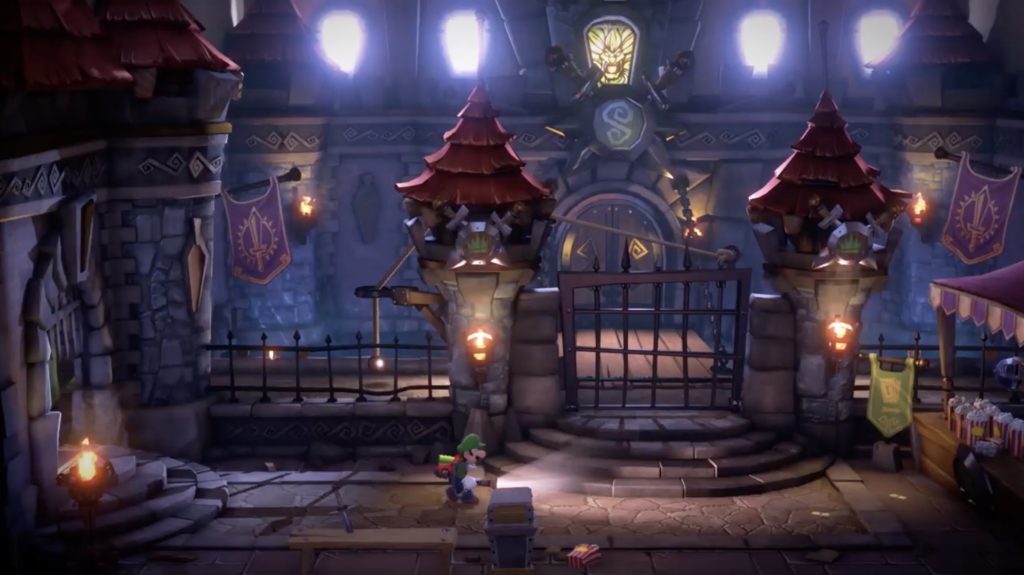 Seems each bit of the hotel has its own theme 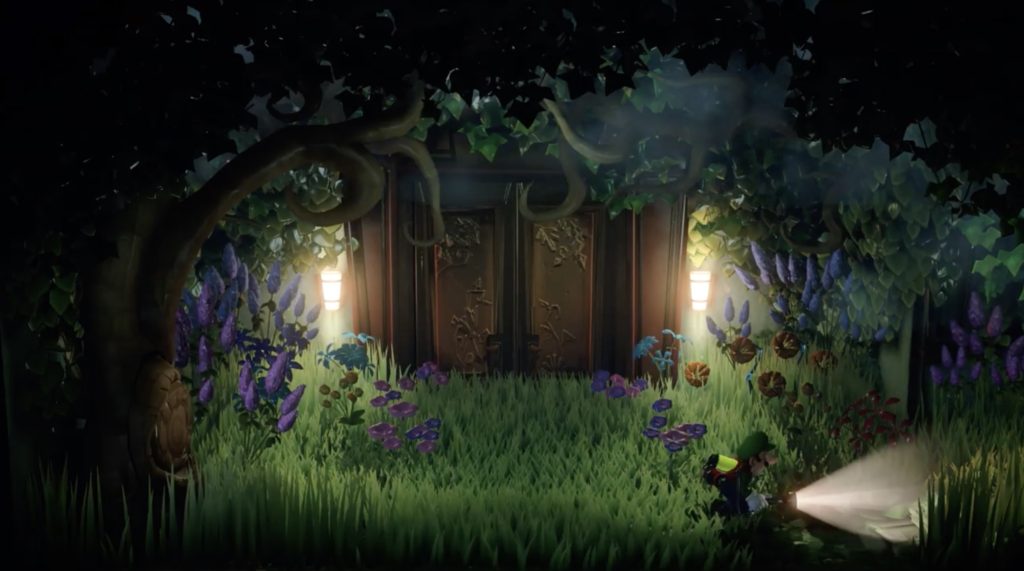 This part of the hotel looks a bit overgrown 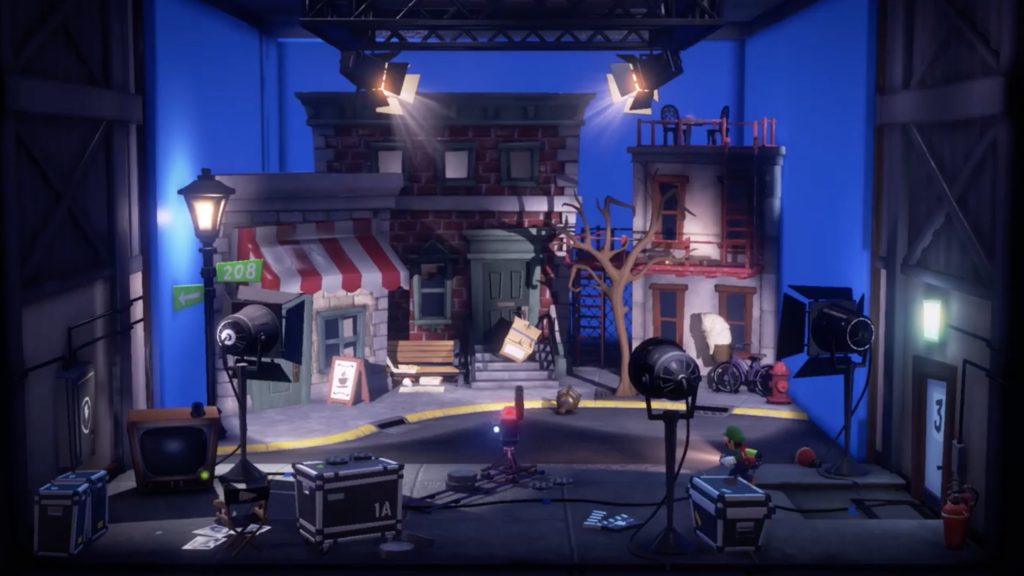 And a film set is an explorable part of the hotel too.

Yet that’s not all that livens it up here.

No, it seems the ghost variety is actually quite good this time front! In fact, it may even seem like we have the return of portrait ghosts again, or at least ghosts with similar designs and personalities. That’s a huge step forward from Dark Moon, and with the likes of the vampire esque receptionist/bellhop, the new security guard and the robot controlling monstrosity seen in one of the boss battles, it appears like the days of fighting Possessors at the end of each area have come to a close. 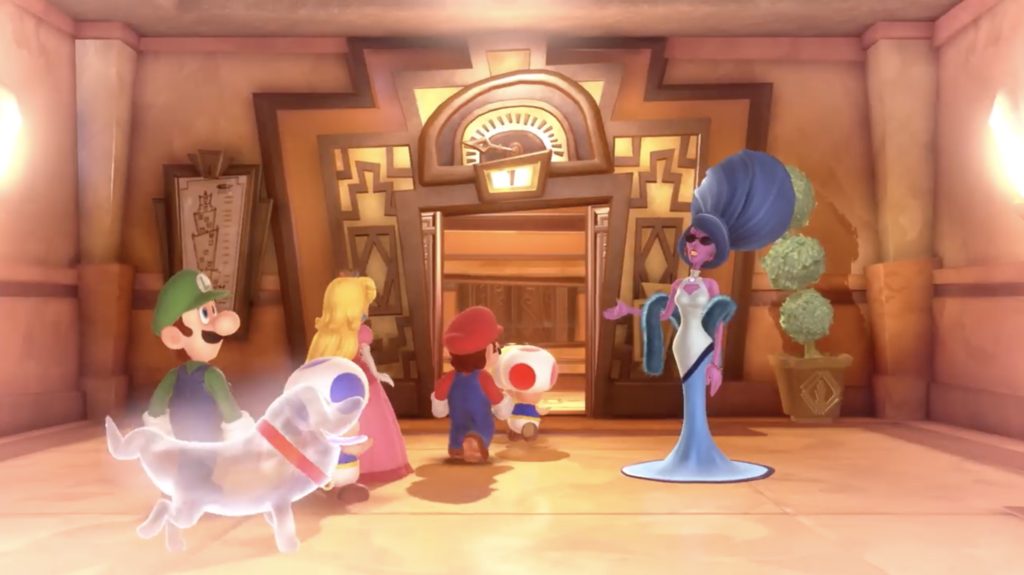 Something about this receptionist/bellhop just screams ‘ghost boss’ 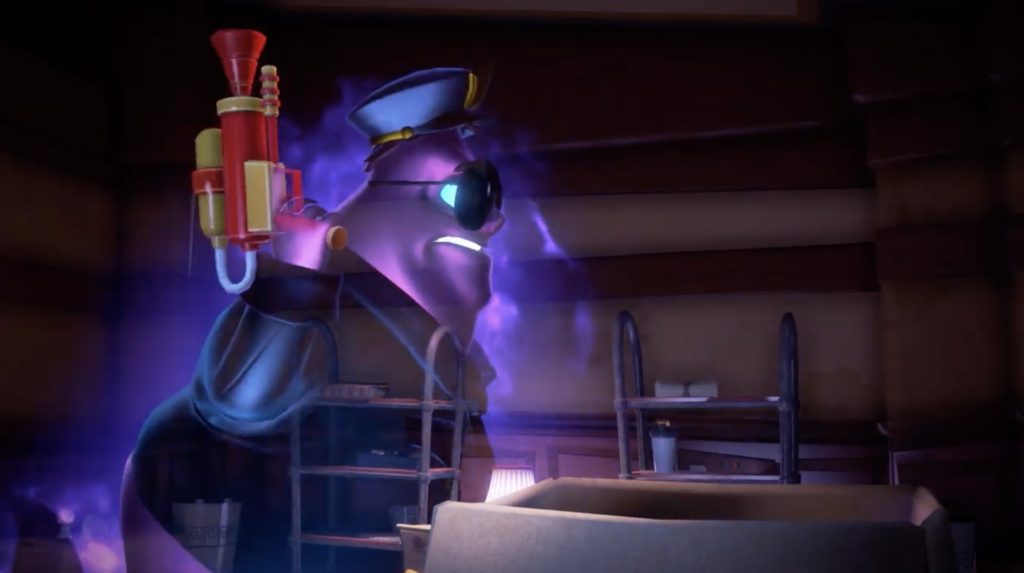 A ghostly security guard will be faced at some point 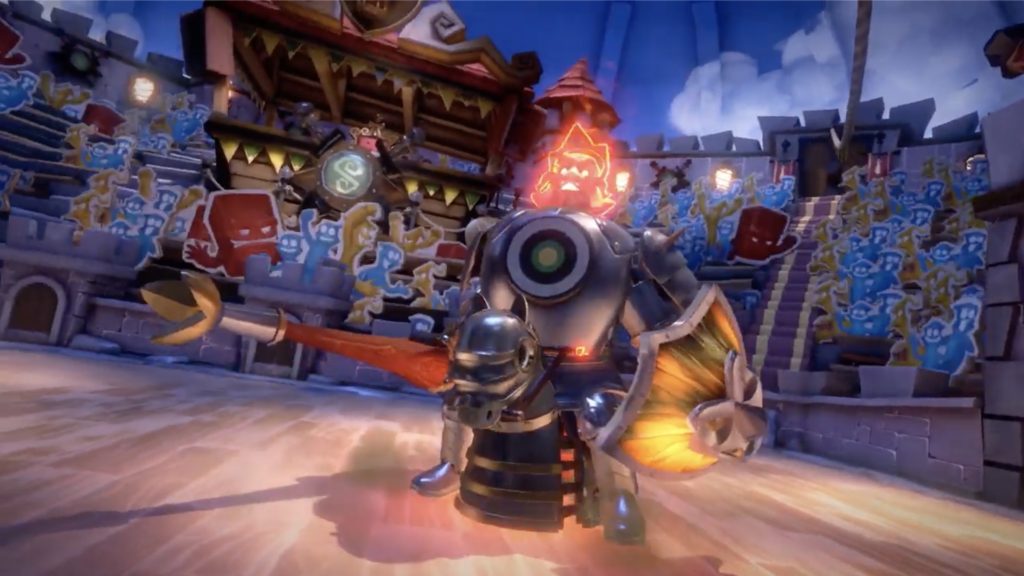 As will this King Arthur esque knight 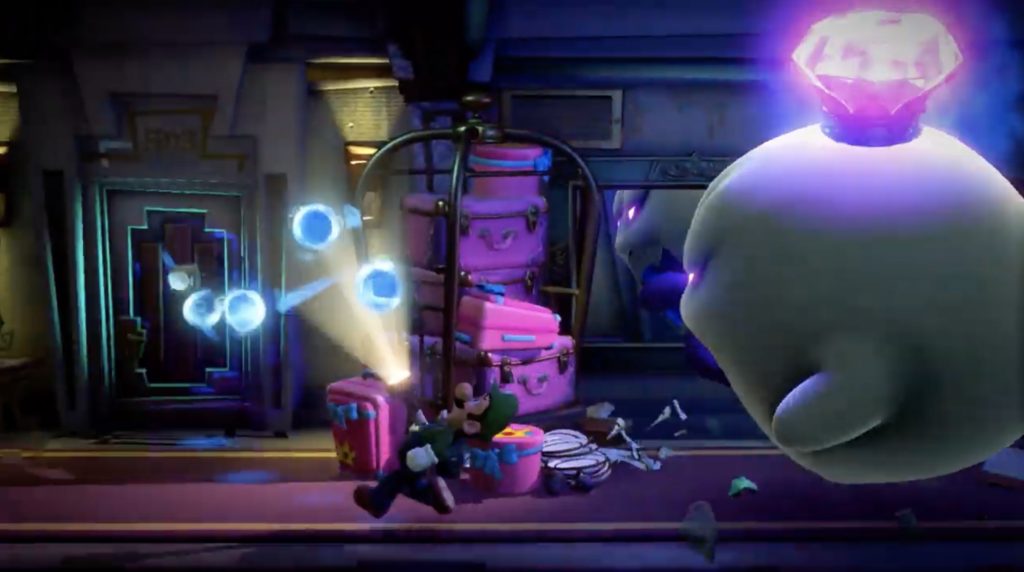 King Boo returns too. Suspect this won’t be his final battle

But that doesn’t mean all the features from that game are gone. No, the Scarescraper returns here, giving you online multiplayer support for the title. It’s also been upped to 8 players at once, and adds some more variety to the rooms and obstacles, since ‘download play’ isn’t an issue any more. 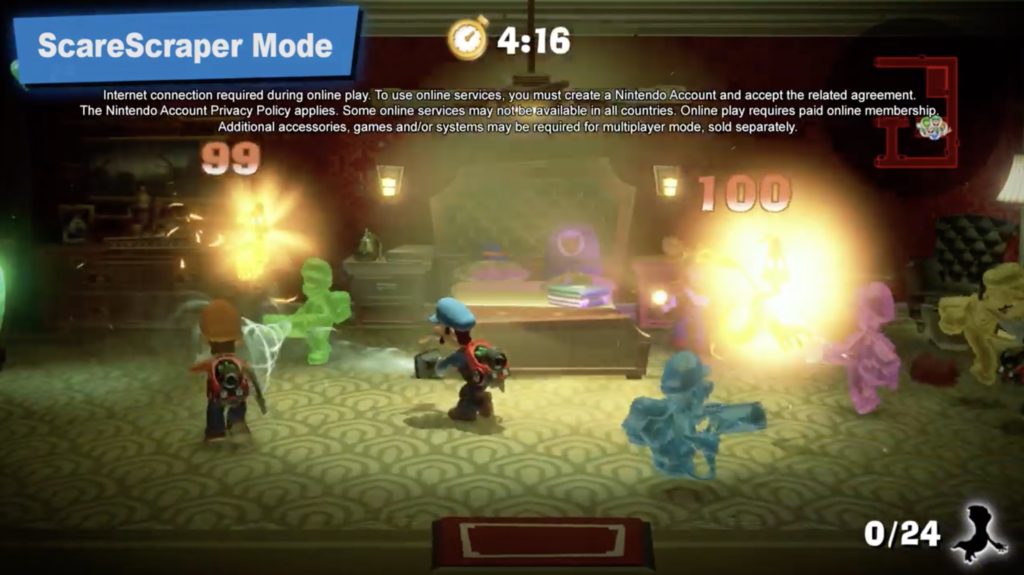 And that’s not all the game has in the multiplayer department. Nope, Gooigi from the Luigi’s Mansion remake on 3DS makes a return as well, and will appear act as a partner for Luigi in the single player mode. In this state, he can slip through spikes and other obstacles, though has the usual weaknesses to things like water and fire from the last game. 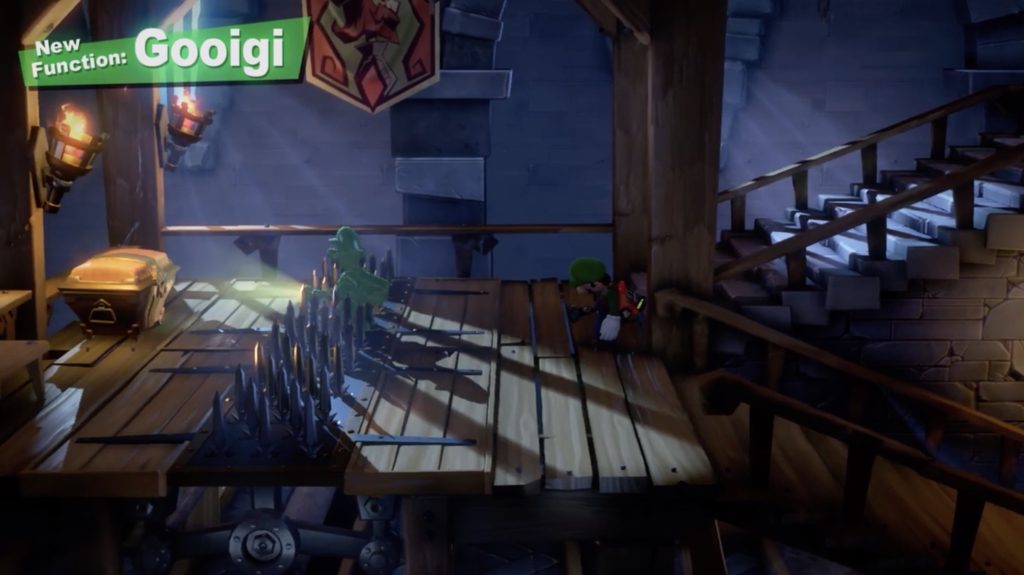 He can also be controlled by a second player for a co-op experience in the main adventure mode. Pretty neat eh?

Yeah, we’d say so. We’d also say the story focus here might be pretty neat too, since not only does it confirm that Mario, Peach and friends are all being held in the hotel, but that Polterpup from Dark Moon came along as Luigi’s pet. Again, a neat touch, though how it’ll play out we’re not quite sure. 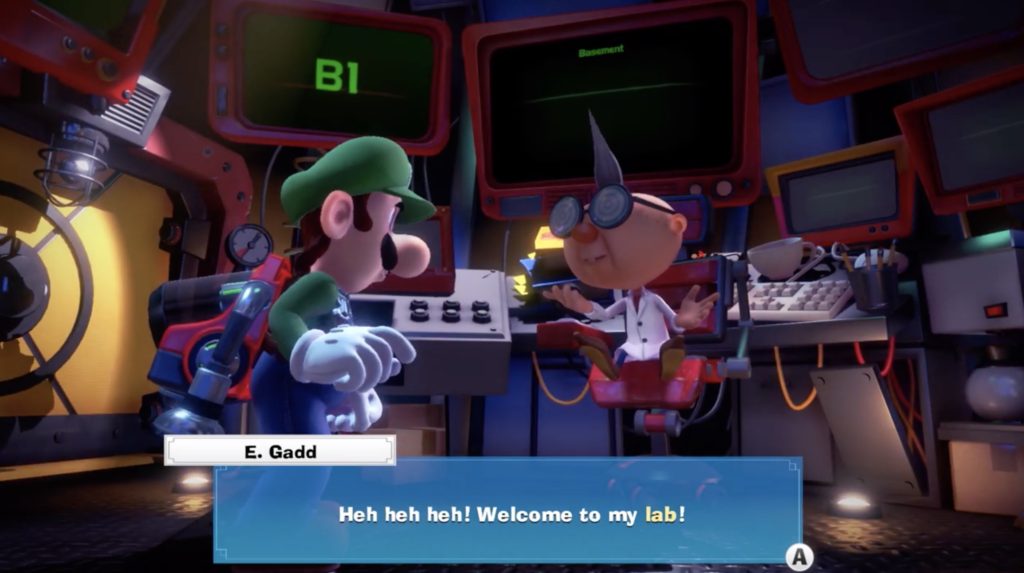 E Gadd returns too, because of course he would

Finally, there are some new moves here too. These include a pulse that can push ghosts away, a slam move that can piledrive them into the floor, and a suction cup move which was first shown in the Smash Bros Ultimate trailer for Simon Belmont. All of these should add a bit of extra gameplay variety to the proceedings, especially if stuff like the Darklight returns from the older titles.

Luigi’s Mansion 3 will be available sometime in 2019.

So check out the video, then tell us what you think in the comments below or over on the Gaming Latest forums! We’re always listening!