Is Super Mario Odyssey Getting a Sequel Soon?

Is Super Mario Odyssey Getting a Sequel Soon?

When it comes to 3D Mario, news has been fairly quiet over the last couple of years. Indeed, since the release of Super Mario Odyssey back in 2017, we haven’t really got much in the way of a follow up or any DLC for the title, with the nearest things to a new Mario platformer being the 3D All-Stars Collection in 2020 and Bowser’s Fury in 2021.

It’s an interesting situation, and with 2022’s general lack of Mario content, one that made us wonder what Nintendo was planning with the series.

However, it seems things might soon change. Why? Because Nintendo has been sending out emails about the original Super Mario Odyssey encouraging players to replay the title, many years after its original release. Here’s a sample of one of said emails from Nintendo Prime:

Uh… Nintendo is emailing me and others about Mario Odyssey in 2023. They REALLY want us to play the game again…

And this has made a fair few people wonder… could we be seeing a follow up soon?

Could Nintendo be working on a new 3D Mario platformer for 2023? Like say, a Super Mario Odyssey 2?

Personally, we believe there’s a decent chance they could be, and that’s for a number of reasons.

First, it just seems logical that Nintendo would want a follow up here, since Super Mario Odyssey is literally the most popular 3D Mario platformer ever made. Seriously, look at the sales for this thing. 24.4 million copies by September 2022.

That’s completely insane. Like, it blows the previous titles out of the water in the same way Breath of the Wild did for prior Zelda games, and shows a huge demand for 3D Mario platformers on Switch. So from a purely business standpoint, it makes perfect sense to make a sequel. Galaxy 1 got one after all, and that sold less than half what Odyssey did.

And the timing couldn’t be more perfect either. After all, 2023 feels like 2017 2.0 in many ways, with a new open world 3D Zelda game in the form of Tears of the Kingdom and what’s practically a new Mario Kart game on top of that (the Booster Course Pass waves 4-6). Tears of the Kingdom and Super Mario Odyssey 2 in the same year? That would be so cool!

So a 3D Mario just feels like it’d slot perfectly into this year, and alongside the likes of more Mario + Rabbids DLC, Pokemon DLC and spinoffs and Pikmin 4, give Nintendo one hell of an amazing year to revitalise interest in the Switch just before the inevitable next console.

There’s also the fact that Nintendo emails and surveys have often been hints towards upcoming games too. For instance, back in 2021, Nintendo asked if anyone would be interested in buying a new WarioWare game in the same fashion:

Lo and behold, we got WarioWare Get It Together the same year. WarioWare: Get It Together got revealed shortly after a Nintendo survey

And the Pokemon Switch one in the same year, which may or may not have been gauging interest in Pokemon Sword and Shield and other such titles.

So the fact we’re getting an email about Odyssey nearly 6 years after the original’s reveal does seem like Nintendo’s way of seeing fan/media reactions to an upcoming title here. Or at least, to something involving Super Mario Odyssey.

There’s also the fact that Nintendo sequels tend to come about when the company has too many ideas for the original, and can’t fit them all into the free DLC/updates. That’s how Tears of the Kingdom came about after all, and it’s why Super Mario Galaxy 2 exists as well.

And we’re gonna hazard a guess the same applies to Odyssey as well. Hell, just like the Art of Super Mario Odyssey book and all its concept art for goodness sake! It’s packed with ideas for kingdoms, enemies, bosses, characters and powerups that never made the previous game, and we wouldn’t be surprised if a fair few got retrofitted for a sequel instead. 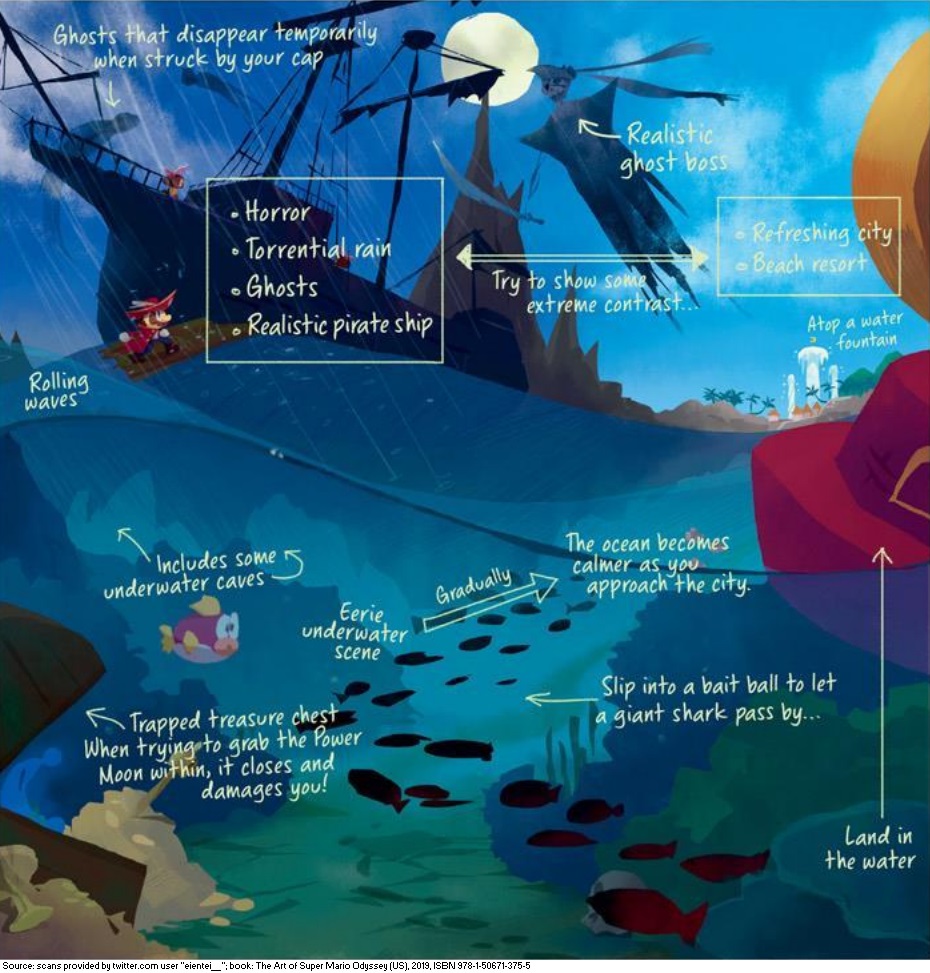 For instance, this early artwork of the Seaside Kingdom could easily be adapted into a new area

Finally, this is basically the Year of Mario as it is. We’ve got the movie in April, Super Nintendo World in February, and god knows what else later in the year. As a result, it seems almost inevitable that Nintendo would want to capitalise on that, and have a big flashy Mario title ready sometime this year. Gotta convert those moviegoers somehow!