Dry Bowser May Not Be the Final DLC Character in Mario Tennis Aces!

Dry Bowser May Not Be the Final DLC Character in Mario Tennis Aces!

Yesterday, Nintendo released a trailer for Dry Bowser in Mario Tennis Aces. Seemingly meant as the final character, the Koopa King’s skeletal counterpart is a fitting end to the game’s roster, and offers a unique set of skills not present anywhere else in the title.

Thing is, he may not really be the last character. In fact, if the official site is to be believed, he may not even be the penultimate one.

And that’s because while the Japanese site hints at him being the final DLC character, the actual layout of the site heavily suggests otherwise. For instance, do you notice anything off with this page layout? 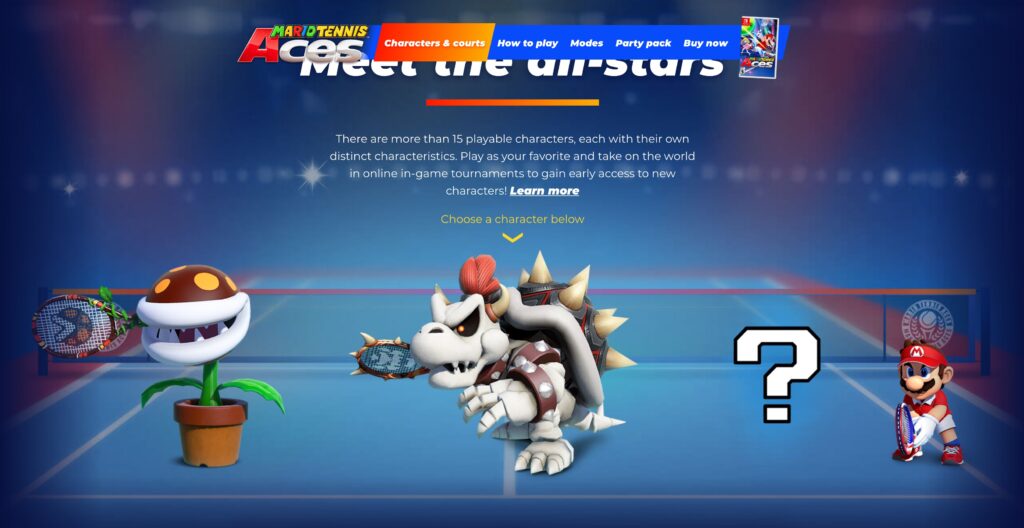 Note the ? between Dry Bowser and Mario

Yeah, it’s got a very clear gap for another character next to Dry Bowser.

What’s more, it’s not the vague Smash Bros kind either. This ain’t just ‘there’s a bit of space on the screen, and a character icon could theoretically go there’.

It’s a full blown placeholder character slot, complete with ? symbol. That’s about as clear a piece of evidence for an actual character as you can get, especially given its front and centre on Nintendo’s own site.

So who could it be? And how could it make sense given that Dry Bowser was mentioned as the final character in Aces?

Well, we’re not sure really. For the former, it could be any number of Mario standbys, ranging from King Boo to Professor E Gadd to various mook species like a Hammer Bro or Goomba. Hell, even a bit more Odyssey representation could make sense, assuming Cappy wanted to join in with the whole tennis lark.

Either way, there are certainly plenty of possibilities there.

But it doesn’t help clarify the ‘no more DLC’ situation. In fact, the character slot on the website only makes it all the more confusing.

Why? Because there’s something a bit different about our mystery man’s description. Can you guess what it is?

Yeah, it’s a notice that you unlock extra characters by progressing through the game.

Thing is though, you don’t. As it stands right now, you don’t unlock any of Aces’ extra characters by playing through the game.

Instead, you unlock them in online tournaments, or have them made by default available later on. It’s like ARMS really; a system where you steadily get new characters given to you over time rather than having them locked to story progression systems.

So the wording in the character description here makes no sense. Unless… our mystery newcomer isn’t just given to us during a tournament?

Yeah, it sounds odd we know. But it may make sense when you think about it a bit more. All the ‘Dry Bowser is the final character’ talk might simply mean the online tournament aspect is over and done with, with said newcomer being made available by some story mode DLC or something instead. That’d explain the description, and give Nintendo an ‘out’ in regards to their previous social media comments and what not.

Or perhaps we’re just overthinking. Either way though, the character slot is there, and it hints that Dry Bowser may not be the last playable character for the game overall. All we can do now is wait and see what newcomers the future may bring.