Charles Martinet: Here’s What Mario Says When He Throws Bowser in Super Mario 64 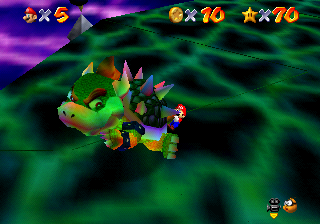 For many years, fans have wondered exactly what Mario says when he throws Bowser in his boss fights in Super Mario 64. Some of them thought he said So long, gay Bowser, leading to a whole about Bowser being homosexual. Some thought he said So long, King Bowser, with Mario reading out his enemy’s full name and title as he hurls him into the distance.

And some just thought it was so long eh Bowser, with the eh being part of Mario’s Italian accent. It’s a line with many different interpretations, and given the low quality of the voice sample in game, one where any one of these was seemingly as valid as the next.

But now we’ve finally got an official answer. Why? Because on Twitter today, Mario voice actor Charles Martinet revealed exactly what said line was in reply to a fan question. Here’s the tweet about it from his profile:

As you can see, it’s basically just the old ‘So long King Bowser’ theory, as expected all along. That said, the theory about Mario’s Italian accent playing a part was correct too, since yes, he apparently says the line with a tinge of said accent too.

So yeah, it looks like we can finally put that old ‘Gay Bowser’ meme to rest once and for all. Thanks for clearing it up Mr Martinet!