A New Glitch Turns Link into a God in Zelda Breath of the Wild!

A New Glitch Turns Link into a God in Zelda Breath of the Wild!

Good grief, the glitches in the Legend of Zelda Breath of the Wild are utterly crazy, aren’t they? Indeed, not only do we have a way to become immune to climate and temperature effects and a way to gain infinite height at will, but we can also setup new game + files, keep the Bow of Light and create ridiculously overpowered weapons too.

It’s incredible how busted the game is really, and utterly wild that its glitches somehow let you do things previously reserved for Gameshark or Action Replay codes.

And that’s even more true of today’s glitch discovery too. Why? Because this glitch isn’t just broken, it outright makes Link a nigh invincible god too!

Yep, just a few days ago, folks in the speedrunning community found a way to make Link completely invincible, as well as give him infinite stamina and the ability to ignore cutscene triggers altogether. As a result, players are now able to do things like walk into Gerudo Town in any clothing, explore the entirety of the Lost Woods, and play Eventide Island without losing their equipment, among many other things. 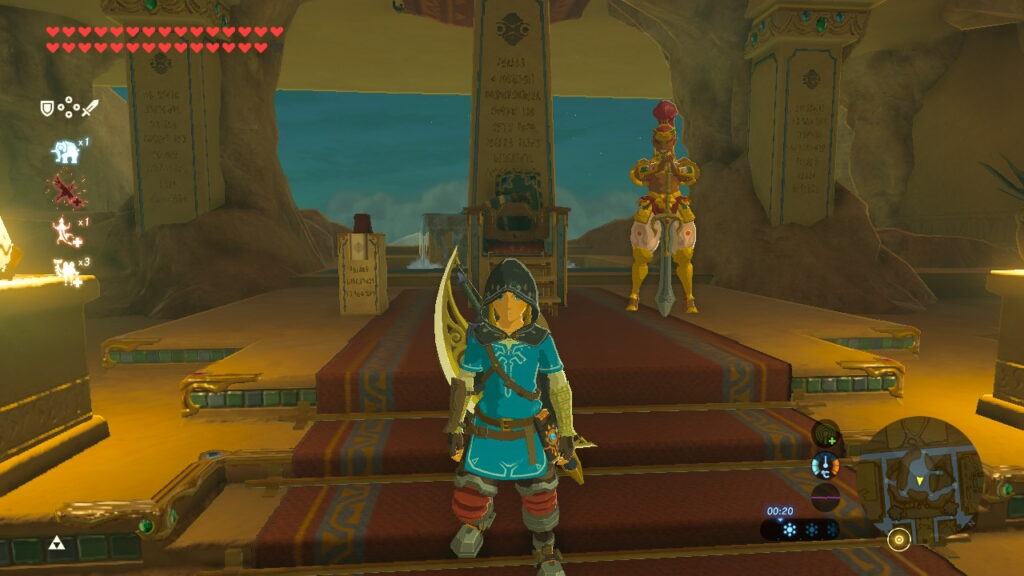 So, here’s how it all works, and how you can use it for your playthrough today!

Starting with a video tutorial. If you don’t fancy reading any further, we’ve posted a nice handy tutorial for this glitch on YouTube, which you can see here: 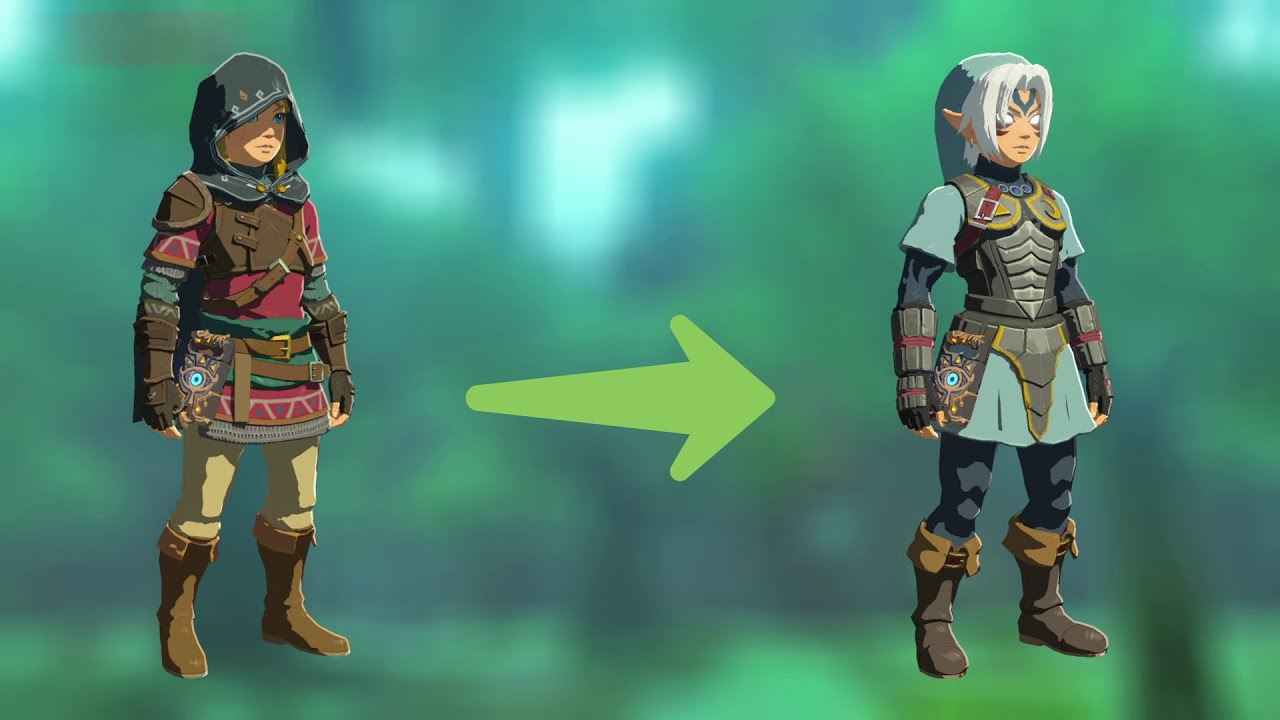 If you don’t want to watch a video (or need more info on how it all works under the hood), keep reading!

With the first port of call being the glitch names and distinctions. Put simply, there are 3 relevant glitches here, and they’re all connected to each other.

Map Storage lets you keep things like the Sheikah Sensor prompt outside of the menu, and open the Hyrule Compendium in other parts of the game. By doing this, you can explore Hyrule with about 80% of the screen covered with random pictures and text.

Inventory Storage is a glitch related to that, where by reloading a file and doing a few other steps (more info later), you can explore Hyrule while the inventory is open. This lets you save anywhere, use things like shops, beds, campfires, cooking pots, etc while in the menu, and setup the ARMs glitch.

Finally, ARMS is basically Breath of the Wild god mode. By unpausing during Inventory Storage, then entering water with an empty stamina wheel, time freezes and Link becomes a nigh immortal god with infinite stamina, a complete immunity to taking damage, and all the benefits of Apparatus Storage among other things.

First, you’ll need to set up Map Storage. Here’s how to do this: 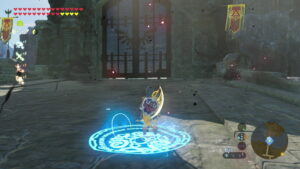 Go to this bridge, where the is about to change to the castle map 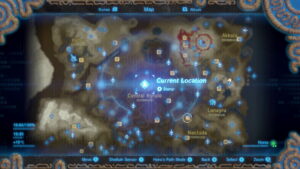 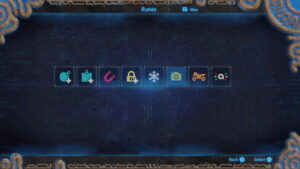 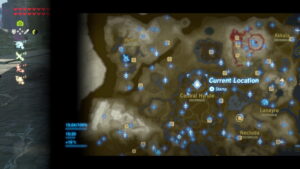 By closing the menu and switching tab at the same time, this effect will occur 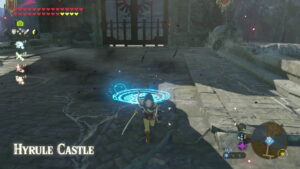 As you can see, the cursor is on screen in the world

If done correctly, you’ll hear a ‘confirmation’ type sound, and a cursor will appear on screen when you exit the castle area.

At this point, pressing A will have the Compendium open in the overworld, and Map Storage will be setup.

However, if you want to do Inventory Storage instead… 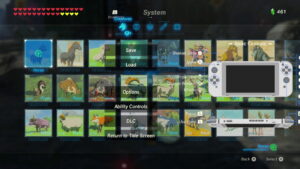 Opening the pause menu makes the compendium appear in the background, like this 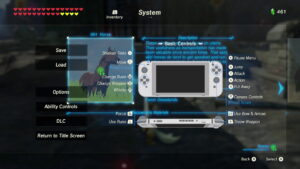 Selecting an item gets you here 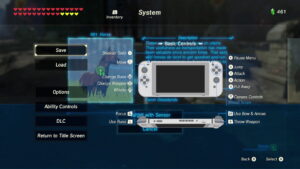 And once you do, you can select the pause menu, letting you load a file 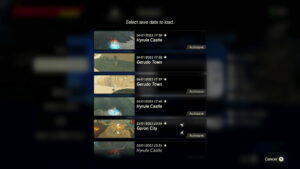 The cursor will initially be weird here. Moving it lets you select items properly 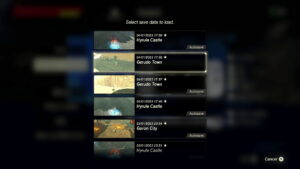 By selecting an older save, the cursor trick gets carried over to that file 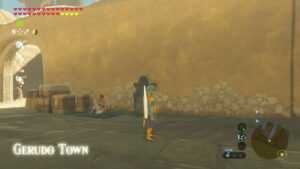 And it can be seen when you open the file 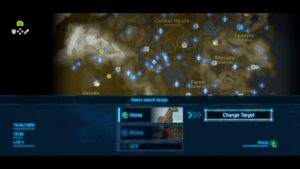 A few seconds after pressing A, the map opens 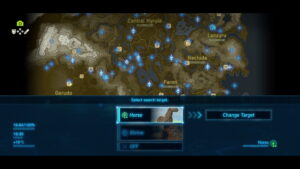 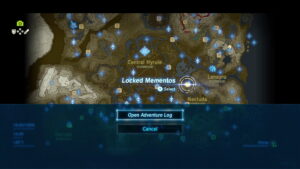 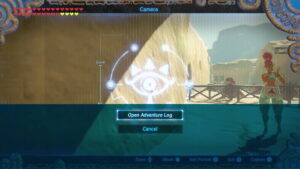 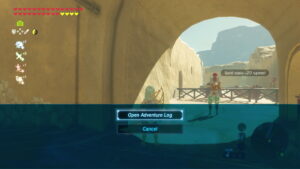 And pressing L again lets Link run around with it on screen, as seen here 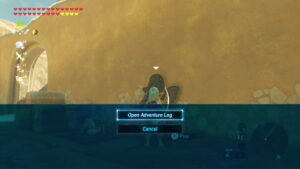 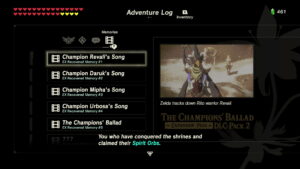 But the statue dialogue keeps going! 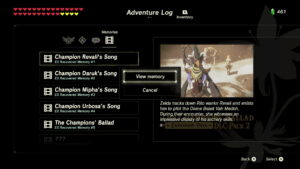 Viewing a memory in this state keeps the glitch going 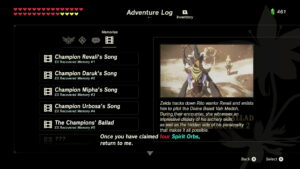 Letting you end the dialogue without closing the menu 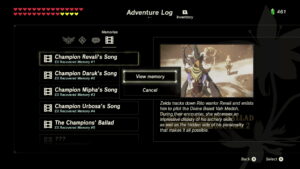 This is Inventory Storage. You can now walk around while the menu is open, and interact with things while still in the menu.

However, please note that the actual overworld and player version of Link isn’t ever visible here. So, you’ll have to navigate Hyrule completely blind if you want to do things in this state. Ah well, at least you can’t take damage or die while in a menu!

Regardless, if you want to do ARMS… 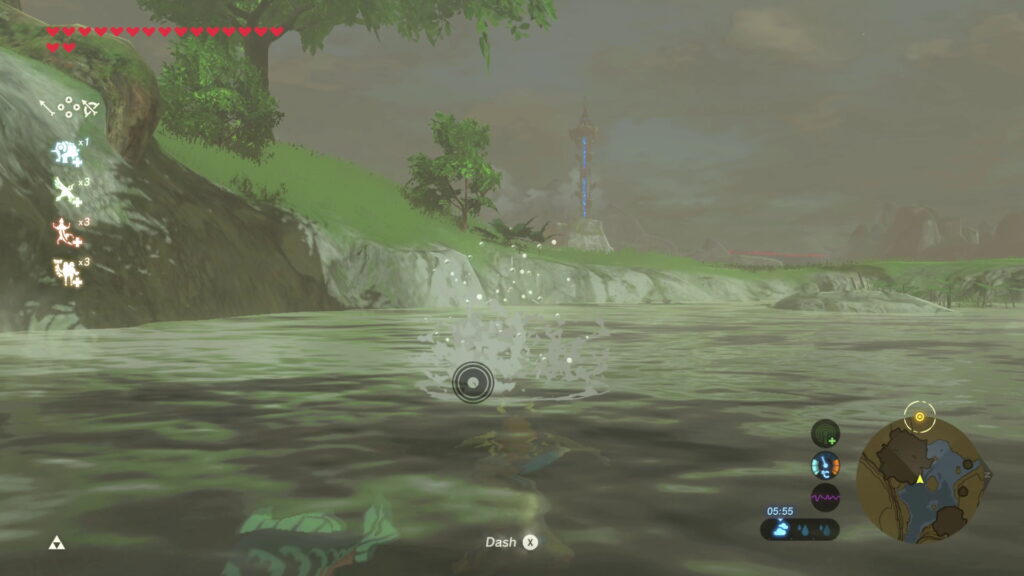 So, we’ve covered the setup there. Here are a few things to watch out for though.

Firstly, Link and the menu cursor will always move at the same time if using the above two glitches. This can get VERY disorientating, so be careful.

Secondly, if you’re trying to get anywhere with Inventory Storage active, it’s best to rely on sound/music cues above all else. Things like enemy/Guardian themes and area themes are great ways to know what’s nearby, and somewhat orientate yourself towards your intended direction.

As for ARMS, the following things will softlock the game (albeit usually till you end the glitch):

And the following will just end it regardless:

However, using your sword/shield/bow will work fine, as will any kind of exploration (walking/climbing/gliding/swimming) and picking up items in the overworld.

Regardless, that’s how to use those new glitches. Hope you have fun using them, and breaking Hyrule to a million pieces once again. If you have any questions, check the FAQ below, or ask over on the Gaming Reinvented Discord server today.

I can’t get this glitch to work! Why is it so hard?

The basic setup for Map Storage relies on a few near frame perfect inputs, so it will be tricky to pull off, especially at first.

Nothing involving Inventory Storage or ARMS is frame perfect thought, so if you can setup Map Storage, the rest should be a breeze!

What happens if I do this while leaving Hyrule Castle rather than entering?

If you press Y, I think the same thing occurs. If you press X, then you store the ‘leave castle’ prompt instead. That’s got its own interesting quirks and uses, which we’ll cover in future.

Why can’t I select the right option?

If your Sheikah Sensor is off or set to shrines, or you don’t have the Sheikah Sensor +, said option will be unavailable and the glitches won’t work as expected.

Usually, the Hyrule Compendium takes priority, so you have to reach the description page for a filled-out inventory to get access to other options again. If your Compendium is still entirely blank, well RIP, I guess. The glitch won’t be possible, and you’ll have to reset to access any menu items again.

Do other objects work for Inventory Storage?

From what we’ve seen/heard, the Horned Statue, beds and (sometimes?) the Master Sword Pedestal also work.

Why did the game softlock after leaving Inventory Storage?

That happens sometimes, usually cause Link got stuck on a wall while in the menu.

The game softlocks when I try to enter Gerudo Town!

Ah, that’s because you’re using a sort of ‘half’ ARMS state, not the full one. If you don’t store the void out state first, then the game will softlock when it tries to load the ‘kick Link out of town’ cutscene.

How come I’m stuck in the water?

Did you shoot an arrow/use a sword while out of stamina in the water? That softlocks the game, like it does with moon jump.

What does invincible mean here?

Enemies can’t hurt you/cause you to lose hearts. Link can still ragdoll though.

Is it possible to die in ARMS at all?

Nope. Because you’re technically in a pseudo undead state, no damage is registered, regardless of whether its from attacks, falls, weather, lightning or anything else.

Wait, how come Link is shivering/dazed? I thought he couldn’t take damage!

He can’t take damage. Temperature effects and elemental attacks do nothing to him, like with Apparatus Storage. But that doesn’t stop the idle animations, lol

So, does this do everything Apparatus Storage does?

Yeah. Except it doesn’t break the glider.

Can I pick up and throw objects?

What happens if I reload a file in ARMS?

You get Apparatus Storage on said file.

What happens if Link falls in lava in this state?

He goes crazy and gets flung across the screen at high speed. We’re not sure why, but it does look hilarious.

Does my stamina do anything in this state?

Nope. The wheel can fill up, but it’s entirely visual. It’s infinite regardless.

Because time is frozen during ARMS. They recharge based on the in-game clock.

Does that time freeze affect other stuff?

Seems like it. From what we can tell, Stal enemies and Yiga clan members don’t appear when ARMS is active (unless they’ve got pre-set spawn points).

Why does the screen go near white in the Lost Woods?

The fog effect causes that. It fills the screen like it’s going to void you out, but doesn’t actually have the ability to in this state. Moving around a bit usually fixes it.

Why is the weather frozen?

From what we can tell, it seems like the weather gets locked when ARMS is active, at least in some cases. This means that in theory, the weather can get very weird and out of sync indeed.

Why did they call it ARMS?

Someone in the community liked the Switch game and wanted to use the acronym for a BoTW glitch name.