As you may know, a new glitch was recently discovered that lets you play the Legend of Zelda Breath of the Wild in first person. Showcased by various people on Twitter and other social media sites, the glitch completely changed the feel of the game, making Link’s adventure a whole lot more climatic by simply existing.

However, while the glitch itself got coverage, the actual way you pull it off did not.

That’s because the stories were based on short social media videos without much in the way of explanations, and in many cases kinda just guessed what the actual setup method was here. For instance, the Nintendo Life one just assumed you could set it up in five minutes by holding an item while the camera was open and cancelling it.

So now we’re here to change that, and explain the glitch once and for all! You ready? Let’s do this!

Starting with the items you’ll need. Here’s everything the First Person glitch requires in the Legend of Zelda Breath of the Wild:

Once you’ve got all that, you’re ready to do the glitch!

Here’s a handy video from our YouTube explaining the process for those who prefer video guides: 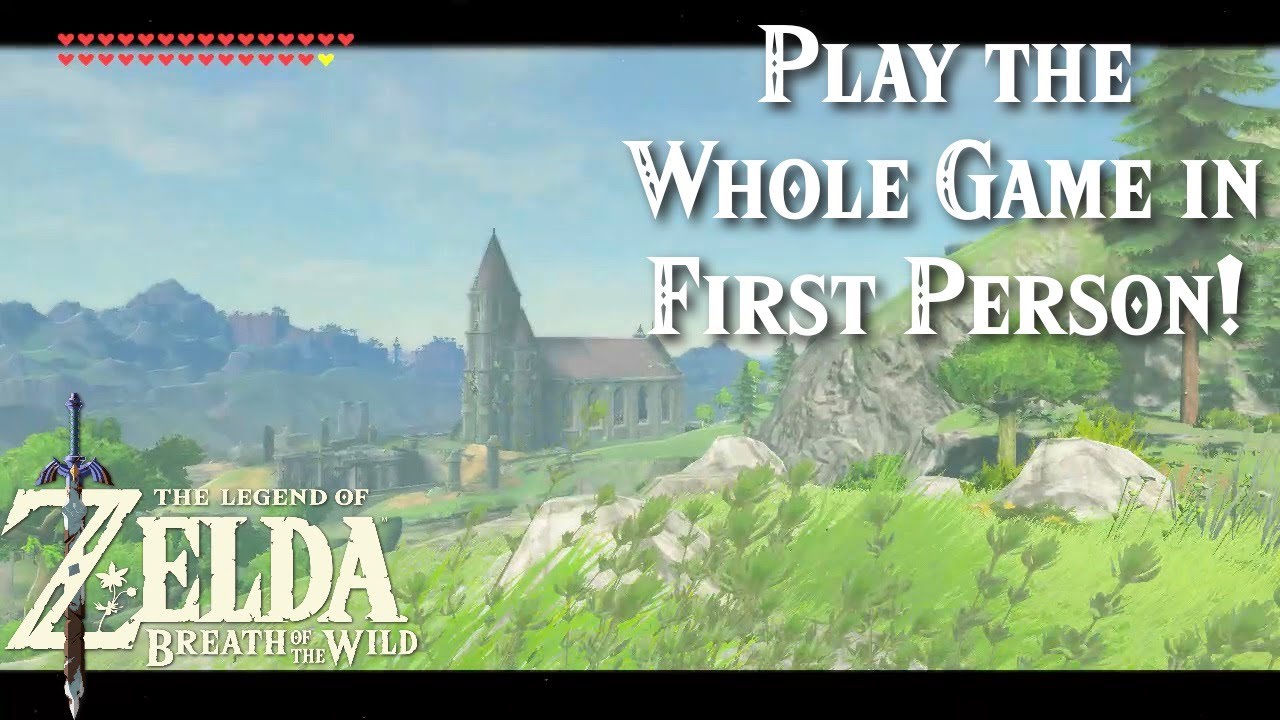 If you can’t or don’t want to watch it, read the instructions below instead.

Then when here, overload the game. You can do this by equipping a multishot bow: 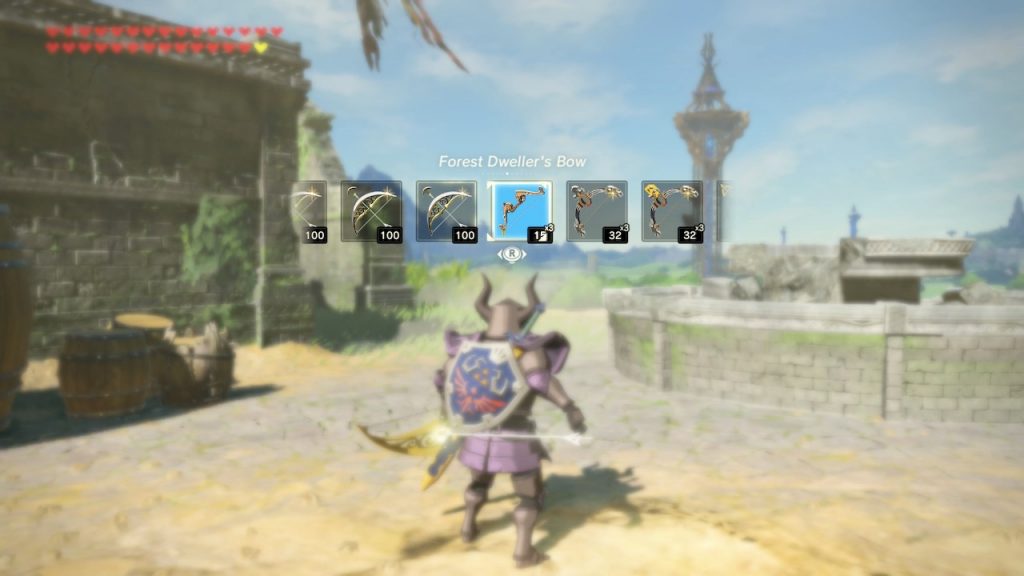 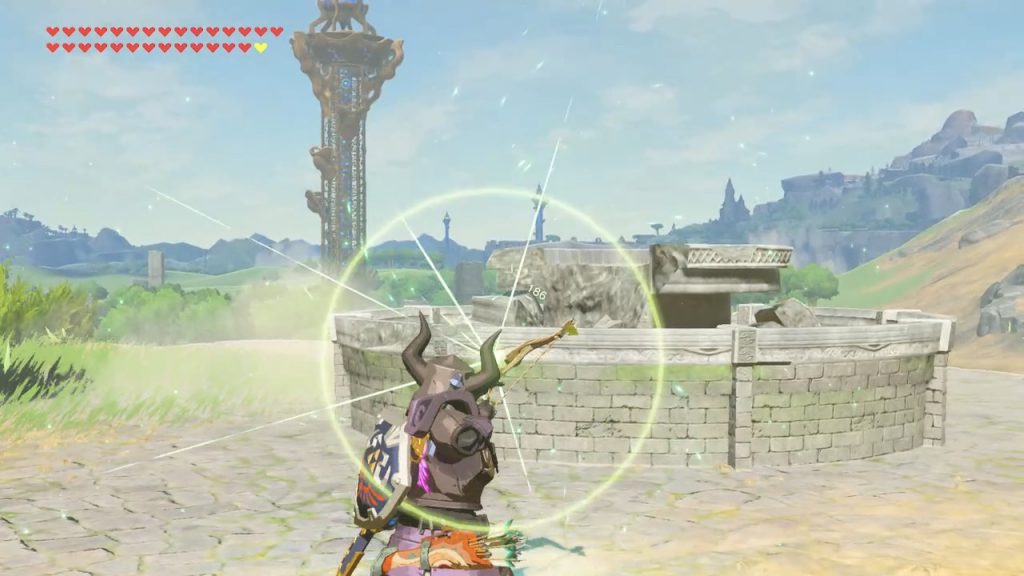 Then aim a shock arrow with it

Dropping it in the inventory: 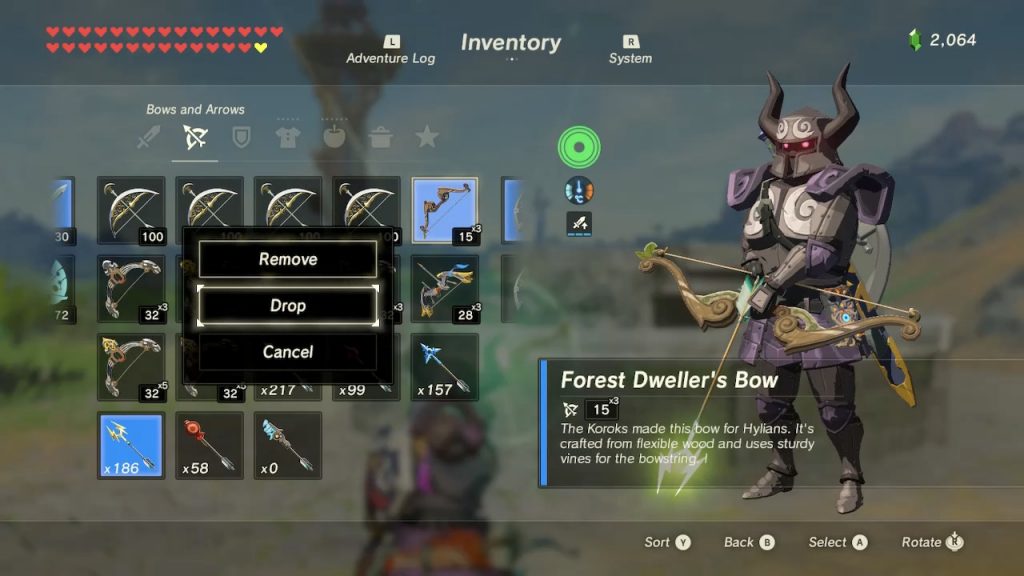 Before dropping it using the menu option

And repeating the process. Eventually Link will start to look glitched in the menu. 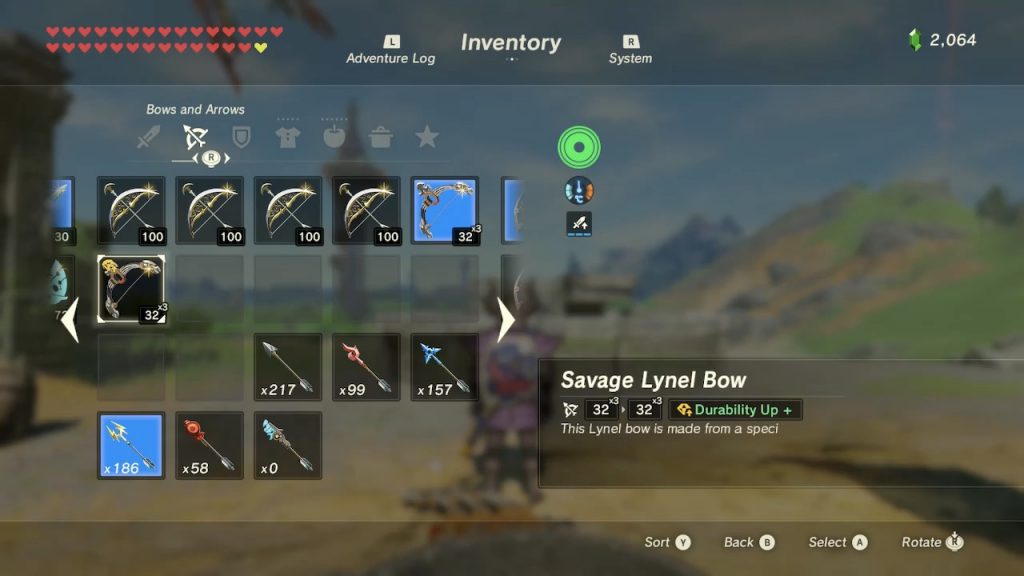 It’s very notable when Link is wearing the Phantom Armour, since he’ll be outright invisible instead

Once that’s done, try and hold an item. If you’re lucky, it’ll be visible in the menu, but won’t show up in game.

This is called the Item Smuggling glitch, and is a key part of the setup needed for the First Person View glitch here. You can also set it up in other ways (involving bombs, water, etc), but it’s much easier to overload the game with shock arrows here.

And make sure the Master Cycle Zero is present on the map. You’re basically looking for a way to fuel the Master Cycle with one item while smuggling another, and while Link’s model is offset compared to in game.

So next, line your horse up like so on these steps. 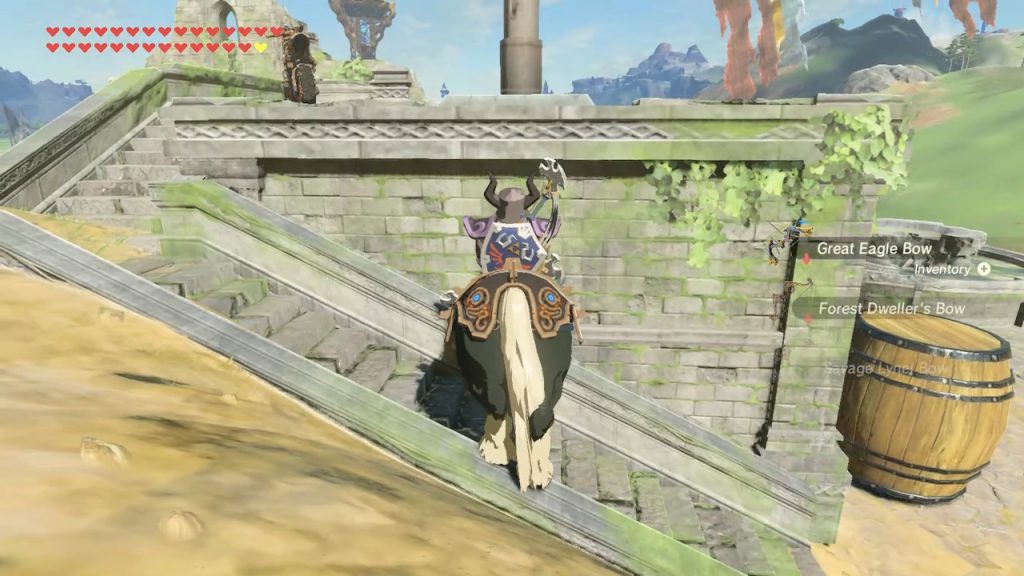 You want to make sure it’s roughly facing the flagpole, has its back legs on the ledge and its front legs the stairs, etc.

Once you’re happy with that, get on the horse, target with ZL, hold the jump button with X and hold A (as if you’re about to shield surf).

Now, stop holding X and Link will jump off. In mid air, keep hitting the shield button so you can angle him in a way he hits the ledge above somewhat horizontally. 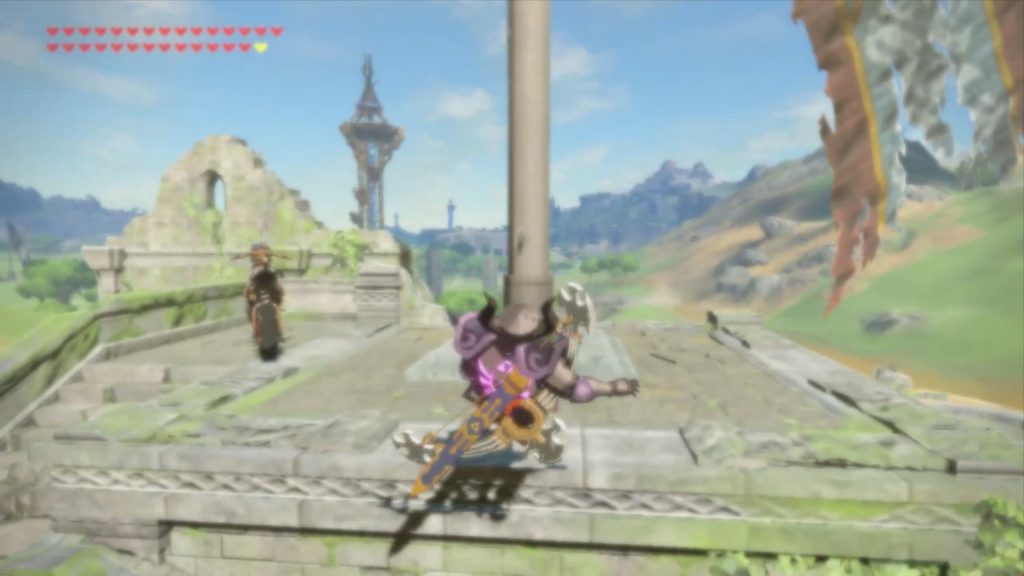 If done correctly, he’ll then wildly rotate to the right. Do the same thing as before, except remove your shield when it touches Link’s lower back and he’s roughly horizontal parallel to the ground. 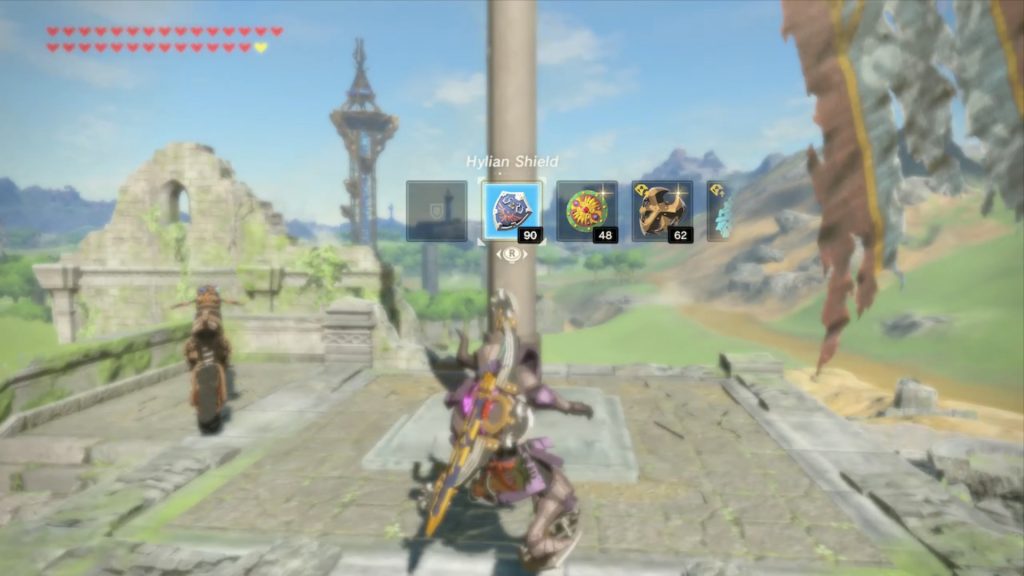 Now keep hitting the quick change shield button, and eventually Link should turn invisible. Once he does, immediately pause the game. 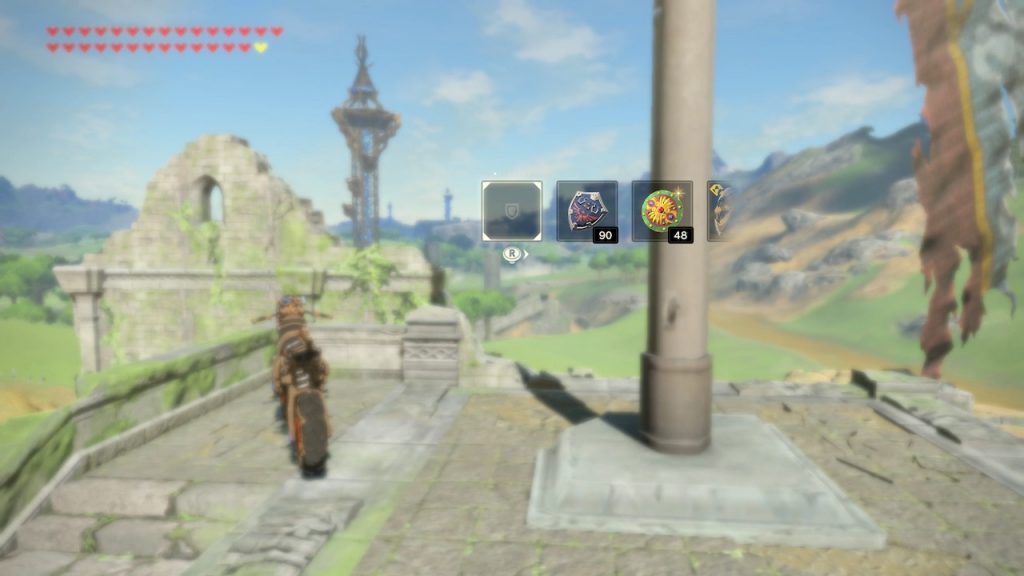 When Link completely disappears like this, pause the game

And hold an item. 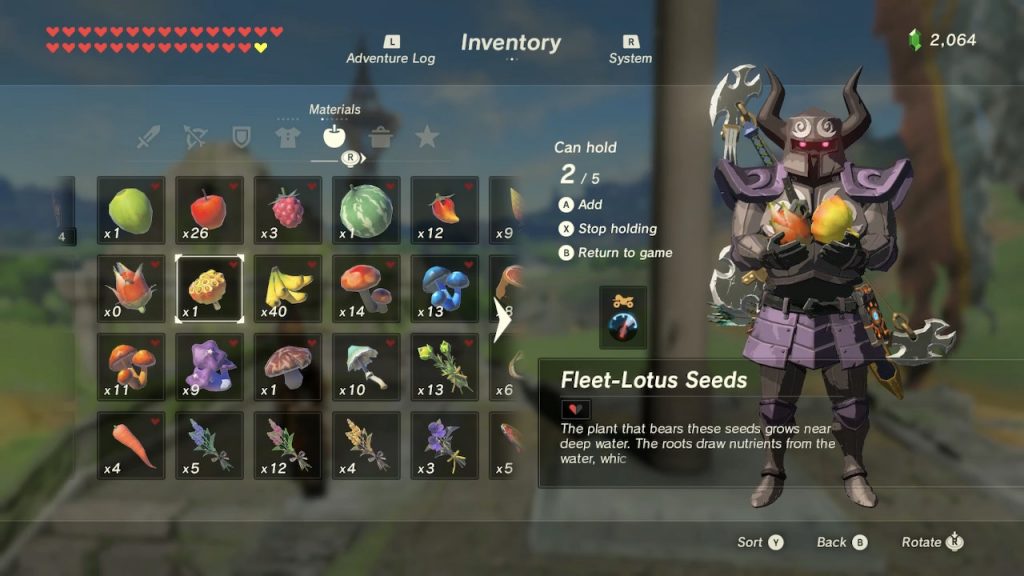 While Link is invisible in the menu hold an item

If you’ve done it right, he should drop down to the ground while holding it. If so, congrats! You’ve done the hardest part of the glitch setup. 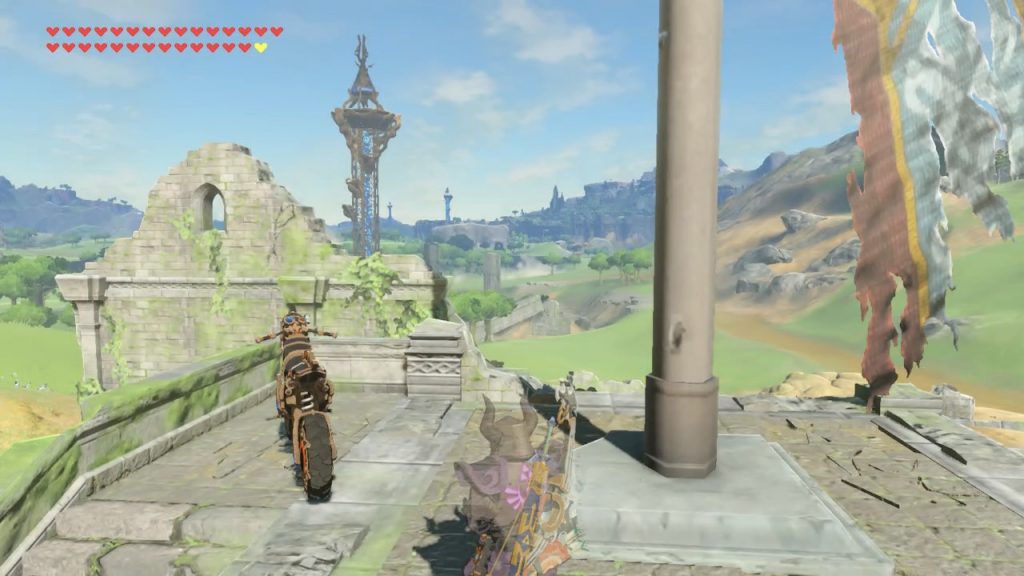 Link will fall while holding the item

On the other hand if it says he can’t hold the item here or it drops to the floor, then you’ve failed and you’ll need to set up item smuggling once again.

Regardless, once it works, fuel the Master Cycle Zero. 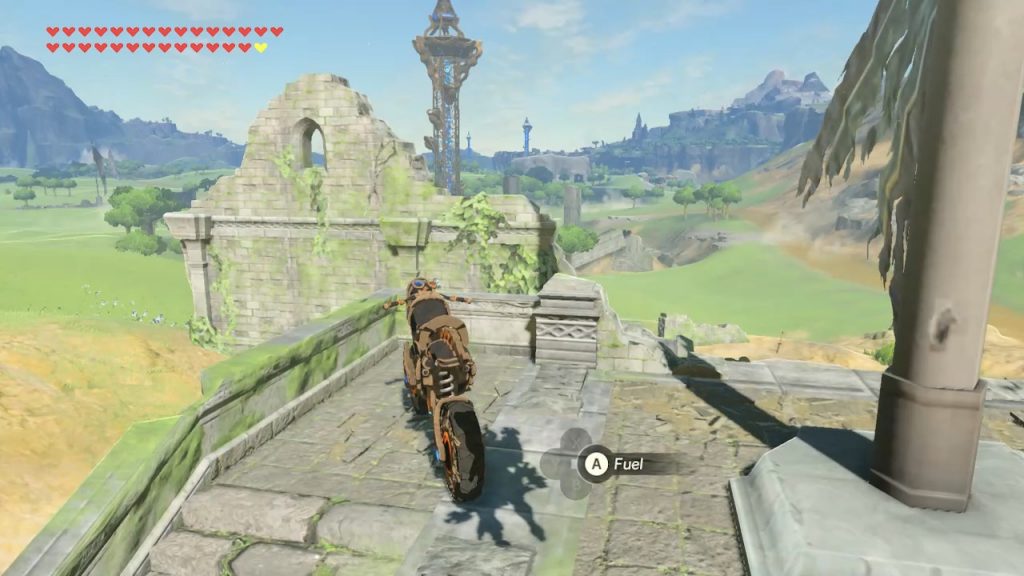 Fuel the Master Cycle Zero after falling to the ground

Hooray! You’ve now set up what I call the Permanent Item Glitch. This screws up dropped item properties, and makes the First Person View glitch an actual possibility.

And what’s more, it’s also very persistent too. If you activate it, you’ll still have the glitch active even if you…

Because of this, you’re now able to set up the First Person View glitch pretty much anywhere you like in the game, or in any possible situation. The only ways you can ever get rid of it is to cook something, fuel the Master Cycle Zero, or close the game entirely.

Regardless, now you want to drop an item. This will cause it to float away, leaving the targeting reticle on screen. 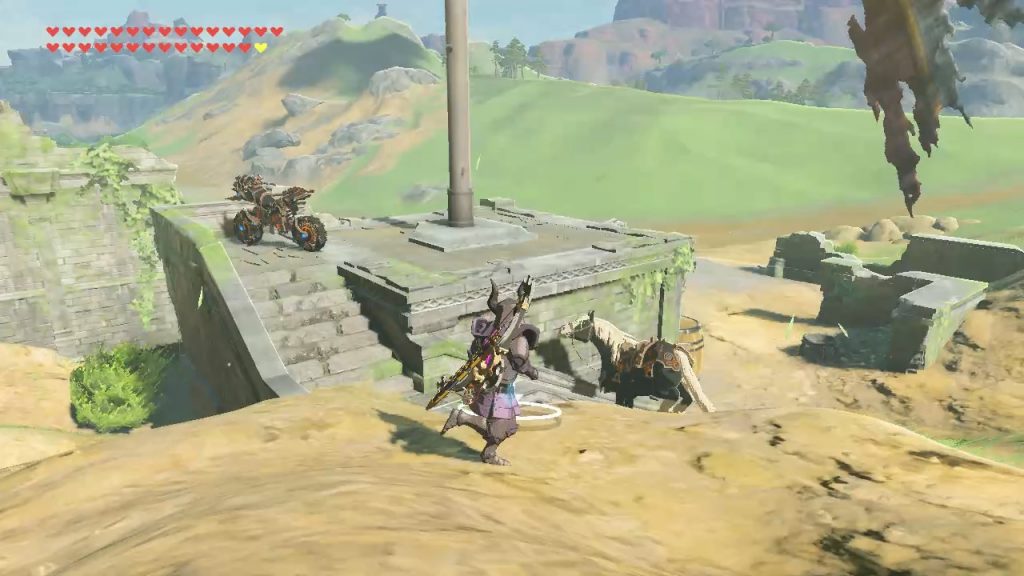 The item reticle will remain on screen after dropping an item. It looks strange.

Leaving you with only one more choice. Which version of the First Person View Glitch do you want?

Since there are actually two methods at this point. The basic, but very limited one, and the slightly more finicky but way more useful one.

For the former, you just need to open the camera: 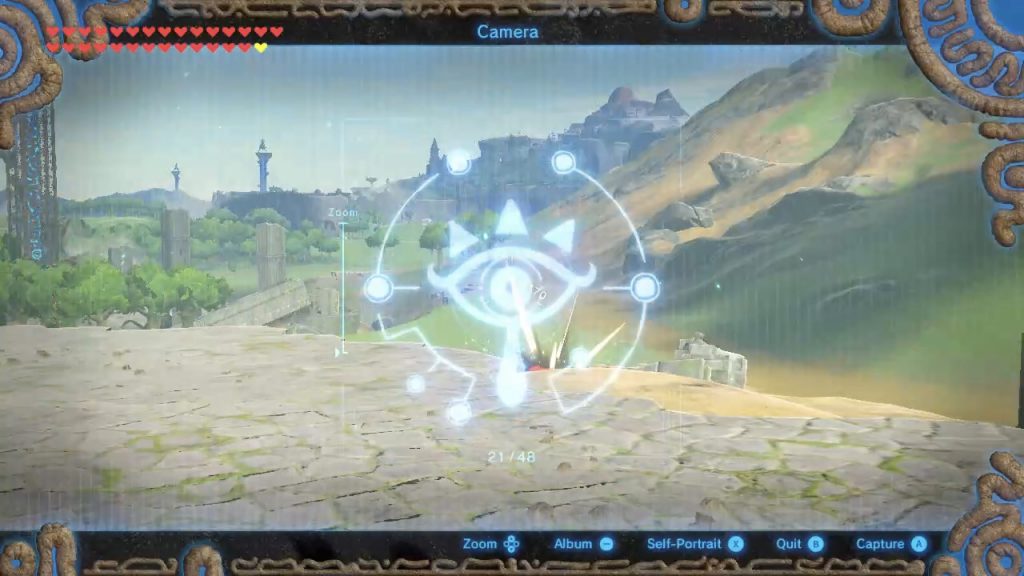 Pause and hold an item: 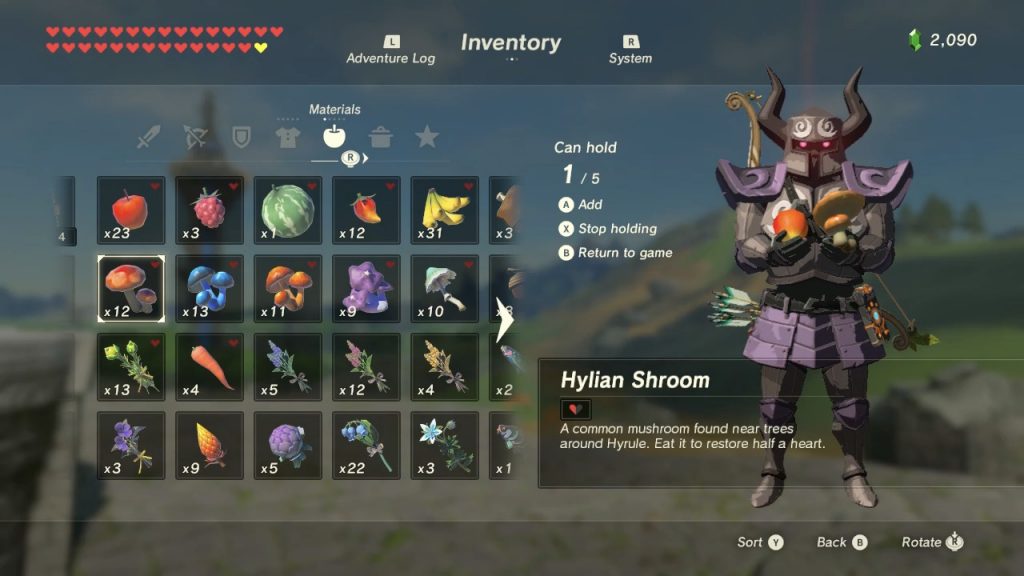 Then hold an item with the camera open, like this 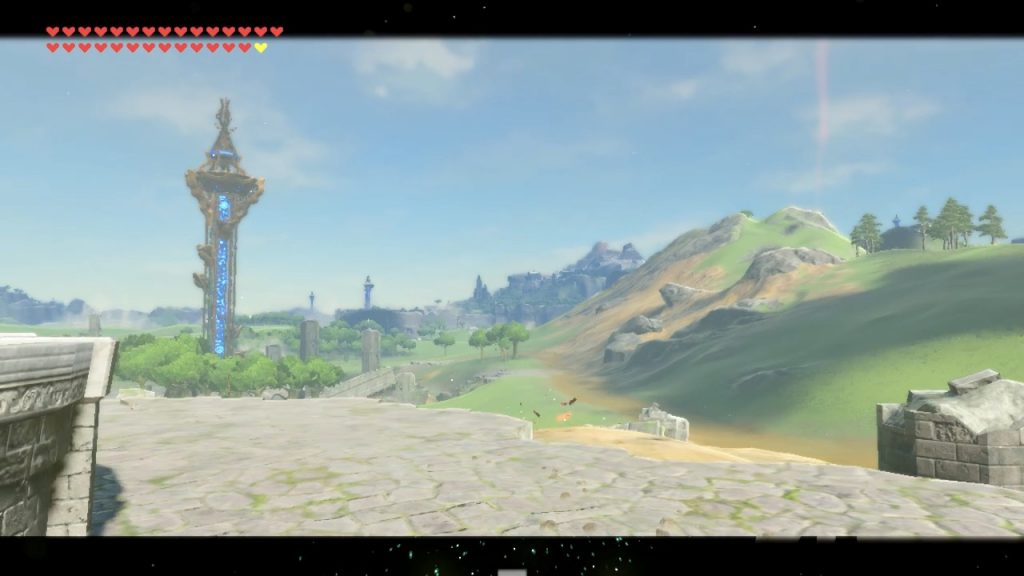 Unpausing with the item held will give you a very similar view, showing it’s nearly set up

Pause and stop holding the item: 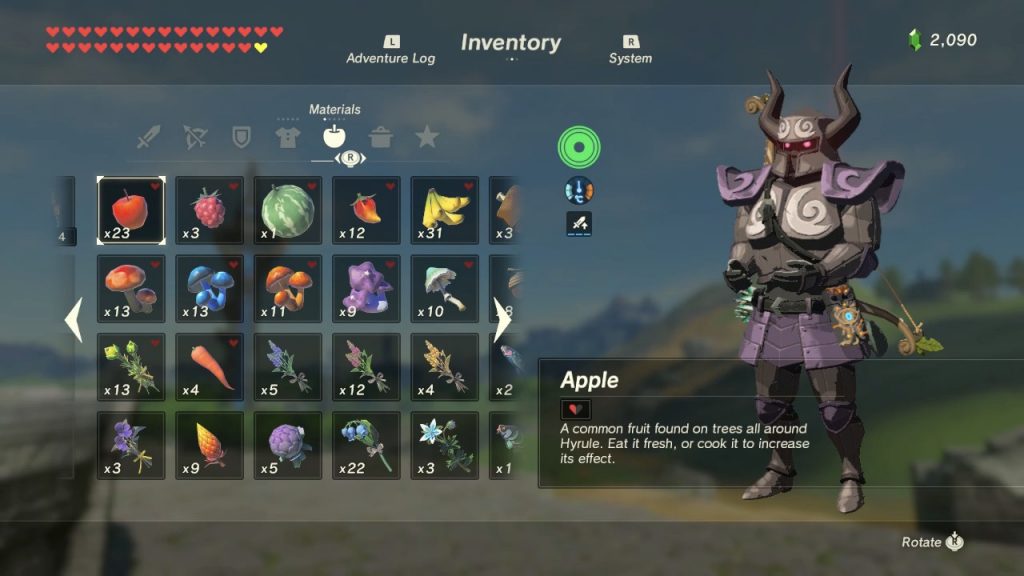 That’s it. You’ve got now got a first person perspective.

However, this is very limited. In this version of the glitch, all you can do is walk around. You can’t interact with the environment, shoot arrows, block attacks, etc.

It basically turns BoTW into the very definition of a walking simulator. Or maybe a really hard survival horror game where your character is completely helpless against everything else.

So to fix that, you’ll need the advanced method. And this requires a (extremely quick/simple) glitch to move while the camera is active.

To do this, just hold ZL to target, press the Z button and left stick at the same time (to crouch and use the camera simultaneous). 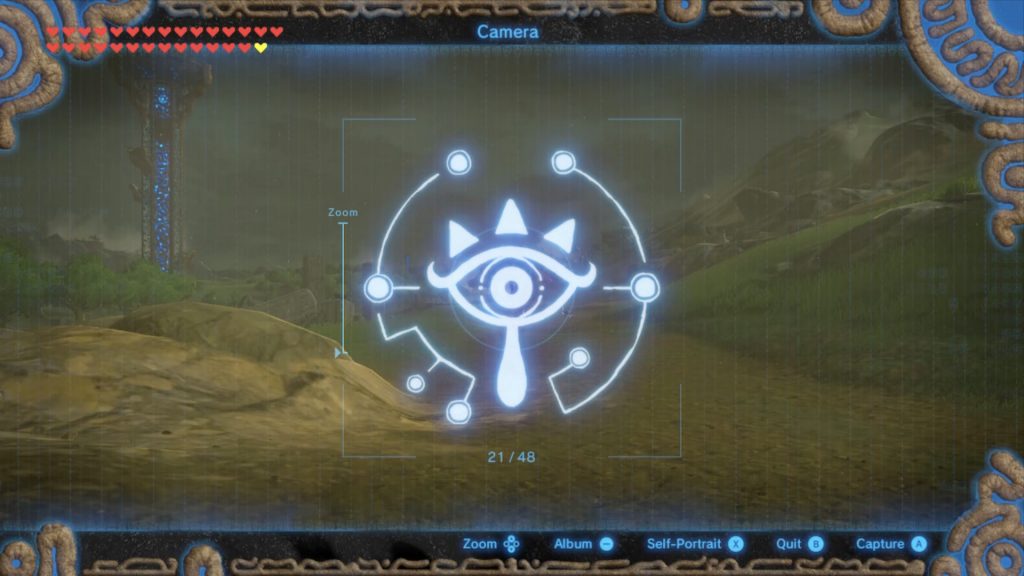 Activate the camera and crouch for this view

Then while targeting, press X and a direction to hop.

Link will now move around like normal in the camera view. 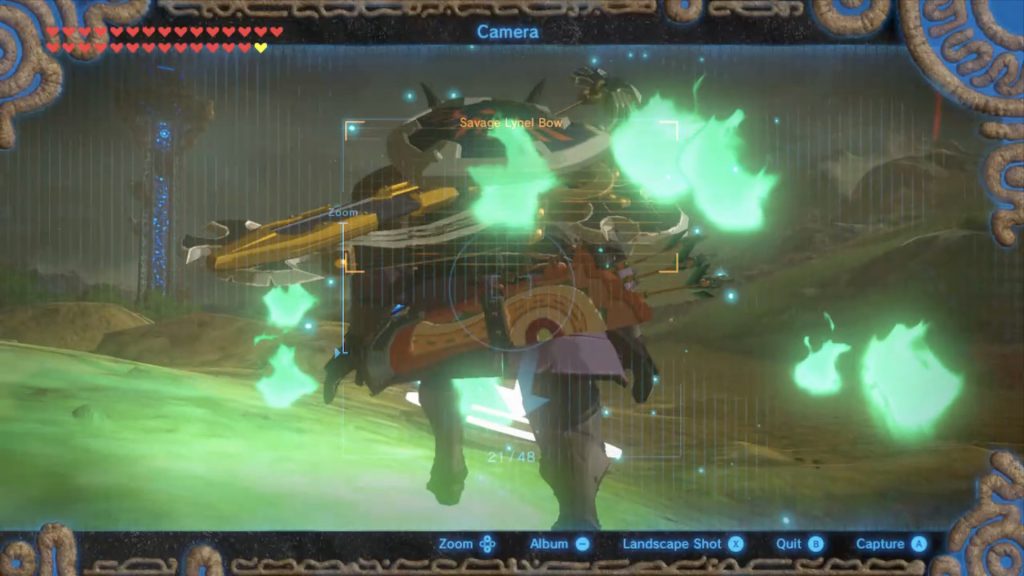 Now you can walk around in first person again, but now pick up items, shoot arrows and block attacks with your shield. It’s still not the most advanced featurelist in the world, but it at least lets Link somewhat defend himself. Like in a Doom style FPS or a target gallery game like Link’s Crossbow Training.

Once you have it set up however, there are a few things to keep in mind.

First and most obviously, if you ever take damage or use a melee weapon, the first person aspect will stop. It’s trivial to set up again (just do one of the two methods listed above), but yeah, if you want a cinematic experience, you’ll basically need to do a no damage run for howeer long you wish to use it for.

Similarly, it’ll also go away when you interact with the environment by talking to NPCs, opening doors, swimming, climbing, gliding etc too. So if you were planning to glide to Eventide Island in first person… sorry you’re out of luck.

Regardless, it’s great fun to explore the land of Hyrule in this new way, and to see some of the beautiful scenes from the perspective of Link or another character living there.

So try it out! It’s fairly simple to do, and enables all kinds of awesome possibilities for the game as a whole!

Does this glitch require the DLC?

Who found the glitch anyway?

From what we can tell, a guy called LetMeThinkOfAUsername found the Permanent Item glitch part, whereas another individual called Ax.k_ found the First Person View part.

Do I need to set it up at that particular location?

Not necessarily. Any similar type of ruin that can be used for the horse/skew based item duping method will work for the Permanent Item Glitch setup too.

So the location used by Linkus Speedruns here would work for the Permanent Item Glitch too: 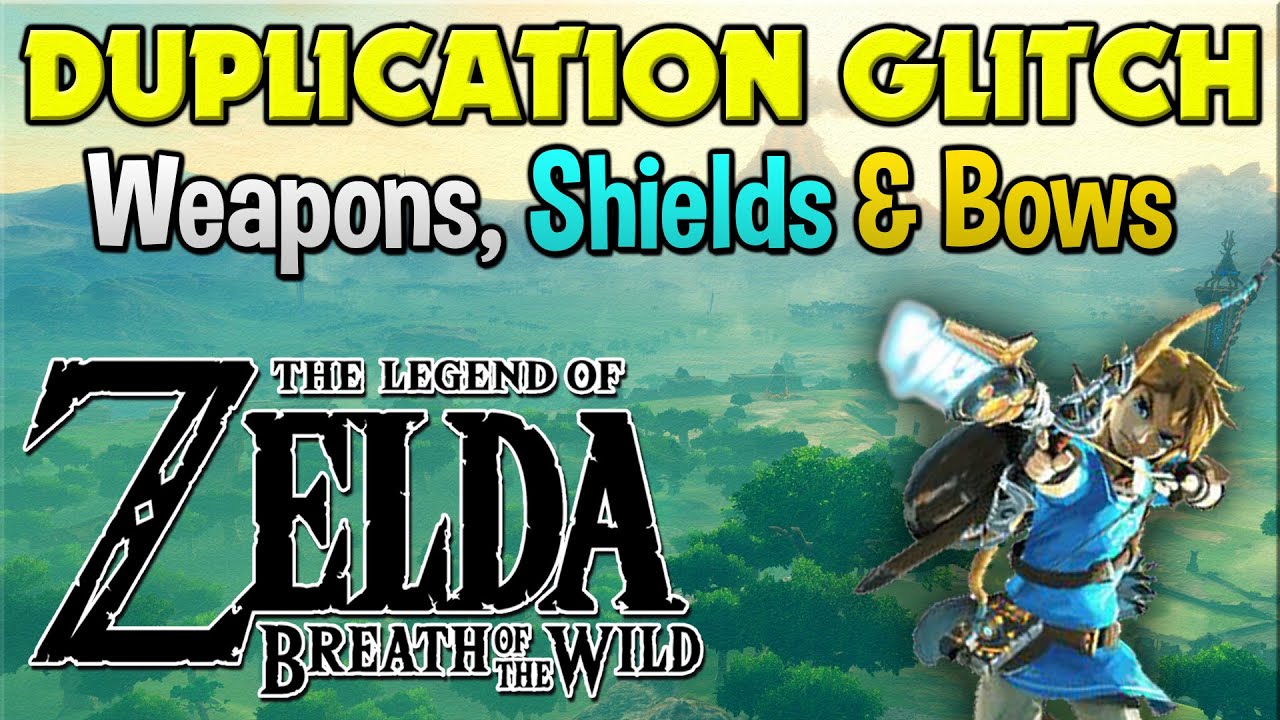 Item Smuggling doesn’t seem to be working for me! Link still holds the item despite the game being overloaded!

It’s a finicky one. Sometimes it’ll work for the first item you try, sometimes only particular items will work for this, and sometimes you’ll have to set up the overload thing again to get it working. Keep playing around with it until it works.

Why isn’t Link shield surfing off the horse?

Either you’re not pressing/holding A when you jump off or you don’t have a shield equipped. Fix that and try again.

Link just flops to the game/shield surfs as normal when I land on the platform!

That means your angle wasn’t quite right. Move your horse a few pixels, and try again.

How come I can’t summon the Master Cycle Zero or hold items?

If the game is overloaded, these aspects of it won’t work. Disable the overload effect once you’ve set up Item Smuggling.

Why does it say I can’t hold an item when Link is invisible?

Not sure, it’s probably cause he’s not counted as being on the ground. Try again.

Why can’t I set up the glitch to move with the camera open? The analogue stick ain’t working!

Joy-Cons have a tendency to drift or break. It’s possible it won’t register the press unless you really hammer the analogue stick down for a few seconds, which won’t work for this glitch. Switch to a Pro Controller instead.

Why do items fly off when I place them?

That’s the amusing side effect of the Permanent Item Glitch. Held items just kinda float off and do their own thing.

Is this glitch easy to set up?

Well, it depends. It’s got some tricky elements, but generally it’s much easier than say, Memory Storage is.

Can I do [some idea] with this glitch active?

Depends. You could probably get through Hyrule Castle or the Yiga Clan Hideout without losing it. And you could defeat overworld bosses with it.

But stuff like the Blight battles have cutscenes breaking them up, so you’d have to set up the view thing after the cutscene too.

Does the Permanent Item glitch have other neat effects?

Yes. They’re listed here in the spreadsheet about the glitch.