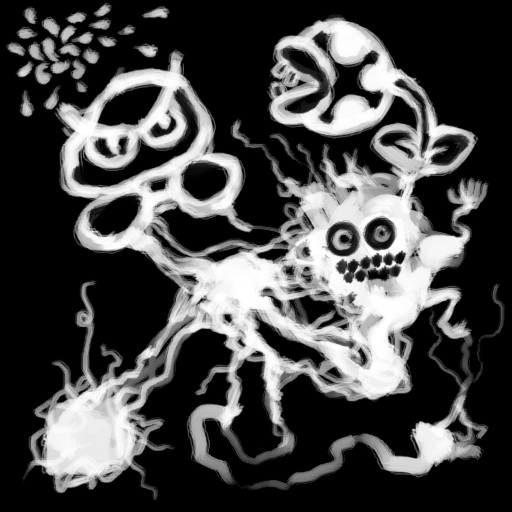 As quite a few Nintendo fans now know, there have been an awful lot of cool things found hidden in the files for their classic games.  Arwings in The Legend of Zelda Ocarina of Time, Yoshi Eggs and Blarggs in Super Mario 64, a whole train system that never got used in Super Mario Sunshine… to some degree it seems like the beta versions of the games are more interesting in terms of content and game mechanics than the ones we actually got to play!

But that’s only the well known stuff.  Oh sure, you know about the original game over screen in Luigi’s Mansion.  Or the unused enemies in Super Mario Sunshine.  But did you know that Mario was going to be playavle in Luigi’s Mansion as well?  Or that Wario Land 4 has a whole unused song with full lyrics and an extremely cool tone to it?  We didn’t think so, and with that said, here are six more interesting things hidden away in Mario games.  Hope you find them interesting!

6. Whacka was a Paper Mario Enemy

But did you know that he was meant to attack the player?  That presumably, if you attacked him too much, he’d get angry and attempt to kill Mario and co?

Yes really.  Behold, some interesting tattles for him that people have found hidden away in the original Paper Mario game:

This is a Whacka. That Bump on his head looks like a donut hole.

You probably shouldn’t have hit him so much. He looks a little peeved.

What’s more, these weren’t found with all the ‘character’ tattles (so not overworld ones), but were located in the area reserved for enemy descriptions.  So yes, he really was intended to be an enemy at one point.

It’s an interesting idea, but it got canned for unknown reasons.  Perhaps Whacka being all defensive would justify a player’s decision to attack them?

Think Hotel Mario was bad enough as it is?  Well, you’re wrong.  Not only did the foreign language versions of the cutscenes suck badly enough to make the English ones look competent by comparison, but the beta versions actually made even THEM like good as well!  Have a listen to Mario and Luigi’s French voices…

Pretty bad huh?  Well, it gets worse in the beta.  Behold the early version of Mario and Luigi’s conversation after defeating Roy:

Above: Charles Martinet?  Nah, this is how Mario and Luigi should sound!

Or for something worse than that… here’s not at all Mario explaining the game in the most boring monotone you can imagine:

Above: I’m getting paid minimum wage for this… screw it, I’m off for a beer.

Kind of makes you appreciate the actual Hotel Mario voice actors and actresses, doesn’t it?

Remember those from Yoshi’s Island?  The enemies that caused Yoshi to act like he was on a drug trip?

Well, it turns out they were intended to be in Mario Kart Super Circuit too!  They’ve been found in the graphics bank for Sky Garden, and presumably acted like they did back in Yoshi’s Island.  Here are the sprites for them as taken from the game’s files:

Driving while high as a kite Mario?  Seems a bit dangerous if you ask me!

3. Wario Land 4 had Another Song with Lyrics

Namely, a cooler version of the theme played in the Hall of Hieroglyphs, complete with what sounds like Wario snarling in the background.  Here it is:

It takes a while to kick in, but it’s pretty cool when it does.  Time I have forgotten.  Collecting moonstorms as we walk. This guy plays by no rules…

Wait, why wasn’t this used in the finished game?  It suits Wario perfectly!

As I’ve said before, Super Mario Sunshine has a lot of interesting things hidden away in it.  You’ve got a scrapped train system, unused enemies, unknown levels… heck, there’s even an unused comment by Mario about how he needs to get a job!

But did you know that even the textures and pollution maps have interesting things hidden in them?  Yes it’s true!  For instance, that acid in the final boss battle doesn’t use a green acid texture… 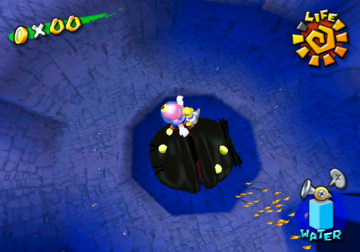 It actually uses this picture from earlier in the game’s development!  So the surface of the acid/water/whatever in the final battle is made up of screenshots showing Mario fighting Eely Mouth in Noki Bay!  Kind of random isn’t it?

But that’s not all.  Oh no, the layouts of the paint ‘maps’ are intriguing too.  While they’re supposed to depict where the paint appears in each level, Nintendo decided it was best not to leave them as purely functional representations of the level geometry.

So we get random pictures showing… well, all kinds of trademark Japanese insanity in the style of a five year old kid’s notebook doodles.  Like this one, showing some Goombas, Piranha Plants and weird Angry Sun like creatures spraying paint around…

Or for something a bit more creepy and abstract… the one used for Bianco Hills actually seems to be some sort of demonic pattern:

Either way, it’s a pretty nice touch for what’s supposed to merely be a guide to where magic paint appears in levels. None of these were meant for anyone but a few bored devs at Nintendo, yet we still get pictures and images that have real effort put into them where a bunch of randomised gibberish would do equally well.  Isn’t that kind of cool?

1. Mario was Meant to be Playable in Luigi’s Mansion

Finally, the thing everyone wanted for years.  It seems like Mario was once intended to be playable in the original Luigi’s Mansion game!

That is at least based on an interesting 3D model here of Mario they found in the game.  Here it is: 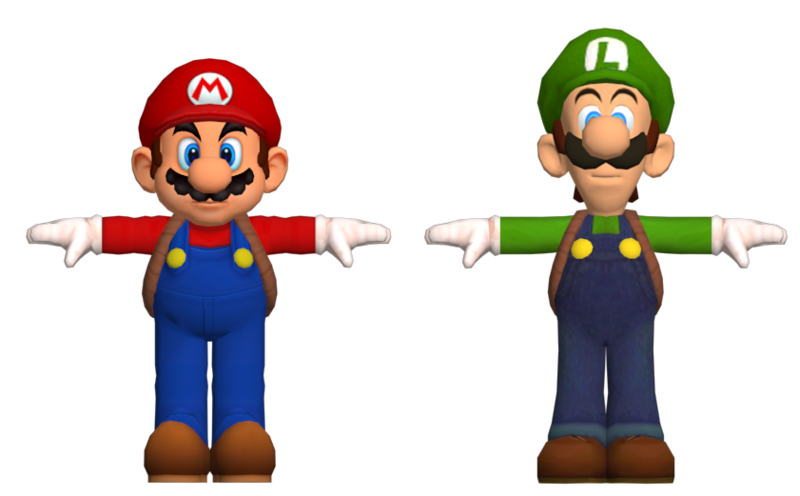 Notice anything interesting?  Yes, it’s got the same ‘dimensions’ as Luigi has.  And what looks like straps for his own Poltergust 2000!

Which seems like pretty good evidence it was meant to be used for a playable version of Mario.  After all, it’s been a rule of thumb that every Mario game with extra playable characters has different sized character models for their playable and NPC appearances.  Remember how Super Mario Galaxy 2’s playable version of Luigi looked very different to the NPC one?

The same could be the case here, with the model being kept the same size as Luigi’s in order to avoid having to tweak of the game engine, level design or object graphics to work with Mario’s own normal dimensions.  Which makes sense, the mansion is a really complex place as far as level geometry goes, and couldn’t easily be adapted to work with a smaller player character.

Also of note is the name ‘bMario’.  That hints that the model could possibly have been meant for a boss battle (like against a possessed version of Mario) or a multiplayer mode where Mario and Luigi either battled or explored the mansion together. Both are pretty exciting prospects given the success of the ScareScraper in Luigi’s Mansion Dark Moon.

So yes, it seems like we were nearly about to get Mario as a playable character in the original Luigi’s Mansion game.  Which is definitely something we all wanted, right?

And that ends the article.  We hope you had fun reading it, and we’ll be interested in seeing your views on this beta content in the comments here or at Talk Nintendo.com’s official topic for the article!

(basically, you should be visiting The Cutting Room Floor wiki more often, cause the stuff they find is awesome)

Dang it every time you mention PM64 and PM:TTYD I always get uber nostalgia :'(
But anyways thanks for the interesting article, these are always fun to read! 😀