Mario Facts Edition Four; Yet More Mario related facts you might not know 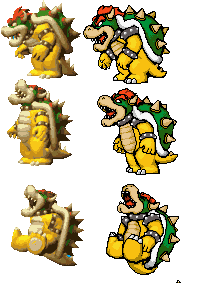 Well, with all the good comments my last few Mario facts and trivia articles got, I thought it was only sane to write another one!  So here are five more semi obscure Mario related facts you might not know!

When a game usually gets recalled, it’s usually due to either ‘adult’ content or some form of major technical issue. Or perhaps in some cases blatant copyright infringement.

But a Mario game getting recalled? Who ever heard of that? Well in fact it actually happened, Mario Party 8 got recalled in the UK due to wording used by a Magikoopa in one of the effect orbs. You see, in the game he says: 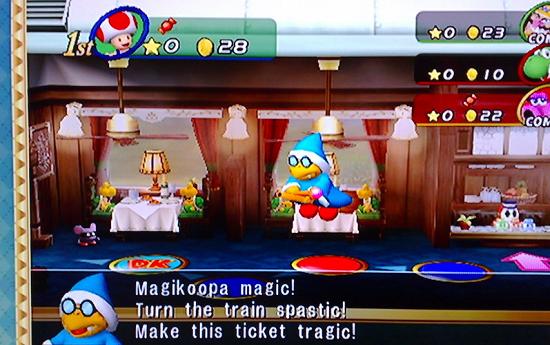 Above: All this for a pointless line?  Why not just say chaotic instead of spastic?  Why such a stupid word?

Now in the US and Japan, this kind of wording is seen as fairly mild and acceptable. Unfortunately, Nintendo didn’t consider that in the UK the word ‘spastic’ is a highly offensive word used for people with psychological issues, and the game ended up being temporarily banned in the country as a result.

So that’s how a Mario Party game (of all things) managed to get banned and recalled in the UK.

If you’ve ever seen any Yoshi’s Island screenshots or videos in your life (or just played it for any amount of time), you may have realised what a visual mess much of the game is and how many sprites seem to be in different styles.

The simple reason here is that the sprites are in different styles, because Artoon got lazy and rotoscoped some of the stuff they drew for Yoshi’s Topsy Turvy/Universal Gravitation. For example, Bowser is just the Bowser model from Topsy Turvy with the colour sucked out and a bit of shading applied. That’s why his Yoshi’s Island DS sprite looks so damn ugly, because it’s just a badly recoloured reshading of a low quality 3D model.

Above: From an ugly model to an ugly sprite, Artoon’s lazyness knows no bounds!

I wouldn’t be surprised if many other sprites were just stuff from other Mario games that’d gone through the same process. After all, wouldn’t it be so easy to just reshade the original Yoshi’s Island graphics? Because I suspect in some cases Artoon had done just that…

No, it’s not the ‘you are the xth Yoshi on Yoshi’s Island’ one that comes up when you beat the game and acts as a death counter of sorts, it’s a random message in another level which manages to perfectly sum up the game in one sentence.

We, the Mario team poured our hearts and souls into creating this game for your entertainment. It is full of secrets. Enjoy!

It may not be much, and it may not even be particularly well hidden, but I’d say it’s the perfect illustration of why Yoshi’s Island and other classic Nintendo games are so fantastic. The developers tried their hardest, put in every possible good idea they had at the time and added all those small touches that make the game feel more like a labour of love rather than just a commercial for hire project.

There’s also two other fairly obscure secret messages as well, like this one from the world 1 castle:

Top Secret – Tell no one. Aim directly at the top right corner!

It’s another little touch that’s completely unrelated to the level, but just a nice bonus for anyone who finds it, with the small hidden room this message is found in having a secret 1-Up cloud in the top right corner.

Finally, the one message everyone knows now:

This is Top Secret, so LISTEN UP! On the Level Selection Screen, hold select and press X, X, Y, B and A!!

As you probably know, it’s the way to unlock those Yoshi vs Bandit battle games to play any time you want, another tiny obscure secret the game never really hints at and that was likely added just to give the game even more entertainment value.

All these messages just make clear how much care and attention was put into just this one SNES game, and how much recent games have lost by making it all about the business side and cookie cut design.

Yes, the most recent Paper Mario game in the series somehow already has a major plothole in it, and one that can’t really be explained away in any simple fashion. You see, part way into the game, Mario talks of Kamek as someone he’s never met before. You know, that guy who tried to kidnap him as a baby in Yoshi’s Island? Well apparently in Sticker Star Mario completely forgets about that and acts like he’s never seen Kamek before. 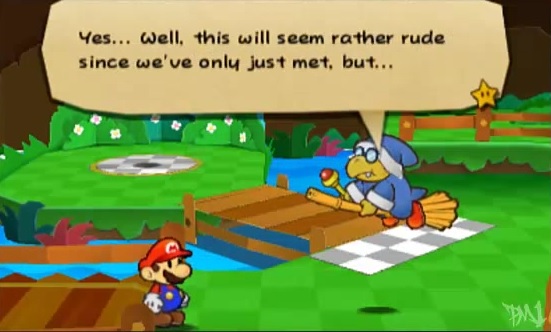 Above: Because someone who repeatedly tried to kill you as a child is easy to forget about.

It gets a bit worse for die hard Mario fans when you realise that there is absolutely no way in hell what Mario says could be accurate. Was Mario too young to remember Yoshi’s Island? Well how about Mario and Luigi Partners in Time, where Kamek is a boss fought in an early level and Baby Mario is somehow intelligent enough to fight back alien invaders?

And even if you consider Paper Mario and the RPGs ‘canonically distinct’ from the main series, it doesn’t add up much there either. Kamek was clearly a boss in Super Mario RPG despite not being labelled as such (there’s a Magikoopa boss who’s psychopath thought talks about the ‘baby’ and who is fought in Bowser’s Castle), and he’s likely to also have been a minor background character in some of the earlier Paper Mario games (it’s said one of the Magikoopas standing beside Bowser in the intro is Kamek).

So it seems Paper Mario Sticker Star has at least one plothole or notable mistake in it. Was it added by the localisation team? An oversight by Intelligent Systems themselves? Who knows.

Ever wondered why Wario Land The Shake Dimension has a poorly designed difficulty curve? Or had trouble with the plant boss Scumflower? Well it turns out there’s actually an interesting reason for much of this.

Apparently, some time in development the whole game was laid out in a very different way and levels were moved around towards the end of the development cycle. And one of these moved levels was Scumflower Skirmish, which in the beta version was actually meant to be used as the fifth boss. Meanwhile, Large Fry was meant to be the third boss and I assume Chortlebot the fourth boss, hence why it seems in game the boss difficulty is so all over the place.

It also explains why Launchpad Labyrinth looked so much like and shared the same music with Stonecarving City. Why? Because in the original version of the game, it was meant to be a world 1 secret level rather than a world 4 one, and was presumably moved because it was seen as too difficult for this part of the game. So it wasn’t really meant to be a jungle level, but was likely just moved there because it was seen as more world 4 difficulty. Here’s how world 1 is laid out in the game files:

As you can clearly see, the layout of world 1 was very, very different in the beta version. Launchpad Labyrinth was one of two secret levels in world 1, a subwarine level (Wavy Waters) was found right at the start of the game this time around and Wreck Train was somehow supposed to be a part of world 1 as well. But Nintendo (or Good Feel) rearranged much of this part way through development and hence left us with the version of Wario Land Shake It we have today.

And for good luck, here’s a final fact that could have led to another Mario Party 8 style recall…

Yes, one of Dimentio’s quotes from Super Paper Mario was changed wholesale to try and avoid causing controversy in the UK. You can probably guess which one, since the replacement text has absolutely no humour in it whatsoever and sounds ridiculously corny to boot, but here it is for good measure:

Dimentio: I think I’ll start with the
green one, he looks like a
pushover.

Now here’s the US version of the same line. Should be pretty obvious why it was changed when the game was released in the UK:

Dimentio: I think I’ll start with the
green one. The shag upon his lip
will make a fine trophy.

Luigi: SHAG?! This mustache is all LUIGI!

Yeah, any British visitors should probably have figured out exactly what word was deemed potentially offensive here. And I don’t think the second line would helped the situation much.

Either way, they changed it to avoid potentially offending parents and the rating board and to avoid the game being recalled like Mario Party 8 later was.

And that concludes another set of interesting Mario facts!  Did you know all these?  Probably not, even some complete Mario experts didn’t know the whole rotoscoping thing that Artoon did, and not all the others are particularly well known either. Still, hope everyone found these Mario facts interesting!