Beyond the Edge of Reality; Exploring the World Outside Breath of the Wild’s Trial of the Sword

Beyond the Edge of Reality; Exploring the World Outside Breath of the Wild’s Trial of the Sword

Back in the first DLC expansion for the Legend of Zelda Breath of the Wild, a new challenge dungeon called the Trial of the Sword was added to the game. Including [number] of floors where players have to defeat all the enemies present to progress, the area is basically BoTW’s equivalent to the Savage Labyrinth or Cave of Ordeals from the prior games, with all the setup that implies.

Yet despite all this, one thing we never got to see here was exactly where this trial takes place. Where are the rooms located on the map? How do they connect together? What exactly is beyond those walls?

For the most part, it was impossible to tell. And despite the bomb clipping glitch giving us a very small hint about the matter, it too didn’t offer too many thorough answers here. That’s because bomb clipping drops us through the floor, and the only thing down there is an endless ocean with no practical way back to the surface. 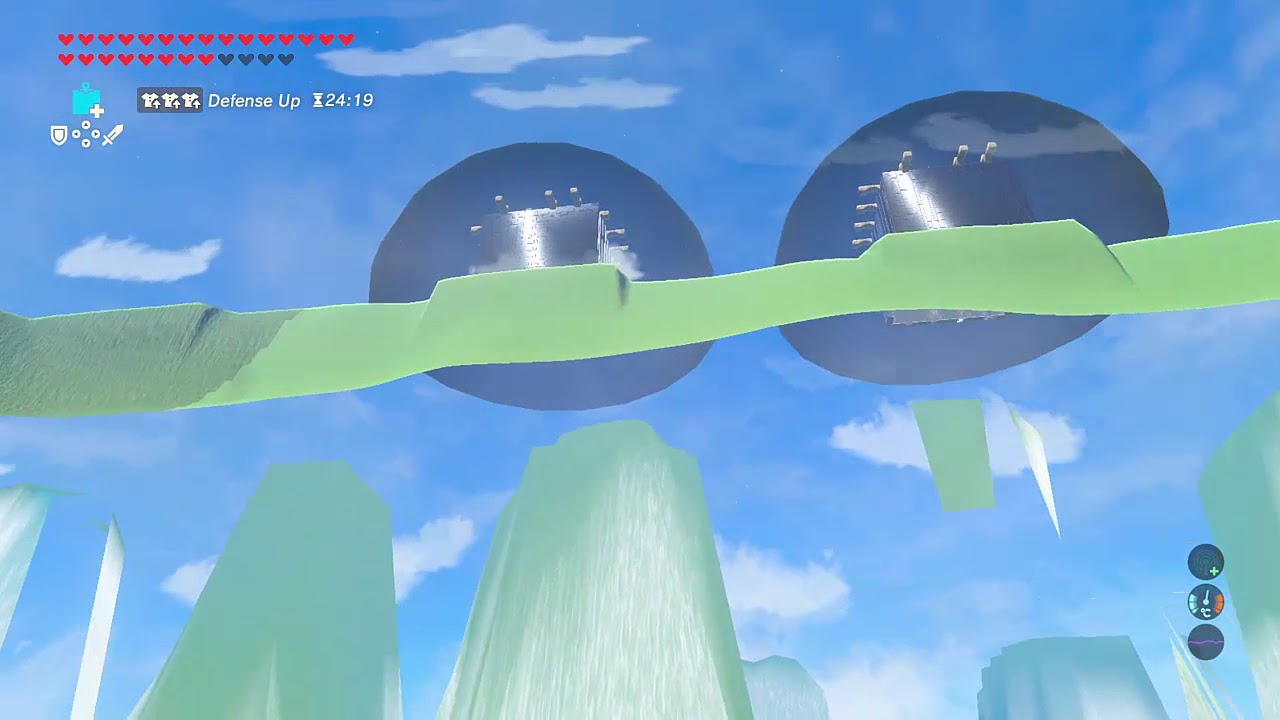 But thanks to a new glitch, that’s all solved. Yep, a new way has to be found that lets you clip out of bounds in the Trial of the Sword, and this one keeps you on ground level. How does it work?

Well, you know those small boxes you can move with Magnesis?

Yeah, if one is launched at you quickly enough, then it’ll often knock you straight through thin walls and objects. This means that by building up energy with Stasis and then standing in front of the box as it blasts forward, Link can get sent hurtling through the Trial’s walls and out of bounds.

Here’s a short video showing the glitch in action: 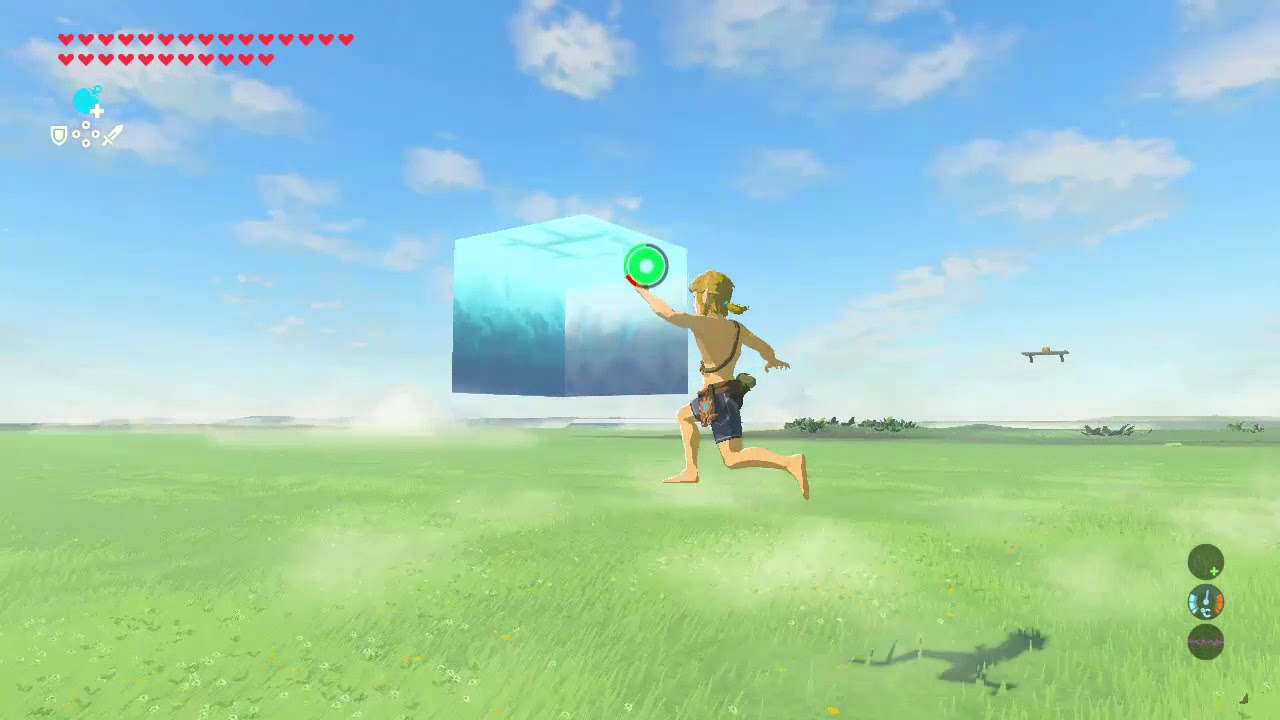 As well as another showing how it can be used to skip to the end of the first part of the trial: 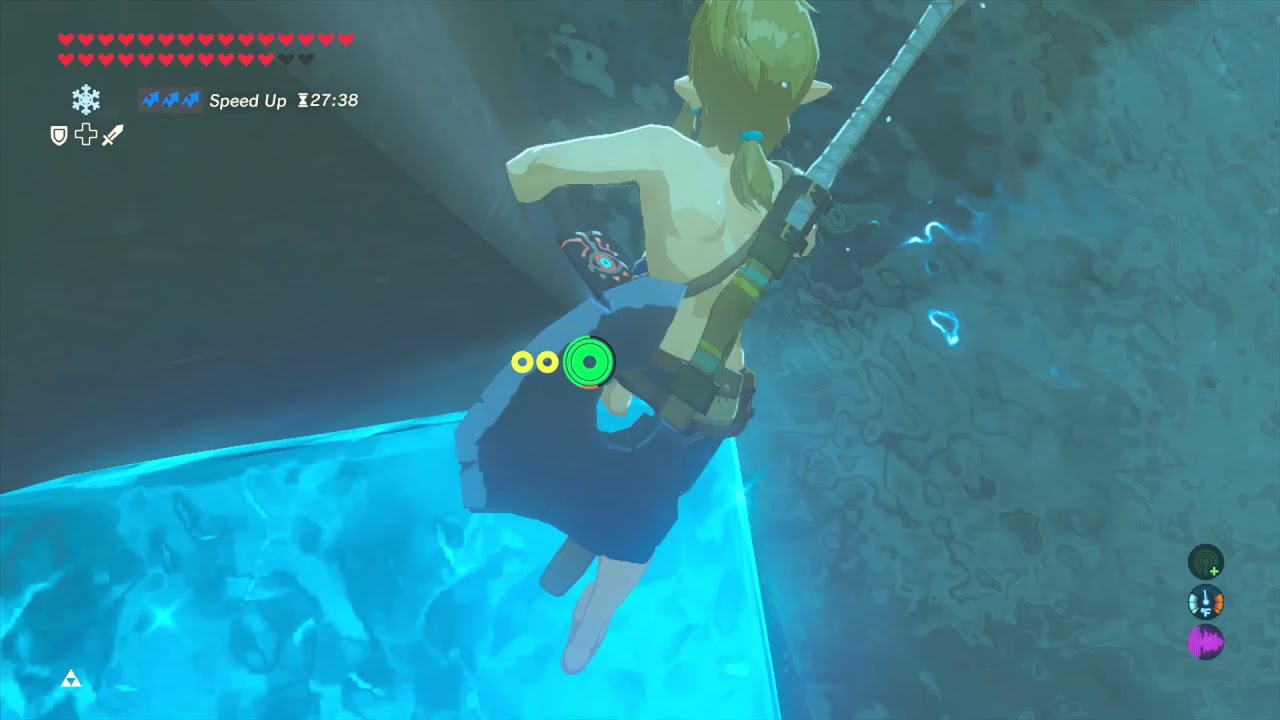 Which obviously breaks the speedrunning scene for this ‘bonus area’ wide open. What previously took hours now takes mere minutes, with most of the rooms being completely pointless as a result.

Yet as neat as all that is, it’s not what we’re talking about today. Oh no, we’re interested in what else is outside those walls. What kind of ‘world’ the trial actually takes place in.

And as it turns out, the answer is ‘a damn huge field you can explore at your own leisure’. Seriously, this place is enormous, and with the exception of the trial rooms in huge cubes, virtually empty and lifeless to boot. Indeed, it may well be about as big as the normal world map for the game, just far flatter and lacking in buildings or varied terrain. 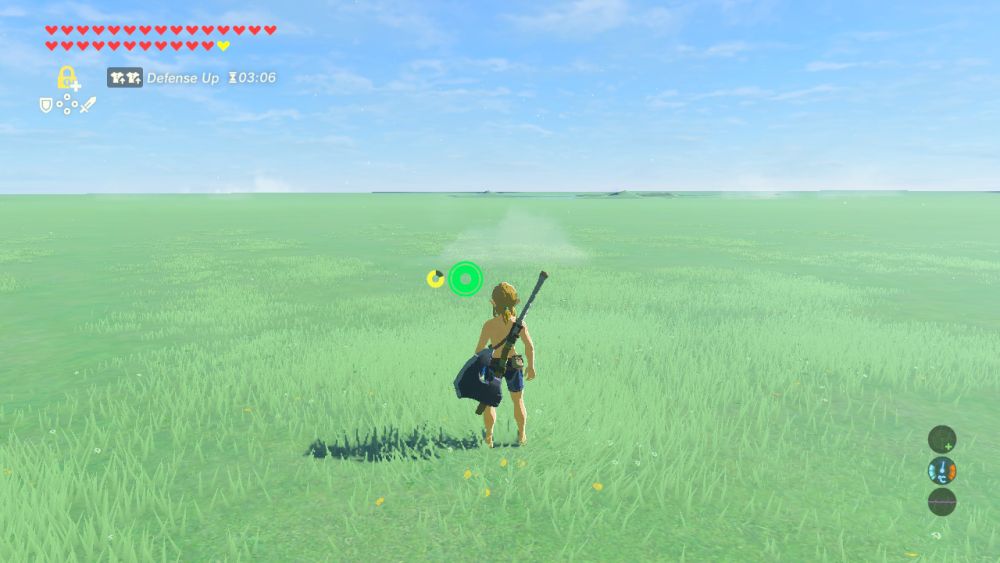 The open world of the Trial of the Sword

That said, there’s still stuff to find here. Like the fact the main area is actually set on a giant cliff overlooking an equally large lower continent: 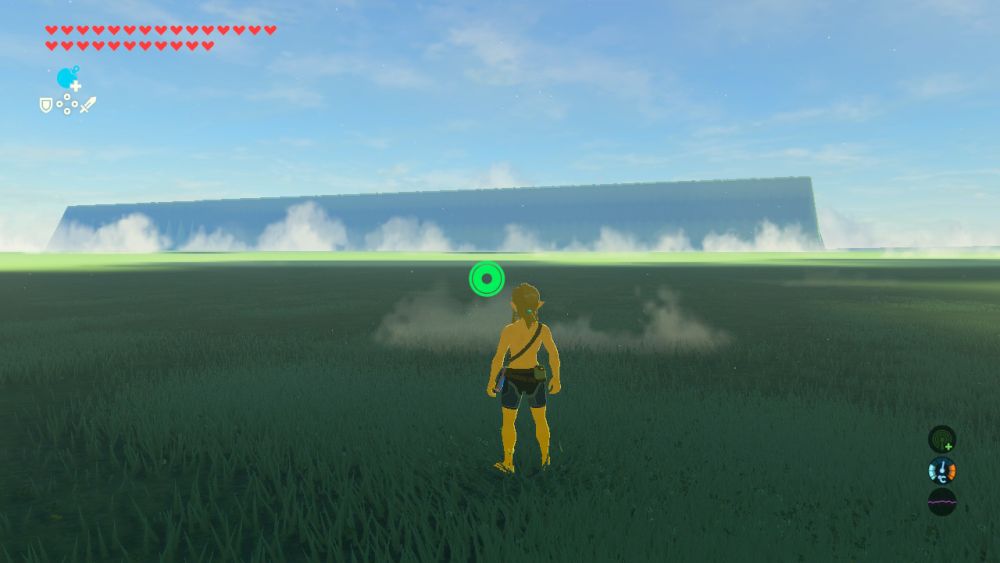 The continent the trial rooms are located on, viewed from the world below

Or how the area with the Monks at the end is actually located at one of the edges of said cliff, and fades in as you enter: 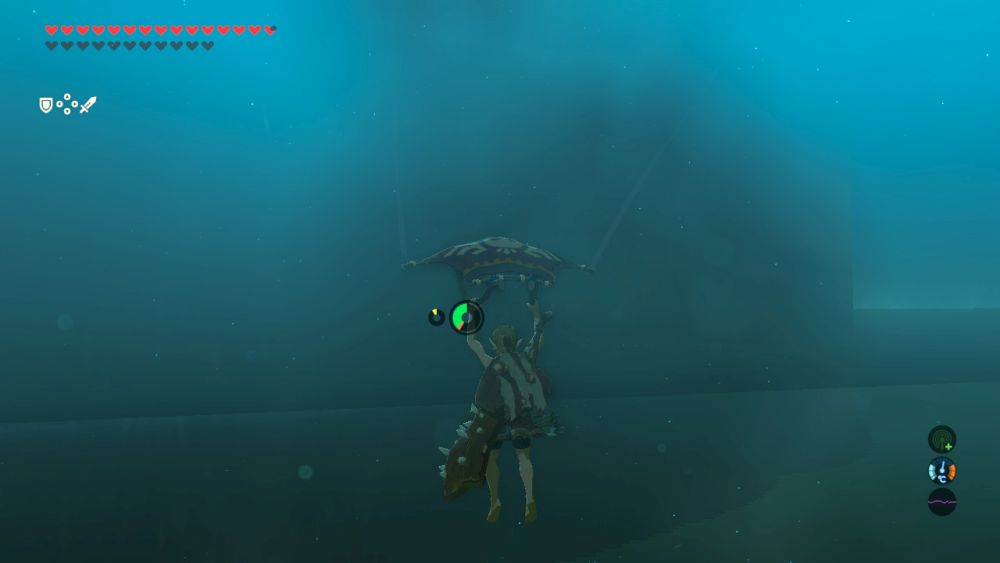 The Monks room is just off the edge of the map

If you do go to the lower level however, you’ll find some oddities there too. Like the water which quite literally comes above ground level at the edge of the world…

Or if you go far enough, water/void that softlocks the game altogether. In this stuff, Link doesn’t swim or glide, he just floats regardless of how much stamina he has left. It’s pretty strange to be honest. 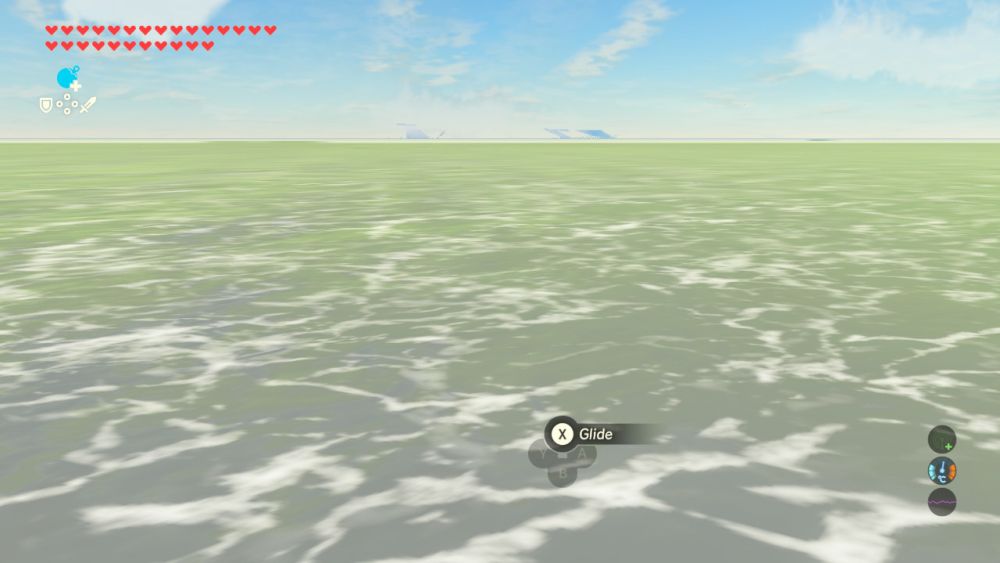 Going too far gets you stuck in this endless sea

It’s also interesting to see how the different environments were pulled off for the trial rooms too. For instance, the wind rooms are actually all floating above a giant chasm in the landscape: 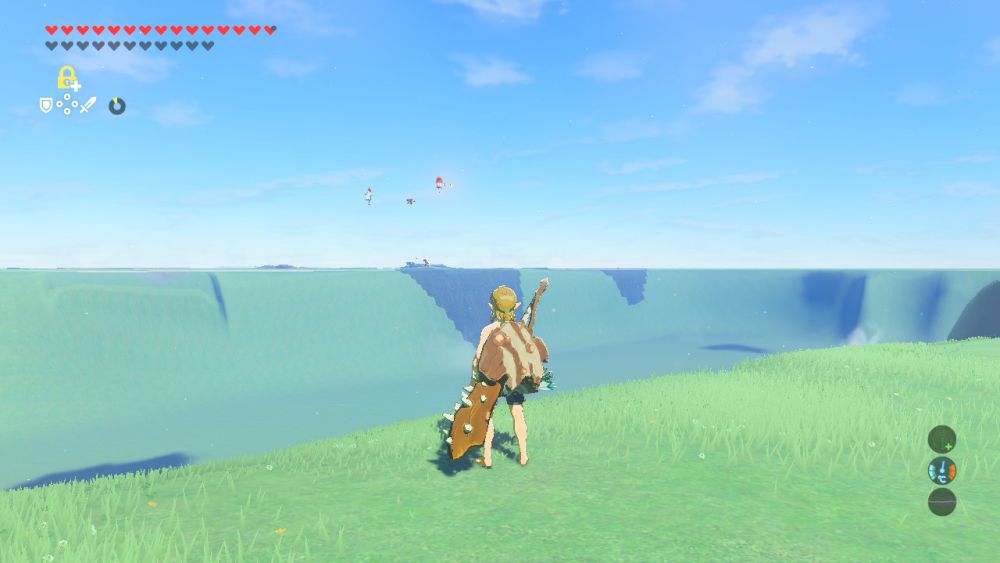 The wind rooms float above an abyss

Whereas the stormy ones actually have localised weather which only kicks in when you approach, sort of like the Thundra Plateau in the Tabantha region: 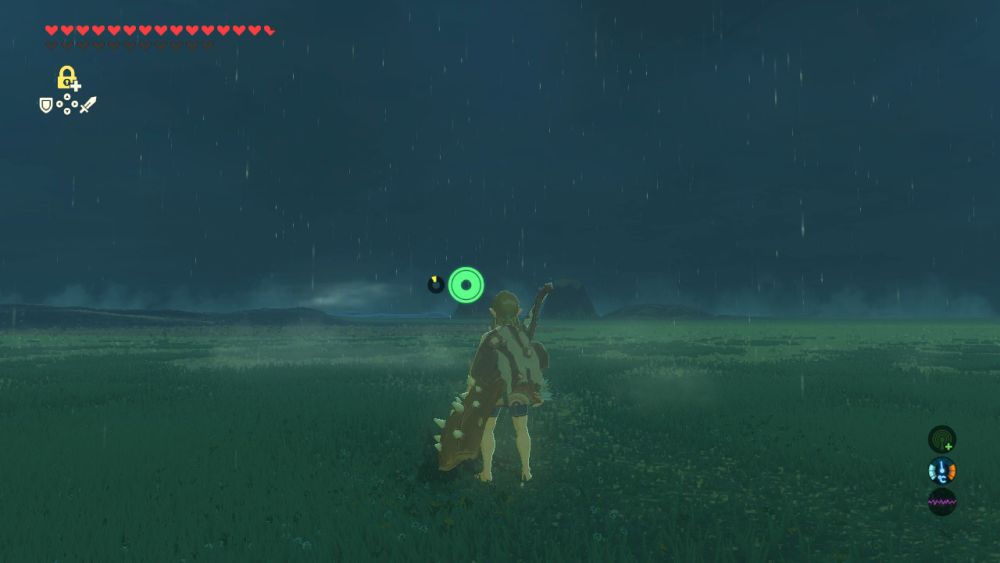 Storms are local and start only in certain areas

Same goes for the freezing cold and boiling hot temperatures of the lava and snow rooms. It’s very local, and changes without warning.

There’s also a fake ‘wall’ around certain rooms, to give the illusion of a void outside the main cube. This isn’t solid, and acts like a very weird curtain. 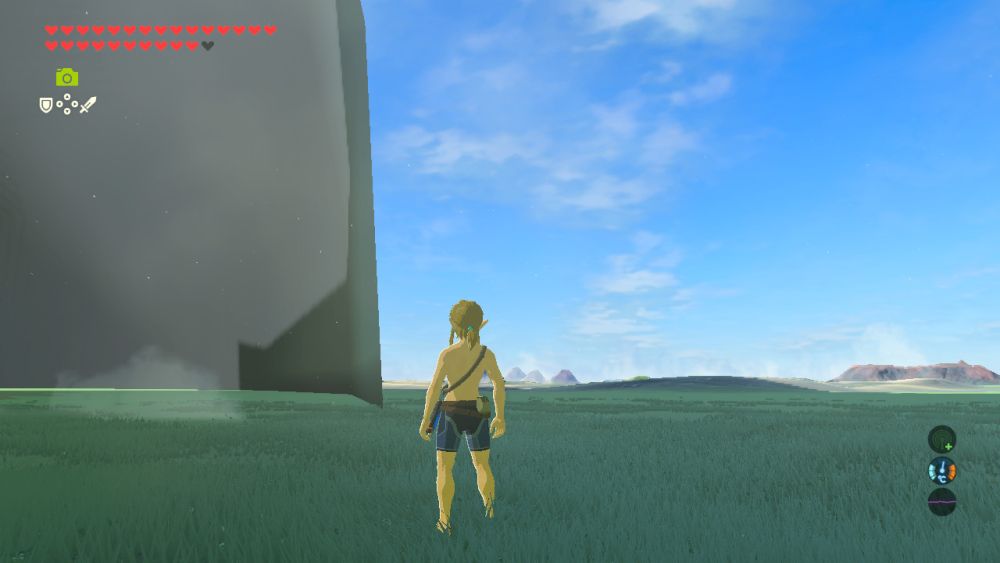 A ‘curtain surrounds certain rooms’. Like the the end of Super Mario Bros 3 level!

Still, enough about the local environment for a bit. How are these rooms laid out anyway?

Well, as it turns out, mostly on a grid going from one side of the continent to the other. Here’s a map drawn up by a user called Swiffy22 on the Breath of the Wild speedrunning Discord server: 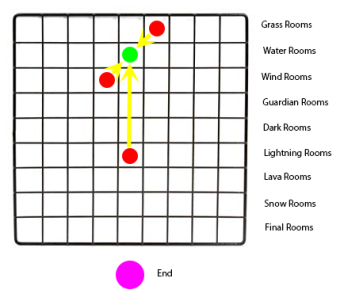 Obviously the initial grass rooms at one edge of the map, and the aforementioned Monks chamber is off the edge of the cliff at the opposite end. Then in between you’ve got the water rooms, the wind rooms (aka the chasm), the Guardian rooms, then dark rooms, lightning rooms, lava rooms and snow rooms, all prior to the final ones at the very end.

They’re surprisingly close too, which means that not only are the floors not really floors, but they’re not really separate from one another too. If the walls didn’t exist, you could walk to the final part of the trial in a matter of minutes.

And unlike with most rooms in this trial, you can actually get back into that one. So if you’re really bored and want to spend a few hours throwing bombs at a Lynel and a Guardian Turret (since your weak floor 1 weapons ain’t gonna do sod all against them), go right ahead. It’s possible at least. 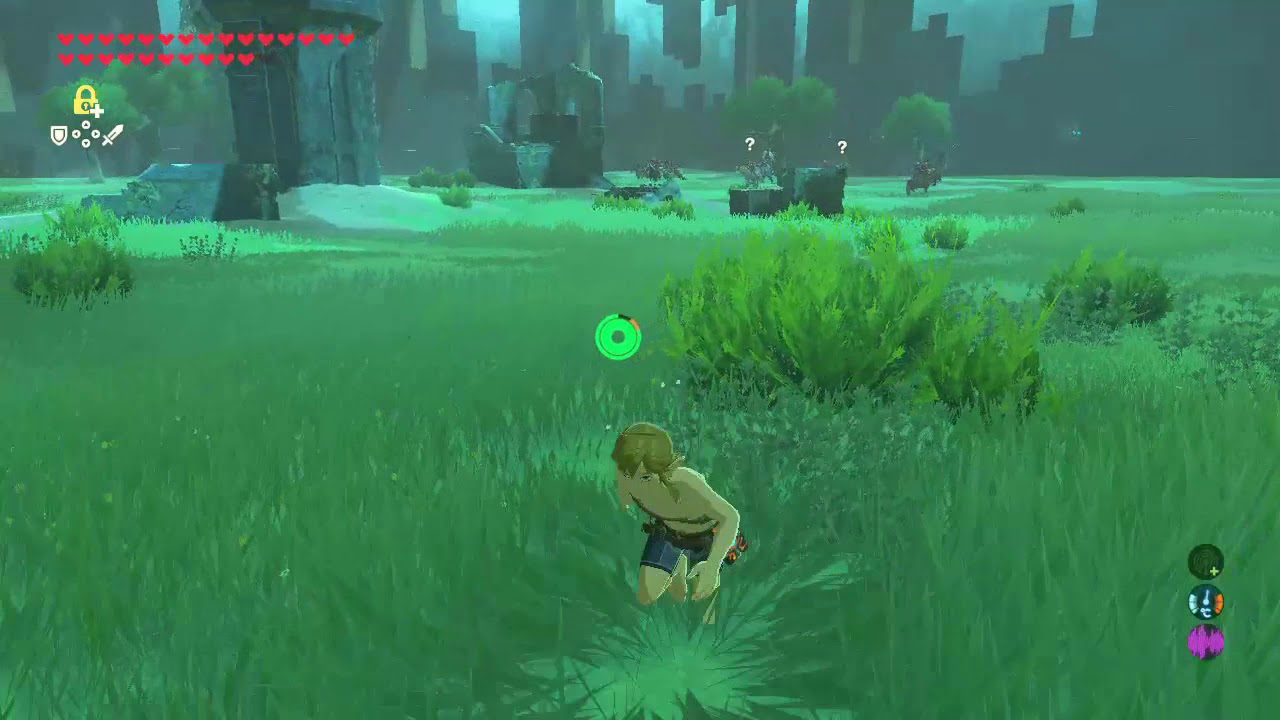 But it’s not a good idea. Unfortunately for bored people looking to skip to the end, the reward you get for beating the trial does not depend on the room you last beat, but the part of the trial you entered at the start. So unless you pick the final trial part, beating the final floor will merely give you the level 1 or level 2 upgrade for the Master Sword rather than the fully upgraded version.

So if you’re after a skip, you may as well stick to fighting the Hinox on all three floors instead. It’s quicker and your hair will probably remain intact afterwards. 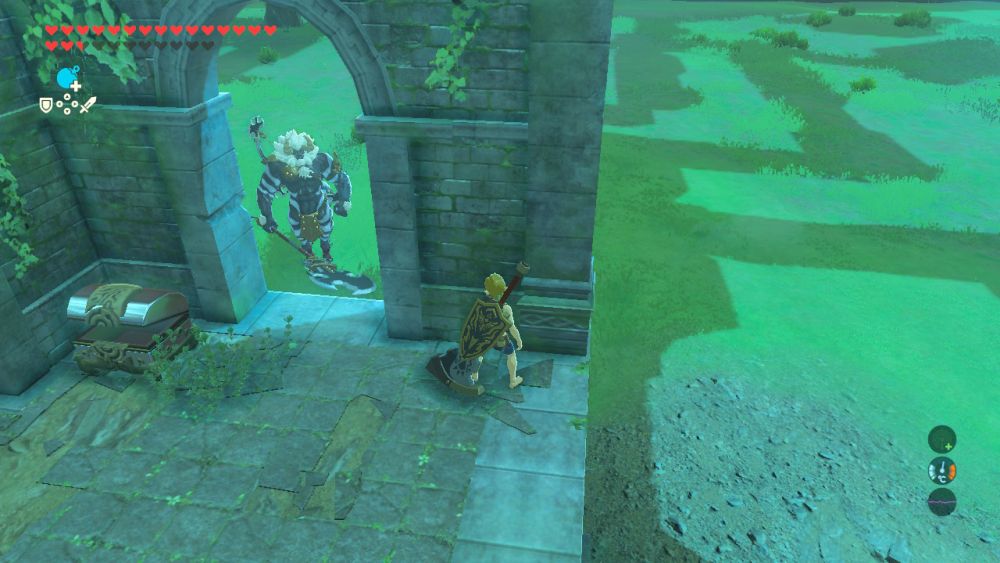 You do not want to be in this situation

Either way, that’s all I could find out of bounds in this area. There may be more past the waters surrounding the landscape, but given its weird physical properties in this area, it’s unlikely anyone will be able to find out without hacking the game.

Still, what do you think? Did you find it interesting to see how this otherwise inaccessible location was set up? What discoveries have you made with the Trial of the Sword out of bounds glitch?

Tell us about them in the comments below or over on the Gaming Latest forums today!