Ever since the game’s launch in 2017, there have been two ‘impossible’ glitches fans have wanted found in the Legend of Zelda Breath of the Wild. These are a way to get the glider early or skip it altogether, and a way to keep the Bow of Light outside the final boss battle without hacking.

They’re the holy grails of Breath of the Wild speedrunning, and things that everyone wants found at some point or another.

Yet nothing ever got found that made them possible. There were no glitches found to duplicate Spirit Orbs or get the glider in your inventory early, nor a way to bring back NPCs in the Dark Beast Ganon fight or let you take the bow to a new file.

It was a huge shame, and meant that the game’s potential was still many miles away from being unlocked.

At least, until now.

Because now things have changed. Now a new glitch has been found that makes both these things possible once and for all.

A glitch that will change the Legend of Zelda Breath of the Wild forever.

And this glitch is known as Memory Storage. Found by glitch hunter and YouTuber LegendofLinkk a few days ago, the glitch involves manipulating the menu in such a way that you can access parts of it during gameplay, and trick the game into interrupting events or carrying data across save files.

With the end result being that you can now set up a ‘New Game +’ file with any items or clothing you ever wanted to use. It’s an insane discovery that makes no end of amazing challenge runs possible, and one that completely changes how you play the game overall.

Here’s a video tutorial for the glitch: 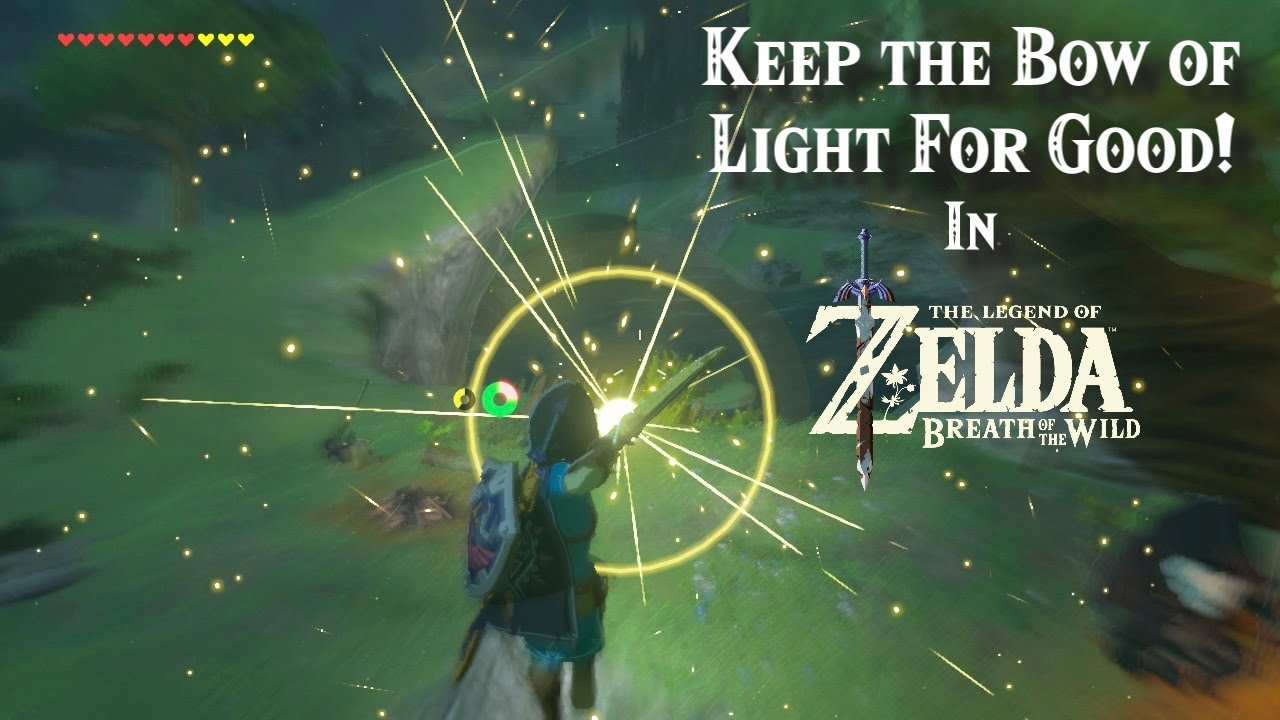 But if you want a text based one, keep reading! Let’s get that Bow of Light!

If you have this stuff, then you’re ready to set up the glitch involved, known as Memory Storage. You can do this by:

Once that’s done, you’ll then need to set up the actual Bow of Light/file transfer setup. This comes in multiple parts, so read carefully:

If done correctly, you’ll notice the game never auto saves. If this is the case, then congratulations you’ve set up the glitched file correctly.

But now comes the tough part. Put simply, you’ll need to do everything else here without ever saving, loading a save, quitting the game or dying. In other words, it’s time for a no death challenge, that you pretty much have to do in one sitting.

Regardless, you then need to do the following steps: 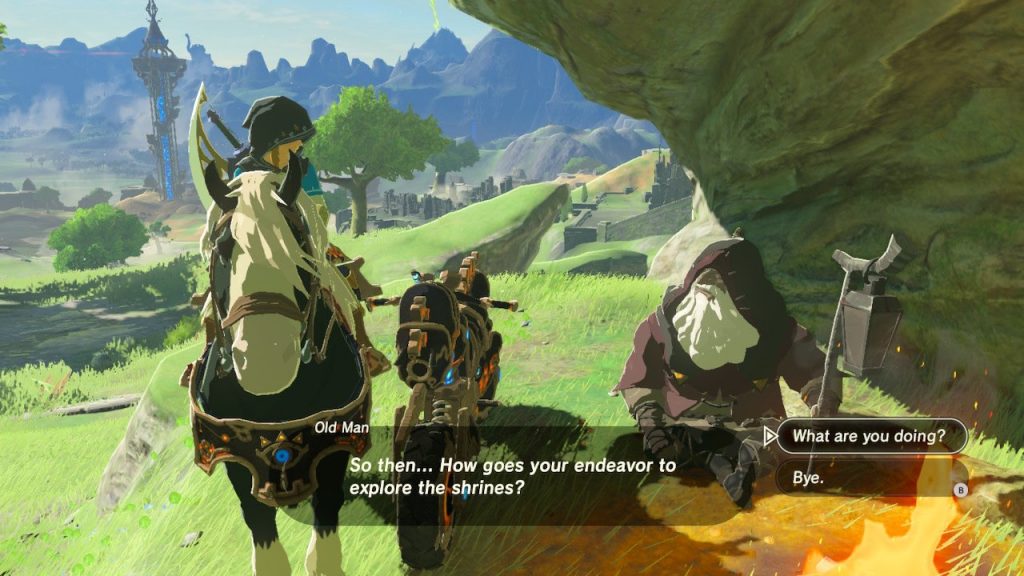 If done correctly, your equipment will carry over to a new save file, allowing you to set up situations like this one

By doing this, you’ll have the Bow of Light and paraglider on your new save file, along with any other equipment you had before.

But keeping the Bow of Light and skipping the Great Plateau aren’t all this glitch allows.

No, it has quite a few other interesting uses too.

Most notably, the fact you now literally bring any item to a new save file. Want a fully powered Master Sword in the early game? Feel like a few Champion abilities may be handy early on? Want Link to use his traditional clothing for the whole game, ala Hyrule Warriors?

Well now you can! Thanks to Memory Storage, all manner of challenge runs are now possible in Breath of the Wild, with more neat effects that you can ever imagine! It really is the biggest game change since wrong warping, and something that will seriously shake up the way the game works overall.

It’s also potentially a method to duplicate items too. Yeah, it’s a slow one, since the setup requires getting the item normally every time.

But it’s a proven one nonetheless, and can allow such interesting effects as getting multiple copies of one off pieces (like the Champion’s Tunic or Zora Armour), duplicating Korok seeds or getting extra copies of one off weapons.

Admittedly, you can’t copy everything this way. Hearts and stamina upgrades aren’t carried over here, so you’ll need Apparatus Storage for that one. And you can’t warp into shrines or jump through the sky like with Wrong Warping.

Yet for the most part it’s an awesome find, and one which finally lets us do what we’ve always wanted to.

So try the glitch yourself, and have fun copying your favourite items and armour to a new save file, or blitzing through Hyrule with the Bow of Light. It’s the discovery everyone’s been waiting for!

Thanks to LegendofLinkk for discovering the glitch and helping with this tutorial, and thanks to the people on the Gaming Reinvented Discord server for their help in getting it working. You can find links to this stuff in the sources section below.

If you need more help, we’ve prepared an FAQ here:

When I try and do memory storage, the memory menu vanishes immediately. Why?

What if I don’t see the menu, but the memory list comes up when I press +?

Then same thing. You’ve took too long to press A after pressing right.

Why is my sidequest unselected?

Because your D-Pad right press wasn’t registered properly. In other words, you pressed right too early, and it only counted the A press.

Why do I need to stand in front of a cooking pot?

Because when you do so, the game automatically has your menu open on the ingredients page. By doing this, you can switch to the file select menu with the load memory promot still on screen.

If you don’t do this on the other hand… it’ll be open on the memory listing screen, and you’ll have no choice but to watch the memory or cancel.

How do I select a file in this situation?

Press down/up past the end of the memory dialogue. It’s weird, but it basically acts like this:

Once I start my new game, how do I know it worked properly?

Easy, the game won’t save at any point. If you see the word ‘saving’ appear on the screen at any time, that means you screwed up.

Why do I need to fight Dark Beast Ganon?

Because it sets a bunch of flags once you defeat it, that tricks the game into giving you back your inventory despite seemingly losing all progress up to that point.

Why do I need to watch a memory cutscene during the battle?

To re enable saving afterwards. Otherwise your new file will also be in this weird glitched state.

If that happens, what now?

Well I guess you could always play through again, get a memory cutscene again, and do the glitch right this time. I mean, it should act like the relevant setup file anyway.

Do I need the DLC for this?

Yes, because the Travel Medallion is required for the glitch.

Is this all I can do with memory storage?

Oh hell no. LegendofLinkk has posted dozens of videos showing wacky side effects caused by this glitch and its uses in different situations.

Are there any other things I need to watch out for in my new game setup file?

Well obviously you don’t want to watch a memory outside of the Dark Beast Ganon fight, since that will re enable saving. And apparently getting or using the camera rune may break the glitch too.

What about warping, opening the inventory, voiding out, etc?

None of those disable the glitch. You can open any menus you want, cook food, equip/unequip clothing and weapons, fall in lava/bottomless pits if you have enough hearts to survive, get lost in the Lost Woods, use amiibo, etc. It’s all fine.

Why does this glitch work at all?

On a technical level, we don’t know. The one guy on the speedrunning server who’s trying to disassemble/analyse BoTW’s code (Leotlino) is completely clueless about why this is happening, and occasionally refers to it as ‘black magic’.

If we had to give a guess though… we’d say memory cancelling somehow overrides the flag the game usually sets to enable autosaves, so it doesn’t save your progress through the new game as expected. Then, once you beat Dark Beast Ganon, some more flags are set saying you beat the game/are in postgame mode, but the game doesn’t know where to put you since it was never saved up to that point. So it starts a new save file with the relevant postgame flags set, and reloading after that saves somehow brings over your stuff from the previous ‘attempt’.

So why do you need to unequip the Bow of Light?

If I had to hazard a guess, the game wants to take away the Bow of Light after beating Ganon. But it does that by taking away whatever bow you had equipped when the final light arrow hits Ganon instead, not whatever item in your inventory matches the Bow of Light’s ID. Or something like that.

It’s like with Mini Game Storage and the One-Hit Obliterator. Because the game assumes you have it equipped at all times, it takes away your currently equipped weapon when you leave the Great Plateau, not the item that actually matches the Obliterator’s ID. Hence why the Forest Dweller’s Sword vanishes into thin air instead.

What things carry over to the new game + file?

Basically your inventory. So your weapons, bows, shields, armour sets, key items (including Champion Abilities) and the flag that says you’ve got the glider and can leave the Great Plateau.

Your hearts, stamina and completed quests do not seem to carry over.

Can you get copies of items with this glitch?

Apparently so. All items are still obtainable in their original locations, even if copies of them were carried over. This means duplicate DLC armour sets, Hylian Shields, Korok Seeds, etc are possible here.

Do you keep your transferred items after turning off the game?

Yes. You keep them forever. So no worries, you’ll still have the Bow of Light unless you decide to delete the save file.

Is this glitch worth using?

Honestly, that’s a good question. If you’re a challenge run creator or YouTuber, then the answer is probably yes, since it allows for so many wacky video ideas if you can get it working.

But it’s also such a frustrating glitch to get working, and one with such a long setup that we’re not sure everyone is going to enjoy the game after doing so. The timing for the memory menu thing is fiddly, the timing for viewing the memory as the file loads is fiddly, it’s easy to mess up, and if you do so that’s potentially 6,8,10, maybe even 50 hours down the drain.

So we really apologise to anyone who tries this and struggles for hours on end. It’s a miserable glitch to set up, and one that’s gonna cause no manner of grief to some of our viewers.