The Booster Course Pass is a well priced, simple bit of DLC that adds hours of fun to Mario Kart 8 Deluxe

A few days ago, Nintendo released the first wave of content for the Mario Kart 8 Deluxe Booster Course Pass. Featuring 8 new courses remastered from games like Mario Kart Tour, it promised to shake up the game like never before, bringing back interest in the game from players old and new.

So that made us wonder… does it really live up to the hype? Are these ported tracks a worthwhile addition to the game, or a quick cash grab Nintendo released at the last minute?

Well to be honest, it’s complicated. And it’s complicated because at its core, the Mario Kart 8 Deluxe Booster Course Pass is not like the previous DLC the game got. Nor for that matter, like the DLC that most Nintendo games get in general.

With the key difference being it’s a quantity over quality approach that’s very unusual for the company. It’s not a small amount of super high quality content at a matching level of detail to the original game like the Wii U version’s DLC, nor is it like Pokemon Sword and Shield or Zelda Breath of the Wild where the DLC is literally a continuation of the main game with a few gaps filled in. 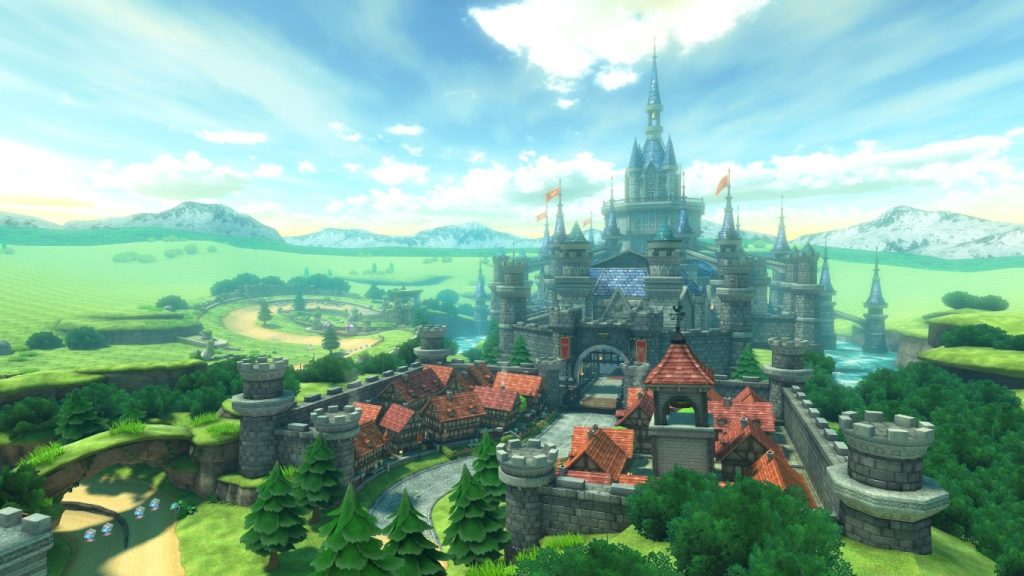 Instead, the Booster Course Pass is the very definition of cheap and cheerful. It’s a crap ton of tracks, somewhat upscaled from Mario Kart Tour, added to Mario Kart 8 Deluxe for a low price. It’s like if Nintendo made Odyssey DLC where you had 17 new kingdoms ported directly from Mario Sunshine/Galaxy/3D World with a few Odyssey elements added in. Or if Luigi’s Mansion 3 got the entirety of the second game’s ScareScraper thrown in, just with a tiny bit of remastering and a few elements from 3 added here and there.

Either way, let’s talk those aesthetics. Do they stack up?

On the one hand, these new tracks certainly don’t look anywhere near as good as the original game’s ones. The grass is very plasticy and basic looking, the trees and pushes look straight from the 3D Land/World era, and the scaling of the tracks themselves isn’t super optimal either. It’s very clear you’re looking at levels from Tour that had a few tweaks thrown in, and it’s a major visual downgrade from the masterpiece that is the main title.

Additionally, the visually consistency is also rather bad between the DLC tracks too. Indeed, despite these tracks all featuring in the same update for the same game, you’ve got plenty of examples of simple objects and textures looking completely different on each one. A tree might look one way on Paris Promenade and another way on Toad Circuit, and the same goes with things like fences, rocks, bushes, etc. It’s completely inconsistent in every way, and makes it look like the courses were ported from entirely different games at times. 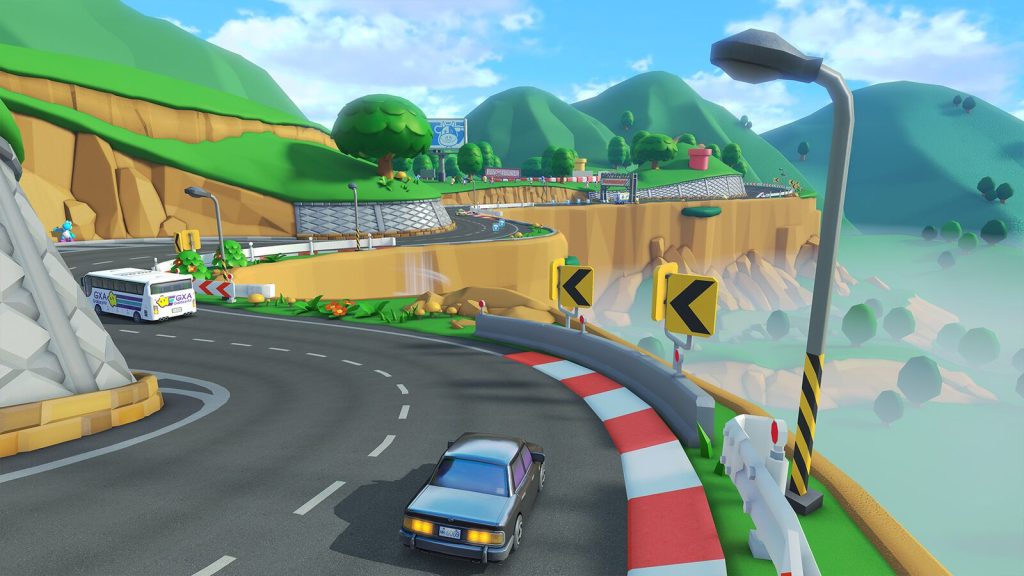 Still, the effect isn’t as noticeable when racing as it is in still screenshots, since at 150 (or even 200cc), you probably won’t be paying much attention to the grass and trees. It’s just when you slow down that things look a bit janky and uneven.

And the music is at least as good as ever too. Thanks to (what we assume) are the same band responsible for the main game’s soundtrack, each and every DLC track has an amazing modern cover that really makes the song pop. Paris Promenade, Choco Mountain, Coconut Mall, Shroom Ridge… they’ve all got incredible songs that could fit straight in the main game, and it really helps the mood overall. You can see some of our favourites here: 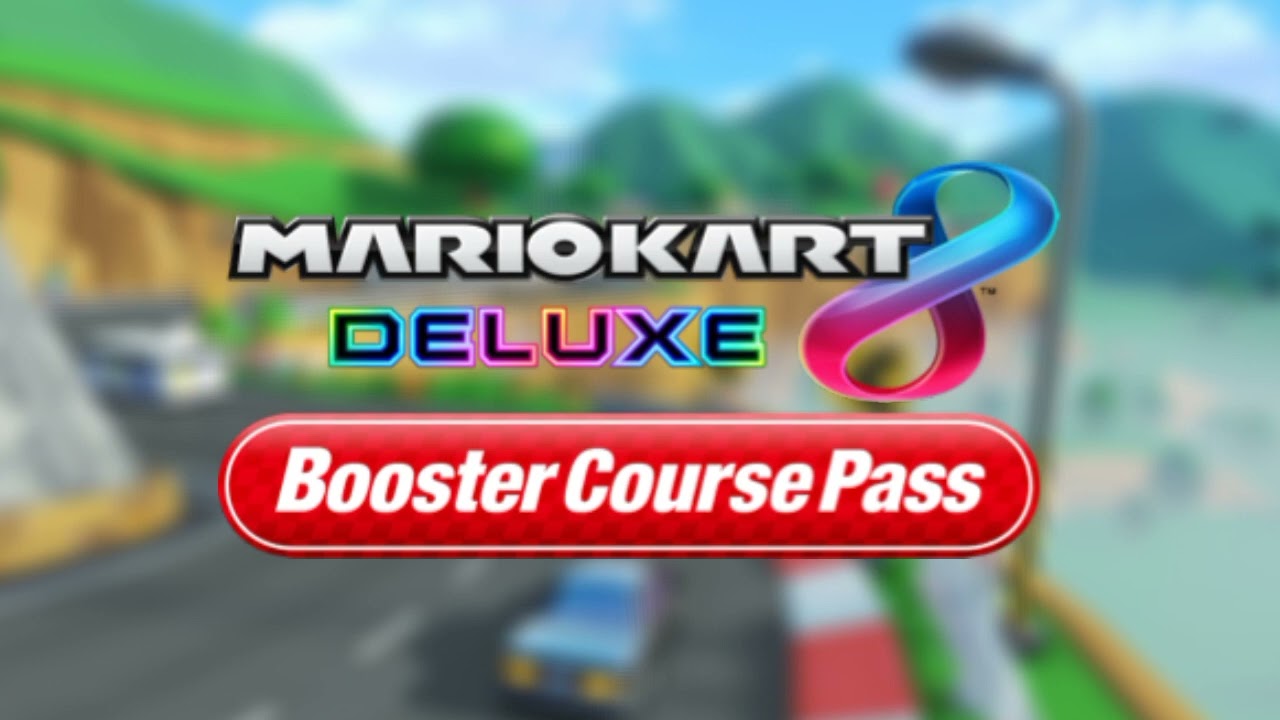 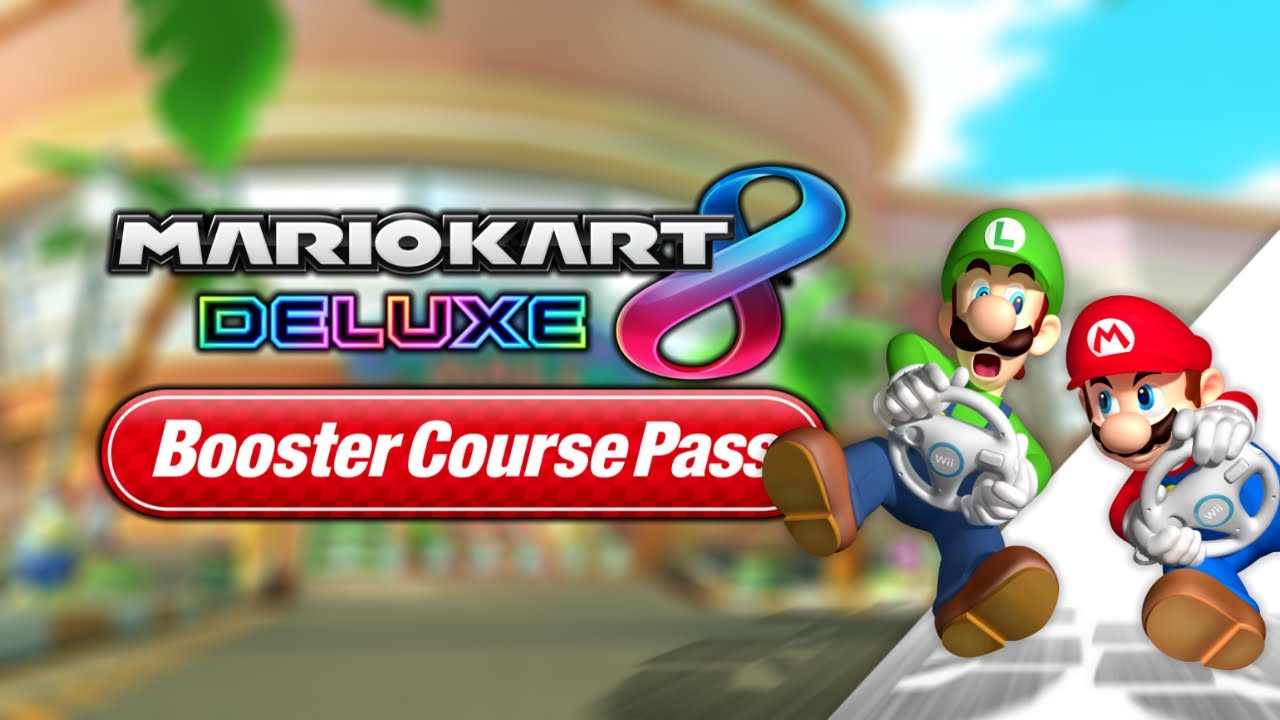 Regardless, aesthetics are merely window dressing at the end of the day. It doesn’t matter how nice the graphics are or how well done the soudtrack is if the gameplay itself isn’t up to the par.

Since almost all the tracks in this selection are amazingly fun to play, with incredibly interesting level designs. You’ve got amazing renditions of classic tracks like Choco Mountain, Sky Garden, Coconut Mall and Shroom Ridge…

The city tracks from Tour are the best they’ve ever been, with different routes actually opening up every single lap…

Well that’s genuinely one of the best tracks we’ve ever seen in a Mario Kart game. With multiple different routes at every junction, amazing theming with ninja Shy Guys and an eastern temple style and all manner of clever traps and obstacles, the level is an absolute masterpiece of course design, and one of the best tracks the series has ever seen period. 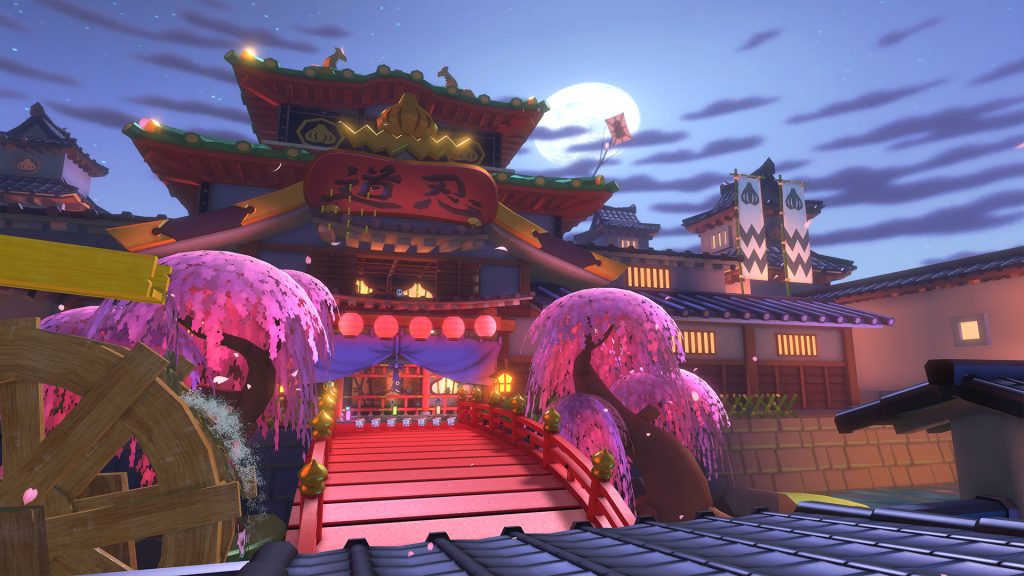 This is one of the best courses in Mario Kart history

It really might be better than many of the tracks from the base game, and with the high standard of quality in Mario Kart 8 already, that’s really saying something.

So as far as track design and core gameplay goes, they really nail everything here.

But there are a few things that feel amiss nonnetheless.

For instance, despite being the main draw of Mario Kart 8 Deluxe (and even featured in the advertising for the DLC pack), the anti gravity mechanics from the base game are totally lacking here. 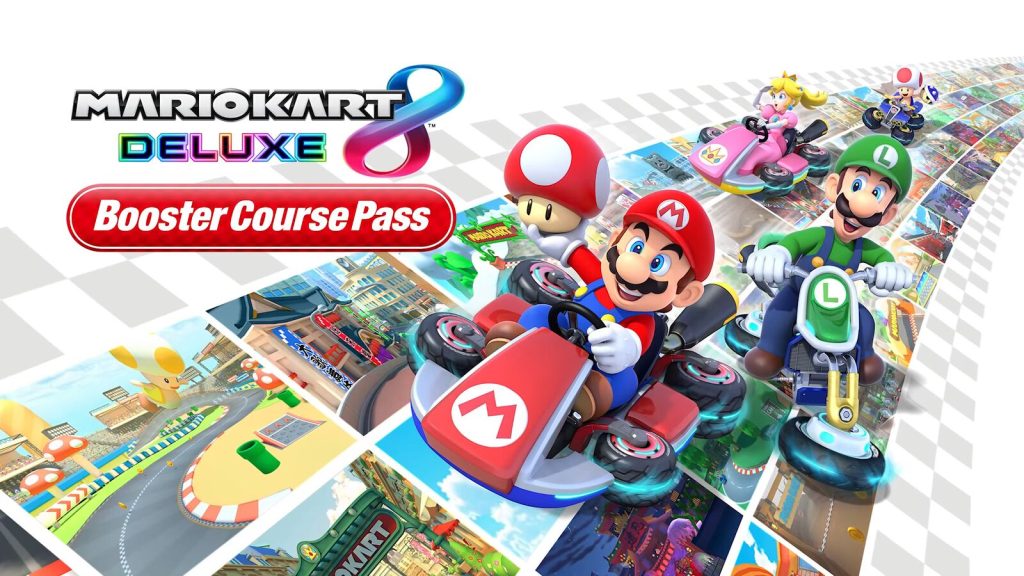 Why is anti gravity shown on the banner when the new tracks don’t use it?

With absolutely none of the new tracks using it at all. That’s not too surprising where the likes of Toad Circuit or the Tour city tracks are concerned, but it is a let down for some of the others, especially ones like Choco Mountain, Coconut Mall and Ninja Hideaway where such mechanics could be integrated quite nicely.

Additionally, there are also some sloppy design changes in general too. Tracks have corners cut out where they’ve been simplified for Tour, some parts are a bit tight/awkwardly designed due to the lesser number of players in said game, and things have often been scaled up or down in weird ways too. It’s not game breaking by any means, and you’ll mostly ignore it regardless, but it does show a lack of attention to detail that’s uncharismatic of Nintendo as a company. 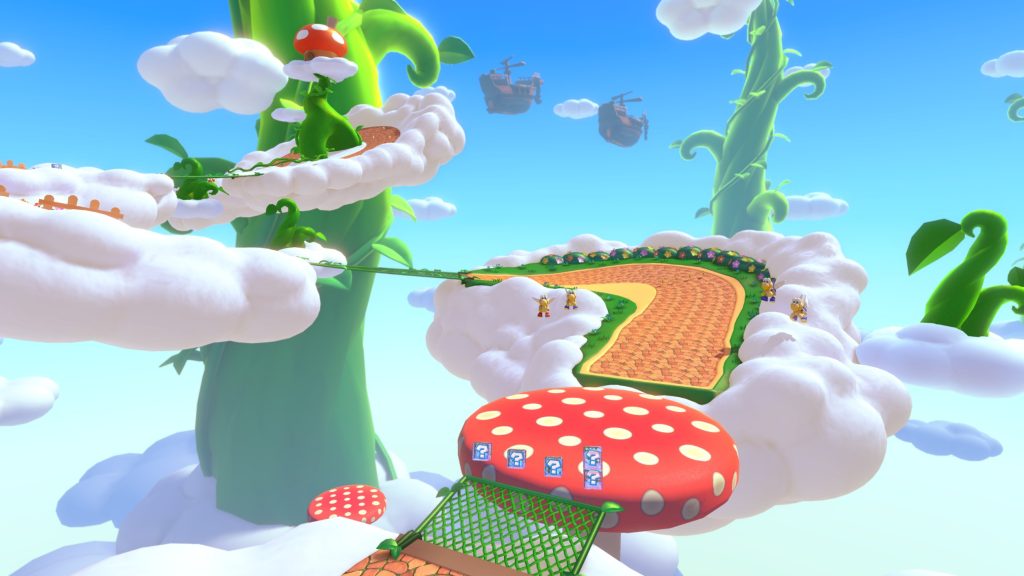 Still, all of our complaints are minor, especially when stacked up against the insane value for money the Booster Course Pass offers. Why?

Because as mentioned in the original article, this DLC (as in all 48 tracks worth it), costs a combined total of £22.49.

Yep, that’s less than £23 for 48 new tracks, or about 47p per track. For that price, virtually anything would be acceptable, especially given the total isn’t much higher than that for the Luigi’s Mansion 3 DLC, the Breath of the Wild DLC or the Age of Calamity DLC, all of which offer far less bang for your buck.

So all in all, the Mario Kart 8 Deluxe Booster Course Pass is a worthy purchase, and a great way to extend Mario Kart 8 Deluxe’s lifespan even further than ever before. It’s not as technically impressive as the base game by any means, but it’s an amazing deal for the amount you spend, and with some of the best tracks in the entire series, something that we’re sure every Mario Kart fan is going to want to pick up immediately.