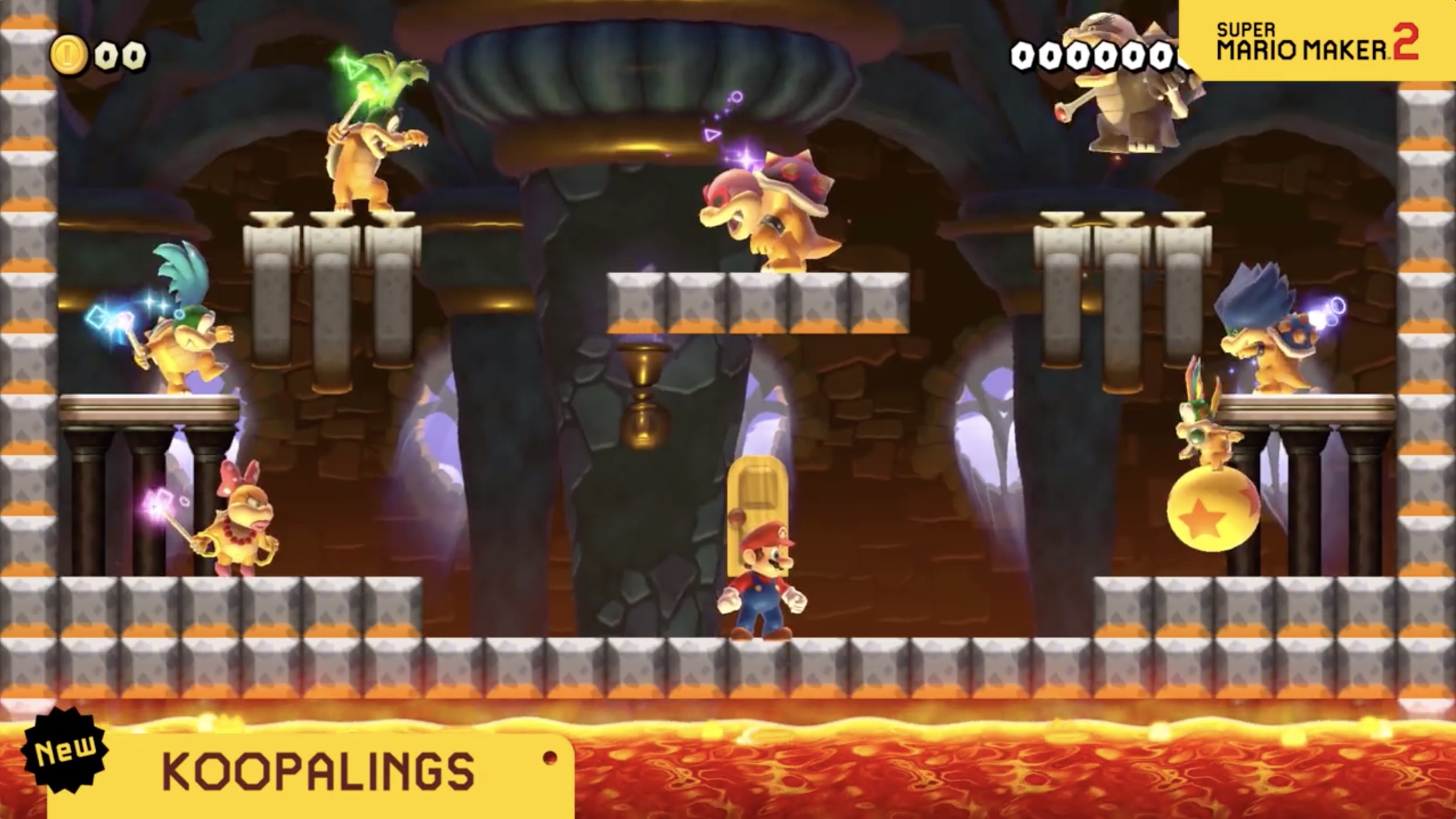 Well, this is a pleasant surprise isn’t it? Right out of nowhere, Nintendo has announced that Super Mario Maker 2 is going to receive a new update tomorrow, complete with numerous new course mechanics and gameplay elements to liven up levels for the game.

Here’s the trailer showing all the new additions in action:

As you can tell, there’s a lot of interesting stuff here, so we’ll have to go through it piece by piece.

First (and perhaps most importantly), levels don’t have to be standalone experiences anymore. Nope, just like in tools such as Lunar Magic, Super Mario Bros X and Reggie, you’ll now be able create your own world maps and place levels along the paths there too, letting you tie your levels together in a more cohesive way.

It’s going to be a great feature, and one that’ll add many more interesting customisation options to the game.

However, it’s not the only addition this update will bring. Oh no, the game is also getting some new course parts too.

Of course, given this is Nintendo, the Koopalings aren’t just going to be clones of each other like in SMB 3. You won’t merely be dodging the same magic blasts while avoiding the odd ground pound.

No, you’ll be contending with their unique attacks and abilities too. For instance, Wendy and Lemmy will shoot their ring and ball projectiles from every past game, Morton will attempt to ground pound the player, Roy will attack from the ceiling and Ludwig will flutter around like in New Super Mario Bros Wii.

This means boss battles will be a bit more exciting than before, and you won’t be stuck recreating the bland encounters from New Super Mario Bros Wii or 2.

Mechakoopas are also going to be heading to Mario Maker 2 in this update as well. These robots will behave exactly the way they do in Super Mario World and the NSMB series, and retain their properties as projectiles in boss battles as well.

No, like with many other returning enemies added to the game over the years, the Mechakoopas in Super Mario Maker 2 will get some interesting new variants as well.

Like red ones that shoot homing missiles, and blue ones that can blast everything with giant lasers. They’re pretty neat additions, and they’re going to be make for plenty of interesting stages further down the line.

Caption: Funnily enough, a Super Mario World hack called The Mario actually beat Nintendo to the laser Mechakoopas by more than a decade!

Finally, there are also going to be new powerups for Mario and company to mess around with too.

Or at least, mostly like it did in Super Mario Bros 3 anyhow. While the limited movement on land and increased control in water will make an expected return, the suit is also going to get a new ability for its Super Mario Maker 2 comeback.

Namely, the ability to let players run on water while using it!

Yep, just like the Mini Mushrooms in past games, the Frog Suit will now give characters walk on water abilities too. It’s a neat addition, and one that’s going to really make this powerup more useful in future levels.

However, the Frog Suit won’t be the only forgotten powerup to make a comeback.

No, the P-Balloon from Super Mario World is set to make its return too. This time, it’ll not only let characters float through the air normally, but also charge in any direction in the air too, greatly aiding their maneuverability in the process.

Other returning powerups will include the Boomerang Flower from Super Mario 3D Land and World, and the Flying Squirrel Suit from New Super Mario Bros U, both of which will retain the same abilities from said games.

Of course, non traditional powerups are also returning too, such as the cannon blocks, propeller blocks and other mask-like items from Super Mario 3D World.

These will let you do all sorts of things, like jump high into the air, shoot missiles or blend in with foes.

And that’s just the existing ones making a return.

Cause in addition to those, Nintendo is also adding some new variations to the game as well. Like a POW block that Mario and co can wear to defeat enemies and activate blocks from afar. Or a Bullet Bill helmet, which lets players soar through the air horizontally, like Jet Wario from the first Wario Land game:

But then there’s the most interesting powerup addition of the day. The one no one ever saw coming.

This item will have a very unique effect when grabbed. Namely, it’ll let characters ride on, pick up and carry enemies and objects!

Which in turn means they’ll basically get their moveset from Super Mario Bros 2 back, with all the neat physics that brings.

And that’s going to be a lot more exciting than you’ll likely give it credit for.

Since Nintendo have really integrated this moveset into the game’s existing objects.

Hence now players will be able to do things like pick up and carry Chain Chomps by the post (and use them to attack enemies), or ride on top of Bullet Bills to cross large gaps.

It’s going to be an amazing addition, and one which will present an almost endless array of possibilities for creative level designs.

So check out all the new features and additions in the trailer above, then get ready to use them in your new levels when this update launches tomorrow on April 22nd 2020!