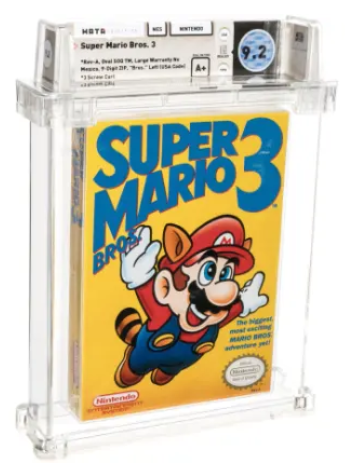 How would you like to suddenly make $156,000? One lucky person did by selling a very old, very rare and very vintage Super Mario Bros 3 cartridge for the NES. Which why did this rare copy of Super Mario Bros. 3 sell for so big? Well the box and game comes from an early production run that saw the “Bros.” in the logo aligned to the left rather than the right that most are used to seeing it.

“Copies of this game with ‘Bros.’ formatted to the left on the front of the box (on top of Mario’s glove) are very rarely found in sealed condition, and many collectors have been on the lookout for years, but often come up dry,” the Heritage Auctions listing reads. “When a sealed copy does come along, it brings a hefty premium compared to the later ‘right Bros.’ version, as this version is considerably more rare [sic].”

The highest-priced “right Bros.” to go through Heritage Auctions sold for a measly $21,600 in September of this year, just for an idea of what kind of difference a little logo adjustment can make.

So what do you think GR readers? Do you have some old game that could fetch a lot? Do you wish you were the seller of this game? Let us know below, on the forum or in the discord!