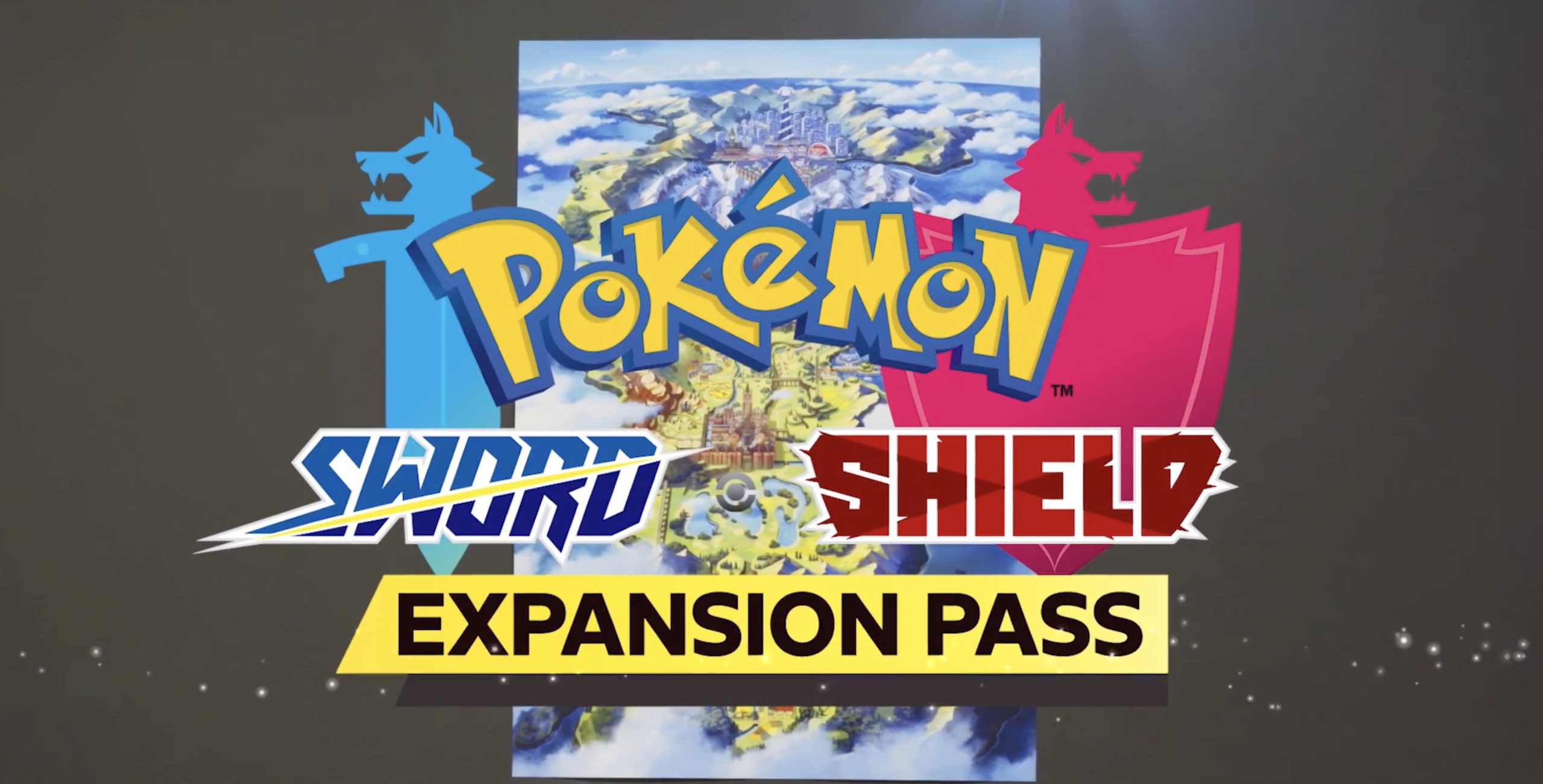 The main reveal however (and the focus of about 80% of the video) was the Expansion Pass for Pokemon Sword and Shield. A two part DLC pack for the games, this $30 add on is apparently going to add new major new ‘chapters’ to the game, under the names ‘Isle of Armour’ and ‘The Crown Tundra’ respectively.

Here’s the Pokemon Direct video showing them in action:

As you can see, they’re pretty expansive add ons overall. You’ve got new locations with entirely new areas to explore and characters to meet, new Pokemon to encounter (including new legendaries) plus what seems like an entirely new story to experience in each one, with the focus being on ‘Growth’ and ‘Exploration’.

What’s more, they’re also apparently new wild areas too. Yep, both the island and tundra are both new wild areas played in the same way as the open world area in the main game, complete with visible Pokemon of different levels, a 3D Zelda style camera and Max Raid battles. It’s a good setup, especially given the positive reception the original Wild Area received from fans and critics.

You’ll also get to explore them on the same save file too. This means that unlike third games from generations past, you’ll be able to stick with your current trainer and team for the new stories and events. An interesting change, though one that may make game balance kinda difficult if you’ve got a level 100 team just waiting to go.

Still, it’s not the world or mechanics that most people are interested here. No, it’s the Pokemon, and boy howdy do these two expansions add a lot there.

Because not only are there are new Pokemon entirely that are available in them, but 200 more from the older games will return too. This means that slowly but surely, Dexit is being undone and the Pokemon left out when the National Dex was cut seem to be gradually getting brought back into generation 7.

And you won’t even need the expansions to use them. Nope, while the new story content and locations are locked behind a paywall, the actual Pokemon and forms included there are not. So anyone with the original games can get any Pokemon from the DLC by asking people online to trade it to them. Or potentially from other events and giveaways in future.

This is also the case for any new Pokemon or forms added by the DLC, like the legendaries announced for it, or the new Gigantamax forms it introduces.

So there’s no paywall for the actual Pokemon here. That’s at least better than how the likes of Black and White 2 or Ultra Sun and Ultra Moon did things.

Speaking of new Pokemon and forms though, let’s look at some shall we? Starting with the new legendaries that play a large part in each ‘chapter’:

Starting with a very special evolutionary line found on the Isle of Armour. The first member of this family is a cute panda like fighter called Kubfu, who apparently comes from a faraway land. It’s a serious Fighting type that’s extremely dedicated to its training, and which evolves into Urshifu when the time is right.

Which in turn has two different forms based on ‘the choices you’ll make throughout your adventure’. These are the Single Strike Style (a Fighting/Dark one) and the Rapid Strike Style (with a Fighting/Water typing), both of which share the Unseen Fist ability and the ability to Gigantamax.

Not much is given away about these forms, but based on past precedent, it’s almost certainly they’re going to be powerful in terms of stats and movesets. The lore on the official site certainly makes them out to be after all!

> In this form, Urshifu looks ready to bellow in fury. People call it both “the very embodiment of rage” and “a divine emissary that banishes evil spirits with its fury.”

> In this form, Urshifu will quietly maintain its stance with a calm expression. When facing this Pokémon, it seems some will become greatly agitated, feeling as if the very depths of their soul have been exposed. Yet others report feeling a sense of relief, as if they’d been cleansed of evil spirits.

So those are the main spotlight Pokemon in the Isle of Armour area.

But obviously they’re not the only ones overall, and both the Isle of Armour and Crown Tundra introduce a few other interesting arrivals too.

Like Calyrex, the main spotlight Pokemon for the latter. This is a kingly deer like Pokemon with a grass crown, complete with the appropriate Psychic/Grass typing to go with it.

And given its lore suggests it ruled Galar in ancient times, it seems like it’ll be quite the fighter too. Shame about the Unnerve ability though!

Meanwhile the concept art in the background of the Direct video quietly revealed two new members of the Regi group too. These golems seem to be Electric and Dark themed respectively, though we don’t know for sure given their limited focus in the video.

Here are some bits of artwork showing them in action:

Whatever they are, they look interesting, and make us believe the Regis will play a major part in or both DLC chapters somehow.

Yet the Regis aren’t the only returning legendaries to get new members or forms. No, the legendary birds from the first generation did too, this time getting entirely new forms with what appear to be different typing. Here are some pictures showing Articuno, Zapdos and Moltres’ new forms respectively:

Seems like each DLC chapter may focus on a certain previous gen legendary trio, and either expand it with new members or add new forms respectively.

Of course, legendaries aren’t the only ones to get form updates here. Nope, Slowpoke and co will too.

With the evolutionary items required to evolve it into its later forms being found on the Isle of Armour and Crown Tundra respectively. It’s unknown exactly how they’ll work, but it’s a neat setup nonetheless, and gives players a bit more of a choice in what form to take than before.

However, we don’t really have any good artwork of the latter too. Instead, here’s the official art for Galarian Slowpoke itself from the official site:

As well as another interesting detail about its role in the games. Basically, Galarian Slowpoke is being used as a free promo for the Sword and Shield DLC.

Which means that right now, you can go and get one of your own, and meet the new rival characters from the DLC pass in the process. Not sure how useful it’ll be right now, but it’s something.

Meanwhile outside of the ‘new location specific’ list but still being added to the game, we get three new Gigantamax forms that are coming to the games soon. These are Gigantamax forms for the starter evolutions from the region, with some… interesting designs and concepts.

There’s Rillaboom, who goes from having one set of drums to an entire drum set when he becomes a giant:

Cinderace, who’s fiery football becomes an enormous sun like orb of fire, and who rides it around like Lemmy Koopa in the Mario series:

And Inteleon, who ends up using his tail as a sniper platform, complete with what seems like a magical rifle:

It’s an interesting set to say the least, and border between awesome and goofy as hell at the same time.

But it’s not just the Galarian starters getting these forms either. No, the last two Kantonian ones are getting them too.

Which should relieve a few fans, given Charizard’s spotlight stealing role in the first few trailers and base game. For a fair old while, people were actually convinced he’d be the only Kanto starter evolution to get a Gigantamax form at all, and were taking said form’s existence as proof of favouritism towards him by Game Freak.

Yet this doesn’t seem to be the case now. Nope, Venusaur and Blastoise are getting them too, likely with similarly interesting attacks and abilities to Charizard’s one.

Regardless, onto the new characters now, since the additional Pokemon aren’t the only ones being added into the games via the DLC.

Since a few humans have been shown off too. These include the strangely named Mustard, who acts as your mentor on the Isle of Armour:

Plus your new rivals, Klara and Avery. They certainly seem to continue the trend of modern gen rivals being visually distinct, don’t they?

We’ve just got to hope they’ve got the actual battling chops to back it up in the actual adventure.

There are also various new costumes being added in the DLC too. These include some new default costumes for the Isle of Armour or Crown Tundra which match the environment perfectly:

In addition to various others based on other characters from the games. Hmm, that first one certainly gives you Chairman Rose vibes, doesn’t it?

Finally, the Pokemon dens you encounter that start Max Raid battles apparently have an expanded role in the Crown Tundra DLC too, with the player actually being able to explore them properly this time around.

It’s quite the selection, and basically means every major legendary from past generations will be available in Pokemon Sword and Shield soon.

So that’s everything included in the Expansion Pass, and the various updates released to go with it. Either way, the Isle of Armour ‘chapter’ will be available June 2020, while The Crown Tundra will be released sometime in Autumn 2020. The two together will cost $30.

Are you happy to see Pokemon Sword and Shield are getting all this new content? Will new Pokemon, locations and story elements be enough to get you ready to shell out the cash for this Expansion Pass?