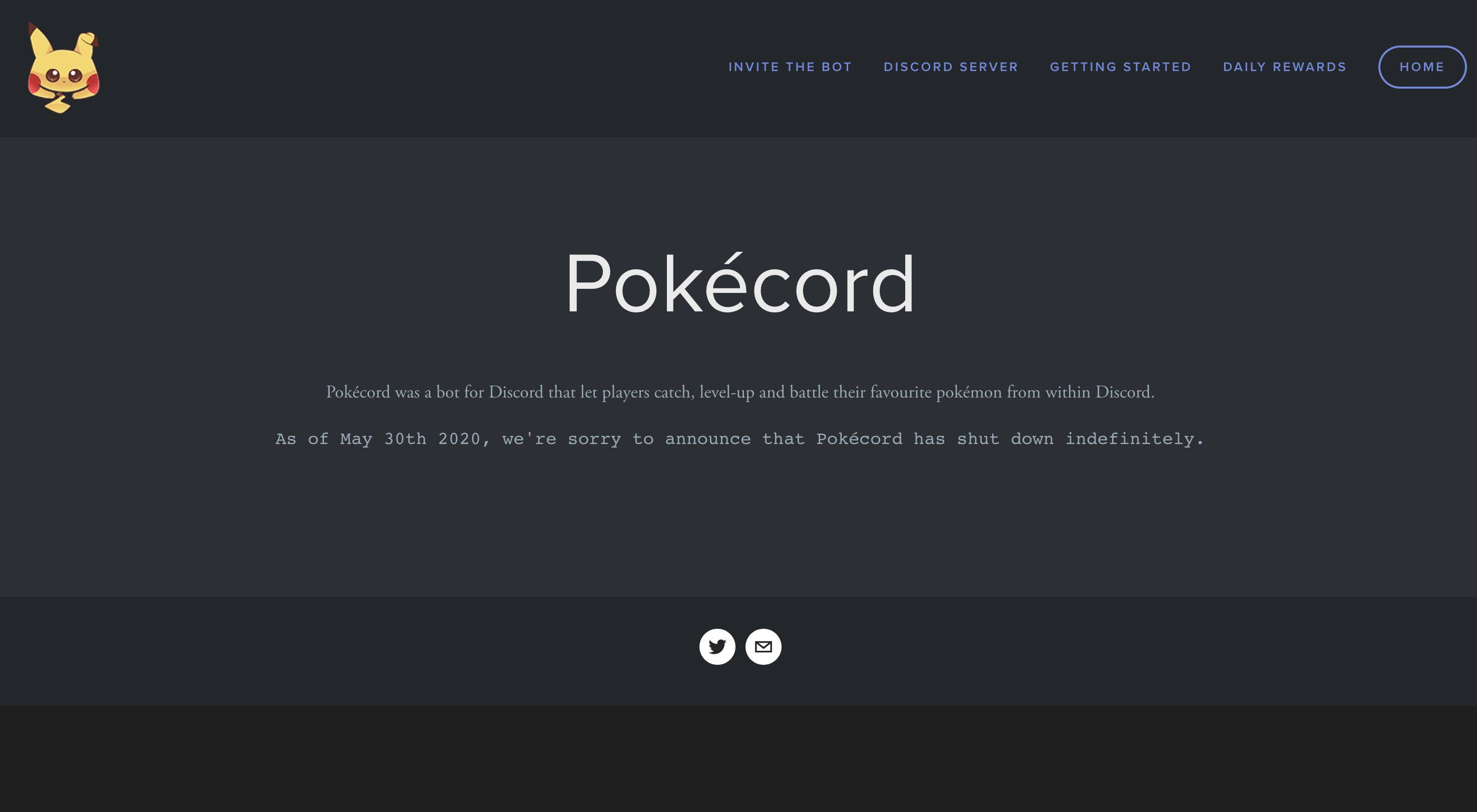 As we’re sure everyone here knows, Discord has taken the gaming world by storm in the last few years. Designed as a service to allow people to host servers or communities for their favourite games and creators, it’s become a replacement for forums and chat rooms across the internet, with many YouTubers using it as their primary means to communicate with their fanbase.

It’s a huge deal, and one which is made even better by the addition of bots. These allow users to do things like play games, listen to music or take in an elaborate roleplaying system without leaving the Discord client.

And one of the most popular of these bots is Pokecord, a bot for catching Pokemon on Discord.

With this bot, players have the ability to catch random Pokemon by typing ‘p!catch [name]’ after their image appears, as well as level up said Pokemon and use them in battles against other players.

It’s a really neat setup, and one which has brought countless hours of fun to people on many millions of servers, ours included.

However, now that’s all changed. Just a few days ago, Pokecord got shut down for good, with only a single message being posted saying the service was shut down due to its creators personal issues.

Here’s the message posted by Miles (Pokecord’s creator) on the official server for the game:

Hey @everyone, I’m sorry to announce that effective immediately, Pokecord is shutting down.

It’s been a wild ride, going from a project I used to learn to code to one of the biggest bots on Discord used by millions of people in almost 1.3 million servers. For this, I’d like to give a huge thank you to everyone who made it possible by playing and sharing the bot with their friends.

Unfortunately this unexpected growth also comes with a lot of added work and stress, and after two and a half years of maintaining and updating the bot, it’s with a heavy heart that I’ve decided to bring it to an end and move on to other projects.

Thank you all once again for joining us on this journey.

As you can tell, it says the bot was shut down due to personal issues, with the stress of running the service being the main reason for its discontinuation.

But many people aren’t buying it, and rightly so.

Because Pokecord’s shut down did not happen like any normal project’s would. There was no warning it was going to happen, no chance to take backups, and no offers to open source the code for other people to continue running it.

And that seems completely crazy for a project that’s this popular. After all, how many projects do you see just get nuked from the internet in five minutes flat?

After being enjoyed by many millions of people on millions of different Discord servers or communities?

Hence many believe there may be more than meets the eye here.

Like say, potential legal issues brewing behind the scenes. That’s because Nintendo’s fan game/project takedowns tend to follow a very similar pattern to this. They strike a project that’s going well up until this point, then the creators basically delete everything and vanish off the face of the Earth, perhaps due to an NDA notice or something similar.

So a lot of people suspect the same thing happened here too, and that Miles only gave the ‘stress/financial issues’ reasoning as an excuse to divert attention from Nintendo.

There are also theories that other legal issues may have been the cause too.

Since the situation with Pokecord is also very much reminiscent of what happened to Project M and Super Smash Bros Legacy XP too. These projects also shut down out of the blue one day, complete with all downloads being removed from their sites and development stopped at the drop of a hat.

However, they didn’t get a C&D from Nintendo (or any other company involved with the series).

Instead, their teams apparently spoke with a lawyer about what Nintendo could potentially do to them if they ended up in court, and immediately disbanded the project based on that.

Hence there’s a bit of speculation that even if an actual take down wasn’t issued, that the same ‘lawyer warning’ scenario could have happened with Pokecord too. That Miles could have gotten in contact with a lawyer about the potential legal troubles brewing for Pokecord, and decided it was too risky to continue based on that.

Either way, it seems unlikely we’ll ever know for sure. Miles is still sticking to his story about personal stress being the cause for the shut down, and no one else on the development team has any more idea what’s going on than the fans do.

So what are your thoughts on this? Do you think Pokecord’s recent shut down really happened due to personal stress or financial problems in its creators life?

Or do you feel some sort of legal situation must have occurred behind the scenes?

Tell us your thoughts in the matter in the comments below, on the Gaming Latest forums or on our new Discord server today!

As usual, Nintendo goes insane at the mere thought of someone making a fan thing. Hell, even mickey mouse had more leeway for fan stuff then Nintendo IPs!

Had to be a C&D. Sw/Sh was having a DLC out in 3 weeks then, and even if it wasn’t a C&D, Miles knew how popular it was and if it was only personal issues getting in his way, he could’ve just handed the bot to someone else to keep running and washed his hands off of the bot (it’s not like he’d continue to profit off of the bot anymore either way). But because it was a C&D, even if Miles did that, he’d still be held criminally liable as its original creator, so the only option is to… Read more »