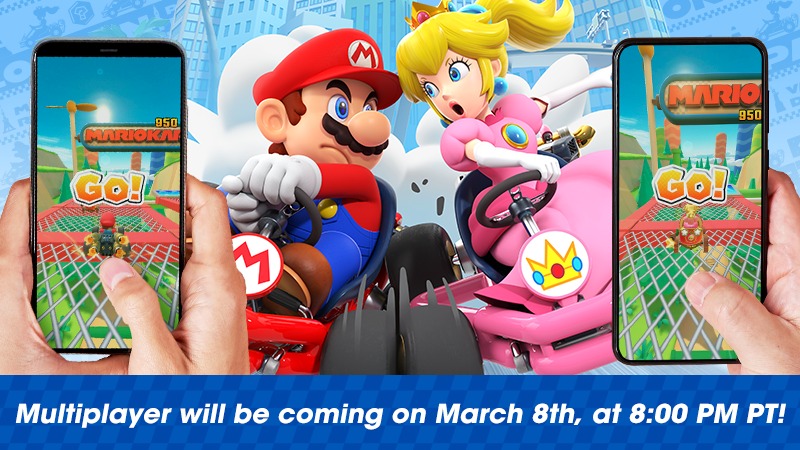 Multiplayer for #MarioKartTour comes out on Mar. 8, 8 PM PT! You can compete against seven other players, whether they're in-game friends, nearby, or around the world. Are you ready to play? pic.twitter.com/IRwBONq560

As well as a second post with some more information on what’s available to Gold Pass/non Gold Pass members:

Race against players worldwide to raise your grade under rules that change daily in Standard Races and Gold Races. When racing friends or others nearby, Rooms let you pick speed, item slot number, and more. Play your way when #MarioKartTour multiplayer launches Mar. 8, 8 PM PT! pic.twitter.com/ckkekAsbHS

Which leaves us with mixed feelings about the whole thing. On the one hand, it’s great to see some form of genuine multiplayer functionality added to the game. Mario Kart is all about the multiplayer gameplay after all, and Mario Kart Tour’s lack of it in the launch game was a baffling exclusion that felt like a missed opportunity for Nintendo. It was like releasing a new Mario Party game focused on single player gameplay. Or a Smash Bros title without a vs mode.

And given the betas were only available to Gold Pass members, it’s great to see that’s not the case here for the final mode. Having a core feature like this locked behind a paywall would make the game seem even more exploitative than it arguably already is.

But that’s the problem with this setup too. Despite the mode being made available to all players now, it’s still got the old ‘freemium’ model written all over it, in a way that hurts it overall.

For instance, 150cc and 200cc are both only available in multiplayer if you own a Gold Pass. Same goes with some of the rulesets, the ranking system, etc.

Hence anyone who doesn’t pay is still getting a stripped down product here.

It feels unfair, especially given the 150cc engine class is in fact available to play in single player with the pass.

Additionally, it also feels a bit too cut back even for paying users. After all, the course selection seems to be really limited here, with the only ones available being those in the current tour. What’s more, they’re not even a full selection either, you get three tracks from a cup in said tour, with the cup being rotated out every 15 minutes.

That’s pretty disappointing if you ask us. Mario Kart games prior to this one always had a lot more variety on the track front, and the fact you could choose from any in the game kept it more interesting overall. Imagine if Mario Kart DS or Wii or 8 went with this kind of setup. Fans would be livid about it, and rightly so.

So it’s a mixed bag overall. It’s nice that it exists as a feature, and it’ll probably be quite fun to play come March 8th. But the way it’s implemented is also really limited, and just makes it super clear that non Gold Pass members aren’t Nintendo’s favoured customers with this game, with a setup that locks even otherwise available features behind said paywall.

Still, what are your thoughts on it all? You happy to hear that multiplayer is coming to Mario Kart Tour? Is it something you’ll try out yourself come March 8th?

Tell us your thoughts in the comments below!