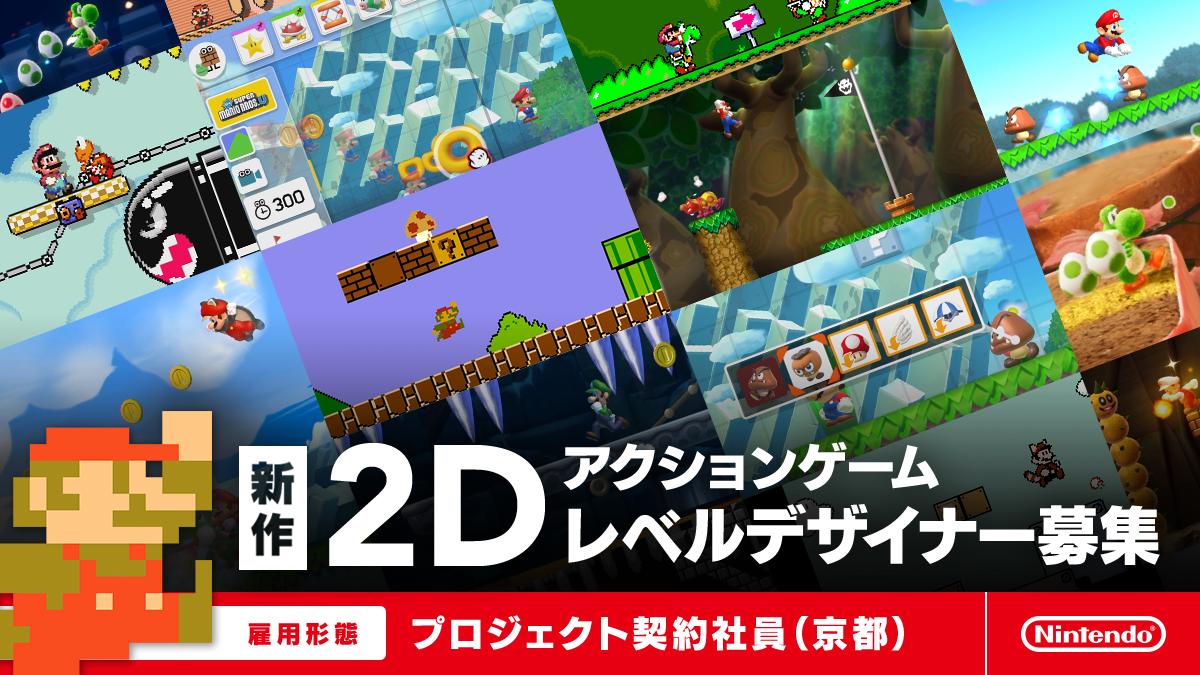 These both advertise level design roles at the company, with the design work in question involving 2D and 3D games respectively.

And they’re pretty clearly both about working on Mario games too. Why? Well there are two reasons really.

First and foremost, the imagery is obviously very Mario focused. The collage of screenshots included in the 2D level designer ad consists entirely of Mario platformers, and the icon used for the 3D level designer ad prominent features Mario in a more modern style too. So that’s the first clue.

But the second (and perhaps smoking gun here) is the location given for the jobs. Basically, the two roles require the candidate to work in Kyoto and Tokyo respectively.

Which for those who haven’t kept up with Nintendo development teams, points to them being with the Kyoto and Tokyo divisions of Nintendo Entertainment Planning and Development, the creators of the 2D Mario and 3D Mario platformers respectively.

So yeah, Nintendo’s clearly hiring people to work on future Mario platformers. But what could said games be like anyway?

Well for the 3D side, it’s almost certainly going to be Super Mario Odyssey 2. After all, the original has sold 15 million copies since its release in 2017, and became one of the best selling games on the Nintendo Switch. It’s a complete no brainer to make a sequel to it at this point, and it’s likely Nintendo’s been working on one for a while anyway (especially given the lack of major DLC released for the title).

Yet the 2D one isn’t quite as obvious. Why? Well, it’s for a few reasons really. For starters, Super Mario Maker 2 has kinda obsoleted most of the New Super Mario Bros series, and made a new game in said style a harder sell than it would be otherwise. Hence in that sense, it seems the obvious idea of a ‘New Super Mario Bros Switch’ may not be on the table this time around.

However, at the same time, it’s quite hard to imagine Nintendo going all Sonic Mania like and coming up with a true sequel to the NES/SNES era classics either. It’d be lovely to see, but it feels rather unlike them given how bland the rest of the NSMB esque games have been since they started in the early 00s.

So it’s hard to tell. Might somehow be another New Super Mario Bros title, might be something completely new, might even just be Mario Maker 2 DLC or something.

Either way, it’s going to be interesting none the less, and we definitely advise anyone with any game design experience to give the application a shot. Who knows, you might end up being credited on the next Super Mario World or something!