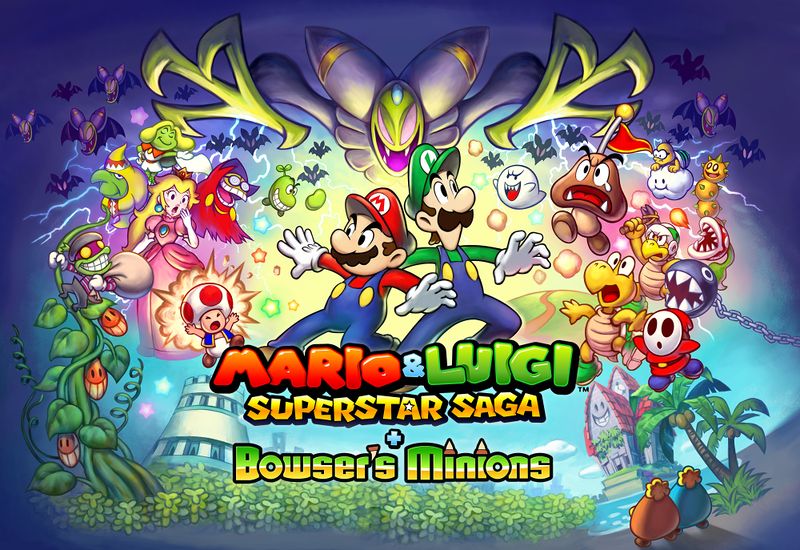 AlphaDream, the developer of the acclaimed Mario & Luigi franchise, have filed for bankruptcy. This news comes from Yahoo Japan, who mention high levels of debt and disappointing revenue numbers as the reason for the closure, with the former being at about ¥465m ($4.3m) as of March 2018.

It’s a sad end for such a well loved company, especially one who’s brought us some of the best RPGs of all time in their nearly two decades of work on the Mario & Luigi series.

However, it’s also unfortunately not a surprising one. Why? Because as many people have pointed out over the years, the company’s work has exactly done well on a commercial level in the last few years or so.

With Mario & Luigi Paper Jam being the first example. That title sold only about 1 million copies worldwide since its release in 2015, and performed incredibly poor given the brand name involved.

And even that was better than the titles that followed. Because despite being remakes of the most popular games in the franchise (Superstar Saga and Bowser’s Inside Story respectively), they also underperformed at retail.

Massively we may add.

Superstar Saga + Bowser’s Minions failed to break a million copies, and Mario & Luigi Bowser’s Inside Story + Bowser Jr’s Journey was one of the worst performing Mario titles to date, with sales estimates of about 80,000 copies being commonplace. It was all downhill for the company at that point, especially given 2018 was when their debts hit the highs mentioned in the intro.

And the games show it too. Paper Jam is about 60% recycled assets from Dream Team, whereas the remakes recycle as many enemy and object sprites as they can from the same. It’s even why the uniqueness has been toned down, with enemy sprites being edited from modern versions and certain enemies (most notably Mecha-Chomps) being removed altogether.

Add to this the numerous bloopers the later games have (like wrong names, animation errors and recycled models from outside the series in Bowser’s Inside Story DX) and its clear resources and manpower was getting more and more strapped as the company wound down).

Here’s an interesting translation error for @SMWikiOfficial and @MarioBrothBlog to look into.

In the Bowser’s Inside Story remake for 3DS, Dieter from the BFF refers to Kaley as ‘Leana’, which seems to be the characters name from earlier in the game’s development/localisation. pic.twitter.com/GuBt9FRY0U

Something had to give there, and eventually that something was the development company itself.

Still, even at their worst, AlphaDream did do a good job. The later Mario & Luigi games may have been rush jobs with technical and artistic problems, but they were good games none the less, and on a better performing system, probably could have been blockbuster successes.

Problem was, they were released on the 3DS instead. A system which by all accounts was dying in 2015, and dead as a doornail by the time Bowser’s Inside Story DX rolled round. In fact, it was so dead at that point, that Nintendo themselves apparently gave up on development for it when the figures for the former came in:

Yikes, sad to hear about Alpha Dream. The Mario & Luigi games were on a decline – a source once mentioned to me that this year’s Bowser’s Inside Story remake sold so badly that Nintendo axed other 3DS plans due to it.

Yet AlphaDream (or Nintendo) pushed them to make games for it, and they went down about as well as a lead balloon. AlphaDream stuck by a dying system, and said system just took them down with it.

And their problems didn’t end there either.

No, there were apparently quite a few issues with the company at the time. For one thing, they were trying to get into HD game development at the time too, with word on PS4 and Nintendo Switch titles going around at the time.

Unfortunately, said development requires far more resources than 3DS game development ever did, and it’s likely said resources were ones AlphaDream were unable to provide.

Which in turn likely added to the company’s growing debts, restricted resources for the games even more and left everyone in a predicament with no easy way out.

They had to grow bigger to survive a changing market, and just couldn’t do so quickly/well enough to survive.

So that’s why they failed. But what’s next for them? What could happen to AlphaDream’s characters and work now the company is heading into bankruptcy?

Well, isn’t that a tough question to answer?

On the one hand, it’s entirely possible that the series will continue under a new development team, or that the team behind the original will just come together under a new brand name. After all, that’s what happened with Artoon, who got reborn as Arzest after the former’s parent company bit the dust.

And given the similar situation with Hudsonsoft and Nd Cube, it’s also possible the new company might either get bought by Nintendo, or brought on as an internal team, providing a way to keep the series going even after the original studio’s seeming closure.

So there’s a possibility the company will come back in all but name. Or that someone else will get the chance to work on the Mario & Luigi series from here on out.

There’s also the possibility the characters and settings will just get integrated into other Mario universe games too. Since after all, Nintendo do own the rights to it, and they’ve got no reason not to use it for other games in future now too.

Caption: You do realise what this text means right?

Or perhaps they won’t. While Mario & Luigi as a series did well in the past, the later games not doing too well may be what gets Nintendo to give up on the series altogether. To stick the metaphorical fork in and consider it done for.

Which in turn would be a depressing, yet not entirely unexpected fate. Nintendo isn’t the kindest company in the world to poor selling franchises, and with the likes of Chibi Robo, Advance Wars and F-Zero not seeing games for years now, it’s all too possible Mario & Luigi could go the same way.

Still, all we can do now is wait and see why happens. Hopefully it’s the former outcome, and the people who worked on the Mario & Luigi titles get a chance to work on new ones in future under a new company instead.

Goodbye AlphaDream, whatever happens, you will be missed.