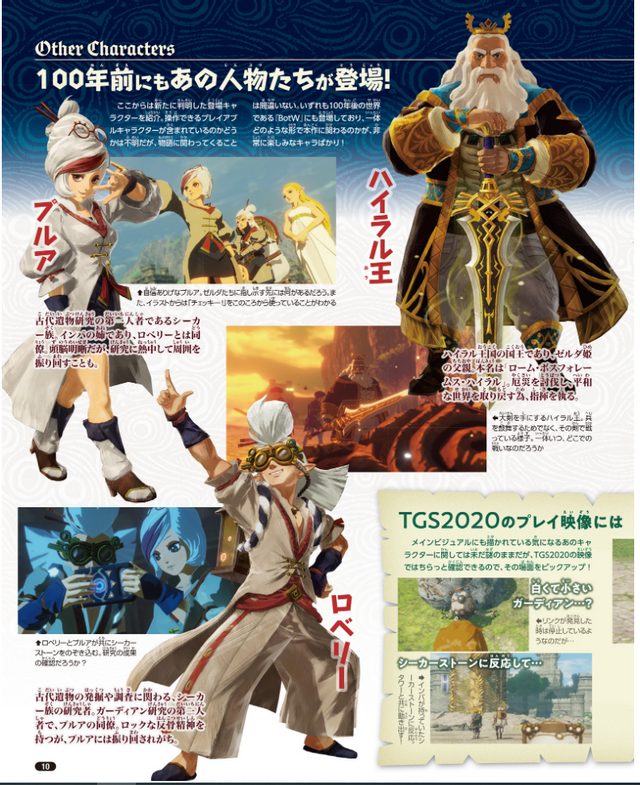 Well, this is a pleasant surprise isn’t it? Right after a new trailer featuring Hestu, we get to see even more Hyrule Warriors: Age of Calamity media posted online. This time, magazine scans from Japanese magazine Nintendo Dream featuring new artwork of all manner of characters from the game!

Here are the scans in question:

As you can see, we’ve got the usual artwork for the Champions, Link and Zelda. That’s all well and good.

But we’ve also got artwork for the tech lab scientists, King of Hyrule and Hestu too. And it’s the king that’s the most interesting one here.

Why is that? Well, think about it like this. When is the last time Nintendo hinted at King Rhoam being playable in Age of Calamity?

The answer is never. Up until now, he’s always been treated like a background character. An important one for sure, but someone who plays a supporting part at best.

Yet this new scan completely throws that into doubt. Now not only does the king have new artwork in the style of the other playable characters (and hinted to be playable ones), but he’s also shown wielding a weapon and glowing with the type of power used by Zelda in cutscenes. This implies he might play a much more active role than otherwise thought, and could well have been as much of a ‘badass’ as Link, Zelda or the other Champions were.

Plus it’s not as if the weapon is reserved for the artwork either. No, in the one picture we see of the king in game, he’s wielding that Royal Claymore like he’s about to personally fight Calamity Ganon with it, looking way cooler than any king has the right to be in the process. So yeah, it seems like there’s a good chance the ‘ol king might not go down without a fight after all…

And the same goes for the other characters only previously implied as playable too. Purah, Robbie, Hestu, Master Kohga… the magazine itself may say they’re ‘unconfirmed’ as playable warriors, but the artwork and screenshots chosen certainly make it seem like their role in the story is more than a supporting one.

Meanwhile, the pages for Link and the Champions provide some interesting tidbits about the game too. Like how Link is showing wielding all manner of weapons from Breath of the Wild, including a comically oversized Golden Claymore and a Rito made Feathered Spear.

How the Divine Beasts seem to be active in the game in some form or another (before Ganon takes them over).

Or how the Korok seemed to be triggered via similar means to the ones in BoTW (like touching a yellow flower or lifting a rock).

So yeah, check out the scans above and see what you can find, then thank Vaxis7 from the Age of Calamity subreddit for his hard work providing the images. There’s a lot to see here, and a lot that should please even the toughest of Zelda critics.